Monsieur Macron is a great scientist. He knows a lot about geopolitics 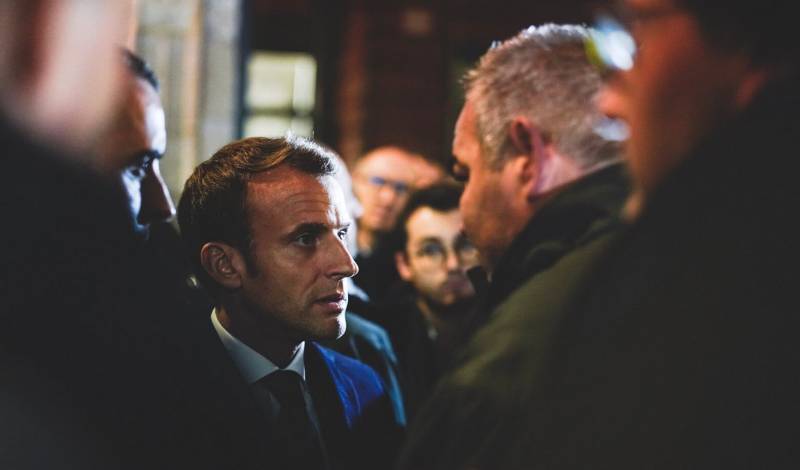 The Economist, a British magazine, has published a lengthy interview with French President Emmanuel Macron on European geopolitics. For the head of the Fifth Republic, this topic has recently become a priority. Not really understanding the problems of his own country, Macron persistently and self-confidently promotes the ideas of a new world order, claiming at least to be the leader of modern Europe.

In the "mouthpiece of the financial aristocracy"

His role, however, turned out to be unclaimed by Europeans. Their united union, mired in economic and political contradictions and conflicts, began to divide into a rich North and a poorer South, a globalist West and a nationally oriented East. In these conditions, Europe is not up to the projections of Emmanuel Macron, who is trying not only to glue the construction of the European Union that is cracking at the seams, but also to become the banner of the Old Continent.

It must be admitted that a certain “pluralism” in the head of the French president contributes to the immunity of Europeans to Macron’s ideas. Macron’s new, seemingly progressive proposals, such as a common budget and the introduction of the post of Minister of Finance of the Eurozone countries, the creation of the joint armed forces, etc. (made earlier in his speech to the Sorbonne students), are in sharp contrast with others - frankly alarmist.

It’s enough to recall Macron’s statement “on the crisis of a market economy invented in Europe”. According to the French leader, it has gone astray and has become an economy of accumulative capitalism. So Macron spoke at the end of August at the annual conference of French ambassadors at the Champs Elysees. That speech of the President of France, the local media plucked into quotes and put them in the headings of their publications. More often than not, the sentence of Macron was voiced by ELYSEE: “We are definitely witnessing the end of Western hegemony in the world.”

Probably, such a scatter of concepts, and especially the conclusion about the degradation of Western civilization, did not suit those who made the French bank clerk, Rothschild Emmanuel Macron, president of France. It was then that the British journal The Economist, closely associated with the banking house mentioned above, entered into business - a multi-year publication history. Karl Marx also called him "the European mouthpiece of the financial aristocracy." Since then, little has changed, except that the publication has become somewhat weary, balancing between global financial ambitions and traditional Labor views.

Mobilized to support Macron, The Economist, on the one hand, exposed his shoulder to the geopolitical philosophy of the French leader. On the other hand, he gently corrected Macron’s position, with skillful questions from professional interviewers asked her the necessary “financial aristocracy” orientation, including anti-Russian one.

Russia in options and without ...


It is necessary to dwell on it in more detail. The star of our Foreign Ministry regarding foreign policy comments, Maria Zakharova, praised Macron’s interview very positively, calling him “a reversal towards common sense.” It remains only to envy the sagacity of our diplomats who saw "common sense" in the classic Western propaganda set, which was revealed to the readers of The Economist by the French leader.

“I look at Russia,” Macron tells readers of a popular publication, “and I wonder what strategic choice the country has the size of a continent, with a huge territory. Whose population is decreasing and aging. Whose GDP is comparable to Spanish. Which is re-arming twice as intensively as any other European country. Against which were introduced legal sanctions for the Ukrainian crisis. And, in my opinion, this model cannot be considered sustainable. Russia carries out excessive militarization and multiplies conflicts, but has a number of internal problems: demography, economics, etc. ”

After such a long passage of sanity, Emanuel Macron straightened his shoulders and, as if trying on himself under the Kremlin cabinet, hit into the discussion about Russia's strategic choice, proposing three options at once. The first is to restore the superpower on their own. According to Macron, this is an unrealistic path due to its extreme complexity. Since the current political and ideological models in Russia are implicated "on ethnic conservatism, which does not allow Russia to pursue a migration policy."

From this conclusion: since the Russians themselves will not be able to restore their sovereign greatness, then other paths should be chosen. For example, the Eurasian model. That is, to lean toward China, recognizing its dominance in relations. Macron does not believe that such a choice will suit Russia and offers a very win-win option - “restore a policy of balance with Europe. Gain her respect. ” After that, the Europeans “without a shadow of naivety” will rethink their strategic relations with Russia, “while remaining tough on the Minsk process and everything that happens in Ukraine.”

Europe has lost the "guarantor of last resort"

It's funny that, having trampled on Russia, Macron calls her to Europe, the end of the hegemony of which he himself announced to his ambassadors in August. It seems that the Frenchman simply wants to correct Europe’s shaky position at the expense of Russia. Moreover, in an interview with The Economist, the degradation of the old woman of Europe is disclosed in sufficient detail. Macron speaks of the “incredible vulnerability of Europe”, which is today experiencing a whole bunch of economic, social, moral and political crises.

Macron does not reveal the reasons for the main thing in this series - the economic crisis. Which is understandable. After all, then one would have to go into the field of interests of a close to him “financial aristocracy”, which plunged the world into a deep debt hole, but due to financial manipulations (which is just the story with derivatives!) And speculations that multiplied capital and strengthened its influence and power.

Nevertheless, a number of derivatives of the economic crisis in the interview were still named. It is noted that a change in budget policy and an increase in taxes have dealt a serious blow to the middle class. Macron considers this a great historical mistake, which is true. Indeed, the economy is largely supported by the middle class, its growth and development is determined. Moreover, the controllability and well-being of any country depends on the social health of this class.

Macron was also concerned that "Europe has lost the thread of its history." Developing this thesis, he noted that Europe united on the priority of two important elements - coal and steel, because of which countries of the continent had previously fought. Then the community grew into a political project, where the elements of solidarity, unity of values, goals and political thought became priority.

Now Europe is again gradually turning into an ordinary "market, the ultimate goal of which is expansion." This circumstance violates the unity of political goals not only in the community, but also in individual countries that are now governed by "coalitions with a vulnerable majority or a precarious political balance." As an example, Macron named Germany, Italy, Spain, Belgium, Great Britain, France. Only countries (Hungary and Poland) who "turned their backs on liberal democracy and decided to act much tougher" avoided such a crisis.

To all these troubles was added the main one. “We,” says Emmanuel Macron, “first encountered the President of the United States, who does not share our idea of ​​a European project ... The guarantor of last resort (USA), the shield that made Europe stronger, no longer maintains its previous relations with Europe.”

After such a depressing statement, the French leader builds his vision of the future of Europe. First of all, he advocates the strengthening of European defense, the development of the so-called “European initiative of military intervention,” about which Macron first spoke two years ago in the Sorbonne. (Today, nine European states have already joined it.)

The second important direction for the development of Europe should be an increase in investment. Moreover, both on the continent itself and beyond. As an example, the French president cited Africa, with the leaders of which he is now establishing relations. Where can I get funds for this? There is no need to think for a long time, it is enough to abandon the strict budget requirements. ("The US has widened the deficit for investment.") And after that there will be happiness. Technology development will begin, sovereignty will be strengthened, integration with neighbors will expand, ideas of humanism, liberal values, etc. will receive a new impetus.

In general, glory to Emmanuel Macron! According to him, "the European agenda has been dictated from the outside for many years." Now its new version is being promoted by the French president in person. Only here, to realize these ideas, a unity of political thought and the will of the leaders of the countries of the European community is needed. But he is not in the foreseeable future is not expected. Such an unpleasant truth today. She gently crosses out all the geopolitical considerations of Emmanuel Macron, who shared them in such detail with The Economist ...