ZIL-131: the workhorse of the Soviet Army 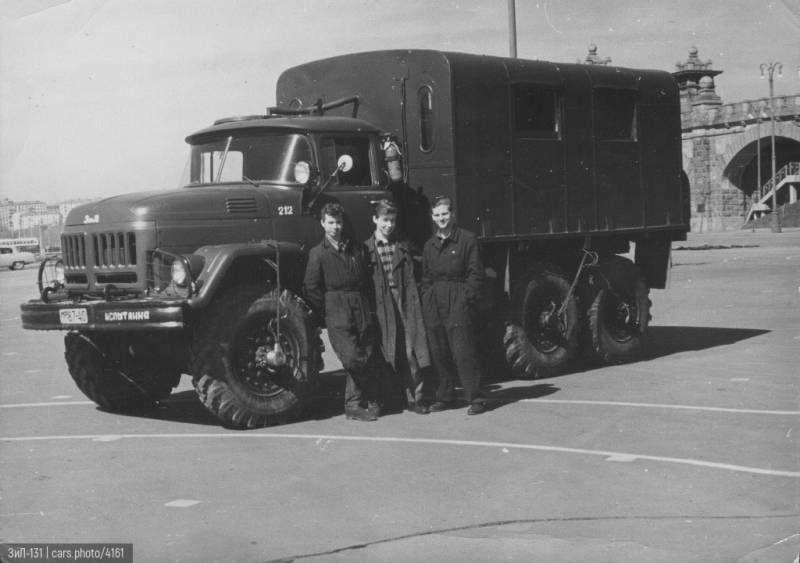 In the book of Yevgeny Kochnev, “Cars of the Soviet Army 1946-1991”, the idea of ​​the influence of American REO M34 trucks on the design of the domestic ZIL-131 is presented. Even if this is so, then in the Soviet Union they chose a good option to follow. Work on the American car ended in 1949, and a couple of years later the truck went into the army. The all-wheel drive three-axle M34, along with numerous modifications, has become one of the most common vehicles in the US Army and received the nickname Eager Beaver, or "Conscientious" for unsurpassed reliability. The appearance of the truck did not differ in grace (as, indeed, for all American wheeled vehicles), the cab was generally open, but the gearbox had 5 steps with synchronizers, and the overhead 6 cylinder engine developed quite decent 127 l. from. The M34 carrying capacity on unpaved roads did not exceed 2,5 tons, and the hard surface under the wheels made it possible to load up to 4,5 tons. 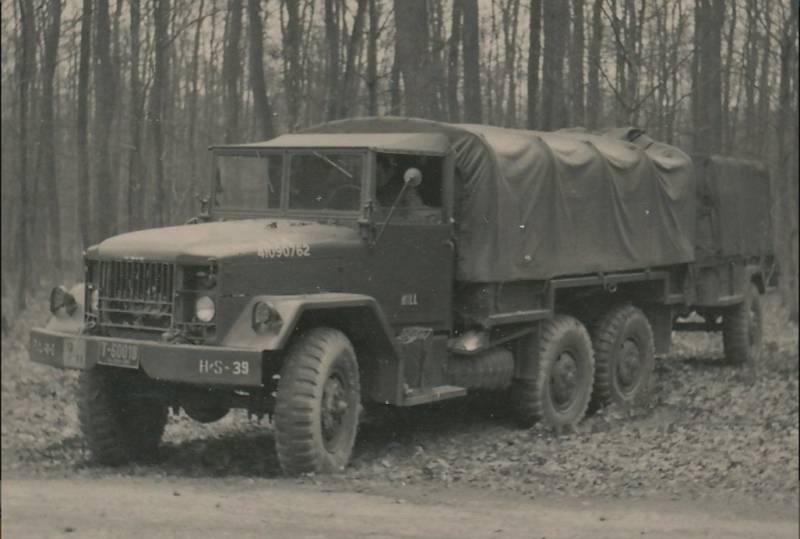 "American" M34. Perhaps it was his motives that were used to create the ZIL-131

In the USSR, the direct predecessor of the 131 machine is not the most successful ZIS-151, which, in turn, leads history from the Lend-Lease Studebaker. In addition to a weak engine and a large mass, an important drawback of the truck was the gable tire of the rear axles. On the one hand, this was demanded by the military in pursuit of greater carrying capacity, and on the other, it severely limited the car's ability to pass through soft soils and snow virgin lands. When the legendary ZIL-157 appeared in the army, there were also claims to it in terms of low payload and weak traction capabilities - it was not suitable for the role of an artillery tractor. It was for the artillery units in the middle of the 50's that they began to develop the ZIS-128, which, incidentally, had a lot in common with the previously mentioned "American" M34. 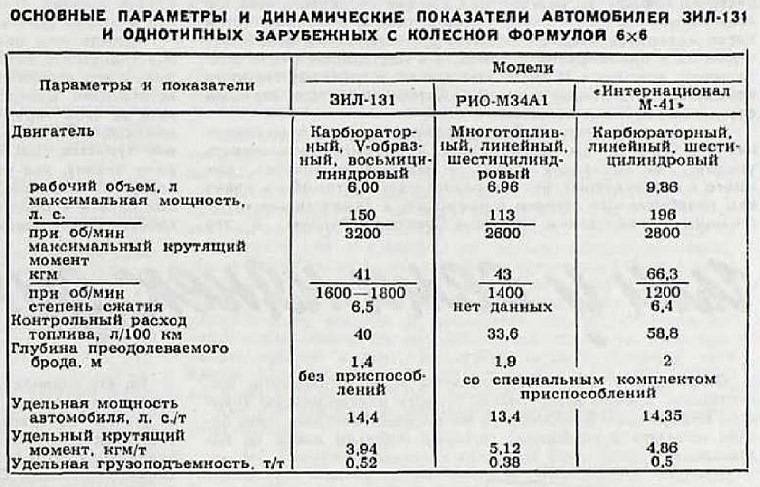 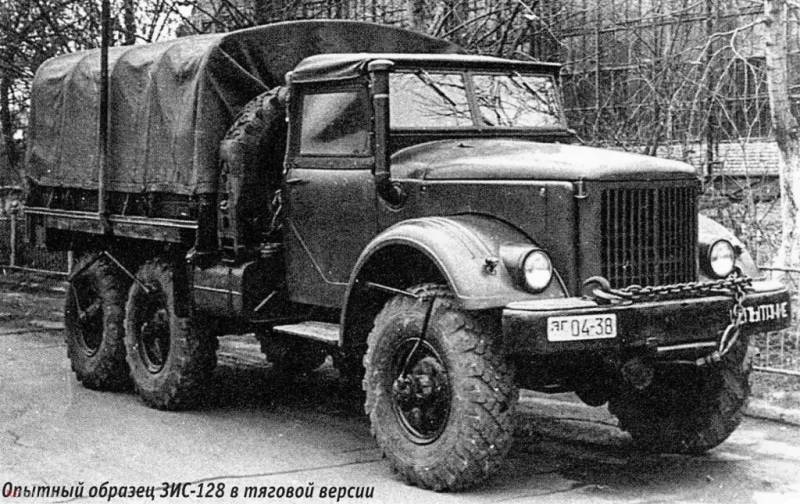 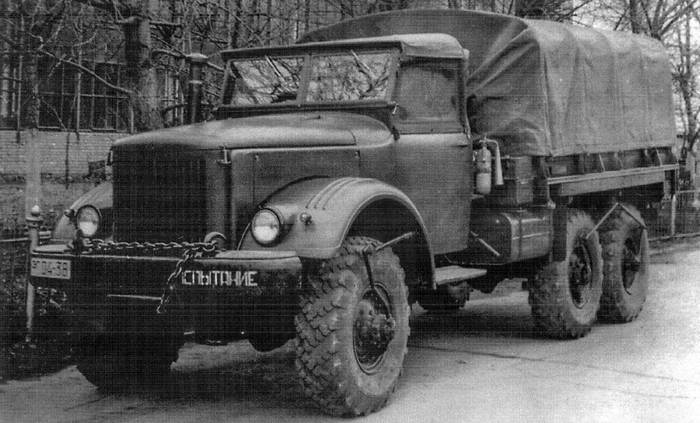 ZIS-128 in traction version for artillery 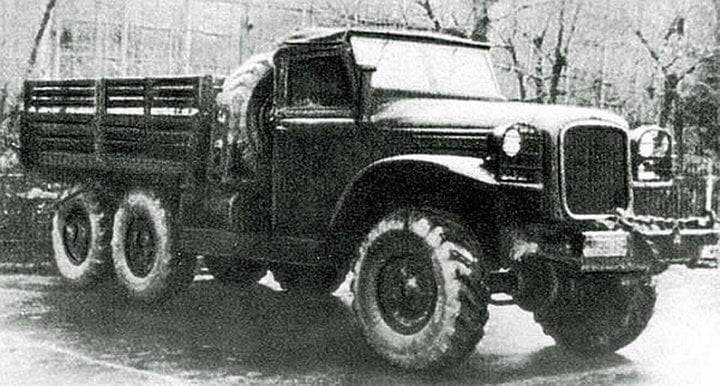 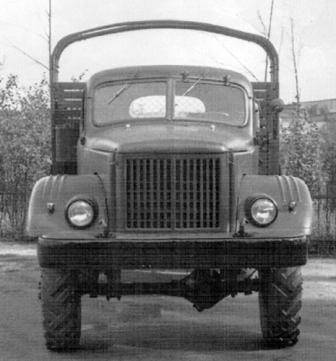 In the original version, the car was called ZIS-E128V, but with the first prototypes stopped at the ZIS-128. This car was not actually a continuation of the ZIS-151 line, it was distinguished by a new transfer case, gearbox, centralized tire inflation system and other details. The loading platform was lowered down to reduce the center of gravity and simplify unloading / loading of ammunition. History has not preserved for us a single instance of that experimental machine, but in the photographs the trucks are presented with at least three cabs, of which only one is all-metal. It is worth remembering that the experienced ZIS-128 appeared almost simultaneously with the first "classic" ZIL-157 machines. Such paradoxes of design work within one plant were explained by the requirements and the pickiness of the main customer in the person of the Ministry of Defense. There was another analogue of the future 131 machine - ZIL-165, which was a hodgepodge of various units, in particular, the cab was from 130. According to one version, it was the cramped cabin, as well as the weak in-line 6 cylinder engine, that caused the military to refuse this design in the 1957 year. At that time, everyone was already aware that a new engine with a power of one and a half hundred horsepower was required for a new car. But he was gone. 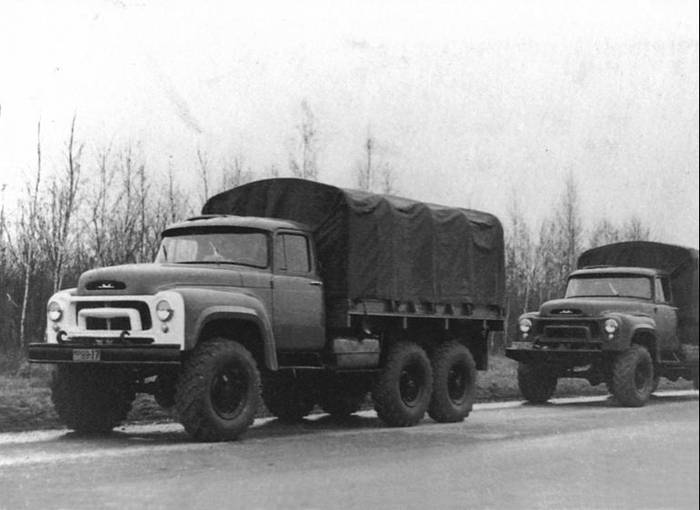 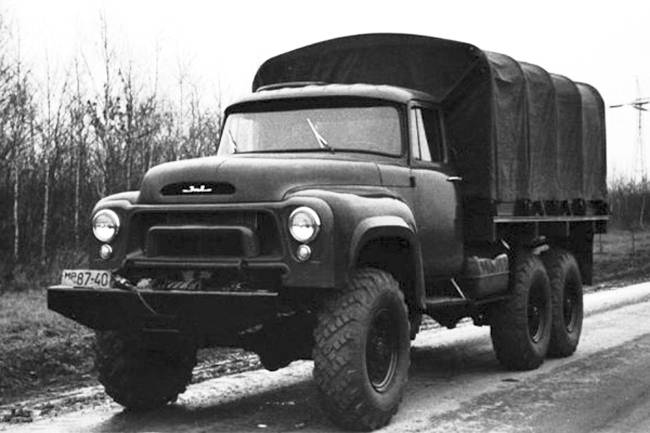 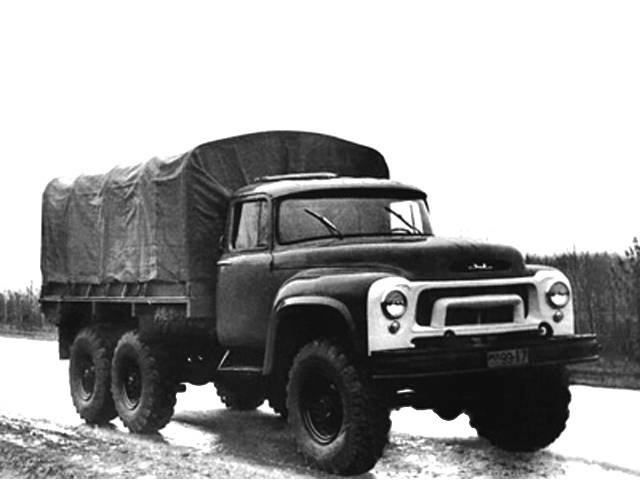 Due to starvation in 1958, the military wrapped up the ZIL-131L prototype (not to be confused with the ZIL-131L timber carrier that appeared later) with an experimental V-shaped 6-cylinder engine with 135 l capacity. from. The car was distinguished by a steel cargo platform with low sides and conical rims.

The first prototypes with the 131 index

The first ZIL-131 cars appeared at the end of the 1956 year and at first they were equipped with 6-cylinder engines, which were subsequently replaced by V-shaped "eights". It was supposed to develop the car in two versions - ZIL-131 for artillery and ZIL-131A for transport needs of mainly motorized rifle troops. 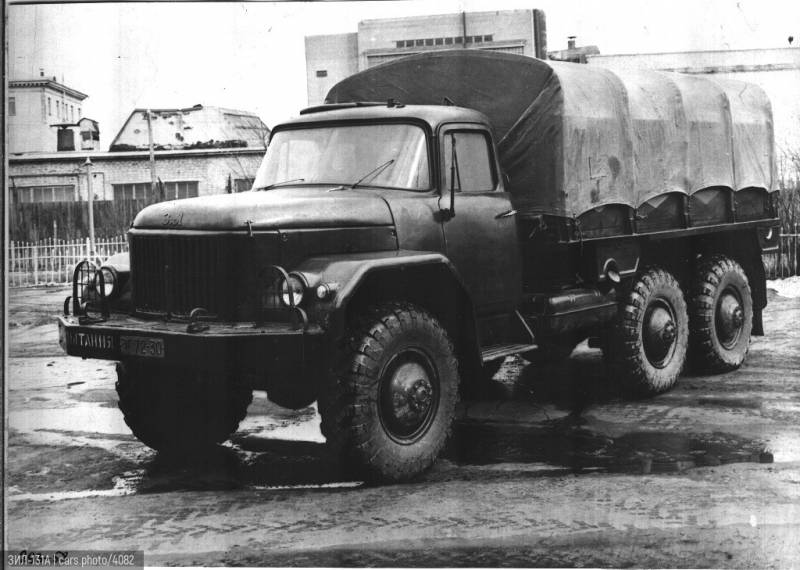 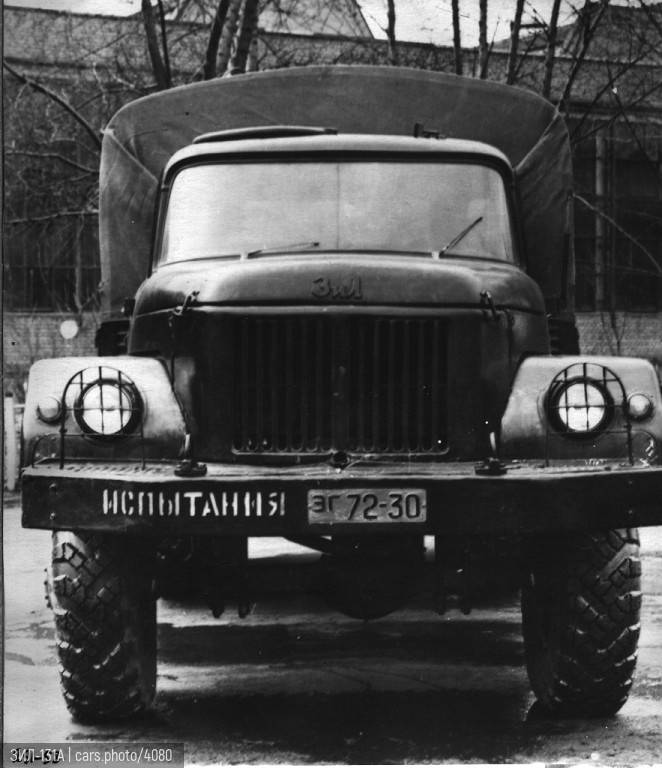 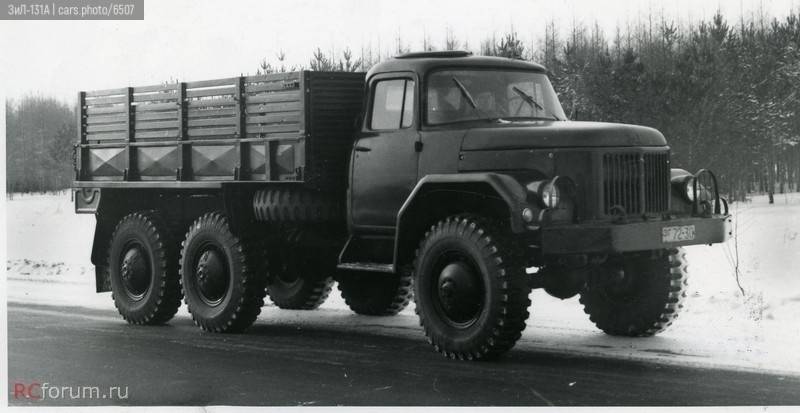 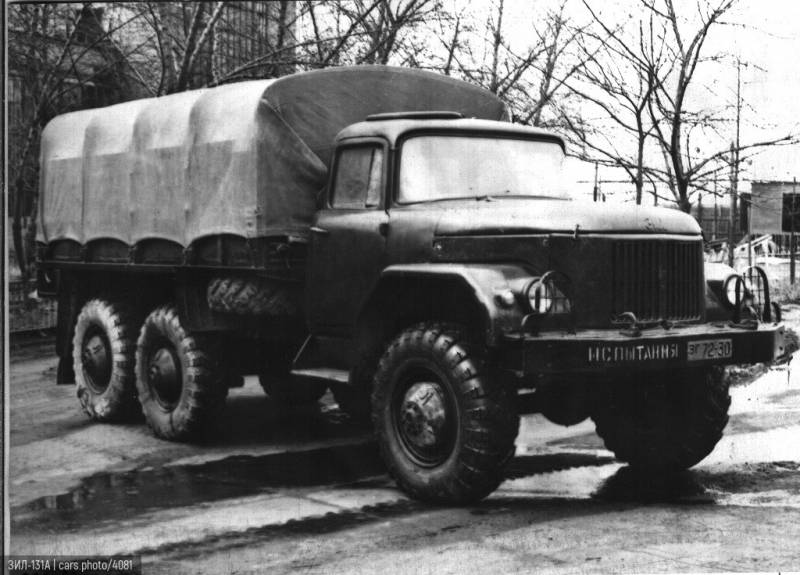 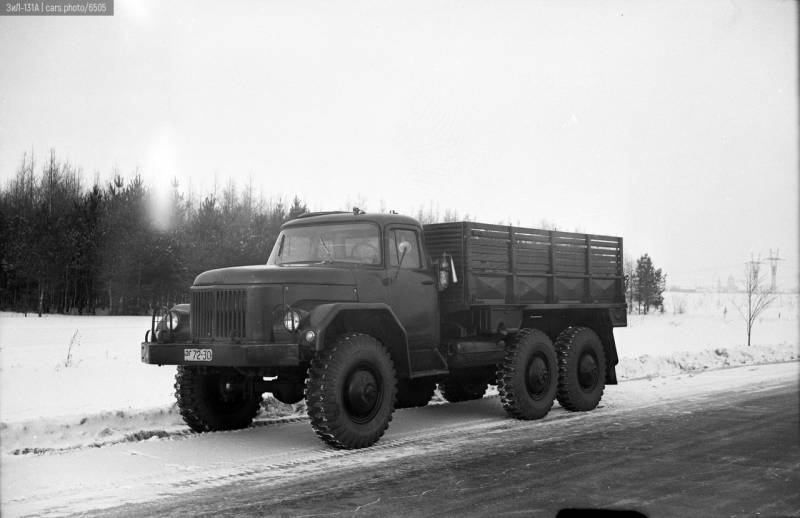 In fact, ZIL-131 was not originally planned for widespread use in the ground forces - he was preparing a career mainly for an artillery tractor. At that time, there was a ZIL-157 “Cleaver” in the army, which, according to most parameters, suited the military. That is, the 131 machine was not supposed to replace any equipment, but was originally an independent niche development. Perhaps that is why there was no particular urgency with the adoption of the machine. ZIL-157, by the way, was collected before the 1991 year, although to a greater extent it was not for the army. But the manners and strategies of the Ministry of Defense of the Soviet Union in those days were variable, and as a result, the ZIL-131 turned from an artillery tractor into a multi-purpose truck. 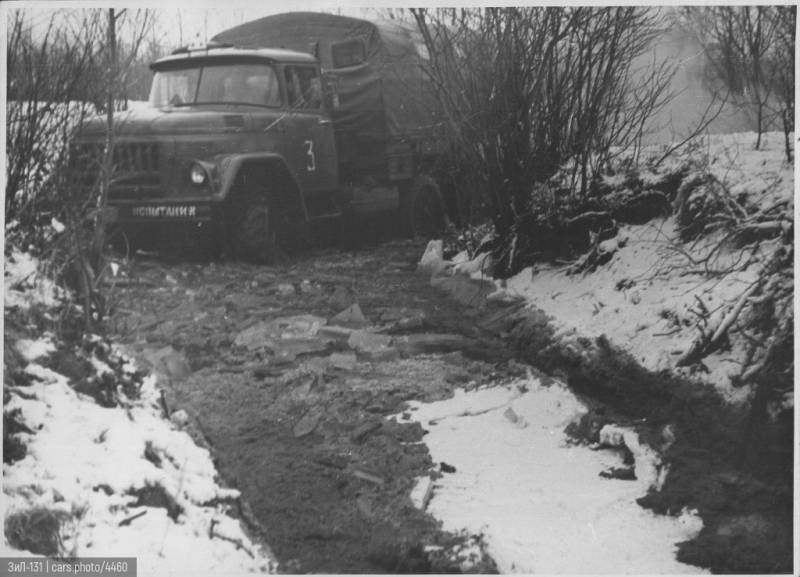 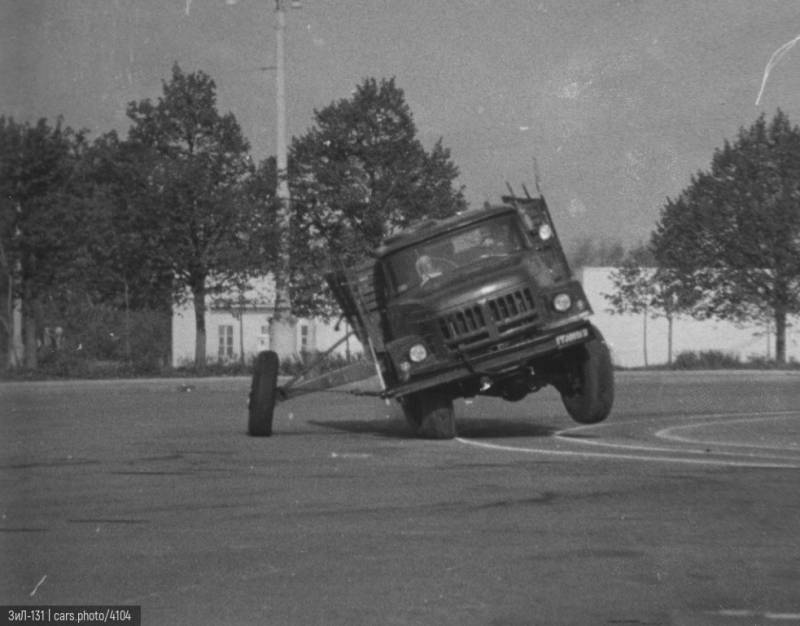 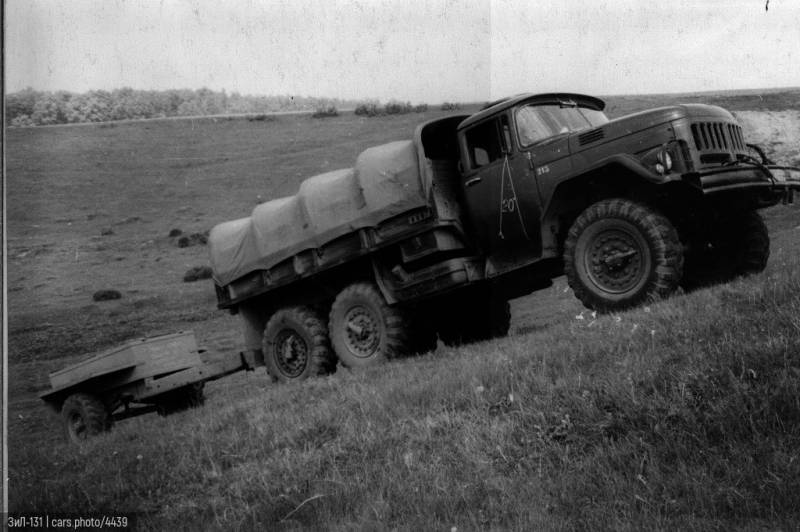 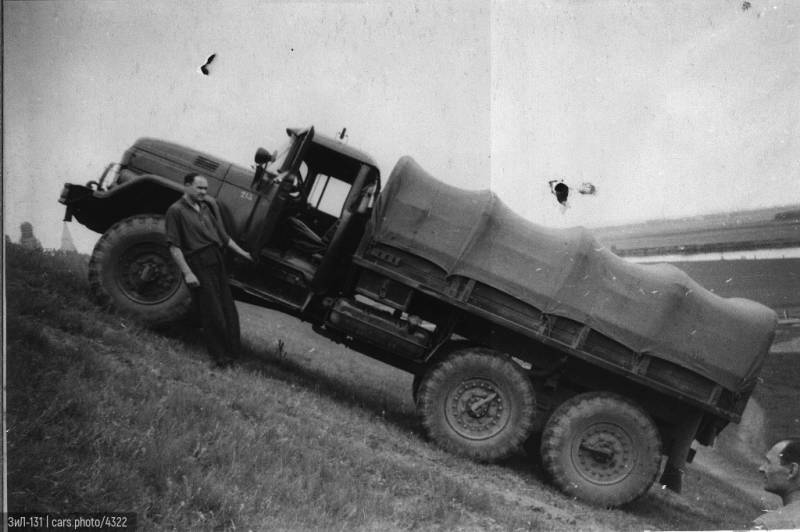 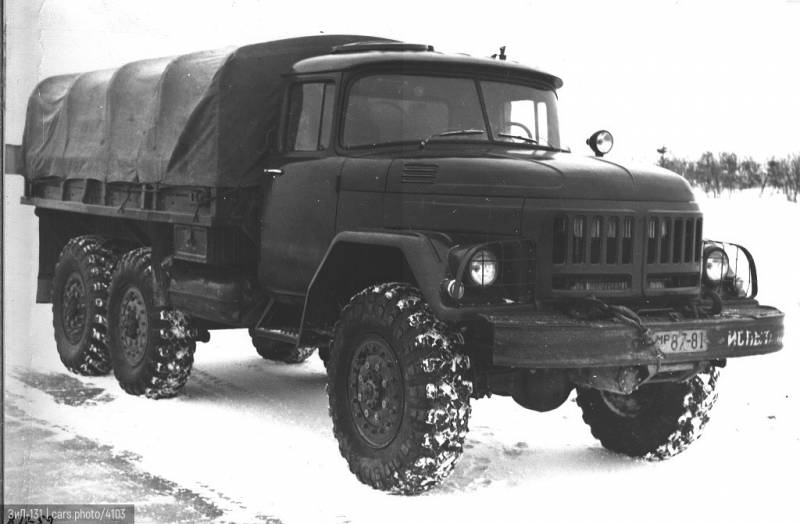 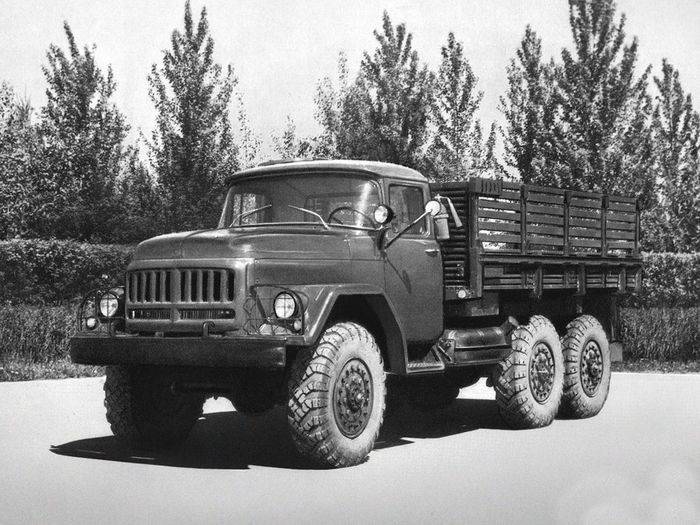 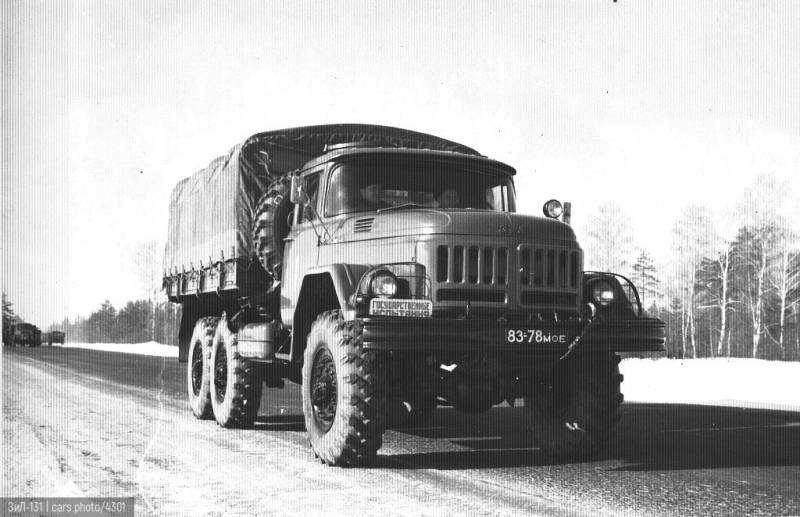 History will show that in terms of the number of possible use cases, a three-axle all-terrain vehicle from Moscow will be almost the most popular in the Soviet Army. In total, six prototypes were built at the end of the 50's, including transport, traction models and even one truck tractor. After preliminary tests by the year 1960, the factory workers presented the seriously modified trucks to the military. Compared with the “Cleaver”, the ZIL-131 was more economical, it took more cargo, but was somewhat inferior in cross-country ability. The publication "Autolends of the USSR" also mentions that the military identified an excessive mass of prototypes, insufficient ground clearance and low mobility - no more than 1,2 meters at the required one and a half meters. At ZIL, the flaws were corrected by July 1960, but repeated tests revealed a tendency to skid due to an unsuccessful tread pattern and unsatisfactory operation of cross-axle limited-slip differentials. After eliminating these shortcomings and modernizing the shielded electrical equipment, military specialists left for further work the only version of the future truck in the transport version. It was decided to abandon the artillery tractor. 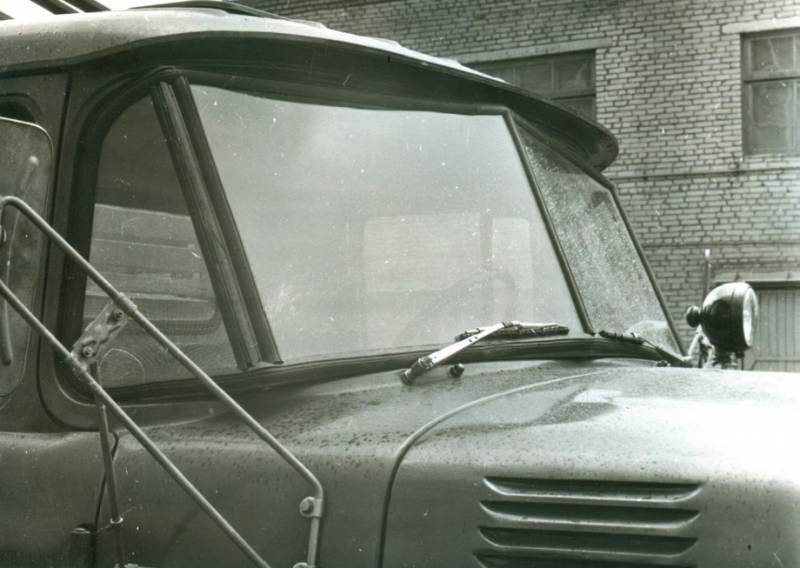 An experimental version of the ZIL-131 windshield. Flat glass made it possible to quickly change broken sections and, most importantly, in the future you could think about booking 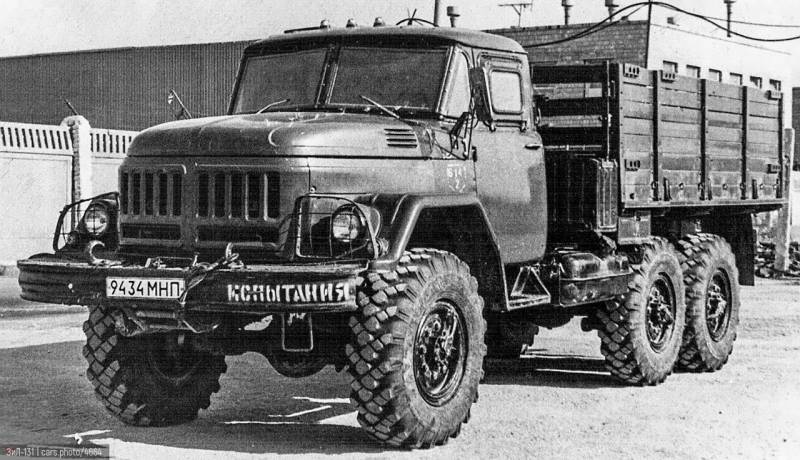 Another version of ZIL-131 with flat glass and a sealed cabin, 1983 year 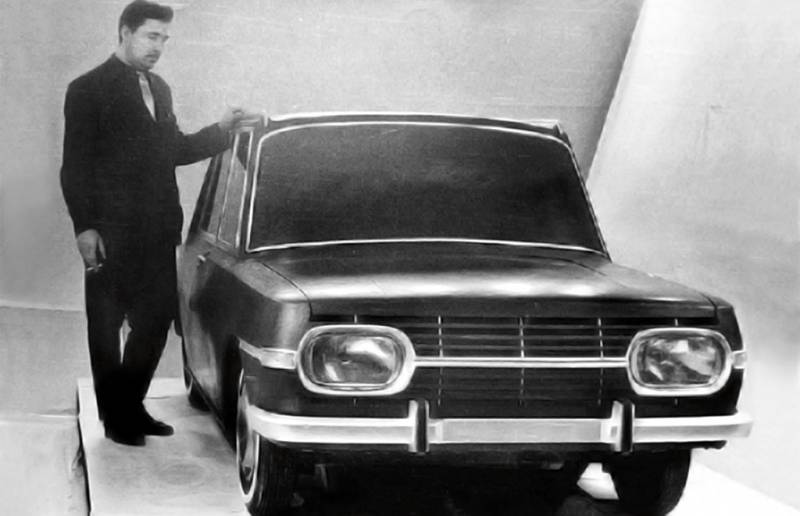 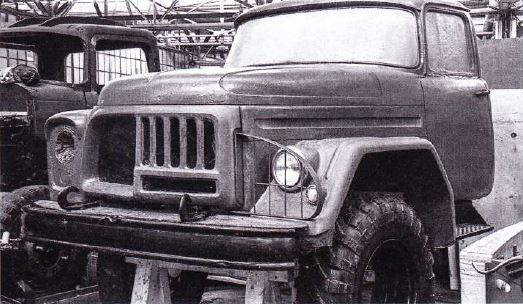 Search layout of the future ZIL-131. Some sources write that the Zilovites did not leave the original cladding of the civil 130 in exchange for the consent of the military with a panoramic windshield 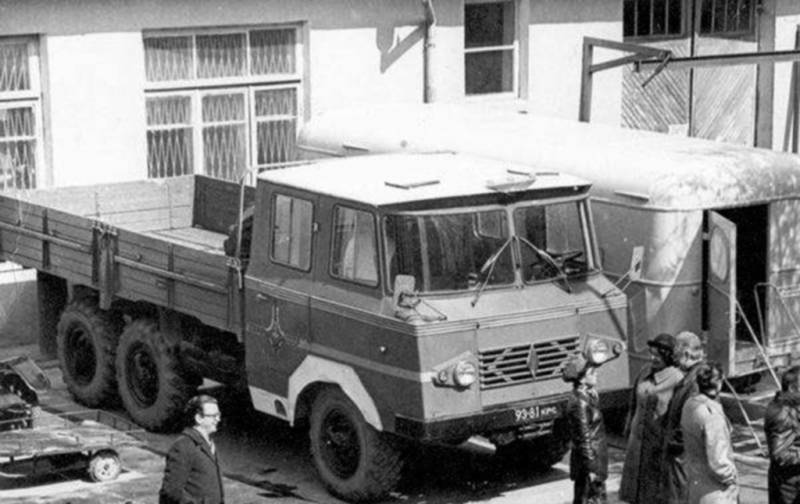 At the end of the first part of the material, I present, probably, the most unusual ZIL-131. This semi-bonnet car was developed and assembled at the Chernigov factory of special vehicles in the early 80's. The main purpose is to accompany cinema expeditions on the road

The described ZIL-131 prototypes were already then difficult to distinguish from future production models. Present were branded, angular wings, a protective grille for head lighting and a wooden lattice body. The transmission was distinguished by relative lightness and simplicity, had an average passage bridge, which favorably distinguished it from a similar ZIL-157 design, in which there were already five cardans. In addition, the cabin of the 131 ZIL was more spacious, and the pressure in the wheels was regulated by a system with internal air supply. Having a high unification with the civil ZIL-130, the army truck was distinguished by a panoramic windshield, which was a kind of nonsense for military equipment. Difficulties arose both with the replacement of broken triplex and with the transportation of curved glass. It is surprising that, subjecting the car to lengthy and picky tests, military experts realized too late the impracticability of curved panoramic glass from ZIL-130. On 19 of January 1959, Colonel Engineer G. A. Getmanov, participating in prototype tests, wrote to the ZIL Chief Engineer that “the use of panoramic windows on the cab, without giving any advantages, seriously complicates driving at night due to the appearance of continuous glare on glass from headlights of oncoming cars. " They did not refuse panoramic glass, but only divided it into two parts.

We are in Yandex Zen
Experienced all-terrain vehicle ZIL-135E "Electrohod"
Multi-axle rocket carriers
94 comments
Information
Dear reader, to leave comments on the publication, you must to register.