July 14 2012
27
The plans of the highest military department of Ukraine to close the military-medical clinical center of the Southern region of Odessa (411-th Military Hospital) as part of the State comprehensive program of reform and development of the Armed Forces of Ukraine for the 2012-2017 years. This means that about 140 thousand people, the number of war veterans, military retirees, military personnel, members of their families and employees of the Armed Forces of Ukraine, invalids of the Great Patriotic War will no longer receive specialized medical care. But this unique and famous medical center treats annually about 20 thousands of people in the hospital and performs about 10 000 operations. 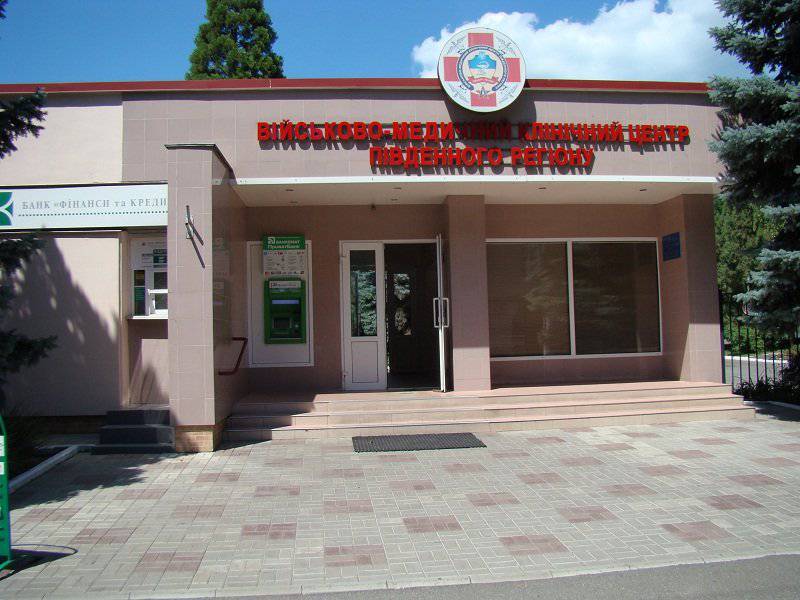 This means that about 140 thousand people, the number of war veterans, military retirees, military personnel, members of their families and employees of the Armed Forces of Ukraine, invalids of the Great Patriotic War will no longer receive specialized medical care.

But this unique and famous medical center treats annually about 20 thousands of people in the hospital and performs about 10 000 operations.

The history of the hospital, which began back in the distant 1797 year, is inextricably linked with the army and the warrior city, the hero city of Odessa. The hospital is an active participant in all military battles of the 18-20 centuries. Special merit of his before the Fatherland during the Great Patriotic War.

The 411 Military Hospital, like the Odessa Military District as a whole, met the treacherous enemy in an organized manner, saved it from death, and returned tens of thousands of soldiers and commanders of the 9 and Primorye Armies, later in the rear and operating fronts.

The courage, professionalism and dedication of the hospital personnel (at the present time - the Military Medical Clinical Center of the Southern Region) are appreciated. The Museum of the Center carefully keeps the Honorary Red Banner and the Order of the Red Star, which the hospital has been awarded.

In the postwar period, the hospital was one of the leading military medical institutions. Our compatriots who were injured and injured in the Afghan war were treated and rehabilitated in the hospital.

The hospital has 43 treatment and diagnostic departments in 650 places, incl. 3 diagnostic center:
• diagnostic of infectious diseases;
• anesthesiology and intensive care,
located in the 12 main medical building, where about 200 doctors, 400 nurses work.
Among the medical personnel are 1 academician, 5 doctors of science, 7 candidates of science, 8 honored doctors of Ukraine, 66 of the highest category doctors.

Now 411 VGOK is a multi-purpose, specialized medical and preventive institution of the Ukrainian Armed Forces. As well as the clinical scientific and educational base of the Military Medical Directorate of the Southern Operational Command, Odessa Medical University named after M.I. Pirogov and medical schools in Odessa.

He stretches along the beautiful street of the city - French Boulevard. The main entrance is from Pirogovskaya Street, named after the founder of the Russian military field surgery. The name of Nikolai Ivanovich Pirogov is also borne by the Odessa Regional Hospital.

In the old plan of the city, the complex is clearly visible: Kulikovo Field, where military classes were held, the district headquarters, the cadet school (located between the hospital and Italian Boulevard), the hospital itself.

The history of the hospital - the history of the Russian army and Odessa. In the city there were military units of Major General Lyapunov and Katenin, the Cossack hundred of the Bug regiment and the Odessa fleet of the coastal command. These units and military settlements required a medical facility. The first mention of the hospital is contained in the report of the Senate 18 of April 1797 of the Novorossiysk military and civil governor Berdyaev. In the documents of the Moscow Archive of Justice, it appears that in the winter month of 1797, 10 of firewood and 23 of reed were released to the military hospital.

In 1808, the hospital is included in the list of hospitals of the Military Ministry, in 1816 in accordance with the Highest Decree, it is attached to the 8 corps, and in 1825-1855 (especially during the Crimean War) sick people and wounded from theaters of war are received here.

At the end of the 70-s, MI visited the hospital. Pirogov. In the book "Military Medical ..." he wrote: "I visited Odessa 3 times during the war. For the first time in August 1877, I laid several hundred wounded in it ... For the second time we visited Odessa in February 1878 ... Despite the fact that Odessa, later than other cities (only in August 1877 of the year), was involved in caring for the wounded and sick, the Odessa Local Red Cross Office managed to provide for our visit all-round 8000 assistance to the sick and wounded. " At the same time, the construction of new hospital rooms for 416 beds was completed.

During the years of civil war and devastation, when in the south of Soviet Russia, epidemics flared up every now and then, the hospital’s military medical team led the heroic struggle against infectious diseases.

The history of the military hospital is closely connected with the names of many prominent figures of domestic medicine. Over the years, Academician M.N. began his medical practice at the hospital. Soloviev, Professor A.I. Geshelin, Ya.K. Gimmelfab, I.R. Drobinsky, L.N. Aryaev, B.L. Ugryumov, I.M. Pound and others.

From 1921 to 1929, the ENT clinic was headed by A.I. Geshelin, a military doctor of the first rank, who during the Great Patriotic War in 1941-42 served in the North Caucasus group of hospitals.

In the 30-s, the eye department of the hospital was the basis for the improvement of ophthalmologists under the guidance of academician V.P. Filatov. Here are the basics of tissue therapy. On the traditions of the national medical school, a large pleiad of his students grew up, who played a significant role in the development of health care.

From the first days of the Great Patriotic War, the Odessa Military Hospital was one of the most qualified hospitals of the Red Army. Its specialists restored health and returned thousands of sick and wounded to service.

In the post-war years, the destroyed premises were restored, new buildings were built, equipped with modern equipment, and therapeutic and diagnostic work was improved.

How much can hospital land cost?

The area occupied by the hospital is about ten hectares or thousands of acres. The commercial value of one hundred square meters of land in the area of ​​French Boulevard is about 60 thousand dollars per hundred square meters, according to the Mega-Macler portal. Consequently, the cost of land occupied by the military hospital may be at least 60 million dollars. It should be noted that a number of capital buildings are in excellent condition on the territory of the military clinical complex.