"Cloak suddenly spoke." Russian language and the bad tradition of the intelligentsia 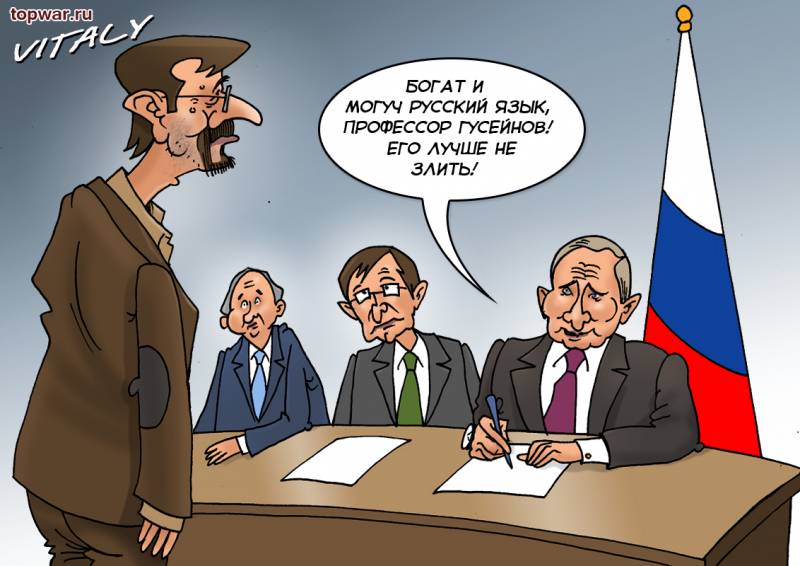 On November 5, a meeting of the Presidential Council on the Russian Language was held in the Catherine’s Hall of the Kremlin. The Council, led by Vladimir Vladimirovich, convened in order to further steadily advance the interests of the Russian language and the people who speak it.

They probably already knew that our language was called cloacal, fascist ... To the screams, screams and hooting of the raging crowds of "intelligentsia" they decided to openly demonstrate their "handshake", for which I say a special human thanks to all of them.

Just in case, a little background to the matter, since the Council meeting itself cannot be considered outside the context in which it took place. And the context is as follows: recently, Gasan Huseynov, a philologist, professor at the Higher School of Economics, publicly called the Russian language "cloacal" and "wretched." More precisely, it’s not generally Russian, but modern Russian, which, according to his advocates, automatically gives him indulgence and translates his statement from the category of insults to the category of criticism. 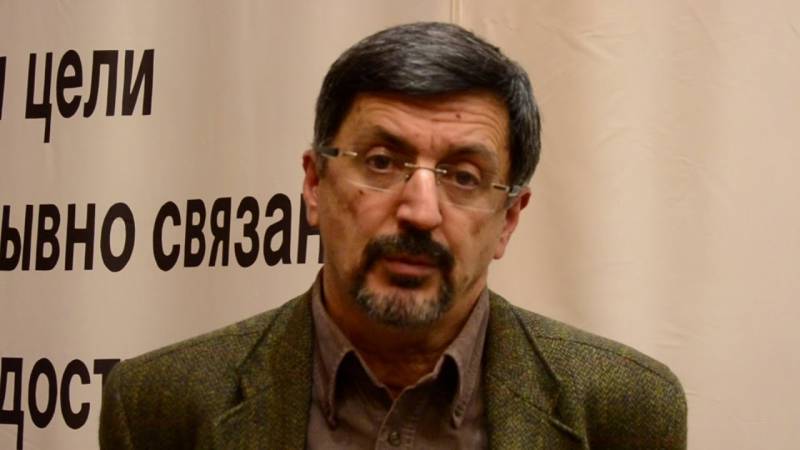 The campaign in his defense is not inferior in its mass character and intensity to the wave of indignation that these words aroused. Many truly “shaking hands” of our fellow citizens, including his HSE colleagues, took part in it. One of them, Sergei Medvedev, for example, managed to disagree with his friend and colleague Hasan, but he made it so that the Russian language turned out to be “fascist”, and not “cloacal,” but all who expressed their indignation at what had happened and generally then stood up for his native language, called "talking cesspool."

Over the past years, it has been institutionalized, formalized into public organizations, groups of authorized citizens (veterans, believers, Cossacks, officers, mothers, etc.) and mechanisms for writing denunciations and letters to the prosecutor's office. There are, of course, salary bot factories and bloggers who are now working on Hasan, but in general this speech spontaneously and sublimates in the collective body, it does not need money and directions, it is ready to kill for words in order to reproduce its biological, organic unity. It is precisely in this, in the fascist compulsion to collective speech, that the profound cloacism of the language lies, which it revealed (perhaps not wanting it to), the post of Hasan - cloaca suddenly spoke. 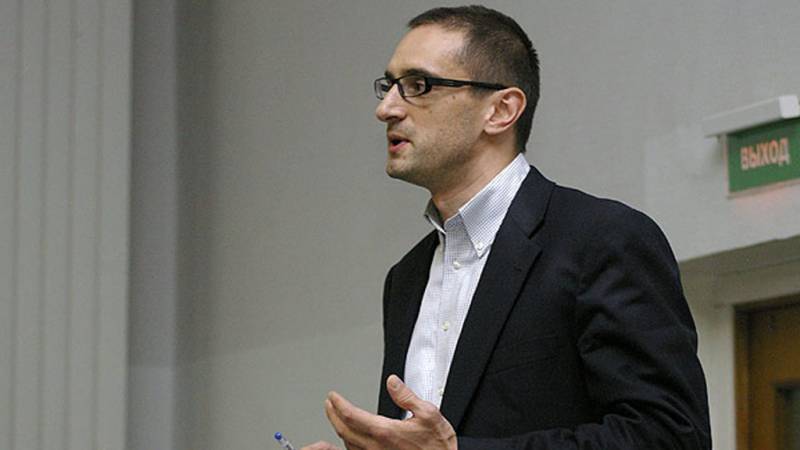 Let's start by noting something for ourselves. Firstly, the philologist and professor somehow bears some responsibility for the current state of the language he is engaged in and speaks. I could somehow accept the idea that a person is boiling and he simply expressed himself in his hearts, if for many years he openly expressed his protest with the state of affairs in the Russian language, held some actions, fought against the fact that , in his opinion, makes the Russian language "wretched and foul." But no, I didn’t hear about such a struggle, everything suited the person, worked (and works!) For the state, which is now to blame for everything, receives a salary, the lion's share of which consists of taxes withheld from representatives of the same “cesspool”.

I understand, of course, that this is very consistent with the traditions of our "intelligentsia" - bowing, thanking the owner, while keeping the fig in your pocket. But somehow not masculine, agree? You’ll be fired, go to private bread, and then voice your private opinion.

Secondly, there are doubts about the professional competence of citizen Huseynov. To confuse language and spoken language is a mistake from which students of the philology faculty try to wean from the first, it seems, course. Especially since, as follows from the explanations, the speech implied was some groups of the population, that is, it was not even a dialect or professional slang.

Nevertheless, the professors managed to call him a fighter for the purity of the Russian language, remembered his "merits" to the great and mighty. Moreover, among the defenders there are many famous and influential people. The liberal media also made their modest contribution. Here's how the situation, for example, Novaya Gazeta described:
On October 29, a well-known philologist, professor Hasan Huseynov wrote on his Facebook page a note that in Russia people do not always know how to use the wealth of the Russian language.

Nice one, right? A famous philologist, professor, said a very good and important thing. And, you see, the “talking cesspool” attacked him! ..

I dwell on this case in such detail, not because I like it or interesting it. Moreover, I completely share the opinion of one of my friends who said something like this: “These philologists do not feel the language at all. So he would call the Russian language, suppose, “shitty”, so it would be for which he would fill his face. And here, "foul" - just flush this professor into the toilet bowl with his opinion, and never remember again. "

But alas, have to remember. If only because it is a profession that educates our youth. And when one calls our language “cloaked”, and the second, from the same educational institution (excuse me, the language doesn’t dare to call it a university), his friend and colleague calls it “fascist”, getting into lengthy arguments about Russian aggression against Ukraine, you start to think about what is taught in this Higher School.

In general, participants in the Presidential Council on the Russian language, including the president himself, should understand one thing: if you don’t react to such attacks, then one of the mentioned Gasanov and Medvedev will sit on this council. But what, prominent figures, are so sincerely arguing about the Russian language, it is clear that they are concerned about the problem, they are worried ...

Give me money, Vladimir Vladimirovich!

Now a little about the Council itself. The first thing that caught my eye was the focus of many of its participants on the solution of a single, often highly departmental problem. “Give me the money, Vladimir Vladimirovich!” This, perhaps, was the leitmotif of at least the entire first third of the meeting. Give money for the program, for the dictionary, for the museum, for the anniversary of Pushkin, for ... 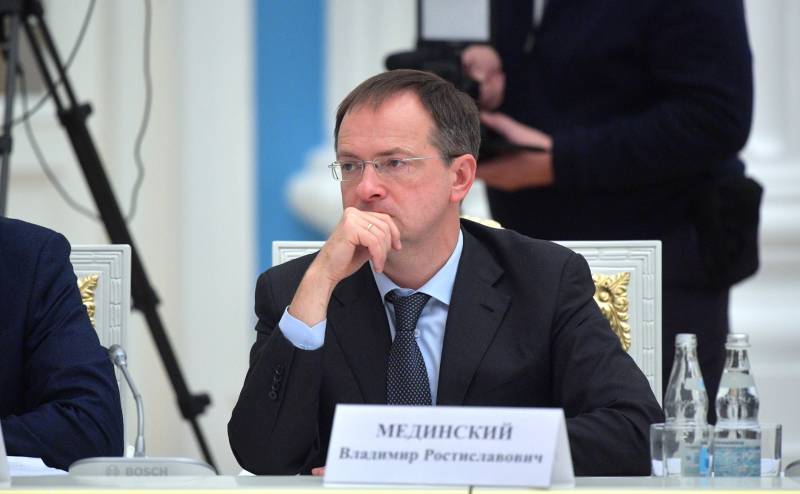 Photo by: kremlin.ru
This somehow cuts my eyes when you get acquainted with the transcript of the meeting. No, I don’t venture to argue - in most cases the tasks and goals are right, it’s a sin not to give money. Here, something else is important, namely, that there is no systematic work in the country, if with each important project it is necessary to go to the president himself. Vladimir Vladimirovich, do you have ministers? They cannot solve these issues without your personal involvement? So lather them, I apologize for my Russian neck! Maybe then such questions will be resolved systematically, without your personal participation, and similar councils from a bunch of walkers who came from the petition to the king will finally turn into success reports?

Another important point voiced at the very beginning by the president himself. Goal setting, so to speak:
Under these conditions, we face two equally important tasks. The first is to provide a decent level of knowledge, general literacy of Russian citizens and thereby global competitiveness, the attractiveness of the Russian language as a modern, living, dynamically developing means of communication. The second is to implement an effective system for supporting the Russian language environment abroad in the information, educational, and humanitarian fields.

Forgive me, Vladimir Vladimirovich, that I again insert my “five kopecks”, but who said that these tasks are “equal”? For example, it doesn’t seem like this to me: even if Africa doesn’t know a single Russian word, we will somehow survive it. This, Vladimir Vladimirovich, is a fact from the category of minor troubles, no more. But the literacy of Russian citizens is such an important task that it’s hard to even think of something that could compare with it.

And although I can be challenged in some part, it’s very important for someone that the Mumba Yumba tribe should have two or three teachers of Russian literature, but still, I think, 99% of Russians will support me: it’s even close not equal tasks.

True, there is an exception: Russian people in Ukraine. Here I agree: it is important, it is extremely important to ensure that they can freely speak their native language. True, I noticed you have one caveat, for which I sincerely thank you:
As for those facilities that are located abroad - unfortunately, today abroad, in Moldova - we will talk with the authorities.

They spoke a lot about the Russian teachers, who are few. They are not cooked enough, even fewer of them are going to work in schools, and many, having worked, run away from there. I will not venture to give any advice on tariff schedules and academic workload - here I’m unlikely to say anything clever. But one good advice I still have ...

You, Vladimir Vladimirovich, say that the teacher’s salary should be at the average level in the region, no less. And many smile joyfully at the same time - it must be what happiness is about to roll over. It has already “rolled over” to many, by the way, only they are not happy about something - a teacher can earn more or less normally only by multiplying the teaching load. And this, imagine, is hard ...

So, Vladimir Vladimirovich, there is an opinion that the teacher's salary should be higher than the regional average or industry average. Yes, imagine - above. Precisely because “Today is the children, tomorrow the people!” Trying to save on teachers, we save on children, on the future of our people, and this is no good.

You ask, where is the money? And this is very simple: if we reduce a million and a half of our officials, we won’t even feel it. But the budgets of all levels will immediately be felt, since our officials earn "with dignity", not a single region has complained about the deficit of officials. And here such a window of opportunity appears that it’s just breathtaking: teachers’s salaries can be increased, and the line from yesterday’s officials to schools will be built, there will be contests for teaching work. By the way, many of them have specialized higher education, many of them have gone from schools to different "prefectures". 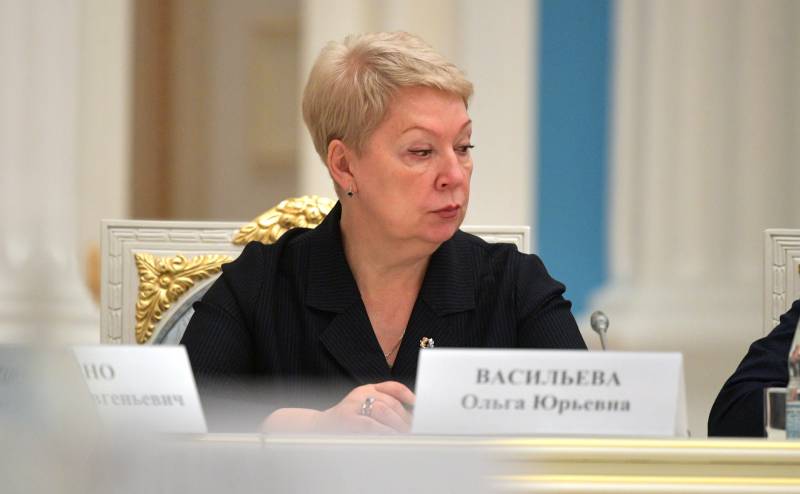 Photo by: kremlin.ru
I understand perfectly well, of course, that a mess is often going on at local levels, that any order can be perverted, distorted, simply not executed. And I'm even glad that you finally expressed concern about this state of affairs:
Once again, I want to draw your attention to the fact that under the Constitution, unfortunately, the municipal level of government is separate from the state. We made international commitments, but somehow it was too painstakingly zealously beginning to fulfill them and such a norm was laid down in the country's Basic Law. In practice, this means that the primary level of health care, including in the countryside, turned out to be virtually cut off from the regional, provincial and federal. The same thing is absolutely happening in education. In any case, that’s how it turned out in practice. And there, as a rule, there is not enough money for either one or the other or the third. Or maybe enough, but spend on other purposes.

But the authority you have, dear Vladimir Vladimirovich, is quite enough not to consider this problem as such. The State Duma, which some detractors sometimes call your "printer", will be happy to accept the necessary amendments to the Constitution. So it's time to roll up your sleeves and start working.