November 8, 2019
41
A special commission investigating the collision of the frigate Helge Ingstad with the Sola tanker publishes a report on the anniversary of the incident. Recall that the frigate of the Royal Norwegian Navy collided with a civilian vessel during the exercises on November 8 2018 year. Having received a hole, the ship began to roll on one of the sides and after a while sank in the area of ​​the Helte Fjord. A few months later, with the help of floating cranes, Helge Ingstad was lifted and towed to the port. 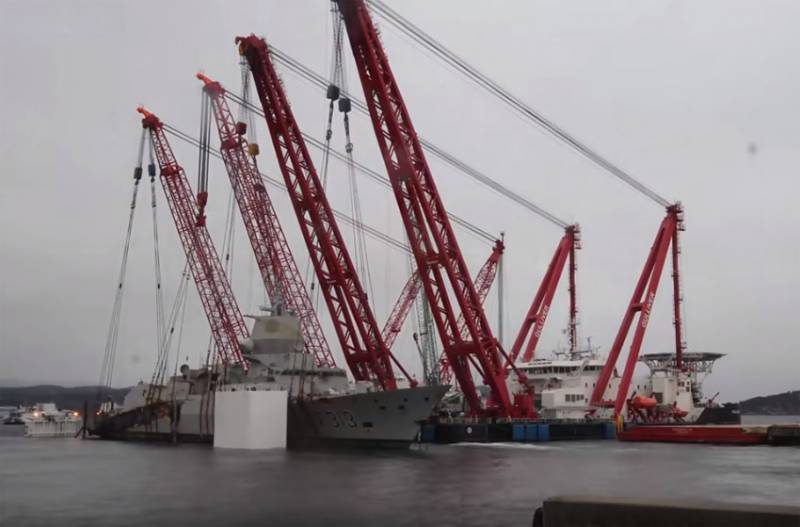 The main question was related to how this collision could have occurred and why the frigate’s crew did not take the necessary measures to avoid it?

The report, which is called "preliminary," reports that several causes of the collision are being considered. First: navigation error, second: inconsistency with the traffic control center, third: lack of proper response to signals from the tanker crew.

The Norwegian Armed Forces Commission, as stated on TV2, has reason to say that the personnel at that time on the bridge "did not possess the skills that could help to avoid a clash."

The following is the time-based data of what happened at Helge Ingstad from 8 on November 2018, as well as data on the movement of the tanker.

The timeline is as follows:

2:38
Helge Ingstad: We move into the area of ​​the transport hub of the coastal administration of Fedje.

3:40
Tanker Sola TS departs from the berth of the Sture terminal.

3:55
The tanker has a speed of more than six knots. It is followed by three other civilian ships, the speed of which is almost twice as high.

3:59
The tanker reports to the traffic control center that it sees an obstacle in its path.

4:00
Sola TS briefly increases speed to more than seven knots, turning to the right, first slowly, then faster. Thus, the two ships that follow from behind are forced to change their course.

4:01
A radio link is established between Helge Ingstad and Sola TS. The tanker asks the frigate crew to move away to avoid a collision. It is reported from the frigate that if they depart, they will come critically close to the shore.

4:03
The main rescue center is notified of the collision.

4:05
Helge Ingstad, having received a hole, begins to fill up with sea water.

04:50
The complete evacuation of the frigate crew has begun. The last crew member will leave the frigate in 06: 30.

About what kind of "guests" were on board the frigate at that moment, is not reported.

It is noted that the ship "with excellent maneuverability" was itself trapped, approaching the coast and actually posing under attack.

The Commission found that the ship, moving in the direction of the Heltefjord, turned off the traffic tracking system, gaining speed near 18 nodes. The Commission believes that this is a series of mistakes by the Helge Ingstad team, because in the end the officers had to act based solely on visual assessments of the situation under time pressure.

From a statement by the representative of the Norwegian Incident Investigation Board: