“They don’t need oil”: Kurdish general told why Americans should stay in Syria

November 8, 2019
62
The Middle East edition of the Rudaw Media Network published a large interview with the commander of the so-called Syrian Democratic Forces (SDS-SDF) Kurdish General Mazlum Abdi (according to some, his real name is Ferhat Abdi Shahin). This is the same person whose Ankara recently asked Washington for, as he considers him a terrorist. 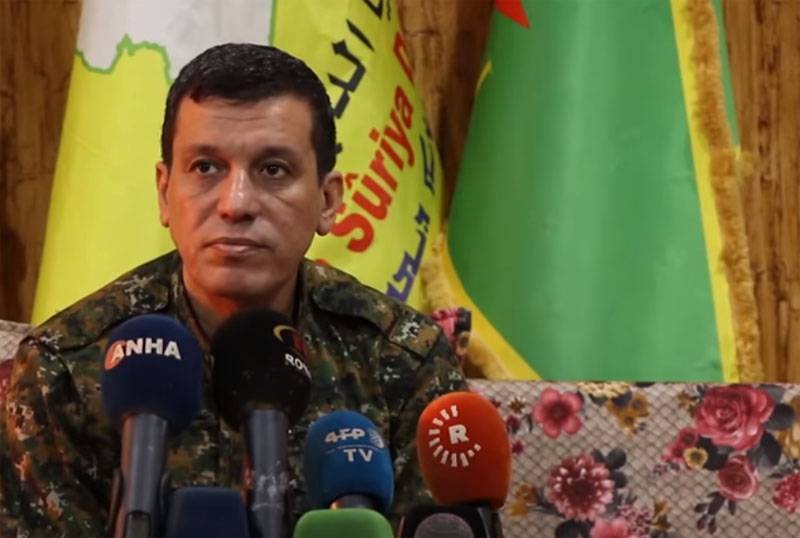 During the interview The question was raised about the proposal of official Damascus for the entry of Kurdish armed groups into the Syrian government army.

According to Mazlum, the dialogue with Damascus continues, and the main point of contact with the forces of Bashar al-Assad is to jointly "oppose the Turkish occupation of northern Syria." At the same time, the Kurdish general said that the SDS, "as an institution," should have independence from Damascus, "as a guarantee that the rights of the Kurdish people of Syria will be clearly spelled out in the new Syrian constitution."

Representatives of Damascus showed us a map on which we marked the territory of Syrian Kurdistan. They told us that such a name is unacceptable in Syria. But for us it is important. The Syrian government should accept this, as there are areas in northern Syria where 90% of the population are ethnic Kurds.
Mazlum Abdi was asked what the Russians think about this position of the SDS? According to the Kurdish self-proclaimed general, Russia does not want to worsen the situation in the north of Syria, and therefore offers to conduct a dialogue.

But so far, no final decision has been made. But our meetings with the Syrian government are very serious.
Mazlum was asked how many American bases are in northern Syria, how many of them have left the Americans, and what are the general goals of the Americans in the ATS now?

The answer was as follows:

Today we had a meeting with the Americans, the conversation lasted about an hour. They told us about the security of their contingent, listed 8 the main provisions of the interaction. I will not list them now. I can only say that we are talking about the areas where they are located, about the number of troops. They have a presence in Kobani, there is an American contingent from Deir ez-Zor to the borders with Iraq. They pursue the same goals as before: counter-terrorist ISIS (* prohibited in the Russian Federation), protection of camps where Igilovites are kept, control of airspace. Their goal is also to protect oil fields.
According to the self-proclaimed general, the Americans “do not need Syrian oil”:

They simply keep the balance so that oil is not taken out, for example, by ISIS *, the Assad regime, or other forces. That is why Americans should stay in Syria.
I wonder who, according to the general, should get Syrian oil, if not the legitimate Syrian government. Are Kurdish armed units really?

Mazlum in an interview denied rumors that the United States closed the airspace over Syria for the Turkish military aviation.

Yes, we sometimes criticize America. We have been criticizing it to one degree or another for more than five years. They played an important military role here, but did not play any political role. And we will criticize them until they play an important political role in the region.
General Mazlum in an interview said that the Kurdish population of Syria is ready to participate in the formation of the Constitutional Council, to negotiate with other parties.
Military Reviewin Yandex News
Military Reviewin Yandex Zen
62 comments
Ad