Why did the White Army lose?

November 8, 2019
383
Smoot. 1919 year. Why did the White Guards lose? Some researchers note that there were too few whites. The Reds simply “filled up with corpses”. Other historians look deeper and note that the white project was a pro-Western, liberal-democratic project, that is, it was unacceptable to the Russians. 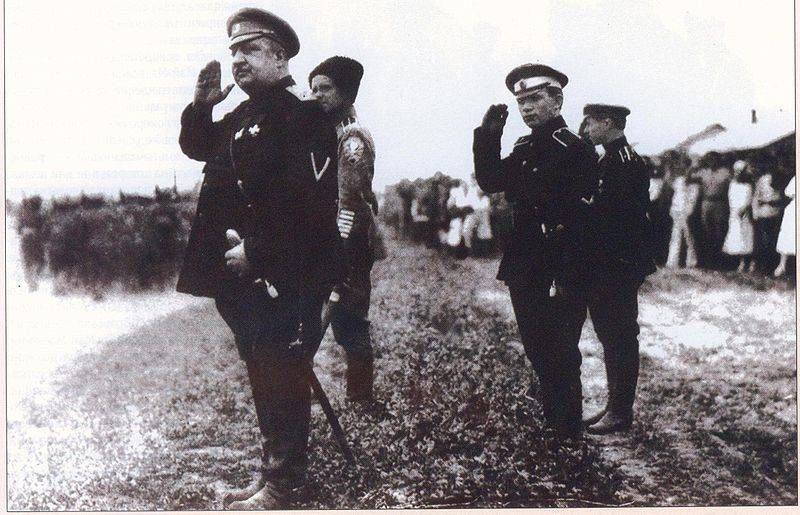 The white project was a continuation of the liberal-democratic project for the development of Russia, which the February revolutionists put forward during the February-March revolution of 1917. Westerners and Masons, the liberal "elite" of Russia, killed the Russian autocracy. They believed that tsarism was preventing Russia from following the western path of development. That Russia is a civilizational, cultural periphery of the Western world, European civilization. That Russia needs to be fully integrated into Europe, discarding mossy survivals, such as autocracy and the unity of the church with the state.

Thus, Westerners, liberals proceeded from the possibility of full economic, cultural and ideological integration of Russia into European civilization. At least a stuffed animal, at least a carcass. Make Russia a “cute” France, Holland or England. In this regard, the current Russian liberals are no better. They are infected with the same disease of Eurocentrism. Hence almost all the current problems of Russia and the Russian people.

It was planned in Russia to create a bourgeois-democratic society, the hallmarks of which were parliamentary democracy or a constitutional monarchy, an independent judiciary, political pluralism, secular society, a market economy, etc. The ideologists of the project were Russian freemasons, connected and hierarchically subordinated to the Western lodges. . That is, they knew very well that in the West, "democracy" is only a sign. In reality, Western democracies stand on a strictly hierarchical system of secret power in order, masonic structures and networks. That the Western economic and political elite is brought up and raised in a closed system of clubs and lodges, starting in youth. That the “independent” judicial system is in fact based on corporate agreements and a system of arbitration of disputes for “chosen”, real masters of life. A market economy has become the basis for monopolistic structures of financial and industrial capital, concentrating in itself the main financial flows and profits. Ideological, political pluralism became the basis for the manipulation of public consciousness. The created social security system was supposed to prevent massive social discontent.

The problem was that the Western European version of the development of Russia suited the countries of Europe, but not the Russians. Moreover, the Western development project, which was introduced by the Romanovs (the peak of their activity is Peter I, who cut through the “window to Europe”), has already failed in Russia. This is proved by the deep contradictions accumulated in the Romanov empire and the civilizational, design and state disaster of 1917 of the year. The Western project was unacceptable to the Russian people.

The paradox of the white (liberal) project in Russia was that the image of an attractive, rich and “sweet” future, acceptable to most educated and prosperous Russian society, did not have a single chance of success among the masses. It is interesting that modern liberal Russia very quickly came to the same. To a dead end and degradation on the rails of pro-Western "modernization". For the pro-Western, liberal part of society, the new bourgeoisie, the "new nobles" of officials and security officials, the image of the West is attractive and sweet. They strive there with all their might, transferring families, offspring and capitals. They see the future only in the West. They want to make Russia at least a stuffed animal, at least a carcass, from Lisbon to Vladivostok (or at least the Urals). At first, people were able to be confused with the help of methods of manipulating public consciousness, information processing and the benefits of a consumer society. However, as the foreign policy worsens (the global systemic crisis that caused the start of a new world war with the main front in the Middle East) and the domestic political situation, with the consistent destruction of the basic social institutions - the state (a gradual renunciation of its obligations to citizens, becoming a “night watchman”) , science, schools, health care, etc., the troubles gradually subside.

That is, the path of integration, the convergence of Russia with the West, its loss of its national identity and leads to disaster. There is a divergence of civilizational and national projects and, ultimately, the collapse and death of the Russian state and society. Westernization inevitably causes collapse and self-destruction. The fact is that the Western project has no chance at all in Russia.

Russian code and the Bolsheviks

The Westernization of the Romanovs blew up and destroyed the Russian Empire. The Russian people cannot be recoded, made of Russian Europeans. The split, the gap between the Westernized Russian elite (including the intelligentsia) and the people who have preserved powerful deep traditional cultural, civilizational strata and caused the disaster of 1917 of the year. And then the Western liberals who seized power (Provisional Government) decided to carry out even deeper integration of Russia and the West. And the full-blown Russian turmoil began.

The white project was a continuation of the pro-Western-liberal project of the February revolutionaries who wanted to regain power and make Russia a part of the "enlightened" West. His victory would finally kill Russia and the Russian people. Russia would become the prey of western and eastern predators. At its core, it was an anti-people project. It is clear that at a deep subconscious level, people knew this. Therefore, the White Guards, although often outwardly more attractive than the Reds, did not receive mass popular support. Hence the smaller number of their armies, compared with the Red Army. Therefore, about a third of the generals and officers of the “old Russia” supported the Reds, a third was for the Whites, the rest remained neutral, immediately fled, became ordinary bandits or servants of the new national regimes.

The people supported the red project. On the one hand, the Bolsheviks created a completely new world, decisively broke with the past. This is consistent with the logic of development, "old Russia" committed suicide. If whites tried to reanimate a deceased society, then the Bolsheviks, on the contrary, began to create a new reality, a new empire. Moreover, the old world died under the weight of its problems, as a result of the mistakes of its development, and not because of the actions of the Bolsheviks. Of course, to the best of their ability, they helped destruction. But the main contribution to the destruction of the Russian Empire was made by the Westernist feudalists, the elite of the “old Russia” - politicians, members of the Duma, generals, aristocrats, grand dukes, members of Masonic lodges, liberal intelligentsia, demanding the annihilation of “rotten tsarism”.

On the other hand, the red project had a deeply national, Russian component (later it was associated with the name of Stalin - Stalinism). The Bolsheviks absorbed fundamental values ​​for Russian civilization and the people, such as justice, the primacy of truth over the law, the spiritual principle over the material, the general over the particular, the catholicity (unity) over the individual. Bolshevism grabbed the old work ethic that was traditional for the Russians (and remained with the Old Believers) - with the fundamental significance of labor in the life and life of the people. The Bolsheviks had an image of a happy future for everyone (except social parasites) - communism. The red world rejected the Western world, based on the spirit of robbery, looting, appropriation and parasitism. Communism was at the forefront of labor and knowledge. Planetariums, houses of culture and creativity, factories and laboratories against taverns and brothels.

Thus, the Bolsheviks had the image of an attractive future for the people. The red project (without internationalism and Trotskyism) basically coincided with the Russian civilizational, national one. Therefore, the Reds received massive popular support. The Bolsheviks also had will, energy and faith. They were ready to die for their ideas. Plus organization and iron discipline. So the Bolsheviks turned out to be the only force that, after the actual death of the Russian Empire in February - March 1917, was able to start building a new life on the ashes and create a new reality, peace, new Russian (Soviet) empire.

How the British created the Armed Forces of the South of Russia
How to restore Soviet power in Ukraine
How Petliurists led Little Russia to a complete catastrophe
How defeated Petliurism
Give the boundaries of 1772 of the year!
Battle for the North Caucasus. How to suppress the Terek Uprising
Battle for the North Caucasus. CH 2. December battle
Battle for the North Caucasus. CH 3. The January accident of the 11 Army
Battle for the North Caucasus. CH 4. How the 11 army died
Battle for the North Caucasus. CH 5. Capture of Kizlyar and the Terrible
Battle for the North Caucasus. CH 6. Furious assault of Vladikavkaz
How Georgia tried to seize Sochi
How the Whites crushed the Georgian invaders
The war of February and October as a confrontation between two civilization projects
How did the "Flight to the Volga"
How Kolchak's army broke through to the Volga
Catastrophe of the Don Cossacks
Verkhniyon uprising
How "Great Finland" planned to seize Petrograd
"All to fight with Kolchak!"
Frunze. Red Napoleon
The missed opportunities of the army of Kolchak
May offensive of the Northern Corps
How white broke through to Petrograd
Battle for the South of Russia
Strategic change on the southern front. Manych operation
Crimea on fire Russian distemper
Crimea in 1918-1919. Intervents, local authorities and whites
How did the uprising of ataman Grigoriev
Nikifor Grigoriev, "ataman of the rebel forces of Kherson region, Zaporizhia and Tavria"
Odessa operation ataman Grigoriev
Uprising in the Ukraine. How failed the “Blitzkrieg” of Grigorievka
Ufa operation. How were defeated the best parts of the army of Kolchak
Moscow campaign army Denikin
"All to fight with Denikin!"
Battle of the Urals
The defeat of the Siberian army. How the Red Army liberated Perm and Yekaterinburg
The defeat of Kolchak in the Chelyabinsk battle
August Counterattack of the Southern Front
The battle for Siberia. Recent operations Kolchak
Pyrrhic victory of the Kolchak armies on Tobol
Operation "White Sword". Beat at the heart of the revolution
"Do not give up Petrograd!"
General battle for Russia
Avalov Army Campaign in Riga
The defeat of the Kolchak armies in the second battle on Tobol
Victories of Denikin’s army in New Russia and Little Russia
White Movement Top
Recent major victories of Denikin