Unannounced details of the C-400 tests at the Kapustin Yar training ground. What did Favorit-RM target missiles imitate?

November 8, 2019
22
The first week of October of the 2019 was marked by a very interesting event for the expert evaluation, which marked the beginning of a new stage in the preparation of the Russian Air Force anti-aircraft missile regiments for counteracting promising hypersonic means of an air-space attack by the enemy, having complex quasi-ballistic flight paths and carrying out more X anti-aircraft anti-aircraft maneuvers . We are talking about the unique trials of the C-20 Triumph long-range anti-aircraft missile system recently carried out at the Kapustin Yar training ground (Astrakhan Region), during which several Favorit-RM hypersonic target missiles were successfully intercepted using 400Н48DM missile interceptors . 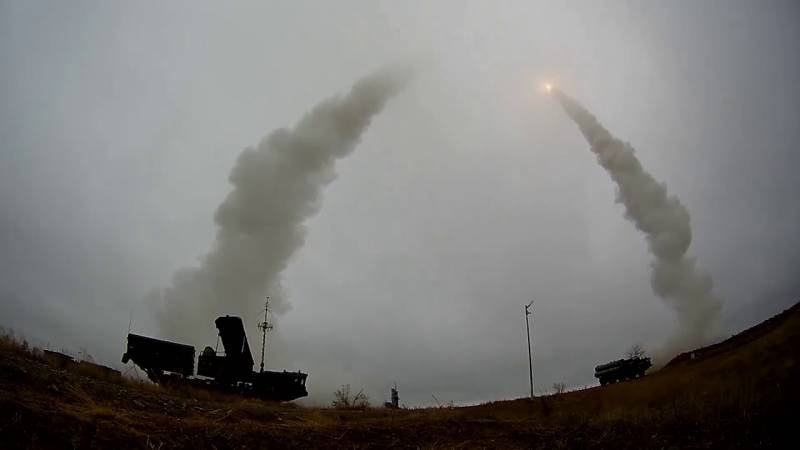 What is the uniqueness of the above four-hundred firing tests compared to earlier full-scale tests involving the interception of the Kaban 96M6 missile family (in the 96M6M modification with a range of up to 107 km and integrated 96М6-03 integrated 75-3 ), RM-20B / MV “Armavir” and 3М0,015М4680 “Singing”? After all, it is well known that, for example, boars of the Kaban family can boast of an ultra-small effective reflective surface (EOC), which is 46 sq. m, flight speed in XNUMX km / h at the final segment of the active section of the trajectory and a quasi-ballistic flight path with an apogee of the order of XNUMX km.

The hypersonic target missiles of the Favorit-RM family will prepare the calculations of the Buk-M3, C-350 Vityaz and C-400 Triumph air defense systems to repulse massive strikes by the Deep Strike tactical ballistic missiles and AGM-183 aeroballistic missiles

The answer to this question is more than obvious: being a modification of the 5В55Р anti-aircraft guided missile, the C-300PS anti-aircraft missile system, the Favorit-RM target missile retained the entire spectrum of flight technical qualities first. In particular, the maximum flight speed of this product at the time of burning out the charge of a solid propellant rocket engine reaches hypersonic performance at 6650 — 7200 km / h (6,25 — 6,75М), while on a descending branch of the trajectory (during diving at angles 70 — 80) Favorita-RM can reach up to 4,5 — 4M in the stratospheric and up to 3,5 — 2,5М in the tropospheric sections of the trajectory. Similar speed parameters turn Favorit-RM into an extremely difficult target both for early modifications of Buk military air defense systems (Buk-M1 and Buk-M1-2), and for a more advanced version of Buk-M2 , the maximum speed of the hit targets which is about 1200 m / s.

Against this background, missile simulators of air targets 3M20M3 of the target complex "Singing" and RM-75В / MV of the target complex "Armavir", designed on the basis of anti-aircraft missiles 3М9 and 5Я23 / 24 of the Kub and C-XNX missiles of the range of X-NX up to 75 m / s, which does not allow them to be included in the list of advanced target missiles capable of simulating promising air attacks of a potential enemy.

As for the maneuvering qualities of Favorit-RM, the high angular speed of rotation and the range of available overloads (25 — 30 units in the troposphere and lower layers of the stratosphere and 8 – 12 units in the upper layers of the stratosphere), typical for the standard 5В55 missiles allow these target missiles to successfully overcome the most powerful anti-missile "umbrellas" formed by most modifications of the Buk, C-300 anti-aircraft missile systems (including PM1 and BM Antey-2500 and B4) and even C-400 Triumph. After all, it is well known that in order to intercept an air object maneuvering with 25 — 30G reloading, the interceptor missile must have a disposable reloading of the order of 55 — 60 units, while missiles of the types 9M38M1, 9MXMNXXNMXNXMNXNMN —317 units Consequently, the successful repulsion of a conventional enemy’s strike by the Favorit-RM highly maneuverable target missiles could take place only if missile simulators of a flight mission were loaded into the inertial navigation system, providing for maneuvering with overloads of no more than 48 — 6 units. (with the realization of 9% new potential), which, obviously, happened during the last tests of the standard modification of the C-82, equipped with the 25Н35DM missiles.

In the case of the implementation of “Favorite-RM” anti-aircraft maneuvers with 25-30G overloads and complex quasi-ballistic flight paths with large diving angles at the terminal section, they can only be intercepted using the promising Buk-M3, S-350 Vityaz and modernized C-400, the ammunition of which is represented by anti-aircraft guided missiles 9М317МА and 9М96DM.

Thanks to equipping these missile systems with active radar homing heads of the Slate family with terminals of a two-way asynchronous data exchange line, for the first time in stories the air defense forces and antiaircraft defense of the airborne forces of Russia, it became possible to intercept the “Favorites-RM” and similar high-speed means of air attack of a potential enemy, attacking the “dead funnel”. The latter is located above the position of the anti-aircraft missile battalion and is a cone-shaped sector of the airspace outside the elevation sector of the radar and guidance radar. Target designation of anti-aircraft missiles 9M317MA and 9M96DM in this case will be able to provide third-party means of radar and optical-electronic reconnaissance.

The unique flight performance of the 9X317MA and 9X96DM missiles (maneuvers with 60 — 70G overloads) due to the presence of a gas-jet system for deflecting the thrust vector in the first and gas-dynamic “belts” of the transverse control engines in the second will be revealed before calculating the “MitX X Buk” ”And the updated“ four hundred ”unprecedented horizons in the field of counteracting the promising American operational-tactical ballistic missiles“ Deep Strike ”and aeroballistic missiles AGM-3A. Simulation of precisely these elements of high-precision weaponsgenerated by the erupted arms race amid the Pentagon’s denunciation of the INF Treaty, is the primary vocation of Favorit-RM hypersonic target missiles.