November 8 2019
113
According to the Russian news agency TASS, the Russian fleet is about to begin deploying submarines with special Poseidon submarines. This news could not ignore the Western media. Two of these submarines will be part of the North and Pacific fleet. Each of them will carry up to eight Poseidons. Accordingly, the Navy will be able to simultaneously deploy up to 32 of these devices, calculated The National Interest magazine. 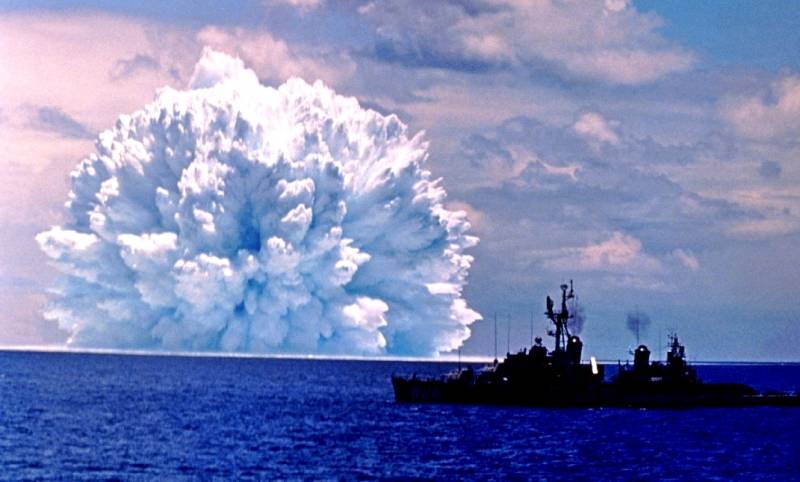 The Poseidon product is a special underwater crewless vehicle with a conventional or thermonuclear warhead with the 2 Mt power, detonated at a depth of thousands of feet. Such an explosion should form a radioactive tsunami capable of destroying cities and infrastructure on the coast. Poseidon will be able to accelerate to 200 km / h, dive to a depth of 1 km and evade interception.

The list of Poseidon’s carriers remains secret. But TASS writes that one of them will be the special submarine Khabarovsk of the 09851 project. Then, several submarines of the Oscar II type (Ave. 949A Antei) will be re-equipped at the Poseidons. Which ships will go for perestroika is unknown.

The lack of information about Poseidon does not interfere with debate and speculation. However, its high fighting qualities are obvious. So, in different sources, the different power of the warhead was mentioned - from 2 to 100 Mt. In any case, the device will be able to destroy the coastal city.

Despite this, Poseidon has no obvious advantages over other components of the nuclear triad. For example, it is inferior to all existing missile systems in terms of speed of striking. The path to the goal and its defeat will take at least a few days.

However, such features provide advantages. The submarine Poseidon complements other delivery vehicles and expands retaliation. A fast underwater vehicle at great depths is almost impossible to intercept. From this perspective, Poseidon is an asymmetric response to US missile defense.

If Poseidon can still be intercepted, its use will still have great consequences. Undermining such an apparatus near the coast of America will provoke a panic among the population and disrupt the work of government agencies and the army. This can be used to cover another offensive operation, the media writes.


Russian media suggest that Poseidon can be used against aircraft carrier strike groups, for which it can be equipped with a conventional warhead. Depending on the complexity and cost of production of underwater vehicles, such a strategy can be very profitable. A Poseidon strike can be cheaper and more effective than anti-ship missile raids.

Finally, Poseidon, as a fundamentally new security threat, will be a convenient argument in arms reduction talks.

However, a new weapon in the form of Poseidon does not have a decisive influence on the development of the Russian nuclear triad. Existing nuclear forces retain their capabilities and provide strategic security. The proposed underwater vehicle only supplements them and gives Russia some strategic benefits.

Ctrl Enter
Noticed a mistake Highlight text and press. Ctrl + Enter
We are
Leonid Khabarov went out on parole, Vladimir Kvachkov while behind barsEvidence of schizophrenia in the case of Colonel Khabarov
113 comments
Information
Dear reader, to leave comments on the publication, you must to register.