November 8, 2019
42
The US Air Force is armed with GBU-57 / B Massive Ordnance Penetrator anti-bomber bombs of several major modifications that differ in combat characteristics. Not so long ago, the latest version of the GBU-57E / B bomb was adopted, and now the air force is getting this weapon new assembly. In addition, plans were identified for the modernization of bombs of old modifications on an actual project. According to the results of their implementation, the entire stock of MOP products will correspond to the latest project and have the maximum achieved characteristics. 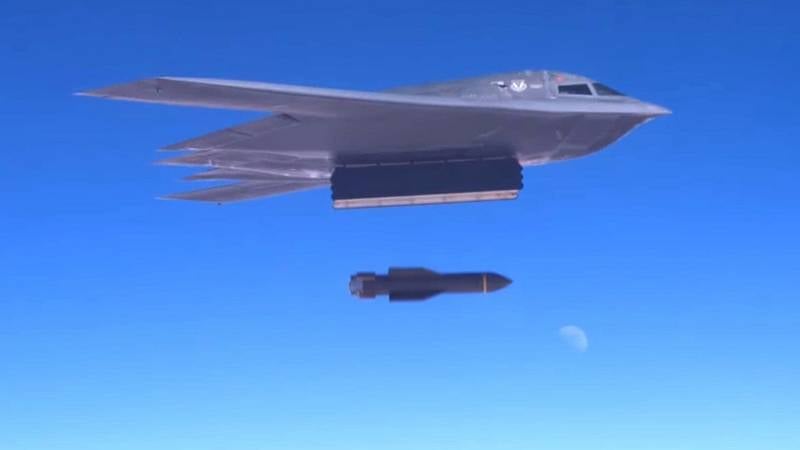 Bombs of the GBU-57 / B series are not very old. Serial production of the first GBU-57A / B modification was launched at the end of the last decade. It was soon established that such a weapon does not fully meet current requirements, as a result of which modernization was carried out. Recently, the fourth modification of the MOP was created with improved characteristics and certain advantages over the previous weapon.

The latest version of the MOP was tested with 2015. At different times and in different sources, this bomb appeared under the designations GBU-57D / B and GBU-57E / B. In recent posts there is an index with the letter "E". Already during the first tests, significant advantages were shown over existing modifications, as a result of which the bomb was recommended for adoption.

In February 2018, Boeing, the MOP product development company, received an order for mass production of the latest weapons. Until July 2020, the contractor must manufacture and hand over the unspecified number of new bombs to the US Air Force. A certain refinement of the carrier aircraft is also necessary, taking into account the new capabilities and characteristics of the weapon.

Production of brand new GBU-57E / B bombs under the 2018 contract continues and is gradually nearing completion. At the same time, the Pentagon is launching a program to modernize its existing weapons under the latest project. On 28 on October 2019, data for a similar order were published.

The contract was awarded to Superior Forge & Steel Corp. (Lima, Ohio) and Ellwood National Forge (Irvine, PA). They will have to make an unnamed number of hulls for penetrating warheads of the BLU-127C / B type. The order must be completed by October 2027. For this work, the two contractors will receive $ 90 million. 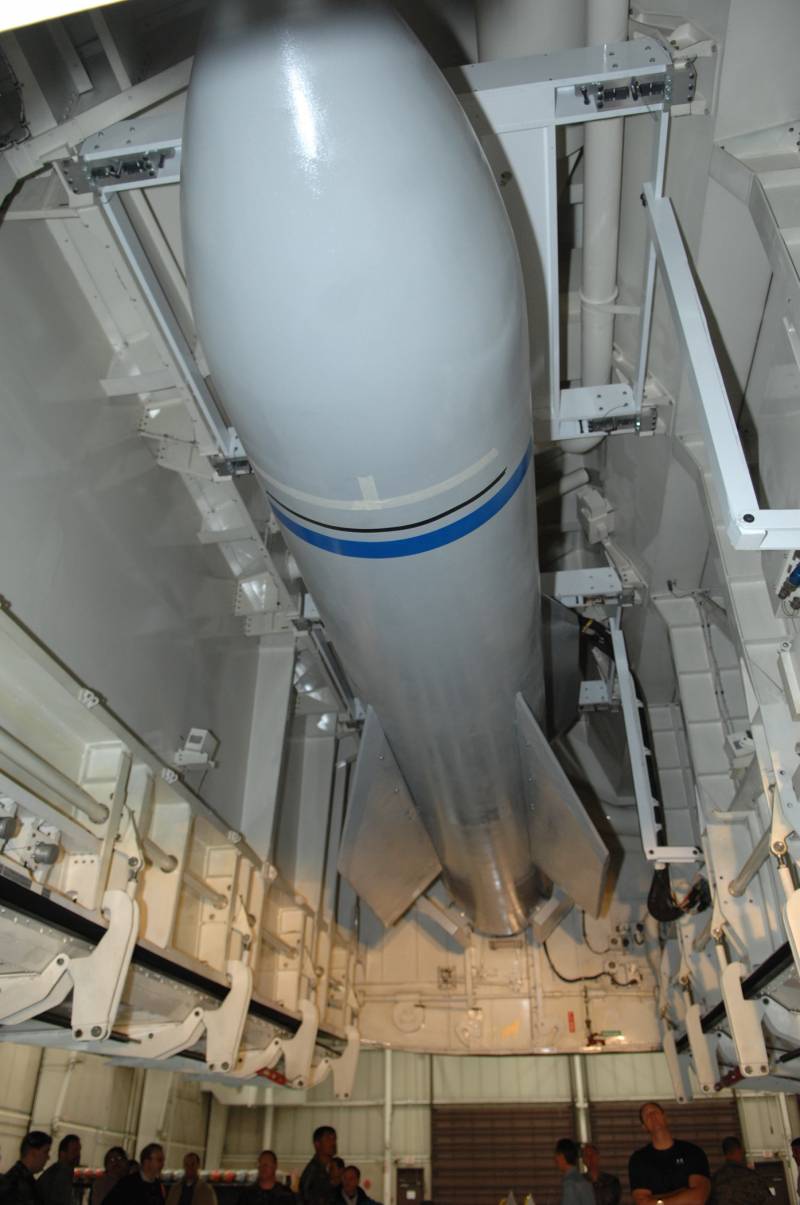 GBU-57 / B in the B-2 cargo bay. Large ammunition occupies the entire amount provided

According to foreign media reports, the corps will be used in the assembly of warheads to upgrade existing bombs. The U.S. Air Force has a certain stock of GBU-57 / B products of the first modifications that do not fully meet the requirements. They are planned to be modernized and brought into line with the latest GBU-57E / B project, which requires modern BLU-127C / B warheads.

Thus, the arsenals of the Air Force are updated, and this process will continue for several more years. In 2020, the Boeing company must complete the production of completely new bombs, and over the next few years, modernization of already manufactured weapons of old versions will be carried out. As a result of this, only the latest modifications of bombs will remain in the arsenals of the air forces, which will in a certain way affect their combat effectiveness.

Products of the GBU-57 / B MOP line are designed to destroy buried structures for various purposes. With their help, the US Air Force can hit command bunkers, underground bases and other enemy targets. A specific tactical role affected the technical appearance of the weapon, and also affected the volume of its production.

MOP bombs have a cylindrical cone-shaped cowling and are equipped with wings and tail rudders. Product length - 6,2 m, body diameter - 1 m. Curb weight - 13,6 t. Of these, 2,5 t is a high-explosive warhead with a reinforced hull that can penetrate soil, concrete, etc.

The aerial bomb is made controllable. On-board automation receives signals from the GPS navigation system and corrects the flight path using the tail rudders. This ensures high accuracy of the hit, increasing the likelihood of a successful hit on the target. 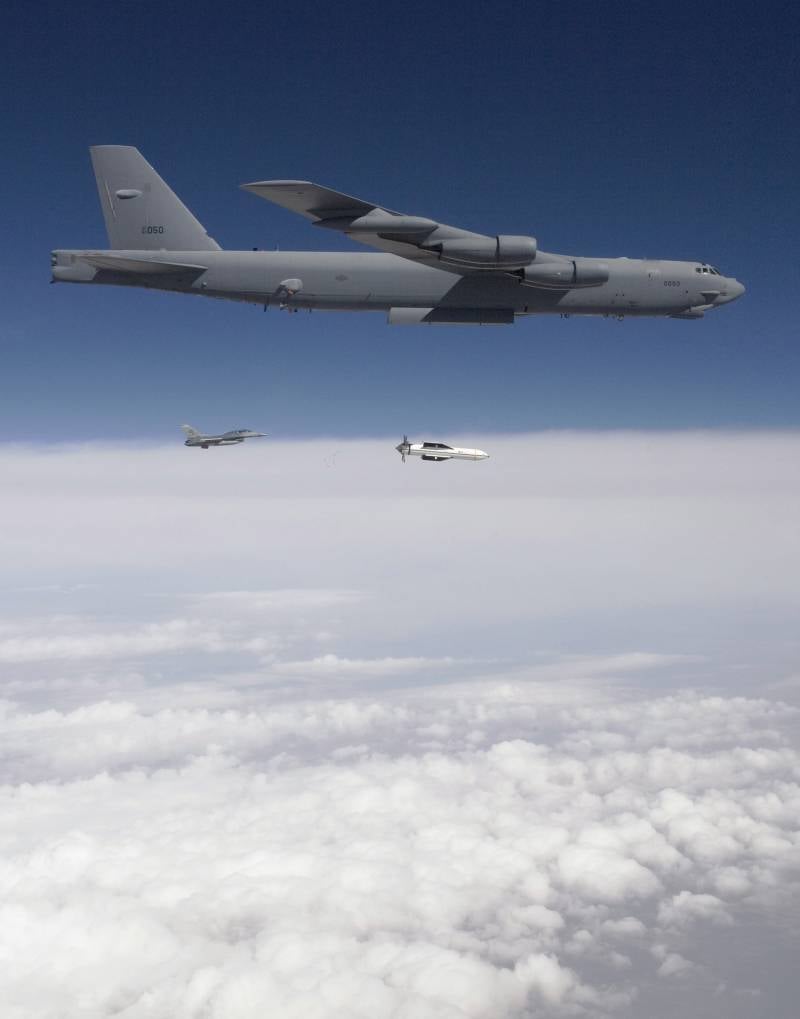 Bomb drop during tests. In the role of an experienced carrier - B-52H

The first modification of the GBU-57 / B showed limited combat characteristics. When reset at the recommended flight modes, it could only go deeper into the ground at 20 m. During subsequent upgrades, it was possible to increase such parameters. Product GBU-57E / B is able to land on the 60 m. Also, the bomb can penetrate up to several meters of concrete. Undermining the charge occurs after passing through an obstacle and stopping the bomb at a depth.

Together with the combat modification of the bomb, a combat training is produced. It is distinguished by the use of an inert warhead, which has a full-time housing and a weight simulator of charge. Such a product is proposed to be used in training events. In addition, it can be used with full weapons. In this case, the inert MOP is dropped first. It must penetrate the soil above the target, shake and soften it before the battle bomb falls. This increases the penetration depth of a full-fledged ammunition and increases the effectiveness of its use.

GBU-57 / B MOP bombs weigh more than 13,6 tons. In addition, they do not have a high flight range after a reset. All this makes special demands on the carrier aircraft. According to some reports, at present, only 20 aircraft from the US Air Force can use such weapons.

In the recent past, only the inconspicuous long-range bomber B-57 Spirit received new equipment for carrying and using bombs GBU-2 / B. The possibility of carrying such weapons is provided by the correct combination of cargo compartment dimensions and carrying capacity. In addition, an inconspicuous aircraft has the ability to reach the drop point of the bomb even while maintaining part of the enemy’s air defense. However, the Air Force has only 20 of such vehicles.

During the tests, the B-52H was also an experienced carrier of anti-bunker bombs, but it is not known whether combat aircraft have such capabilities. In the foreseeable future, MOP bombs will have a new carrier. The new B-21 Raider is being developed to replace several of the current bombers. It will be compatible with a wide range of aviation ammunition, and can include bunker bombs.

Because of this, for some time, the air force will have at least two types of carrier aircraft for the GBU-57 / B. Noticeable quantitative growth is also expected. In the ranks there are only two dozen B-2, and the B-21 is planned to be built in a much larger series.

News On the creation of new modifications of the GBU-57 / B anti-bunker bomb, they are usually accompanied by statements on tasks of a military-political nature. Weapons of the MOP family are associated with specific targets and objects of the likely enemy.

Special weapons are intended to destroy strategically important targets in the DPRK and Iran. For example, in recent reports, the Iranian nuclear facility in Fordo appears as a possible target, where the uranium enrichment process has recently been resumed. This enterprise is located in an underground bunker, which can only be hit with the help of specialized weapons.

Whether the GBU-57 / B bombs will be used to hit real targets in Iran or North Korea is unclear. The United States and these countries regularly exchange aggressive statements, but the difficult political situation has not yet reached a direct clash. Accordingly, anti-bunker bombs remain in the arsenals. However, it cannot be ruled out that the further development of the political situation will lead to their combat use for real purposes.

Until this happens, the Pentagon takes all necessary measures to develop existing weapons and improve their combat qualities. Last year, an order was placed for the production of anti-bunker bombs of the latest modification from scratch, and now the program for upgrading available weapons is starting. Thus, if an order is received to destroy the underground facilities of a potential enemy, the US Air Force will be ready for its implementation - and will be able to use the most successful and effective weapons.