November 7 2019
278
Today is November 7, the anniversary of the Great October Socialist Revolution. It is under this name that millions of people from Brest to Kamchatka, from Alma-Ata to Yakutsk, from Baku to Chisinau knew and know this day. The day that once shared history countries on the "before" and "after". 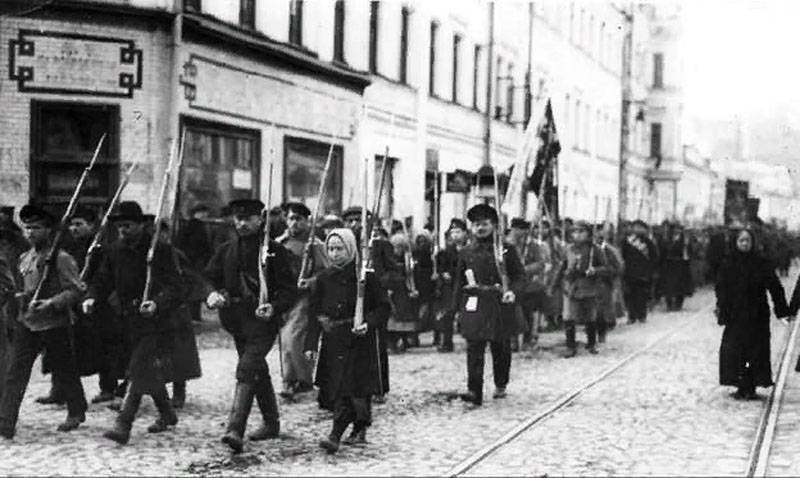 In 1995, the historical date was gradually etched out of people's minds. Initially, by President Boris Yeltsin, November 7 was proclaimed the Day of the Liberation of Moscow from Polish Invaders by the militia of the year 1612. Then they decided to postpone this holiday as well, so that it would not be “associated” with the events of the year 1917. In 1996, the same Boris Yeltsin decided to rename November 7 on the Day of Accord and Reconciliation. Now, as you know, on November 7 in our country officially celebrate the anniversary of the military parade on Red Square 1941 of the year.

Of course, the October Revolution of the 1917 of the year is a most difficult event in terms of historical assessments. However, many are still trying to associate it with the disappearance of a great empire. Around this interpretation revolves and the attitude to the date for many citizens. But at the time of the revolution the Bolsheviks no longer had any empire, chaos reigned in the country, the country continued a senseless war, continued to suffer huge losses.

The very fact that the Bolsheviks committed the revolution can be treated differently. But there is one fact that is undeniable: how many people from (without any pathos) ordinary people, the 1917 year gave a real ticket to life, how many talented people from families not endowed with power and finance, the revolution ultimately made outstanding scientists , designers, doctors, military leaders!

The destroyed country was able not only to restore its territories, but also to turn into a mighty power with developed science, industry, technology, up to nuclear and space. The red banner has become a symbol of readiness for self-sacrifice, labor for the good of the Fatherland, unity of peoples, colossal fortitude.

Yes, the revolutionaries, of course, had mistakes and excesses, but today it is extremely important to take out all the positive things that 102 brought famous events with years ago, it is important to learn the lessons and draw conclusions, without which it is difficult to understand the very scale of what happened over the years post-revolutionary history.

Ctrl Enter
Noticed a mistake Highlight text and press. Ctrl + Enter
We are
Report on the results of the survey-2013 "Evaluation of state political figures"In Russia, recalled the heroes of 1941,
278 comments
Information
Dear reader, to leave comments on the publication, you must to register.