November 6, 2019
56
Not so long ago, the decision of the US president to withdraw US troops from the territory of military bases in northern Syria with the simultaneous abandonment of the Kurdish armed forces was virtually one on one with the Turkish army in the Polish expert community. Then the Turks began Operation Source of Peace. At the same time, Poland openly stated that they were hoping for an "American interest in relations with Warsaw." The general message: the Kurds are not in NATO, we are in NATO, therefore, for the United States we have more weight, which means that the Americans will not do so with Poland as they did with the Kurds. Today, Polish hopes are "strengthened" - primarily reports that "the US has not abandoned the Kurds." As you know, Washington decided to use YPG to patrol the territories of oil facilities in Syria. 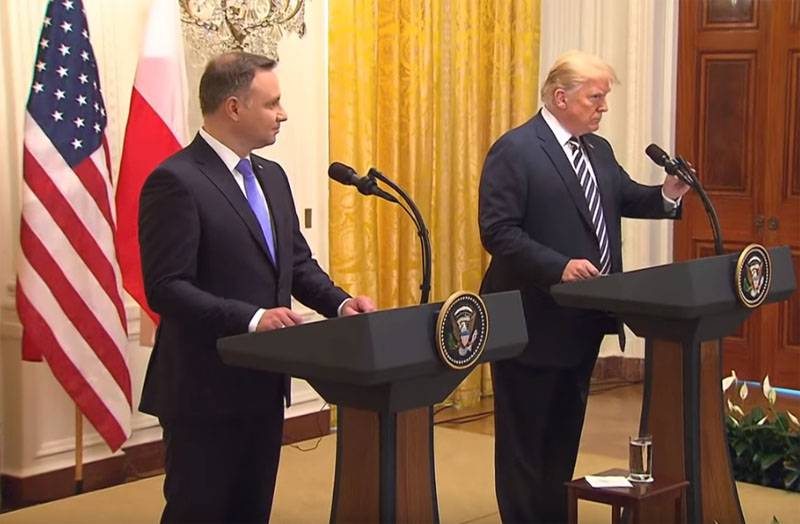 If we start from this situation, the question arises: how Poland is really interesting for the USA as a partner?

On the one hand, the Polish weight seems to be high for Washington. First of all, they are trying to make Poland the territory of the terminals for American LNG. Secondly, an American missile defense facility is being created in Poland. Thirdly, the American "hawks" are impressed by the fact of impassable Russophobia of the current Polish authorities. Fourthly, Poland in the USA is seen as an opportunity to weaken Germany - so that it doesn’t suddenly allow itself to take a “step to the left - a step to the right” of the European policy pursued by the American authorities.

But for all that, Poland is vulnerable. And her vulnerability is associated with the mood of one person whose name is Donald Trump. As a businessman, Trump is not interested in either Polish politics or Polish Russophobia, nor, especially, the Polish army. As a businessman, Trump is interested in one question: is it possible to earn money in Poland? If even more straightforward: can someone offer Trump more than what the United States will allow Poland to earn on itself? If this happens, then Trump, using his well-known thesis that “from them to the USA is seven to eight thousand miles”, can openly sell Poland along with its small-town interests. The terminal and the missile defense facility will be left "for themselves", and a battalion will be enough for security and maintenance.

Why is this scenario real?

He is real for the reason that Poland is in debt. Today, Poland’s foreign debt is 352 billion dollars. At the same time, while in the presidency of Andrzej Duda, the level of public debt in relation to Poland's GDP fell by less than 1%. Today it is about 50% of GDP. It would seem that not so much as in the United States, but Poland has obligations under which it should actively repay debts to foreign creditors (primarily to Germany) at about 0,5% of GDP per year, starting from 2020 of the year. Poland still does not have such an active printing press as the United States ... Every year, Poland spends $ X billion on military industry 10-11. At the same time, Poland is trying to make military purchases from the US, but this is becoming more and more problematic. We would like the F-35 squadron, but they are no longer pulling economically. And Trump doesn't like that. His refusal to visit Poland on the day of the 80 anniversary of the start of World War II (referred to as a hurricane) as a small but disturbing bell.

The US President, as a businessman, understands that Poland is untenable as an independent economic player. Industry, coal mining, and agriculture are severely limited in their effectiveness by European Union quotas and Russian counter-sanctions. Credit flow did not lead to the development of a powerful industrial sector in Poland (and who in the EU needed it at all ...). A good job for a Pole is working in Britain.

In this regard, the Polish leadership, perhaps, should really think, but how big is its role in American geopolitics? Could it be that the Polish “economic miracle”, grown on the basis of German loans, will not bear the burden of obligations to American partners and to the ambitions of their own politicians who see opponents in their neighbors and are confident of their own infallibility?