"Order B". Satisfying the motor hunger of Soviet tanks

The tank building program of the Soviet Union provided for the appearance in the army of several types of armored vehicles at once - from light T-37A to giants T-35. But the T-26 and a series of high-speed BTs were to become truly massive. If in the first case it was enough gasoline 90-horsepower engine from the Leningrad plant them. Voroshilov, but BT required a different technique. As everyone remembers, the 400-strong Liberty aircraft engine became a temporary measure, but its cost and chronic shortage of components seriously impeded the development of tank building. Innokenty Khalepsky, head of the Department of Motorization and Mechanization of the Red Army, in this regard, as early as 1929, warned that "the power of the motors and the speeds of the tractors do not in any way meet the tactical requirements of the motorized units." This problem was superimposed on the requirement of the leadership of the USSR at all costs to increase production tanks with chronic lack of motors. At first, the problem was solved by installing the M-17 aircraft engine on high-speed tanks, but Rybinsk Aircraft Engine Plant No. 26 could, in particular, in 1934 allocate only 80 engines to BT. The remaining 220 were intended for the T-28 medium car, and later for this stories the heavy T-35 should have come up. 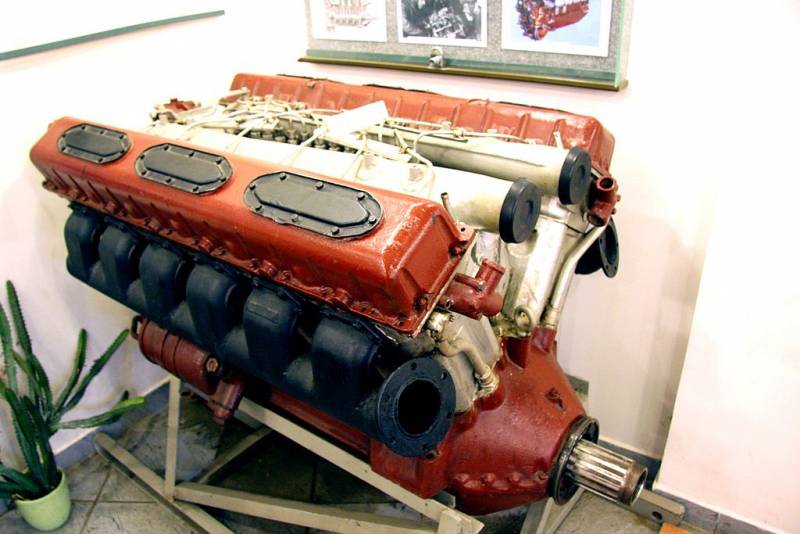 Why did the industry decide to switch to heavy motor fuel? In accordance with the decree of the Central Committee of the All-Union Communist Party of Bolsheviks of November 15 of November 1930 of the year “On the situation in the oil industry”, rational use of oil products and the mass transfer of all types of vehicles to diesel fuel were paramount. In many ways, this became a necessary measure - in the young Soviet republic there was not enough capacity for the deep processing of natural hydrocarbons into high-quality gasoline. In turn, engineers in diesel engines were impressed by high fuel efficiency, fire safety and reduced interference for radio communications due to the lack of spark ignition. According to Evgeny Zubov in the book “Tank Engines (from the History of Tank Building)”, the first attempt to develop a heavy fuel engine for ground vehicles was the 2-stroke AMBS diesel engine. The abbreviation was the abbreviation of names (Alexander Mikulin and Boris Stechkin, it was they who built the engine for the Tsar Tank in 1917). However, such an ambitious task was left without continuation. 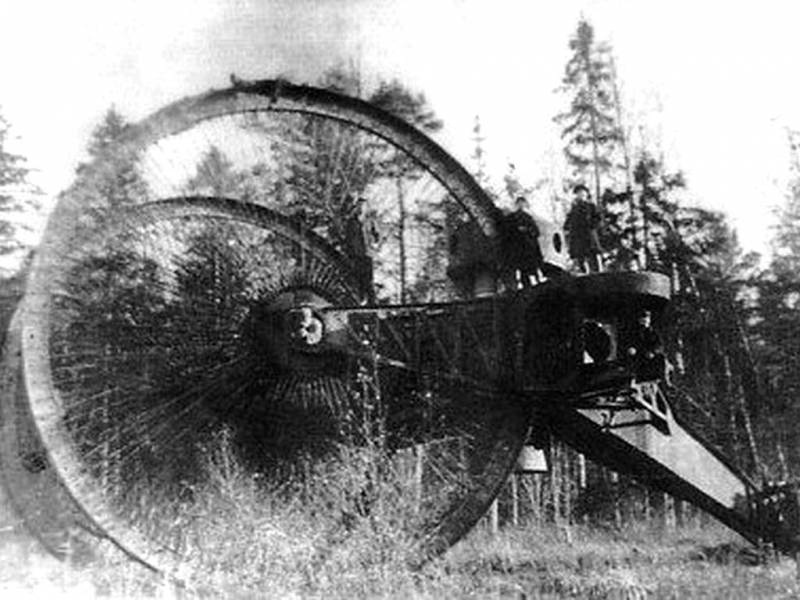 They planned to install a diesel engine on the utopian Tsar Tank.

After not very successful attempts to create the Alpha and OH-1 oil engines in the second half of the 20s, domestic engineers designed a high-speed engine at the Central Institute of Aviation Motors aviation diesel AN-1 ("aviation oil"). It was a 12-cylinder unit, the layout is no different from traditional gasoline counterparts. The diesel engine in the original version developed 750 liters. s., but over time it was possible to disperse it to 1250 liters. with. - It was in this modification that he went into the series. Aircraft oil engine gave a series of engines of various powers, which were installed on aircraft, locomotives and river vessels. 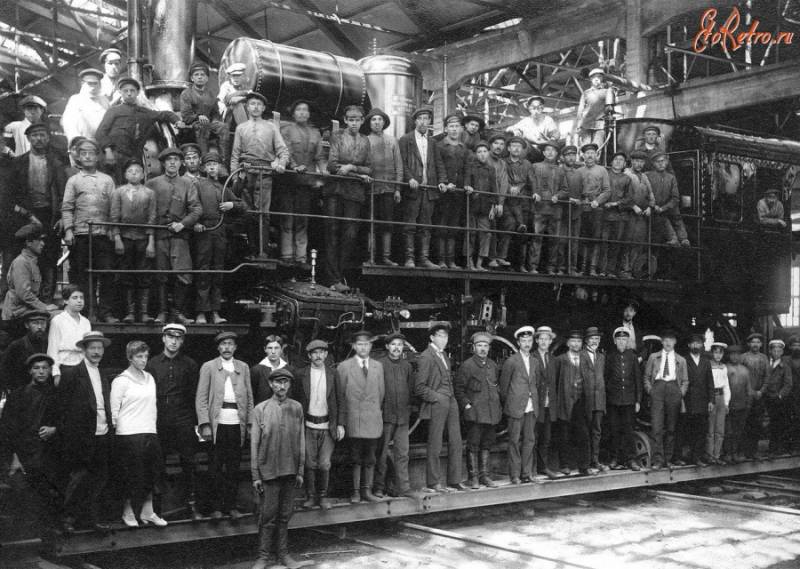 Workers of the Kharkov Locomotive Plant. In the future, the enterprise will become the main developer of B-2 and a forge of personnel-motor builders for the industry of the Soviet Union

An attempt to create a true tank diesel was made at the Voroshilov plant in 1935, when they developed the DT-26 engine for the T-26 light tank. The motor had a mass of 500 kg, a working volume of 7,16 l and developed 91 l. s., however, failed the test, developments on it were postponed. Two years later, at the Kirov experimental engineering plant, they began to build two diesel engines for the T-26 at once - the first was an 4-stroke D-16-4, and the second was an 2-stroke D-16-2. Both units developed 130 l. from. and had eight cylinders (D-16-4 was V-shaped, and D-16-2 was opposed). Actually, then the understanding came that the V-shaped layout of a diesel engine with an 4-cycle cycle would be most optimal for the tank. D-16-4 due to excessive dimensions (did not fit into the MT T-26) did not go into series, which finally left the Soviet light tank without an engine on heavy fuel. A little later, in 1936, at the Kirov plant, a new diesel engine project was launched for medium and heavy tanks DMT-8. The innovation for the 2-stroke engines of that time was the modular design - each segment had two cylinders, a common combustion chamber, intake and exhaust valves. Of the four modules or compartments, an 8-cylinder diesel was assembled, and of five, respectively, an 10-cylinder. The first in the modular design business in 1930 was the designer A. A. Mikulin, when he was developing the M-34 aircraft engine. He then made in-line from the designed V-shaped engine and already worked on the entire experimental part on it. Fast, simple and inexpensive ... And in the 1939, the DMT-8 engine went for testing, but it showed unsatisfactory results - vibration during operation, high consumption of oil and fuel, as well as burnout of the pistons. The DMT-8 did not reach the series - the situation was saved by the development in Kharkov of the 12-cylinder engine, which will subsequently become the legendary B-2.

We need a “powerful diesel engine” - this is exactly the task that Kharkov Locomotive Plant received in the spring of 1931 from the department in charge of the production of locomotives, wagons and diesel engines. The name of the department was very funny - “Parvagdiz”. So, this same “Parvagdiz” posed a difficult task for Kharkovites to develop a diesel tank engine from scratch. In order to meet the tank purpose, the diesel engine must be adapted to frequent changes in traction and speed, and not be afraid of shaking, shock and high levels of dust. As mentioned above, in addition to the Kharkov plant, similar tank engines were also dealt with at the Leningrad State Plant No. 174 named after K. E. Voroshilov, however, the Kharkiv residents had a higher level of competence in this area. 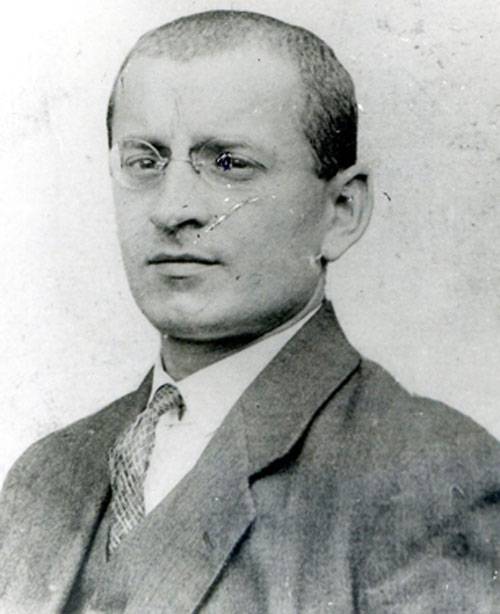 Director of KhPZ Konstantin Fedorovich Chelpan. In 1937, he was accused of "disrupting a government assignment for the production of diesel engines"

Back in the 1912 year, a unit was created at the locomotive plant that was engaged in the program of internal combustion engines, where, after a couple of years, the first oil engines appeared. Moreover, the range was wide: from small 15-strong to ship giants in 1000 l. from. Already in the post-revolutionary time in Kharkov (in the factory department of “400” or, as it was also called, thermal), a four-cylinder diesel engine D-40 was developed, developing 470 l. from. and characterized by very low 215 rpm. It should be noted that, to the credit of the developers, the diesel was equipped with nozzles and a fuel pump of its own design. In addition, the motor was more stationary due to its size and was not suitable in the tank MTO. We needed a revolving and compact engine with great modernization potential so that it could be installed in a light, medium, and heavy tank. And it would be nice to have some bomber in the nacelle. The task was formulated to develop an 12-cylinder V-shaped 4-stroke revolving diesel engine with a power of at least 400 hp They called it BD-2 and it was intended to be a wheeled-tracked light BT - it was required at all costs to replace their gasoline engines M-5 and M-6. It is necessary to stop here separately and explain that such a technique until then in the world did not exist. The requirements were unique. The motor must be powerful, at the same time compact and suitable in terms of characteristics for tough tank operation. And it is very desirable to circumvent in specific parameters the German low-power (only 110 hp) Zaurer diesel engine, which at that time was already limited to the English Vickers. 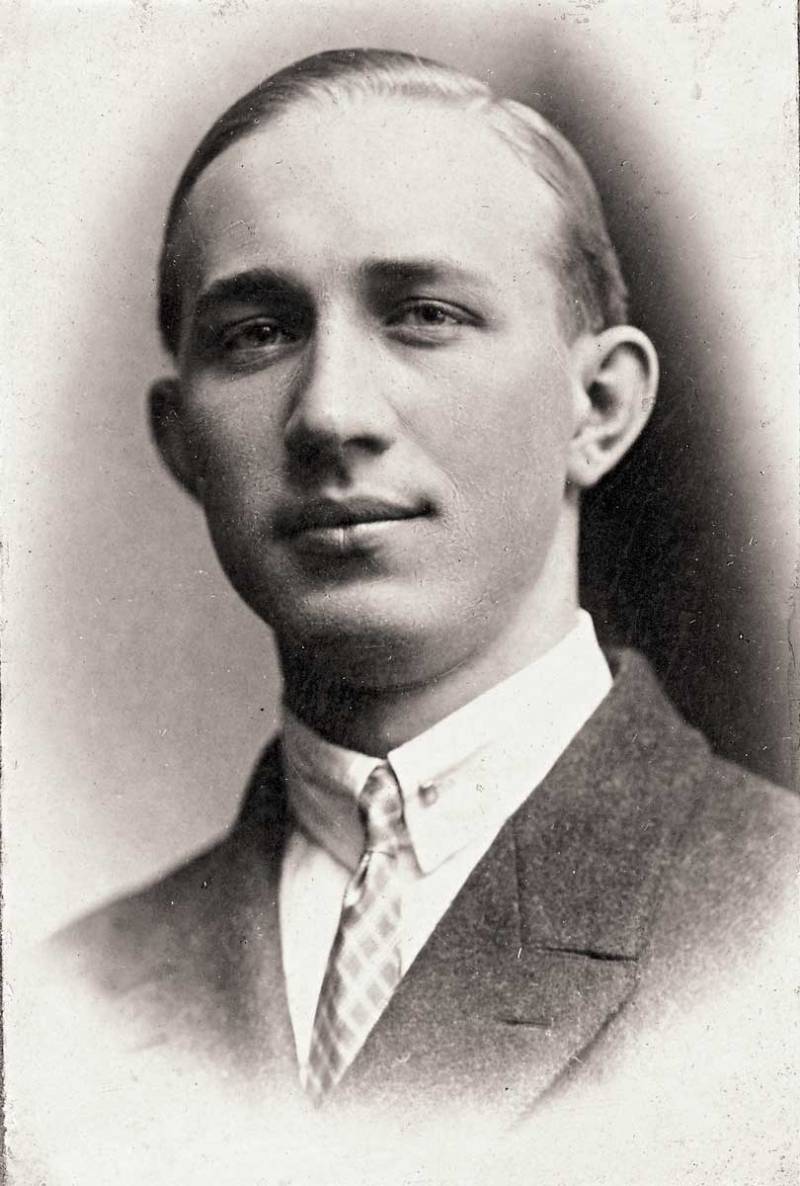 Nikolay Alekseevich Kucherenko - one of the developers of B-2 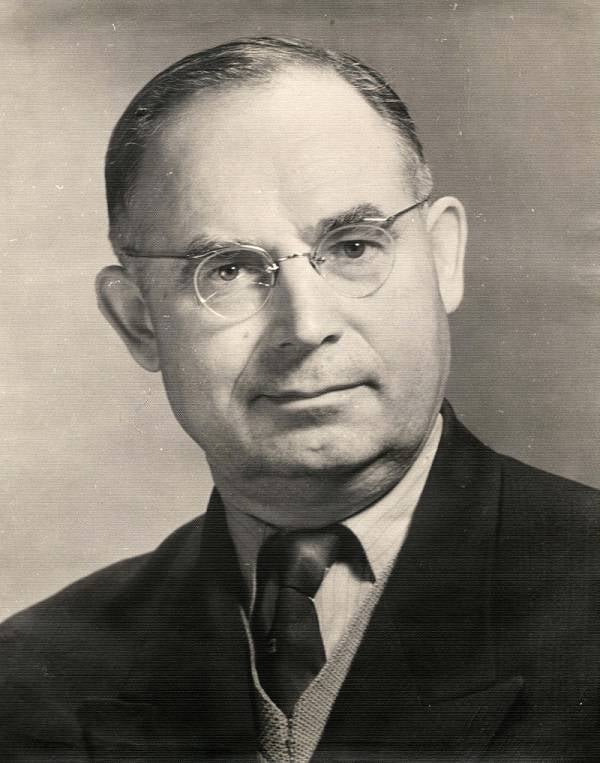 Ivan Yakovlevich Trashutin. At the time of birth, B-2 is a design engineer in the department of heat engines of KhPZ

To test the necessary experimental data in Kharkov, at the beginning of the 1932 of the year, an 2-cylinder DB-14 with a capacity of 70 liters was built. from. As mentioned above, such a modular design approach saved time and resources. On the compartment, engineers worked out the engine’s duty cycle, crank mechanism and gas distribution features. Calculations showed that in the 12-cylinder version, a diesel engine could develop 420 l. pp., which exceeded the basic requirements and was much better than the German "Zaurer" - he would have dispersed in such a configuration to 330 l. from. After testing the compartment in April of 1933, a full-fledged DB-2 diesel engine was assembled and placed on a test bench. With a relatively small mass of 640 kg and a working volume of 38,17 liter, the prototype tank engine at 1700 rpm produced 400 l. s., but turned out to be "raw" for most nodes. In fact, the 2 DB could work without breakdowns for no more than 12 hours. Nevertheless, after surface repairs, the prototype was installed on the BT-5, which, as a result of a heart transplant, was never able to return to the factory floor on its own - the engine always refused. Only until October 1934, about 2 design changes of one or another level of complexity were introduced into the 1150 database. In the future, it was this prototype that received the in-plant name “Order B”, from which the B-2 will appear.

In the book "Confrontation" Daniyal Ibragimov gives the memories of the designer Nikolai Alekseevich Kucherenko, who very accurately described the events of that time:
“Understanding that military affairs cannot stand still, our factory team set itself the task of replacing the gasoline engine with a powerful small-sized high-speed diesel engine. But in the practice of tank building such a diesel engine was not yet. And then the decision came - to create it ... And the engine was created! However, he did not immediately fall into place. Like an obstinate horse, the new engine delivered a lot of trouble. During the tests of the modernized machine, various breakdowns occurred. But the designers did not despair. Diesel gradually began to "get used to" - to work steadily on the test bench and in the prototype. "