Bulgaria between East and West

July 16 2012
44
The Balkan Peninsula is a strategic crossroads between Eastern and Western Christian European civilizations, as well as between Christians in Europe and Muslims in the Middle East along the North-South axis. The peninsula still makes up the northern continental part of the Bosphorus and Dardanelles straits, which connect the Black Sea with the Marmara Sea and the Marmara Sea with the Mediterranean Sea. 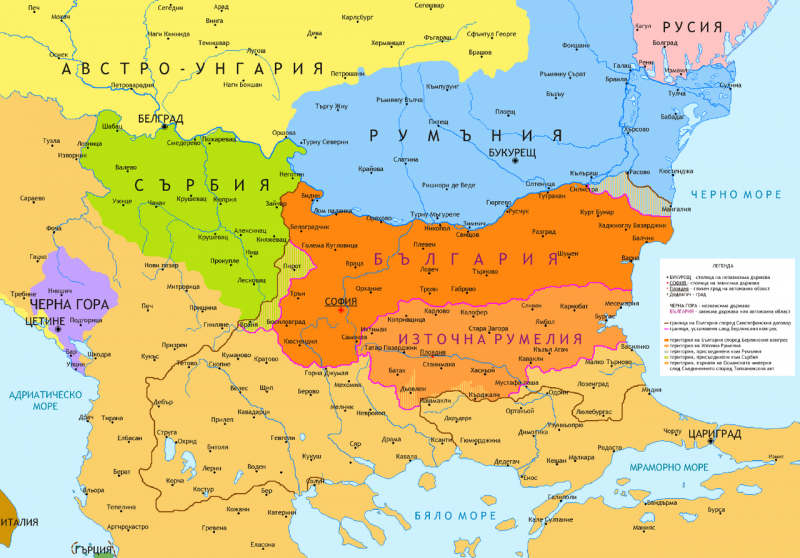 Brown line - San Stefana Bulgaria, established by agreement between the Russian and Ottoman empires 3 March 1878.
Dark Orange Square - Bulgaria according to the terms of the Berlin Treaty.
Light orange square - Eastern Rumelia, reunited with Bulgaria 6 September 1885.
Bulgaria is located in the center of the Balkan Peninsula. The country covers an area of ​​111 thousand square meters. km, with a population of about 7,3 million. A state with such parameters cannot independently regulate resource flows of a strategic level that falls on the Balkans. Therefore, the struggle for strategic control over the Balkan Peninsula and the straits is essentially a struggle for geopolitical influence in Bulgaria. From the 14th century to the present day, the states with which Bulgaria entered into an alliance determined who, when, to whom and under what conditions could pass something through the “intersection”.

Relations along the North-South axis Bulgaria identified for itself once and for all: as early as the 9th century, when Holy Prince Boris I Michael elevated Orthodoxy to the rank of state religion when the Baptism of Bulgaria took place.

But along the East - West axis, problems always existed in Bulgaria, and they all began in the same IX century. The first question on the orientation of East-West was as follows: with whom should Christianity be accepted, with the Orthodox East, or with the Catholic West? Yes exactly! The Great Schism took place in the distant 1054 year, after 200 years after the Baptism of Bulgaria. But even in the 9th century, the country's political leaders understood how the fuss that had already begun between Constantinople and Rome would end. In 864, our ancestors made a choice that determined all of her subsequent cultural and political life - the soul of Bulgaria was, is and will forever remain Orthodox.

In the 12th and 14th centuries, the Ottoman Turks brilliantly took advantage of the differences between the Orthodox states in the Balkans and conquered them one after another. 3 March 1878 of the year, according to the terms of the San Stefano peace treaty concluded at the end of the Russian-Turkish war 1877 — 1878, Bulgaria regained its independence. The whole country exulted and was very grateful for its Russian liberators. The word "bratushki" forever remained in the Bulgarian language as a synonym for "Russians". The canon of the Bulgarian Orthodox Church contains the words "Blessed is the liberator of our emperor Alexander Nikolayevich and all the soldiers who fell on the battlefield for the Faith and the liberation of our Fatherland, may God remember in His Kingdom." This can be heard to this day in every temple of the BOC, during the Great Entry of the Liturgy of the Faithful.

And everything would be fine if the West did not start up! He convened the Berlin Congress 1878 of the year, at which the terms of the San Stefano Peace Treaty fell upon the destructive criticism of all the Western European powers. Austria-Hungary declared violations of the previous Austro-Russian agreements. London openly opposed the strengthening of Russia's positions in the Balkans, against the national liberation of the Slavic peoples of the Balkan Peninsula, and especially against the formation there of a large Slavic state loyal to Russia - Bulgaria. Petersburg was isolated, and it was unable to launch a new war against the coalition. Thus, Russia was forced to accept the Berlin treatise 1878 of the year, which caused irreparable damage to it and all the Slavic peoples of the Balkans.

The Berlin treatise and secret agreements to it defined “areas of interest” in the Balkans. Turkey and Greece were allies of England. Serbia to Russia. Romania - France. And Bulgaria in the "allies" went to Austria-Hungary, and later - Germany. Now the Russians often blame the Bulgarians that “we liberated you, and you were on the German side in both world wars”. So where else would we be? Allies of Russia? Would be very happy! With all my heart, faithfully and truly! Only before becoming an ally of Russia, it was necessary to solve one small problem - to reconsider the conditions of the Berlin Treaty and to achieve the establishment of a different balance of forces in the Balkans. What way could Bulgaria achieve this on its own? After Russia itself threw out the white flag in Berlin and gave the West most of what it had achieved with the blood and courage of its soldiers.

At the end of World War II, Stalin secured a review of the Berlin Treaty and somehow restored historical justice in the Balkans. The rulers of the USSR well understood the development of Bulgarian-Russian relations and did not begin to scatter with the fraternal Slavic Orthodox Bulgarian people. Bulgaria is the only country from the Axis countries that emerged from the war with territorial acquisitions: Bulgaria regained the previously lost Northern Dobrudja. Although White Sea Thrace and access to the Aegean Sea, granted by Hitler, was again lost.

After WWII, the United States unceremoniously threw their fierce friends out of Turkey - the Anglo-Saxons. Officially, the United States announced that it was taking a heavy responsibility to “stand in the way of the expansion of the Communists to the Middle East.” Actually The United States gained strategic control over the Straits, which have been holding almost 70 already. Many of the honorable sirs, peers and lords in foggy Albion burst into a fierce denunciation, having learned about this bitter loss. But there was nothing to do. The Americans solemnly swore that the mountain will stand on the Middle East frontier of the USSR for the democratic values ​​of Europe. This ambition was enough, until the USSR placed missiles in Cuba. Yankesy in the hour removed their from Turkey.

In the period from September 9 1944 to November 10 1989 Bulgaria developed along the socialist path. This period was the best in the history of the country's development after the Liberation. Bulgaria became one of the space and Antarctic states. The first nuclear power plant in the Balkans was built in the country, which the European Union has now declared dangerous, and 4 from 6 power units were shut down at the station. In Bulgaria, the largest petrochemical and metallurgical plants on the Balkan Peninsula - Neftohim Burgas and Kremikovtsi - started operating. Among other things, the country produced tape recorders, televisions, computers and CDs. The standard of living of the population was very high.

Bulgaria was the most loyal ally of the USSR in Eastern Europe. No wonder it was called the "sixteenth republic", and jokes of that time say that "the Bulgarian elephant is the best friend of the Soviet elephant."

And in the 90 of the last century, everything again went awry. 9 November The Berlin Wall fell 1989, and the very next day - the November 10 Central Committee of the Bulgarian Communist Party voted for the resignation of its General Secretary and Chairman of the State Council of the People’s Republic of Bulgaria Todor Zhivkov, during 1989 years he headed socialist Bulgaria. For a decade and a half, Russia disappeared from the world political arena, and in the Balkans, the geopolitical balance provided for by the Berlin treatise 37 of the year was restored. Romania again "for" France, and Bulgaria - for Germany! Turkey and Greece - unchanged from WWII. Knowing the conditions of this treatise, one can well understand why Germany is so loudly indignant when it has to save Greece from the economic crisis. How to "direct the policy of an ally country in the right direction" - so the UK, in their own interests. And how to save the economy of the same allied country is already Germany’s responsibility. Cunning Anglo-Saxons, how can Germany not be indignant?

Serbia had a particularly hard time. The authority and status of Serbia in the Balkans is a mirror of the authority and status of Russia in the world. And the state of affairs is such that, unfortunately, the Orthodox Slavs just have a lot to be desired. And when and under what circumstances the position of Serbia should be corrected, it is better not to think at all - one frustration.

Germany, having fifty years of experience in diplomatic and economic cooperation with Bulgaria, after the collapse of socialism, approached the latter extremely tactfully and diplomatically. Germany invested a lot in the Bulgarian economy. Well took care of cooperation in the field of education and culture. But she did not render any pressure to Bulgaria for carrying out this or that foreign policy line. Germany is well known, and from personal experience, that it is not worthwhile to expect Bulgaria’s special zeal in the confrontation with Russia. Moreover, constantly insist on some small silly clashes. Bulgaria is not Baltic, it will not work here. Even worse - the incessant pressure on the prevailing historical and cultural stereotypes will have the opposite effect.

Such a subtle understanding is incomprehensible to the West. Looking at the passivity of Germany, the United States rushed into the foreign policy and even into the internal affairs of Bulgaria like an elephant in a china shop. And, it should be noted, not on their own, but in partnership, and it may well be - even in direct English setting. Americans - in the political part, the British - in the cultural. The Anglo-Saxons outwitted everyone again. Even if it turned out to be something worthwhile, they would get an equal share, leaving the United States to play the role of a “bad cop,” while remaining clean. And in the case of failure, as actually happened, they have nothing to do with it. Well, launched a large-scale cultural work. Well, they tried to form and civilize the wild Balkan tribes. Yes, it did not. Is it bad to open English schools and develop cooperation between the British and Bulgarian peoples? No, in principle, not bad. There is no need for the Bulgarian peasant to keep the Anglo-Saxons offense. A far-sighted person well understands what this “cooperation” would end if the entire campaign is successful, but there is no formal reason for discontent. In general, the deployment and failure of the UK's cultural expansion in Bulgaria is a very interesting topic. It is undoubtedly worth a separate article, but there are many problems and time is short.

I will not reject my article with stories about the frantic attacks of the United States against Orthodox morality and universal human foundations. I'm about it already wrote и more than once.

The United States is good to write in its currency: "We believe in God!".

Did they not read that "who sows the wind will reap the storm"?