July 14 2012
7
Without waiting for the end of World War II, the new leadership of France announced their requirements for promising military equipment. In March 1945, the de Gaulle government ordered the start of work to create a new tank. Initially, it was supposed to design and put into production medium tanks at the level of the best samples of the Second World War. Subsequently, the appearance of the armored vehicles will change and several versions of the tank will appear immediately. However, all project options were held under the same general designation - AMX 50.

The first was the medium tank version of the M4. This tank was supposed to equip 90-millimeter cannon and provide booking at the level of the American "Sherman" or the Soviet T-34. When developing the M4 tank, information obtained from studying German trophy armored vehicles was used. Therefore, all subsequent vehicles of the AMX 50 family will bear the “imprint” of the German tank construction. In particular, the running gears of all these tanks had support rollers placed according to the modified Knupkamp scheme: they were placed not in four rows, but in two. Two M4 prototypes were built, and later several tanks with more powerful weapons were created on its basis.

In 1949, according to the test results of a tank with an 90-mm gun, it was decided that the French army needed something more powerful. At this time, two projects of new armored vehicles armed with an 120-mm gun were launched. As a result of the first, prototypes of a tank with a swinging turret were created, the second meant the creation of a full-fledged self-propelled artillery installation. It is worth noting that one of the reasons for the creation of the SAC was the risk of a military clash with the Armed Forces of the USSR. After the war, the Soviet Union left a huge number of tanks and self-propelled guns, including heavy ones. The AMX 50 with the 90-mm gun could not fight the EC-3 or the ISU-152. Therefore, it was necessary to make some kind of armored vehicle, capable, at least, to withstand the heavy vehicles of a potential enemy. 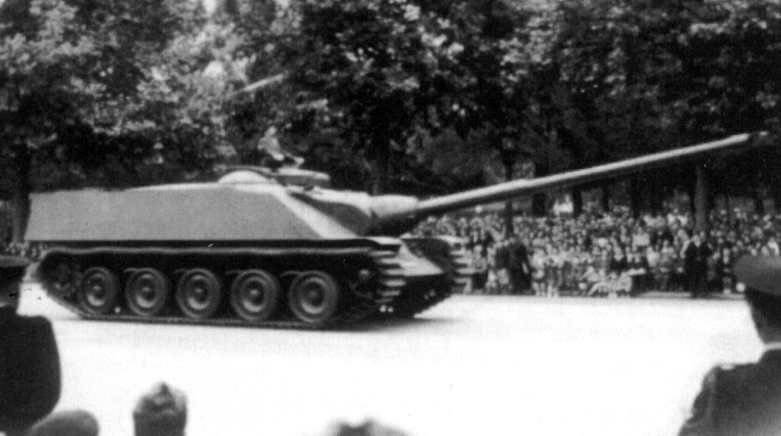 The AMX 50 Foch self-propelled gun, named after the French First World War commander Ferdinand Foch, was used as the basis for the AMX 50 M4 tank chassis. The hull of the original tank was significantly reworked. Due to the peculiarities of the layout of this class of equipment, which is the ACS, instead of the tower was installed bulk armored cabin. Separately, it is worth noting the fact that the cutting "Foch" began in front of the machine and ended only in the stern. For comparison, on Soviet self-propelled guns the cabin always ended in front of the engine compartment, and the hull had a characteristic ledge in this place. At Foch, in turn, a similar ledge, although it was, but was much smaller. The cabin, as well as the rest of the hull, was assembled on bolts and welding from flat slabs. The thickness of the booking details reached the 180 mm (upper front sheet). The bottom sheet of the frontal part was much thinner - 100 millimeters. However, such "differences" in thickness were considered optimal in terms of the ratio of protection and weight. Also of particular interest is the angle of inclination of the upper frontal plate. The 180-mm panel was mounted at an angle of 35 ° to the horizontal. The combination of thickness and angle was not an absolute panacea, but in comparison with the original AMX-50, the new self-propelled gun was much stronger and more secure. It is noteworthy that the AMX 50 Foch self-propelled gun quite reminiscent of the German SAU Jagdpanther. Obviously, this was the very "German experience" obtained in the study of trophies.

The estimated combat weight of Foch self-propelled guns was 50 tons. A fifty-ton armored car was supposed to be driven by a Maybach HL 12 295VC 12 850 15-cylinder petrol engine. As you can see, the French borrowed from the former enemy not only the best practices for booking, but also the power plant. With a power density of the order of 17-50 hp per ton the self-propelled gun could move along the highway at a speed of up to XNUMX km / h. 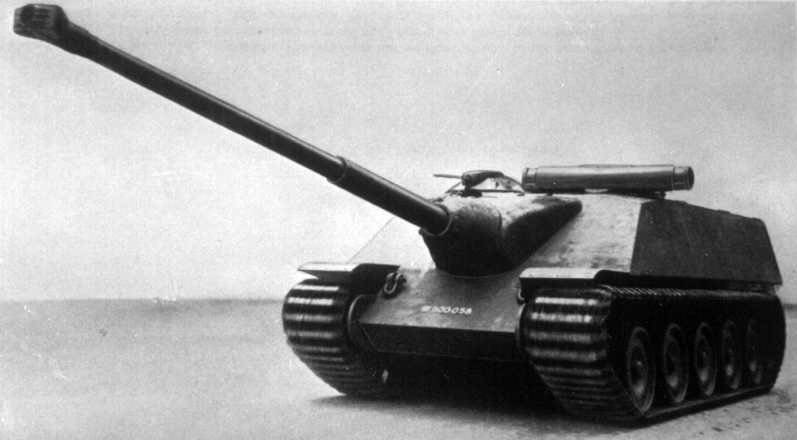 The basis of the weapons "Foch", designed to destroy the enemy's heavy tanks, was 120-mm gun. The long-barreled weapon was equipped with a muzzle brake and advanced recoil devices. To preserve good ergonomics of the fighting compartment, the AMX designers had to carry the gun forward. Because of this, part of the recoil devices was outside the armored hull. For this reason, I had to make an original armor mask of complex shape, consisting of two parts. One of them was fixed on the front sheet of the case, and the second was mounted on the trunk and could move. Due to the fact that the axes on which the gun was rotated were outside the internal volume of the self-propelled gun, it turned out to provide the possibility of pointing the gun with a relatively large breech within acceptable limits. Horizontally, the gun could move in sectors along 9 ° in both directions, and the vertical pickup angle ranged from -6 ° to + 16 °. In the combat compartments, it could fit up to 40 unitary projectiles of any type. The layout of the armored hull made it possible in perspective to add another block of trays for 10-15 shots.

Additional weapons self-propelled consisted of 7,5-millimeter machine guns Reibel. The first of them was located in a special turret above the workplace loader. The turret design allowed shelling in the sector of width 180 ° horizontally and to carry out vertical guidance within 12 degrees up and down from the horizontal. The decision to place the machine gun above the workplace loader raises questions. Of course, the armored vehicle should be armed to defend against enemy personnel, but why wasn’t the machine gun given to, for example, the commander? Naturally, the machine gun located on the roof of the ACS had a number of unprocessable zones. Therefore, besides the loader turret on some drawings of the AMX 50 Foch self-propelled guns, there is a small turret with two machine guns in the rear part. From the same drawings it follows that the stern machine gunner could raise and lower his trunks weapons ranging from -6 ° to + 70 °. Thus, the aft turret served as anti-aircraft weapons. Apparently, the stern shooter was supposed to provide cover for the flanks and rear of the self-propelled gun. Nevertheless, none of the available photographs of the prototypes of Foch have such a turret. It turns out that either she did not have time to finish before the start of the tests, or with time she was abandoned. The total ammunition of all three machine guns was 2750 cartridges. 600 of them was supposed to be a loader machine gun. 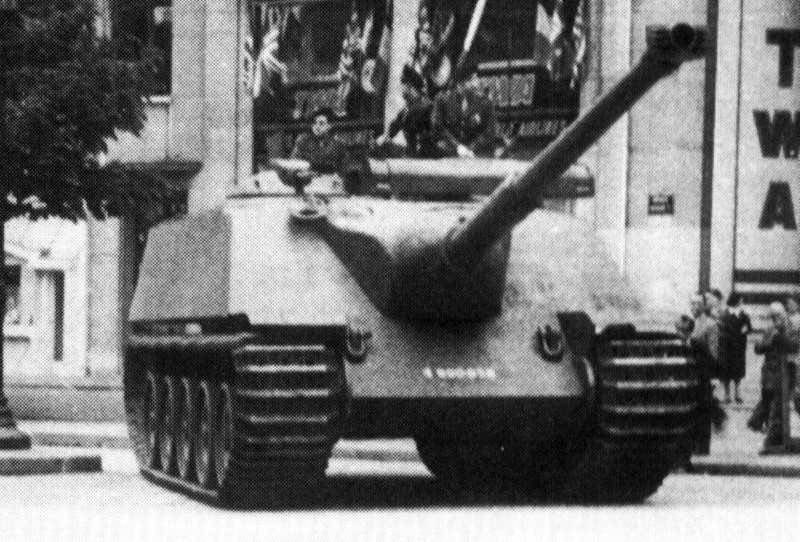 The crew "Foch" had in its composition from four to five people. The driver was located in front of the self-propelled gun, to the right of the gun. Behind him was the workplace loader. To the left of the cannon in the front of the ACS, the gunner’s seat was mounted, which had at its disposal a sight for direct fire, a mechanical guidance system and an electrical fire control system. Behind the gunner’s workplace was placed the commander, whose duties included maintaining communication, searching for targets and general coordination of the crew’s actions. The commander did not rely on the sight - to observe the situation and search for targets, he had a small turret, equipped with a stereo-rangefinder. Due to the high power of the gun, as well as the requirements for equipment survivability, the stereo tube optics were installed in a characteristic cylindrical armored casing. Finally, the fifth crew member in the earlier versions of the project was housed in a machine gun turret in the stern of the ACS. On the prototypes of the Foch, the stern tower, and with it the shooter were absent. The landing of the crew in the car and disembarking from it was made through the hatch in the middle part of the roof of the hull. It was located above the front of the engine compartment. As for the stern shooter, he, located separately from the rest of the crew, had to sit in the turret and leave it either through the hatch in the upper part, or through a special manhole above the engine. When landing / disembarking through this manhole, the shooter first got into the fighting compartment, after which he could get out through the same hatch as the rest of the crew. 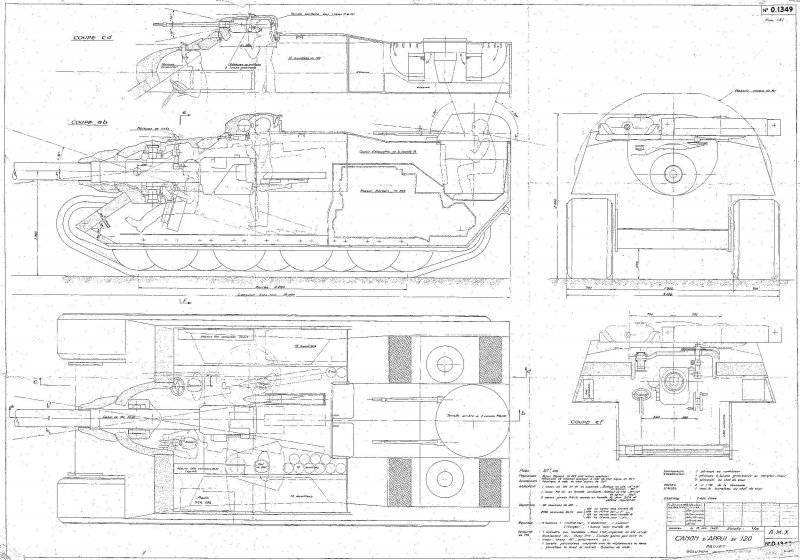 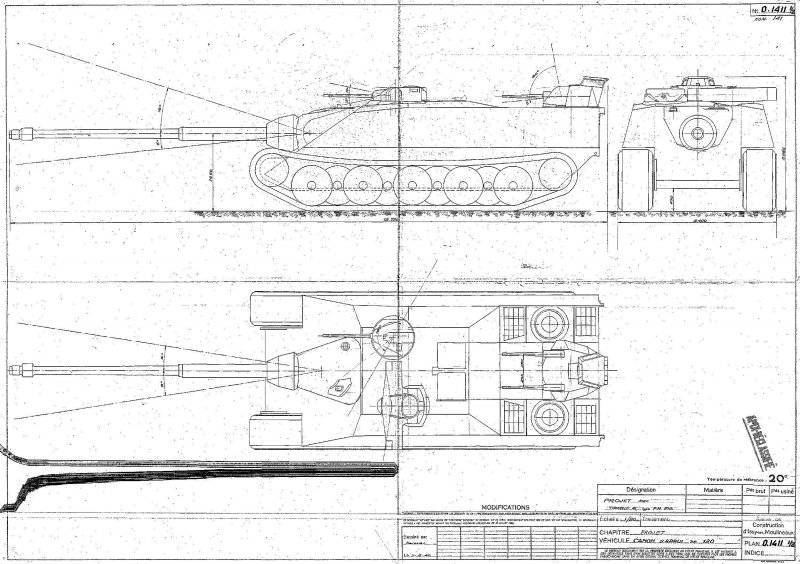 In 1951, two prototypes of the AMX 50 Foch were built. Test shooting confirmed the effectiveness of shooting from the 120-mm gun at the vast majority of existing targets. Previously brought chassis also did not cause complaints. After a short stay at the site, both self-propelled guns were sent for trial use by the troops. However, "Foch" was not adopted. At a time when the French military leadership was deciding on the deployment of mass production, at the same time there were several opinions that seriously influenced the future of all French armored vehicles. First, a number of military commanders began to doubt the advisability of adopting such a self-propelled gun. The judgment has spread that it says that the troops need tanks more than the self-propelled artillery, even with such firepower. Secondly, the active development of the NATO alliance entailed the need for standardization and unification of weapons. Following numerous disputes and meetings, the Foch project was first closed. Later the same thing happened with other armored vehicles developed under the AMX 50 program. The latest of these was the version with a swinging turret and an 120-mm cannon. In total, by the middle of the 50-x, six prototypes of tanks and self-propelled guns were manufactured during the AMX 50 program.

This is what AMX 50 Foch will look like in the game. World of Tanks 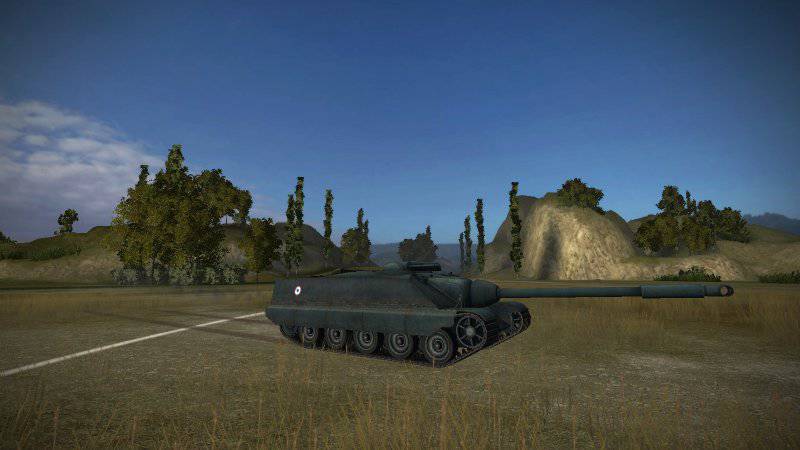