Abkhazia and South Ossetia. On the road to recognition?

Quietly on the border

On October 9, the government of Abkhazia decided to lift restrictions on border crossing with Georgia. Thus, an important signal is sent to the Georgian authorities about Sukhum’s readiness for dialogue with Tbilisi and, most likely, also for the “official” development of economic relations with Georgia. It is unlikely that such a decision has not been agreed with Moscow. 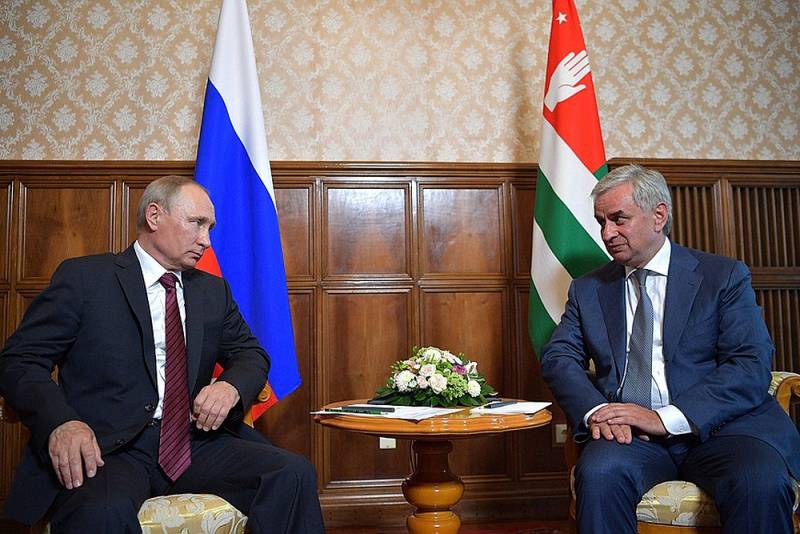 And shortly before that, within the framework of NATO, for the first time, they voiced the idea of ​​Georgia joining this block without Abkhazia and South Ossetia.

It seems that the West and Moscow are moving step by step towards a compromise acceptable to all on the issue of international recognition of the sovereignty of Abkhazia and South Ossetia. 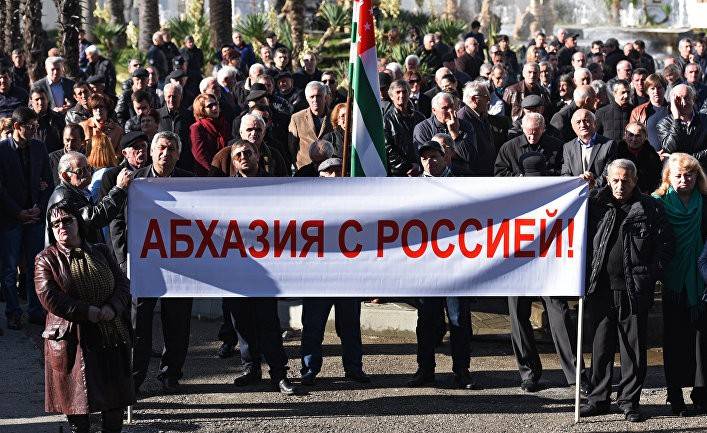 Former NATO Secretary General Anders Fogh Rasmussen, who retains the status of a very influential politician in this bloc, in mid-September first spoke publicly - namely in Tbilisi - about the need to recognize the real independence of both Abkhazia and South Ossetia. Many Western media outlets regarded this as a “strategic sensation.”

In fact, a signal was sent from the West that Georgia’s claims to these already held countries are unlikely to find any real support. Such claims, by a number of signs, are akin to divorced claims of the Kuomintang Taiwan 50's - 70's to mainland China, which were won by the People's Socialist Revolution in 1949.

More specifically, Mr. Rasmussen said - we emphasize at the Euro-Atlantic Partnership conference in the Georgian capital:
“... if Georgia intends to become a future member of NATO, you must ensure the protection of national minorities. And start discussions: will it be acceptable for you to become a member of NATO without Abkhazia and South Ossetia. This decision is up to Georgia, after which NATO must be notified of the decision. ”

At the same time, the ex-secretary general of the block added that
"The separation of Abkhazia from South Ossetia was facilitated by the discriminatory policies of Georgia in these regions, and now we must reckon with the realities."

In Georgia, rushing to NATO, this proposal caused a flurry of negative emotions in its leadership and the pro-Western (prevailing) political circles of the country. But the “official” Western politicians clearly did not disavow Rasmussen's theses.

Which is not surprising if only because in 2014 the number of countries in the bloc whose companies established business contacts with Abkhazia did not exceed 10. And by the end of the fall of this year, this figure exceeded 20, according to the customs committee of Abkhazia. Among these countries, for example, Italy, France, Greece, Turkey, Belgium, Bulgaria, Hungary.

The latest data from the customs committee of Abkhazia (September 2019) are also characteristic: in its foreign trade turnover, the share of Russia reaches 65%. The remaining 35% falls on Turkey (11%), Italy (almost 4%), Moldova with Transnistria (3%), Brazil (almost 3%) and "other states (about 15%)." Moreover, in 2009, the share of foreign countries in this register, excluding the Russian Federation, did not exceed 15%.

Moreover, Georgia is most likely in the register of “other states”. Recall, for example, that the Georgian-Abkhazian commission on joint regulation of the operation of the border Inguri-hydroelectric power station still operates (60% of its electricity goes to Georgia, 40% to Abkhazia); Abkhaz authorities allowed 10 years ago the return of Georgian refugees to the border Gali region of Abkhazia.

According to a Human Rights Watch report from 15.07.2011,
“At the beginning of 1999, the Abkhaz authorities opened a return to the Gali district. Many families really began to return, at first leaving to spend the night on the Georgian side or spending only the warm season in the area to cultivate the land and look after their homes. ”

And as a reciprocal step, the Georgian side has been pursuing a policy of "peaceful reintegration" in relation to Sukhum and Tskhinval since the beginning of the 2010's. Providing primarily for the creation of free trade zones on both sides of the demarcation lines (that is, the borders of Abkhazia and South Ossetia with Georgia); the provision of medical and educational services to residents of these regions, including in their national language; easing restrictions on reciprocal trips. 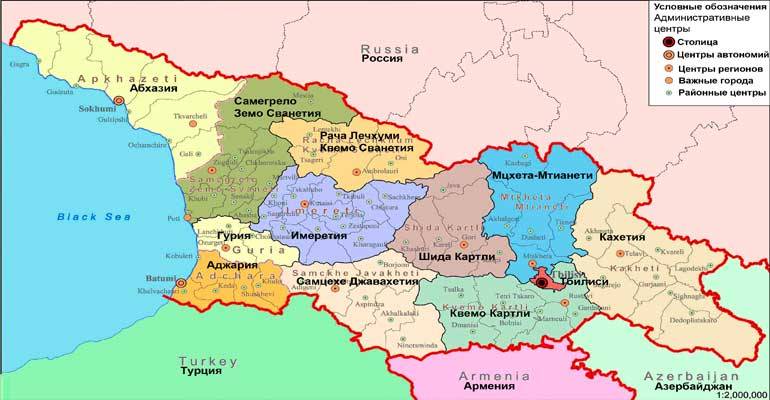 These trade zones are already operating in the local border area, respectively, on both sides along the borders of the Leninogorsk district of South Ossetia and the Gali district with Georgia.

The point, of course, is not the “sympathy” of the West and Georgia for Abkhazia and South Ossetia, who more than have experienced the recent bloody aggression of the Georgian authorities, the consequences of which have not yet been completely eliminated. And the fact that Russia's allied relations with these countries significantly strengthen Russian geopolitical positions in the vast Black Sea-Caucasus region.

Moreover, for example, the Abkhazian coast of the Black Sea is a third of the length of the East Black Sea coast, and the southern border of South Ossetia is only 60 km from Tbilisi and, in addition, not far from Armenia, participating in pro-Russian blocs, that is, in the CSTO and EAEU. In addition, a small (only 1999 km) route passes through South Ossetia from 3, but nevertheless, part of the pipeline for Azerbaijani oil Baku-Tbilisi is the Georgian port of Supsa, from where it is transported to Western countries.

Note, up to 80% of the oil volume for this artery is extracted by Western companies. Obviously, the stable operation of this route is a strategic task of Western business and Western politicians. The leadership of the transnational consortium (AIOC), which manages the pipeline, has repeatedly stated that, contrary to the forecasts of the Georgian authorities, there are no and are not expected disruptions in its work in South Ossetian territory.

It is clear that ignoring all these realities is more expensive for yourself. And naturally, they force the West to at least contact Sukhum and Tskhinval, thereby recognizing the geopolitical role of Russia's allied relations with these countries. Which, in turn, paves the way for official international recognition of Abkhazia and South Ossetia. 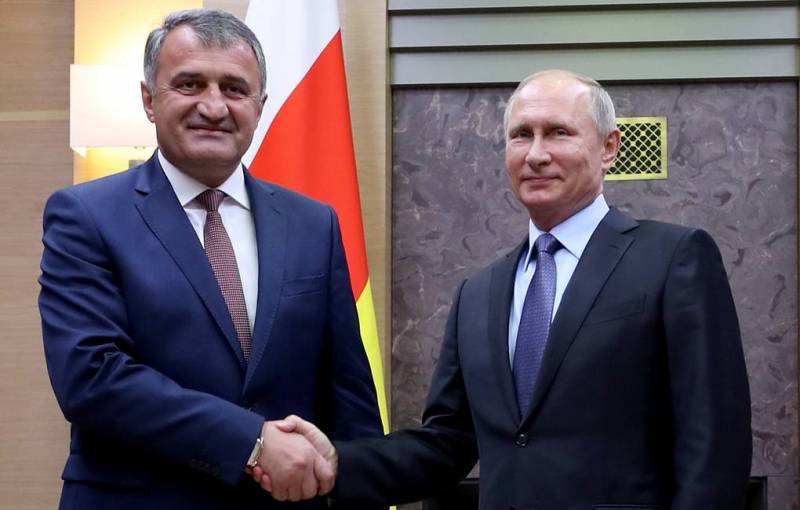 As a reflection of such tendencies, the point of view of the Polish expert Konrad Renkash expressed in the weekly magazine “Khrtal” (Warsaw) from October 3 can be quite regarded.
“After repelling the aggressions of Georgia, supported by the West, Abkhazia and South Ossetia with the help of Russia strengthened their independence. With the help of Russia, in the 1994 year, a final peace was achieved, and Abkhazia was able to grow stronger. Over the past decade, around 350 new hotel facilities, including those meeting the highest international standards, have appeared in the same Abkhazia. This is a promising, extremely interesting and calm country. ”

Regarding Abkhaz-Georgian relations, it is noted that
“Former Georgian refugees who now enjoy all cultural or educational rights were admitted to Abkhazia. There are other facts of some “warming” between Tbilisi and Sukhum. ”

At the same time, the Polish expert emphasizes that "Abkhazia will no longer be a" chip "in the" games "with Georgia." And unlike Russia, in Poland and, in general, in the West
“Somehow they forgot, to their own detriment, to support - unlike Moscow - the long-standing national liberation aspirations of Abkhazia, therefore,“ compensation ”is due to us from it. In the future, of course, it should take the form of recognition of the republic. ”

By all indications, the situation, albeit slowly, with zigzags, is moving towards official international recognition of the legitimacy of the sovereignty of South Ossetia and especially Abkhazia.

Ctrl Enter
Noticed a mistake Highlight text and press. Ctrl + Enter
We are
South Ossetia wants to Russia. How will the republic solve the problem of reunification?Russia and Georgia: traps from "well-wishers"
60 comments
Information
Dear reader, to leave comments on the publication, you must to register.