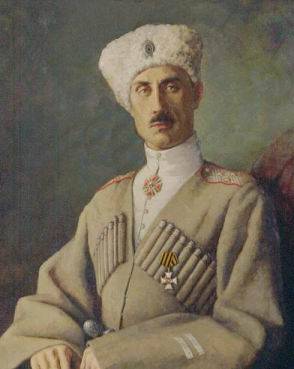 Volunteer of the Russo-Japanese War

The future commander of the Russian army came from the nobility of the St. Petersburg province. He graduated from the Rostov Real School and the Mining Institute of Empress Catherine II (St. Petersburg, 1901).

In September 1901, he entered the rank of private volunteer 1 rank in the Life Guards Horse Regiment. In March of the following year, P.N. Wrangel, after graduating from the regimental training command, became a non-commissioned officer, and in July - a standard-cadet. He passed the exam for the officer rank at the Nikolaev Cavalry School (according to the 1 rank) and was promoted to cornet (pr. 12. 10. 1902 g .; Art. 12. 10. 1902 g.) Enlisted in the guards cavalry.

With the outbreak of the Russo-Japanese War, the young man did not consider it possible to stay away from military events and was volunteered (the Highest Order of February 6 1904) was identified in the 2 Verkhneudinsky Regiment of the Transbaikal Cossack Army (based on a report to the Highest Name). On February 27 of the same year, he was transferred to the 2 Argun Cossack Regiment. During this period, the Baron earned the first military award - the Order of St. Anne of the 4 degree "For Courage" (4 of July 1904). The centurion (pr. 12. 1904; Art. 01. 12. 1904; for the difference in cases against the Japanese) P.N. Wrangel was transferred to the 1905 hundredth Separate reconnaissance division in May 2. For differences in cases against the Japanese, the baron was promoted to sub-jail (Art. 22. 06. 1905). With 06. 01. On 1906 he was transferred (with renaming to staff captains from Art. 11. 06. 1905 g.) To the 55 Dragoon Finland Regiment. In the same period (1906), P.N. Wrangel became a holder of 2 combat awards: orders of St. Stanislav of the 3 degree with swords and a bow and St. Anna of the 3 degree.

Then Pyotr Nikolayevich commits an extraordinary act - despite the fact that service in the Guards regiment was already an excellent prerequisite for career growth, he entered the Nikolaev Academy of the General Staff (seconded on 20 on August 1907). And in 1910, he completed both classes (in the 1 category) and an additional course ("successfully") in the Academy. The Baron was seconded from the Academy to the headquarters of the St. Petersburg Military District, but "at his own request" remained to serve in the ranks of the "native" Life Guards of the Horse Regiment. Having completed the course of the Officer Cavalry School (1911 g.), Arrives in the regiment.

It is not surprising that the frontal attack of dismounted cavalrymen passed tightly. As the source noted: “by 15 hour. the entire horse detachment got involved in a marching foot battle with the German infantry at the front of the villages of Raudonachen, Meshken, Tuteln, Kaushen, Pilkalen and somewhat to the south. Parts suffered heavy losses, with 1 and 2 guards. div slowly moving forward, the consolidated remained in place. "

The support of the Guards Equestrian Artillery and the equestrian attack of the Horse Guards 3 Squadron, Captain P.N. Wrangel, made a difference. The squadron galloped at the enemy’s guns - and captured 2 field guns, 4 charging drawers and a tower. Under P.N. Wrangel, a horse died from a gunshot. 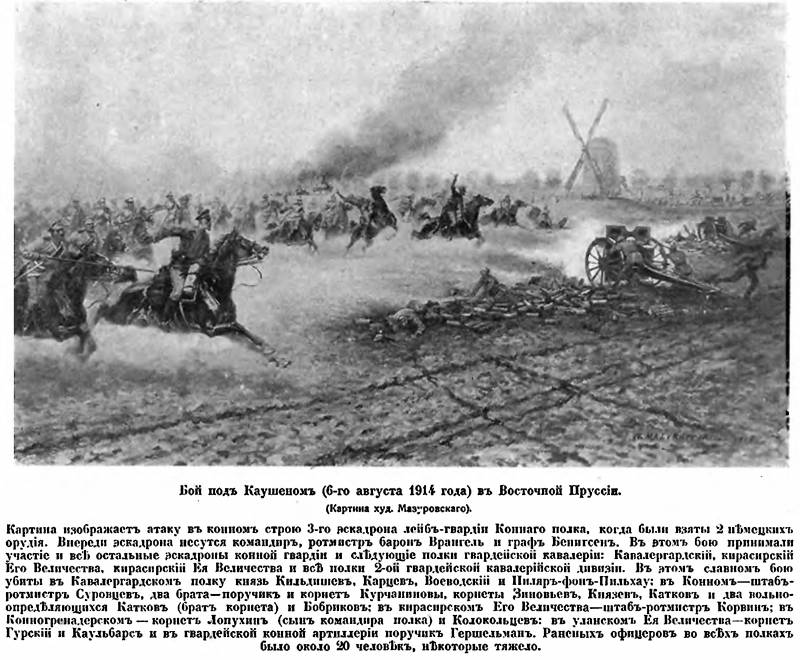 As a result, "The news of the success of the guard and the capture of the German battery quickly spread to parts of the consolidated division, the fire of the German infantry waned, the goals of dismounted Elizavetgrad, Kurland and Novorossiysk troops began to advance rapidly and soon the village of Meshken was busy, the horse batteries moved to the area south of this village and started shelling the village of Kraupishken. "

The Germans began to retreat, and the Russians took possession of the ferries across the river. Inster. 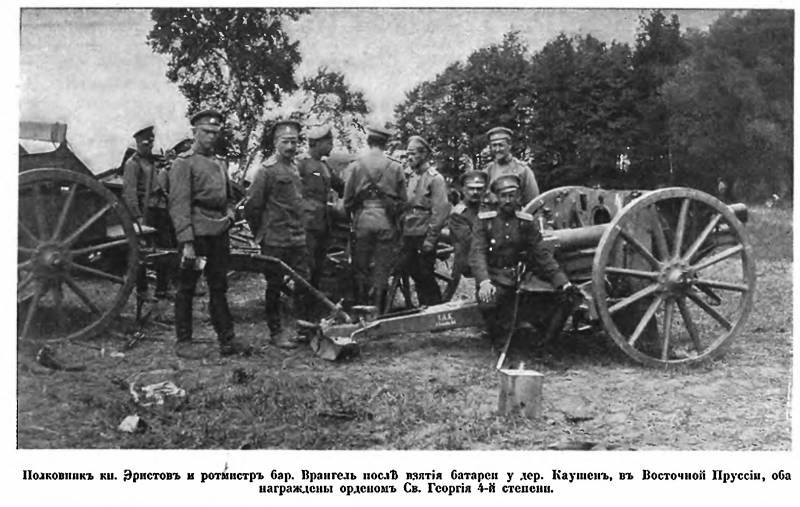 To commemorate the feat, both captured 77-mm guns, as well as the tower and 4 charging drawers, were granted a “gift” to the Horse Guards, finding themselves in the barracks of a glorious regiment. 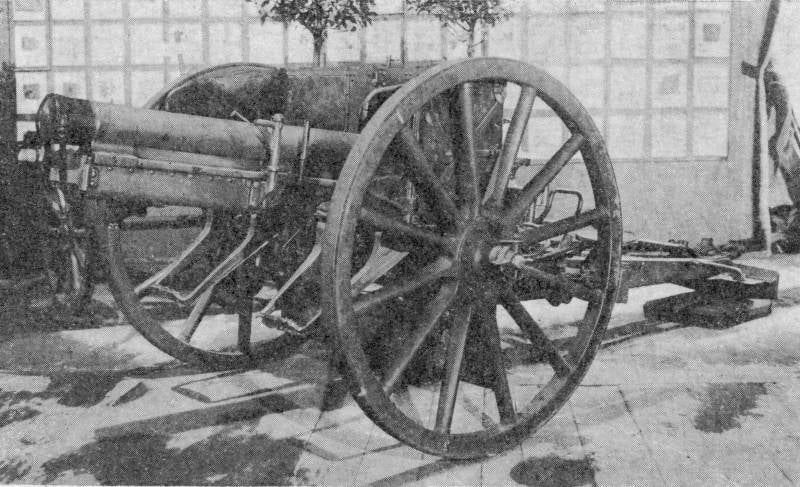 By Order No. 10 for the troops of the 418 Army, for the difference in cases against the enemy 13 on April 1915, he was awarded the George weapons. 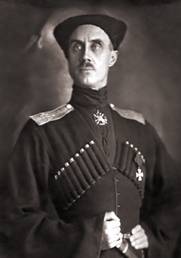 P.N. Wrangel - commander of the 1 Nerchinsk Regiment of the Transbaikal Cossack Army (since 08.10.1915). The regiment was part of an outstanding cavalry unit - the Ussuri cavalry brigade (then - the division). And then he became the commander (from 24.12.1916) of the 2th brigade of the Ussuri equestrian division, transferred to the Romanian front. During this period (December 1915), the baron becomes a holder of the Order of St. Vladimir of the 3 degree with swords. In addition, by the Highest Order of November 27 of 1916, he was granted the 2 of the seniority with the rank of colonel.

In Chisinau, the rumor of an uprising in Petrograd came on 4 — 5 on March 1917. At about 20 hours, General A. M. Krymov read a telegram to P. N. Wrangel informing the Provisional Government of the abdication of the Sovereign and (then) Grand Duke Mikhail Alexandrovich. The next day, orders for this were announced to the Cossacks. P. N. Wrangel wrote: “First impressions can be characterized in one word - bewilderment. The surprise stunned everyone. The officers, like the soldiers, were puzzled and depressed. Two days later I drove to the gene. Krymov (to the headquarters of the division). I found him in high spirits, very optimistic. He sincerely believed that this was a coup, and not the beginning of an all-Russian unrest. When the gene. Krymov read the manifesto of Vel. Prince Mikhail Alexandrovich, I told the chief of staff: "This is the end. This is anarchy."

Order No. 1 and subsequent measures of the tandem of the Provisional Government and the Petrograd Council for the collapse of the army fully confirmed this assessment.

On March 30, A. Krymov was appointed commander of the 3 Horse Cavalry and, in conversation with P. N. Wrangel, said: “Now we must rely on the Cossacks.” “I did not share these hopes,” wrote P. N. Wrangel. In anticipation of a new appointment, he left for Petrograd.

The summer offensive of the 1917 of the year, having begun successfully, ended in failure - the enemy strike groups turned the tide of the operation. The situation was significantly aggravated by the frankly treasonous actions of the decomposed formations and units of the Russian army - those who refused to fight and even left their positions without permission: “Gen. Wrangel in Kamenetz-Podolsk learned that having broken through the front, the offensive ended with the betrayal of the guards grenadiers, who had treacherously withdrawn capital from the front. Dzevaltovsky (Bolshevik). Behind them, throwing positions, the soldiers of the entire XIth army spontaneously fled to the rear. The enemy occupied the mountains. Tarnopol, threatening the flank and rear of the VIIIth Kornilovsk army. Gene. "Wrangel and his division were ordered to withdraw to Stanislavov, covering the flank of the VIIIth Army."

With great difficulty P.N. Wrangel, with his division and temporarily commanding the Consolidated Cavalry Corps, completed this task. His unit distinguished itself by covering the outgoing infantry in the second, retreating stage of the operation. P. N. Wrangel wrote: “Our infantry on the whole front continued to withdraw, without showing any resistance to the enemy. On the day, our front rolled back to 20 - 30 versts. The discipline in the outgoing parts was completely lost. The troops left a mass of stragglers and mercilessly robbed the population on the way. Maneuvering at the junction of the flanks of the 7 and 8 armies, my corps stayed in the transition ahead, continuously waging a rearguard battle. ”

And on the 24.07.1917 of the decree of the St. George Corps Duma (approved by the command of the 8 Army), the general was awarded the soldier George Cross of the 4 degree - for distinctions as the corps commander who covered the infantry withdrawal to the river line. Zbruch during the 10 period. 07. - 20. 07. 1917 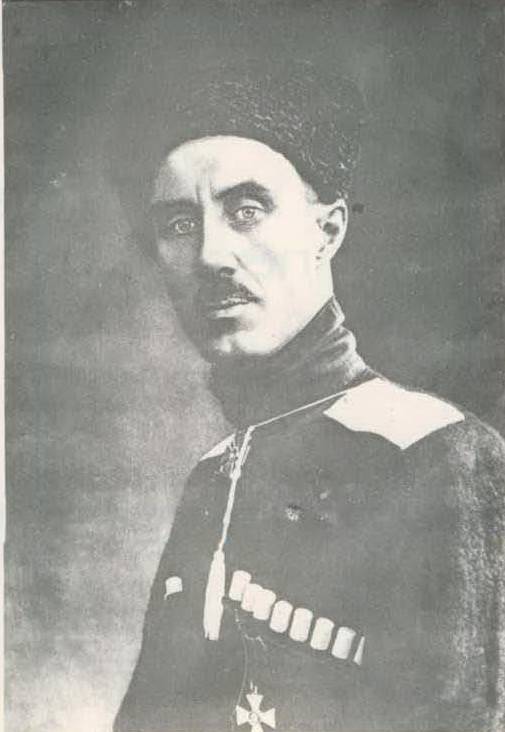 09.09.1917 Mr. P.N. Wrangel was appointed commander of the 3 Horse Cavalry, but since the former commander of the compound General P.N. Krasnov was not de facto removed, he did not take command of this corps.

During this period of his hectic life, the baron was wounded several times and severely shell-shocked.

When the Bolsheviks seized power, P.N. Wrangel, not wanting to serve them, retired and lived in Crimea. The situation was as follows: “In Alupka, Simeiz, Gurzuf lived a number of people of St. Petersburg society. On January 10, a gene was arrested in Yalta. Wrangel. His wife Olga Mikhailovna insisted that she be taken. They drove to the destroyer, moored to the pier. Hours in 8 evenings led to customs at the "military revolutionary tribunal." Chairman, sailor Vakula, after interrogation of the gene. Wrangel turned to his wife: “Why are you arrested?” - “I have not been arrested, I voluntarily came with my husband.” “That's how it is! Why ... come here? ”-“ I have happily lived with him all my life and want to share his fate ”...“ Not everyone has such wives, ”said the chairman. “You owe your wife your life. Go! ”

From his wife Olga Mikhailovna (nee Ivanenko) P.N. Wrangel had 3 children: a son and 2 daughters. 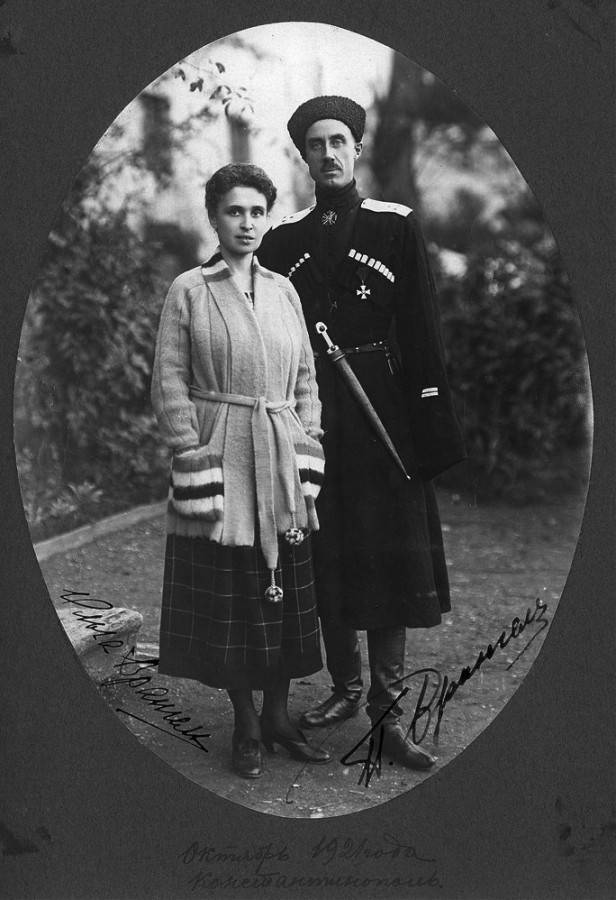 There were continuous searches and arrests at night in Yalta, and P.N. Wrangel and his family moved to Miskhor, where he lived for two months.

He traveled to Kiev several times and met with the hetman P.P. Skoropadsky. P. N. Wrangel categorically refused to his repeated offers to work together for the benefit of Ukraine.

Unable to remain an indifferent spectator of the all-Russian tragedy, the general went to Rostov and then to Ekaterinodar.

Author:
Oleinikov A., professor of the Mogilev branch of the BIP (Belarusian Institute of Law)