November 4, 2019
55
Project "ZZ". In the spring of 2020, the US Army will transfer thousands of its soldiers to Europe. New exercises will show the Kremlin: the West is still full of strength. While the Americans rattle weapons, in Russia they talk about the world. Moreover, there are suggestions that they want to nominate President Putin for the Nobel Peace Prize. According to Sergei Markov, Secretary General of the Russian-Turkish public forum, there is no better candidate for a prestigious award today. 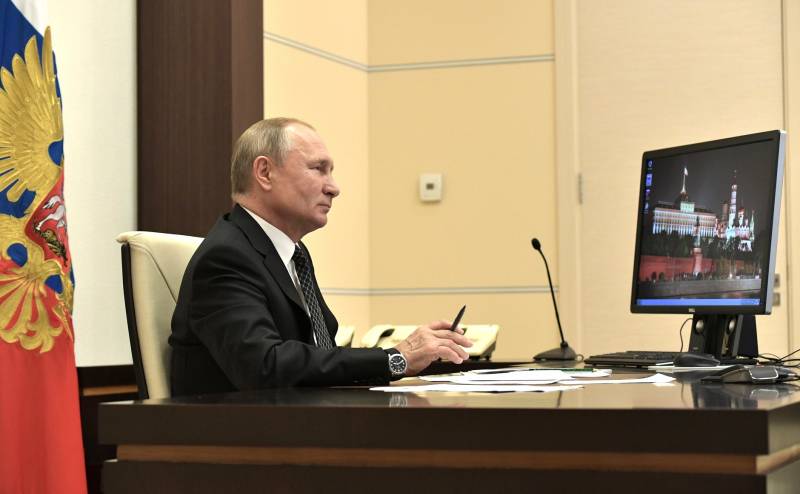 America will save Europe from the Russians. At own expense

The scenario for the upcoming 2020 exercises in Europe is clearly built on the Russian threat.

The “operation” may begin with interruptions in electronic banking and false messages “about violence against Russian minorities,” Berlin political correspondent Peter Carstens writes enthusiastically in a German publication «Frankfurter Allgemeine Zeitung» (FAZ). Organized demonstrations would then lead to street clashes; armed “bizarre volunteers” would rush across the border — then to defend women and children. Finally, something like a “military march” would happen along this border. Similar scenarios “concern Estonia, Latvia and Lithuania”. And they "demand a response from Europe." “And from the USA,” the journalist concludes.

Is America ready to protect Europe from an emergency attack? The journalist recalls Donald Trump, who reproached Germany for his insufficient contribution to the cause of NATO, and then proceeds to assess the strength of the Baltic countries. According to him, the military of Estonia, Latvia and Lithuania alone, that is, without outside help, could defend no more than two days. Therefore, they can only hope for NATO, said Peter Carstens.

Remembering the Ukrainian events of the 2014 year, NATO is strengthening its power in Europe. Three battalions under the command of the British, Canadians and Germans were deployed in the Baltic republics. Airspace plow NATO planes. An “aggressor” (meaning Russian forces) must be aware that when attacking parts of NATO, he will have to face the full power of the alliance.

True, this is reassuring under one condition: if the help indicated does indeed come, and will come quickly.

According to General Christopher Cavoli (commander of the US Army in Europe), the time has come for a new large-scale move. In the spring of 2020, the U.S. Army is about to transfer over twenty thousand of its soldiers to Eastern Europe. Over the past 25 years, nothing like this has happened in Europe. The Defender 2020 maneuvers will become the largest exercises in the quarter century with the transfer of troops. Thirty seven thousand participants in the exercises, thirty-three thousand, will arrive on the eastern flank of NATO together with the armed forces and soldiers already stationed here from a dozen allied states tanks, units of armored vehicles, trucks and containers. No, it’s not Europeans who pay for all this. As reported in the material, US troop transfer funding is approved by the US Congress.

While Americans and Europeans train in war, Russians reflect on peace.

There are suggestions that Russian President Vladimir Putin intends to nominate for the Nobel Peace Prize. According to Sergey Markov, Secretary General of the Russian-Turkish Forum, there is simply no better candidate for a prestigious award today. 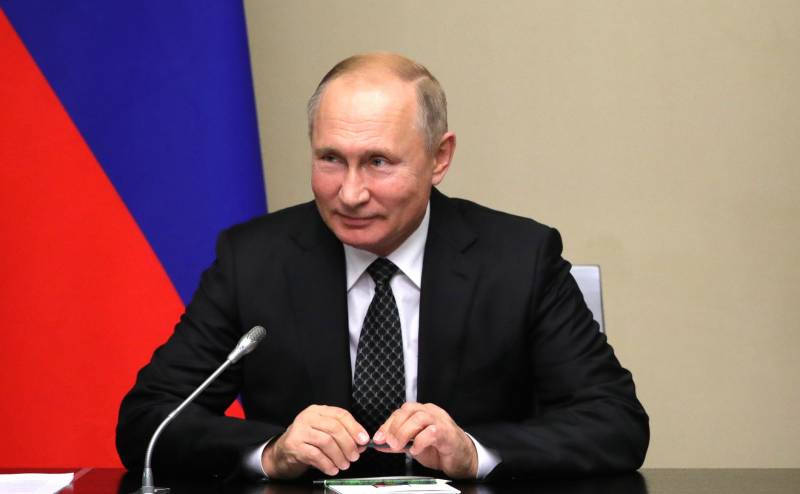 Nemtsova colorfully imagines how such a nomination (“a dossier on a former KGB officer”) could look “from the outside”. Will the list include “the world of graves imposed on civilians during the second Chechen war at the beginning of Putin’s presidency?” Or will the nomination be based on “support for quasi-states separated from the Republic of Georgia?” Or will it include “annexation of Crimea and inciting a separatist war in Ukraine,” which continues to this day? ”Or, perhaps, the journalist continues, it will be about a victory in Syria, where Putin“ is a strong supporter of Assad’s dictatorship, which killed hundreds of thousands of people, while half the country's population Gateway to internally displaced persons and exiles? "

This is the opinion of the journalist. But here is another opinion.

General Secretary of the Russian-Turkish Public Forum Sergei Markov, close to the Kremlin, told The Daily Beast that there is no better candidate for a prestigious award than Putin.

“Most Russian government officials find that President Putin deserves the Nobel Peace Prize for saving the world from a nuclear war during the Ukraine crisis in 2014 — for restraint and non-introduction of Russian troops into the cities of Kharkov, Dnepropetrovsk, cities populated by Russians,” Markov said and added: “Of course, Putin should be given a bonus for resolving the Turkish-Kurdish conflict, which threatened to take thousands of lives.”

“Forget about the attempts of US President Donald trump to get a credit of trust for a ceasefire agreement with Ankara,” says Nemtsova with malice. “Putin’s supporters in Moscow believe that only Putin managed to find a solution and negotiate a deal with Turkish President Recep Tayyip Erdogan, who prevented Turkish-Kurdish bloodshed.”

She further cites Alexei Venediktov, editor-in-chief of Ekho Moskvy radio station. High-level sources told him that Putin’s deal in Syria was like a “new Camp David agreement.” Thus, Venediktov puts these achievements on a par with the 1978 agreement of the year, concluded with the mediation of President Jimmy Carter and ending the war between Israel and Egypt.

The Russian leader, Nemtsov believes, has sought to receive the Nobel Prize for "many years." Ever since the Time magazine named Putin “Person of the Year” in 2007, Kremlin ideologists have argued that the West recognizes Putin as an outstanding peacemaker.

Putin’s greatest achievement in this regard probably occurred in the 2013 year, the author continues when US President Obama pondered the possibility of delivering major military strikes against the Bashar al-Assad regime (“retaliatory strike for using chemical weapons”), and Putin came up with a peace plan. First of all, "he convinced Assad to admit that he had a chemical arsenal, which he had never done before," says Nemtsova. Assad then agreed to a U.S. inspection. According to all reports, the vast majority of terrible weapons were destroyed. At that time, "it seemed to be a prevention of a major war and, therefore, a road to peace." Therefore, Nemtsova writes further, at the beginning of 2014, the Russian human rights group “International Academy of Spiritual Unity and Cooperation of Peoples” nominated Putin for the prize.

However, quite a lot of time passes between the nominations at the beginning of the year and the awards at the end of the year. The journalist again writes about the "capture" of Crimea, its "annexation" and its introduction into Russia. What followed was "support for separatist rebels in eastern Ukraine." The death toll, the author writes, soon reached thousands; hundreds of thousands of people were displaced.

The Nobel Committee awarded the 2014 Prize of the Year to Kailash Satyarti and Malale Yusufzai.

As for the Kurds in Syria, Nemtsov quotes President Putin’s press secretary Dmitry Peskov, who recently said that over the past few years, the United States has been the closest ally of the Kurds and eventually abandoned them and actually betrayed. “Of course, the United States looks stupid and insidious,” the journalist puts in her five cents. “But some analysts think it's too early for Russia to gloat.”

For example, David Aaron Miller of the Carnegie Endowment for International Peace says that Russia's achievements cannot be overestimated. Moscow is now at the helm of a ruined country, and it will take years and billions to restore it. The rogue regime in Syria will continue to “repel the majority of the Sunni population.” In addition, the Russians are “fettered by responsibility” in the corners of the Syrian-Turkish-Kurdish triangle. In addition, the Israeli-Iranian conflict looms.

Tania Lokshin, deputy director of Europe and Central Asia for Human Rights Watch, went even further, saying in her commentary for the publication that the very idea of ​​presenting Putin with the Nobel Peace Prize is ridiculous, because over the years of the “dirty war in Syria "the Russian military" violated international law by using illegal weapons to bomb hospitals and clinics. "

“However, the dream is still alive, revived by the agreement on the withdrawal of Kurds from the area near the Turkish border,” Nemtsova writes. In evidence of her “living dream,” she cites a message from the Russian site riafan.ru, which states that foreigners are offering to award Putin the Nobel Peace Prize in Syria. ”

Such a message, note in conclusion, really exists. Here link. However, the note deals only with a few readers from the Internet. Readers with a British residence permit. Where these readers come from is completely incomprehensible. The publication reports about them like this: "Foreign Network Users."

As for the "official" nomination, then about this same site писал last year. In May 2018, the head of the State Duma Committee on Defense Vladimir Shamanov at the opening of the exhibition “Establishing the Fates of Missing Defenders of the Fatherland. Immortal Regiment "said that public and political organizations in Russia plan to start collecting signatures for the nomination of Vladimir Putin for the Nobel Peace Prize. According to Shamanov, Putin personifies the international movement Immortal Regiment, whose goal is to preserve the memory of the liberating heroes who defeated the fascist army.