November 5, 2019
17
The Paraguayan fleet, which has no direct access to the sea, due to the fact that it operated exclusively on rivers, i.e. in a less aggressive freshwater environment, now it is a kind of naval museum afloat. One of these "museums" is the patrol ship Captain Cabral, named not after the famous discoverer and explorer Pedro Alvaris Cabral, but in honor of the hero of the Paraguayan war (war of Paraguay against the South American "triple alliance" of Argentina, Brazil and Uruguay) captain Remigo del Rosario Cabral. 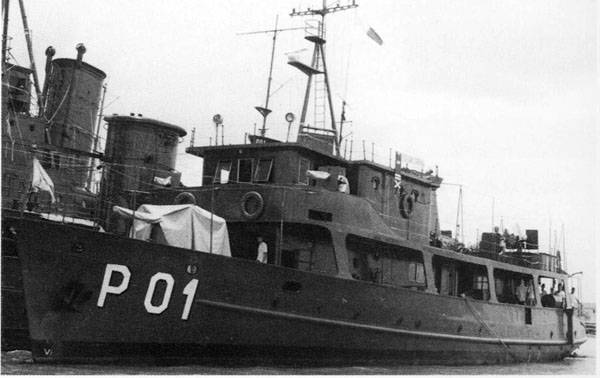 Our more than a century old man was born in distant Holland in Haarlem at the Conrad-Stork shipyard. Now the shipyard is part of the Royal IHC company, engaged in the development and production of various dredging vessels and dredgers.

Known now as a patrol ship, the Captain Cabral was quite a peaceful steam-powered coal-powered tug at birth, and was called the Triunfo. They planned to use it in the construction and development of the river ports of Paraguay. The large rivers of this country allow even small ocean vessels to pass through inland waters directly to the capital port of Asuncion. A new Paraguayan tugboat was launched in the 1907 year, and full operation began in the 1908 year.

The performance characteristics of the vessel were quite modest even in those days: 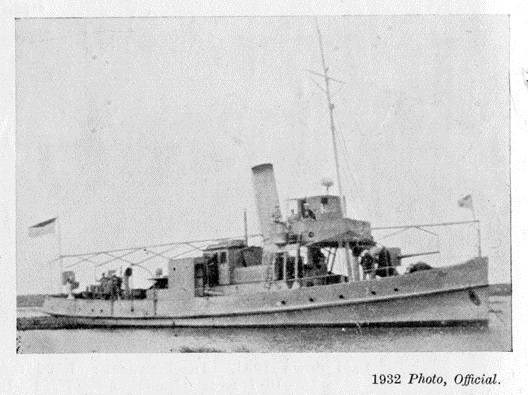 Over the next seven years, the tugboat worked peacefully as part of a civilian fleet Paraguay. On February 15, 1915, the ship was removed from the lists of the peace fleet and immediately transferred to the balance of Armada de Paraguay, i.e. Navy of Paraguay. This was due to violent political upheaval within the country. Over the first two decades of the 20th century, more than a dozen presidents and more than twenty governments have been replaced in the country. Large landowners, financiers and, of course, the military fought for power.

And since by the 20s, nothing aviation Paraguay was out of the question, and the entire army was barely 5000, the presence of a trump card in the form of a warship with enough weapons for that time brought the military into the ranks of the country's main political force. So, the former “Triunfo” became a patrol ship and an aviso ship with weapons in the form of a 37-mm Vickers automatic gun. Most often, the ship was used as a military vehicle with the possibility of fire support.

In the 1922 year, during the rebellion of Colonel Adolfo Cerife, the army and navy were split. The refitted Triunfo remained loyal to the incumbent president and did not allow the rebels to seize the capital, although the rebel troops had superiority in cavalry. The war lasted until the 1923 year. All this time, Triunfo plowed the Paraguayan rivers, blocking the coast occupied by the rebels. The war ended in favor of the adherents of the president. 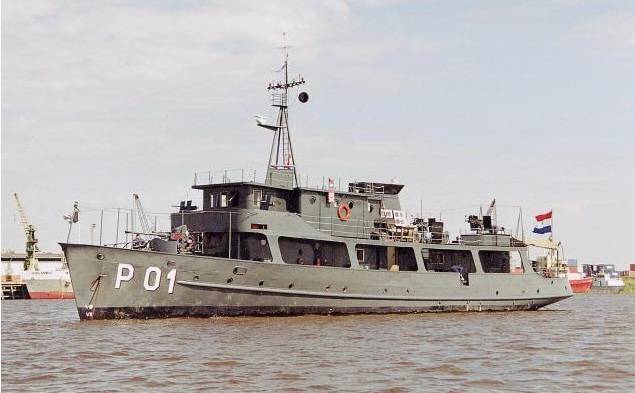 In the 1926 year, the ship was again put on rearmament. The existing weapons were clearly not enough to solve the tasks. The ship received one 76-mm gun and already two automatic Vickers 37-mm guns, becoming the third ship in terms of artillery armament in the Paraguayan fleet. In fact, now it was an artillery boat.

On July 30 of the 1930 of the year, Triunfo was renamed the Capitan Cabral in honor of the hero of the Paraguayan war captain Remigo del Rosario Cabral. Just two years later, the Chak war broke out for the possession of the Gran Chaco region, in which oil producers were supposed to discover black gold. “Captain Cabral”, along with other ships of the small Paraguayan fleet, immediately joined the battle against the Bolivian forces. Just like the river gunboats Umaita and Paraguay, Cabral transported cargo and soldiers along the river arteries to the front, provided artillery support, and counteracted the actively used Bolivian aviation, thanks to the installed Vickers guns and additional ones already installed during the period war three anti-aircraft machine guns.

In the 1935 year, the bloody Chak Bolivian-Paraguay war ended. The exhausted "Cabral" was put in for repair. During the repair, the ship was converted into a training ship. In its new quality, Cabral was operated up to the 1945 year, i.e. until the country plunged into yet another turmoil.

Loyal to the government again

In the 1940 year (actually as a result of a conspiracy among the army) Ihinio Morinyogo came to power. According to the old South American tradition, he instantly abolished the unions that prevented him, imposed censorship, and began repressions against his political opponents. In 1947, the patience of the people, and most importantly the political opponents of Ihinio, burst. The split of society split the armed forces. 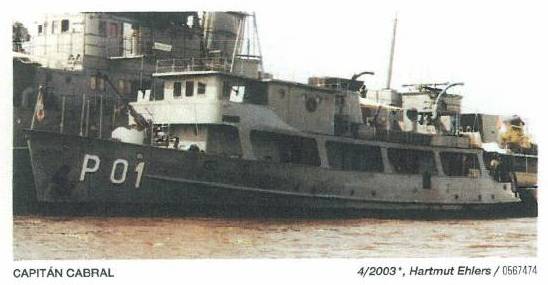 The gunboats Umaita and Paraguay, which were being repaired in the Argentinean Buenos Aires, rebelled and declared their support for the rebels. The dictator Morignigo immediately lost two fleet flagships, which were also the heroes of the Chuck war. Automatically, Cabral’s status instantly increased. In fact, now this ship was becoming the new flagship of the fleet. Therefore, it was Kabral, which remained faithful to the “legitimate” government, that took an active part in suppressing the rebellion. And after some time he was sent to hunt for the rebellious cannabis. True, he could not capture them. However, the rebellion choked. The irony of fate, however, was that in the 1948 year, the military all the same toppled Ichinio.

In the 1958 year, “Cabral” was again put up for repair due to the need for deep modernization of this naval veteran. In particular, coal bunkers even at that time were already some kind of anachronism. In addition, most often not even coal, but wood was used as fuel. Finally, the ship was converted to oil. 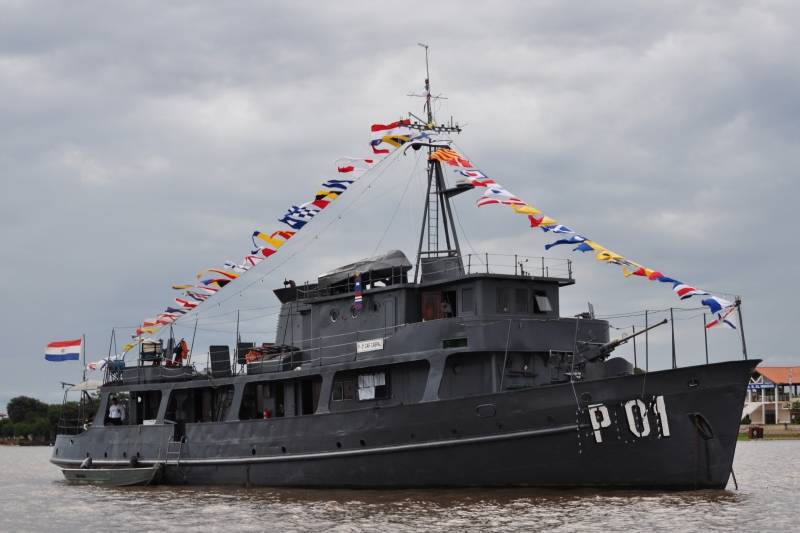 Until the 1981 year, Cabral continued to perform patrol functions. In 81, they decided to re-equip this museum exhibit. The ship was brought into the Arsenal de Marina in Asuncion. Cabral received a new superstructure, steel replaced the wooden deck, and the new engine was a Caterpillar 3408 diesel engine with 360 horsepower. Speed ​​increased to almost 10 nodes. Weapons have also changed. After modernization, the ship carried one 40-mm Bofors gun, two 20-mm Oerlikon assault rifles and two 12,7-mm machine guns on board.

The old man is back in business

Eternally restless South America could not do without coups and conspiracies. Each next “democratic” leader instantly transformed into a dictator greedy for power. Such a dictator was Alfredo Stroessner, who came to replace a whole string of temporary workers, later his regime would be called stronistic.

In the 1989 year, i.e. after almost 35 years of dictatorship, a military coup began. This time, contrary to the tradition of being faithful to the official authorities, the Captain Cabral ship did not just support the rebellious troops of General Andrés Rodriguez. 3 February 1989-th year the ship withdrew from the parking lot. Having walked along the Paraguay River to a position favorable for artillery shelling, Cabral opened fire on the capital, or rather, on the building of the Congress of Paraguay. This time, the coup was a success, not least because of the unanimous support of the rebels by the fleet. 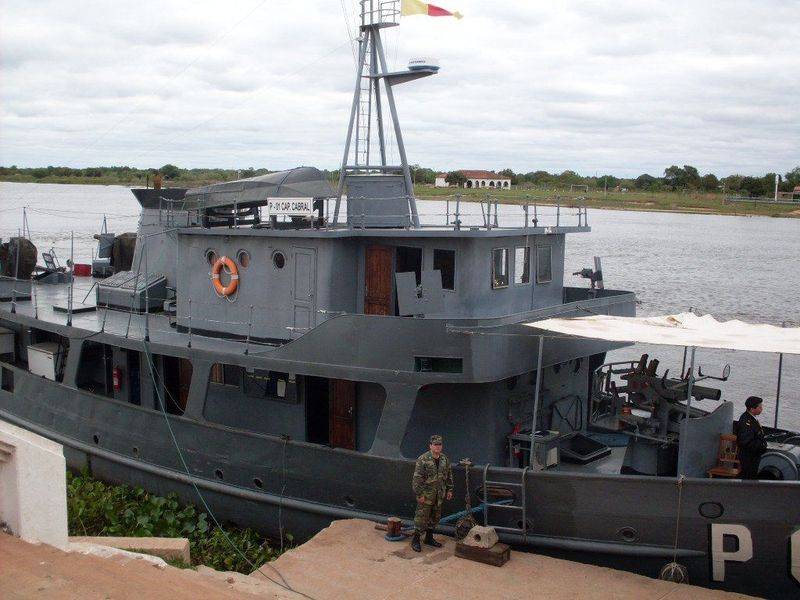 Cabral at the pier of the capital

Now Captain Cabral is actually retired, although it is still listed in the Paraguayan fleet. But most of the time the ship, which has already exceeded 110 years, is used as a inpatient confined to the pier. In addition, part of it already works as a museum. So, a steam engine replaced with a diesel engine is exhibited in one of the museums of Asuncion. Will the whole Cabral become a museum, time will tell.