Will there be humans fighting robots?

November 2 2019
46
While in Russia they are discussing with enthusiasm all sorts of interesting products (Poseidons, Petrels and Nudoli), another wave of futuroshock is rolling in the West, associated with fears that combat robots developed in the bowels of American companies associated with DARPA and military industrial complex, as if in the future they can ... there are people. 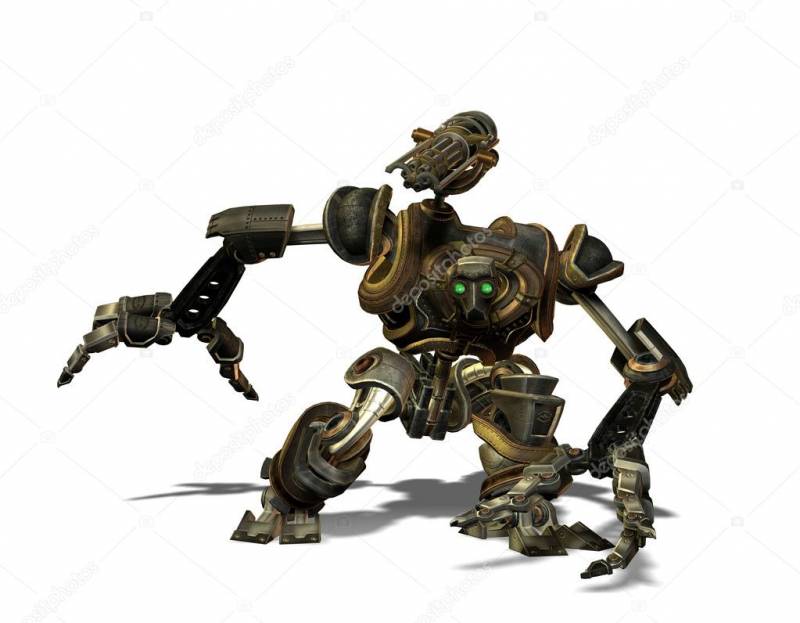 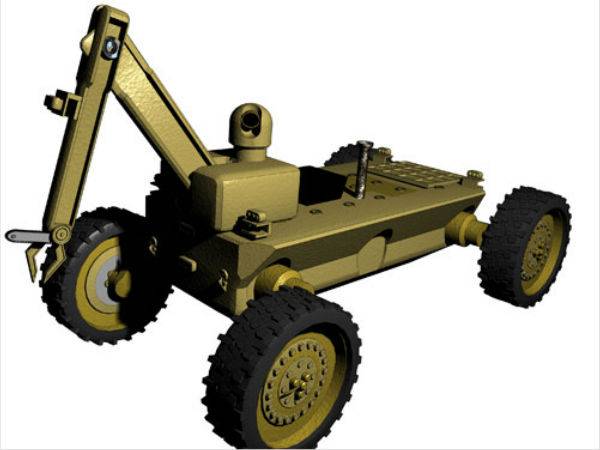 The overall look of the EATR

Even the president of Russia Vladimir Putin was dragged to this company. The British newspaper The Sun, 22 of September 2017, published a short article stating that Putin had asked the head of Yandex, Arkady Volozh, when these robots would "eat us." Volozh answered: "I hope never." It is not difficult, however, to verify that in reality, during Putin’s visit to Yandex, it was about artificial intelligence, and not robots eating humans at all. All the same, what a spreading cranberry the British newspaper treats its readers!

A bit about the EATR project

This is a robot, the power plant of which is an advanced version of the steam engine - the Cyclone Waste Heat Engine, a six-cylinder radial engine that, as its creators write, can convert 146,5 kW of thermal energy into 10 kW of electric energy. The design of the engine is similar to a radial aviation engine. The necessary steam is generated not in the boiler, but in a metal tube rolled into a tight coil, which is placed inside the combustion chamber, in which any liquid fuel burns; but there is also a version for wood fuel - pellets. Steam is supplied to the ends of the cylinders, leaves the crankcase with a crankshaft, partially condensed there, and then the gas-vapor mixture is discharged through the outlet pipe. The rotation of the engine drives an electric power generator. The electricity stored in the batteries is used to set the robot in motion and power its equipment. 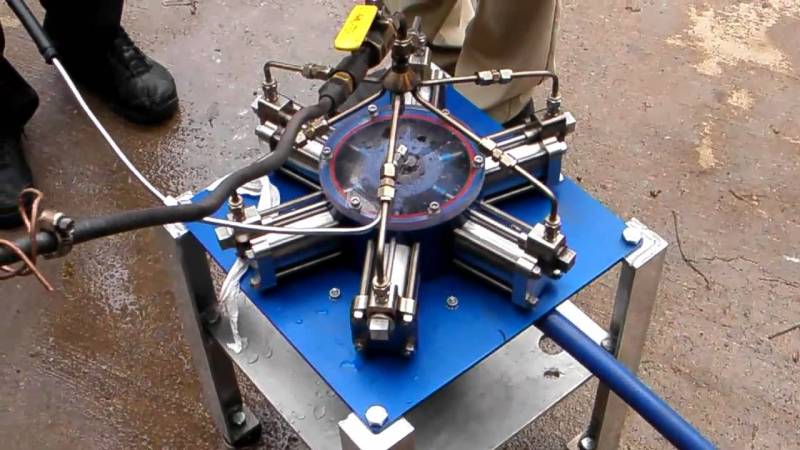 This is the engine assembly and during testing. In addition to the 6 cylinder version, the company is also working on an 12 cylinder engine 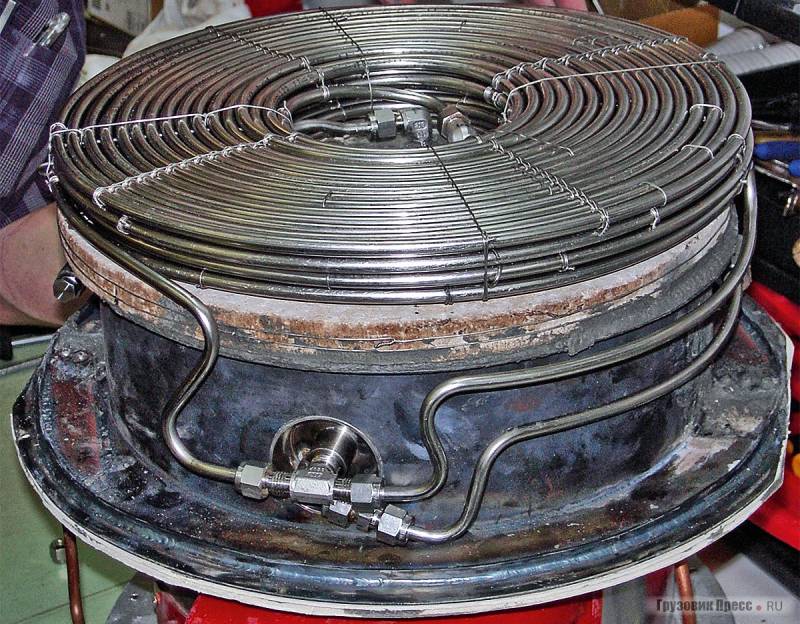 This is a steam generator installed above the fuel combustion chamber. This unit does not have a steam boiler. Developers also tested a solar heater to produce steam in such a steam generator.

Judging by the video published by the developers, the power plant turned out to be very compact. The engine is about 50 cm in diameter, the entire installation is about 1,2 meters high. But still not so compact as to install it on a small robot. However, on the prototype, the creators did not particularly strive for compactness.

To heat the steam generator, the development companies assumed a wide variety of fuels: gasoline, kerosene, vegetable oil, and even solar energy. Chicken fat also appeared in the list of fuels, but in general, the developers in their advertising talked about the use of biomass. Like, a robot can independently produce fuel for itself, like a living organism, which would be the equivalent of eating. Further, the developers became victims of their own advertising, because the public understood this all so that the project involves devouring the corpses of people. After all, this is a combat robot, autonomous, and here also chicken fat in the list of fuels. If a robot can use chicken fat, why can't it use, say, fat from the human body?

In my opinion, it’s not very clear where this hysteria came from. Judging by what the developers presented, it was a question of a robot self-procuring organic fuel, primarily wood. In principle, the robot can be equipped with a device for cutting and chopping small trees, branches, shrubs, and loading chopped wood pulp into the feed hopper. Such an automatic machine would be very useful for all kinds of autonomous devices operating in a wooded area, including for military purposes. It is unlikely that on the basis of this engine you can build a compact autonomous robot, as the creators swung. But it’s quite possible to make an energy center for robots, which will recharge their batteries: a kind of self-propelled harvester that works in cycles. Part of the time it stands still and produces electricity (as well as hot water; but the project provides for a closed cycle of water circulation), and the other part of the time travels around the neighborhood and produces fuel for itself, then returning to the starting point.

This is an interesting idea for the military economy of a large and protracted war in which there has been no oil for a long time, since oil fields and oil refineries have long been burned up by enemy attacks. Such a plant, powered by the most affordable and low-grade fuel, can provide electricity for a wide variety of needs. In times of world wars such a device would quickly find application.

Will it be so or not?

In my opinion, fighting robots will not eat people, and for purely technical reasons. Even if such a power plant is reduced and made denser in layout, having achieved a significant reduction in geometric dimensions and weight, nevertheless, it takes a lot of heat to bring it into action. It is relatively easy to obtain from burning fossil fuels. But the corpses of animals and people, as is well known, are not suitable as fuel, because for the most part they are composed of water, and the mass of dry, combustible material is relatively small. You can try to consider other methods, for example, the oxidation of fats, proteins and carbohydrates without burning. Theoretically, a gram of fat gives 4,1 kcal, and in order to boil a liter of water from room temperature, it takes only 8,7 grams of vegetable oil or other fat. However, as far as one can judge, methods for generating energy, or at least a significant thermal effect, from these substances without burning them have not yet appeared. This is probably possible, but not available right now.

But the main argument against this is that trees, shrubs, various herbs are almost everywhere, and in large quantities. Harvesting wood pulp is easier. In addition, other combustible substances can be used: household waste, plastic, rubber, and so on. The procurement of these fuels gives a reliable and highly predictable result. And people - go and catch it first.

Ctrl Enter
Noticed a mistake Highlight text and press. Ctrl + Enter
We are
A great interview with Sergey Lavrov: about Ukraine, Obama and IranWhat you didn't want to know about England
46 comments
Information
Dear reader, to leave comments on the publication, you must to register.