Where to find 64% upgrade of the Russian army?

November 1, 2019
240
In October, many media outlets discussed the figure voiced by Defense Minister Shoigu: 1,5 trillion rubles allocated in the 2015 year are being mastered according to plans, in general, everything is just fine. 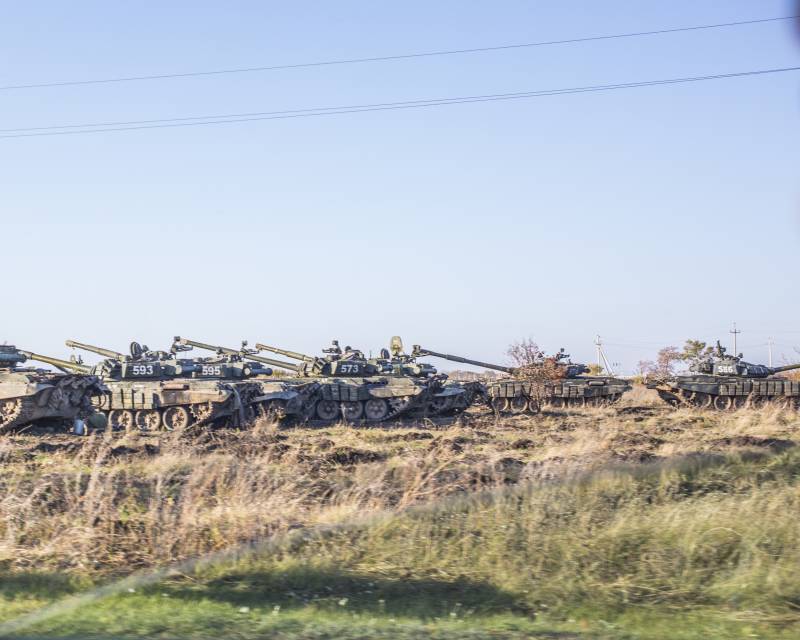 But there are details that I would like to take seriously, and not just shout "Urya!"

1,5 trillion rubles is the sum. It even looks worthy in dollars, because 21 with more than a billion of these greenest ... Well, weighty.

70% and even more, according to Shoigu, is aimed specifically at the purchase of modern weapons and equipment. This is more than a trillion. This is again welcomed, because not money, but already amounts.

“Currently, the troops have received more than 2,3 thousand units of new and modernized equipment.”

Quote from an interview with Defense Minister Shoigu for TASS.

Let's define the terminology. What is new and what is modernized technology?

We asked for clarification where we should go, that is, to the military. Naturally, from the Western Military District, and as an example the 20-I combined arms army of this district will be used.

So, let's start with the new technology. A new technique is one that has not been in use. I translate: UAZ-469, which was removed from conservation and sent to the N-th regiment - this is the supply of new equipment. It is clear that Kozlik did not become a “Patriot”, but it is new.

Exactly the same история with all the rest of the equipment. They wrote off the T-72B of the year so the 1990 of the issue, which trained several thousand mechanic drivers and gunners, and sent instead the T-72B of the 1985 of the year of release from the warehouse for long-term storage. Lubricated, brushed, tinted - and forth. Rejoice at the new technique.

The technique is really new. You can’t complain about it, the mileage is minimal, you understand the barrel yourself, I didn’t really smell gunpowder and stuff like that.

But a slightly different thing can happen. This is when the T-72B 1990 of the year of manufacture is taken and passed through modernization. That is, new electronics and sights are installed on it, and at the output we have the T-72Б3. Yes, with an old (but new mileage) B-46 engine in 900 hp

This is also a modernization. Yes, in the complex, according to the requirements, it would be necessary to replace B-46 with B-92С2Ф, which gives out 1130 liters. s., but then any reasonable person will be outraged. Why throw nowhere new diesel? Sorry, but the tank on which the crews simply train can well use the resource of the old / new engine.

But if into battle ... But it is clear that you have to go into battle a little on others tanksthan those used for crew training. 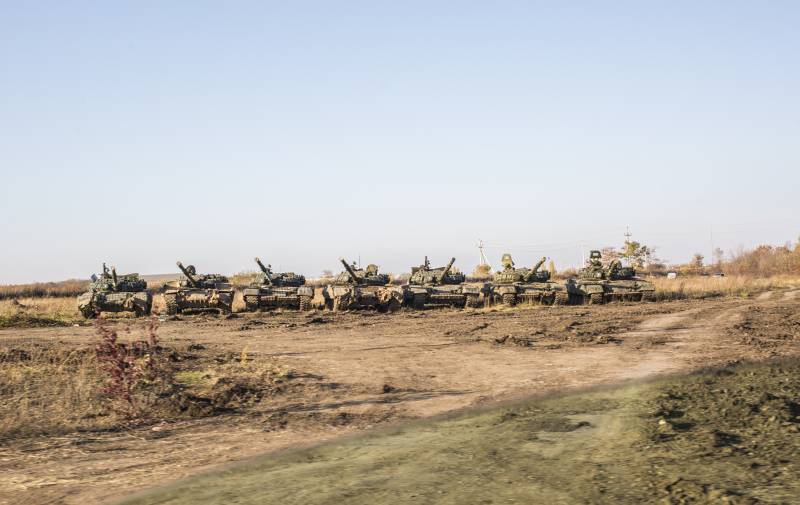 The figure in 2 300 units of equipment that the army received, of course, sounds. However, one should not console oneself with illusions; everything is included in the concept of “technology”. From the tank to the field kitchen. Therefore, KamAZ trucks, which are convoying from Naberezhnye Chelny in all districts, are also new equipment. 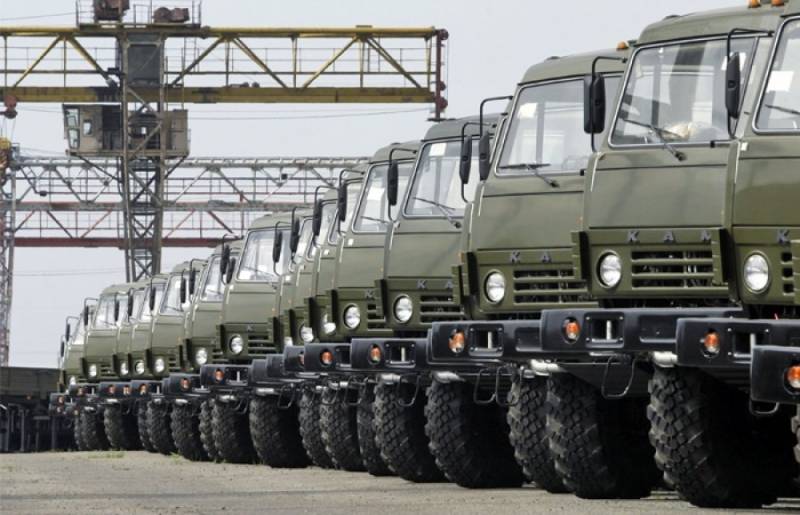 There is no doubt that the truck is a necessary and useful thing in the army, but ...

But let's look at everything in total.

They spoke about the videoconferencing verbose, but about nothing. Everything looks very incomprehensible, if with the contracts for the Su-57 it somehow clears up somehow, then in the field of transport aviation and helicopters are a mess.

Under the contracts, deliveries of new fighters are in progress, we won’t argue with this, but the general trend is somewhat vague. And where in the videoconferencing you can find 64% updates in terms of technology, I can’t take it.

Given that to increase purchases of Su-57 fighters and Mi-28NM helicopters, Putin's classic shout was again required. Yes, there is talk of promising contracts for additional Ka-52 attack helicopters and for the modernization of Su-34 bombers.

But we are well aware of what the term “perspective” means. It can be translated in any way. Including in a very uncertain time.

Meanwhile, even if not towards the aerospace forces, but towards aviation, strengthening and reformatting of the airborne forces will require a large number of transport aircraft, both airplanes and helicopters. And there is nothing definite yet on this score.

Well, here is the constant publication on the topic that “just about” the procurement of C-500 will begin.

Returning from the beginning, I’ll just say: I don’t understand where in the modern ground forces these notorious 64% can be found. It would probably be nice to explain this not just by dumping the numbers on the head of the average man, but by showing and telling.

So far, everything that had to be seen in the same 20 Army is not at all optimistic.

Why exactly 20-I combined arms? Everything is simple. If anyone has to take the first strike in the western direction, this is precisely this army. We can talk about the eastern direction, but it is doubtful, to be honest.

We still have only one direction, from where surprises can be expected. And this is traditionally western.

Boomerangs and so on? No. BTR-82A. I’m not saying that bad is rather better than it could be.

They say (and we wrote about this too) that Buk-M53 complexes appeared in the 3th anti-aircraft missile brigade, but we cannot confirm their presence. They were either top secret, or the crews mastered them, or the complexes left for firing ... In short, I’m not sure that they are there at all.

I can continue to infinity, but here's a shot from the city of Valuyki, Belgorod region. From 15 to 25 kilometers to the border with Ukraine. There stands the 3th motorized rifle Wislen Red Banner, the orders of Suvorov and Kutuzov Division. 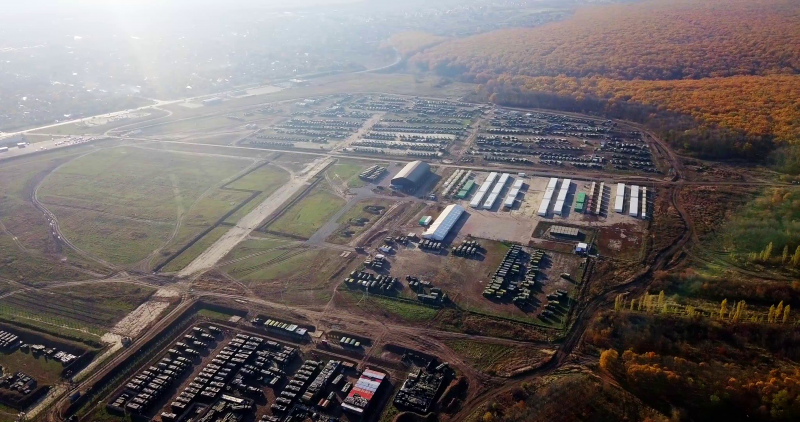 Here are the pictures, maybe someone will see there “Almaty”, “Coalition” and everything so modern. We did not see.

С fleetAs you know, everything is not going smoothly with us. We do not dream about aircraft carriers, cruisers, destroyers and frigates yet, since the possibilities are limited.

From here there is a certain priority of submarines. Specific - this is because a contract has been signed for two Ashes, everything else is hidden behind air phrases such as “you can expect”, “Under certain conditions” and so on. That is, neither Boreev nor Varshavyanka will be over the order.

Interest will be overtaken by boats, diving bots and other small equipment. It is clear and not in dispute that diving bots are also needed, but ... Where are 64% of new ships?

In general, playing with numbers is, of course, a good thing. But it is completely incomprehensible where to look for these 64%? In fact, 2 300 units - this is not so much. Given that in our armed forces there are by no means 10 000 units of equipment, if you think about it, this is not so much. Even if all 2 300 units are KAMAZ trucks, they will still have a couple of pieces in each part. So well-informed people explained to us.

And here the question arises: what lies behind the figure in 64%? And is this figure so true, and is the new technology not new in terms of wear, but in terms of modernity?

And in general, it would be very nice to expand the figure. Just telling how much, what and where it went. What the money pledged to rearm the army took. And it turns out a little incomprehensibly. It seems that the money was spent (our money, taxpayers), something was bought, and what, for someone - was covered in darkness.

And since we were talking about criticism of the Ministry of Defense, I have noticed such a thing for a long time: statements from the press service of the Russian Defense Ministry are simply replete with joyful messages in the future tense. “Next year they’ll get into the military defense zone (for example) ...” “In 2020, the troops will enter ...” “They’ll build it for officers ...” And so on, you understand, we have enough of these positives, specifically with reference to the PS of the RF Ministry of Defense.

And at least once they provided information about what was built, really arrived, and so on.

It is necessary to be more transparent, yet we live in the 21 century. And for a long time already the rainbow figures in the reports, not backed up by anything, are not encouraging, but annoying. And I would like to see a real new technique, not the numbers in the reports.