November 1, 2019
66
On October 29, a solemn ceremony of the delivery of the first modernized main battlefield took place in Munich tank Leopard 2A7V. Now the companies Krauss-Maffei Wegmann (KMW) and Rheinmetall have to upgrade two hundred tanks of various modifications, which will result in a serious increase in the combat effectiveness of the ground forces. According to existing plans, by the mid-twenties, the Leopard 2A7V tank should become the basis of armored units. 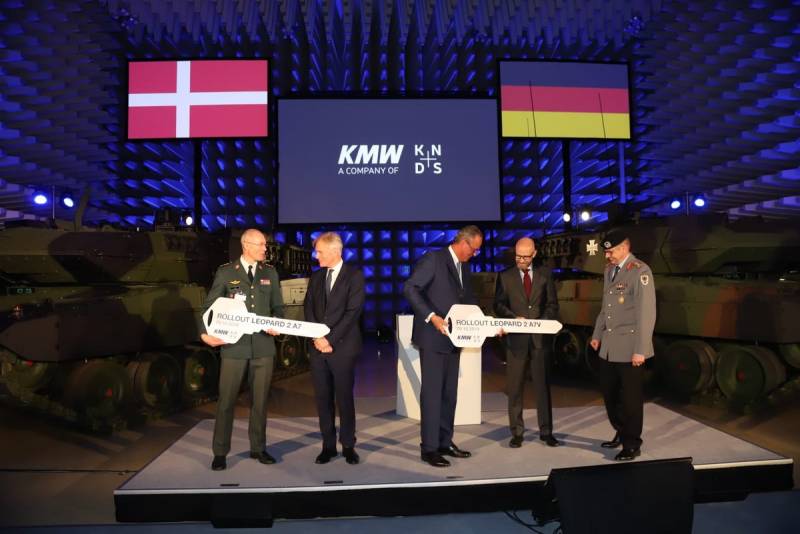 The ceremony of transferring the finished equipment took place on October 29. It was attended by representatives of the military and political leadership of Germany and Denmark. The latter, too, was to receive the first tank, which was modernized according to a modern design.

The “protagonists” of the ceremony were the MBT Leopard 2A7V and Leopard 2A7. The tank with the letter "V" (Verbessert - "Superior") was intended for the Bundeswehr. The Danish army, in turn, received its first Leopard 2A7.

In a festive atmosphere, the representatives of the contracting company presented the military of the two countries with symbolic keys to armored vehicles. In the near future, deliveries will continue, but the transfer of finished machines will be carried out without such ceremonies, in a working environment.

The Leopard 2A7V MBT modernization project was first presented to the public in 2016. It offers the replacement of parts of equipment and upgrades of weapons, after which the tank receives new capabilities and increases its characteristics. Quickly enough, the tank of the new modification passed the necessary tests and was recommended for adoption.

In the spring of 2016, the German Ministry of Defense announced new plans for the development of the fleet of armored vehicles. To strengthen the Bundeswehr by 2020, it was proposed to increase the tank fleet from cash 225 to 329 units. The construction of new equipment was not provided, but it was necessary to carry out repairs and modernization of existing MBTs, including according to the latest project "A7V". 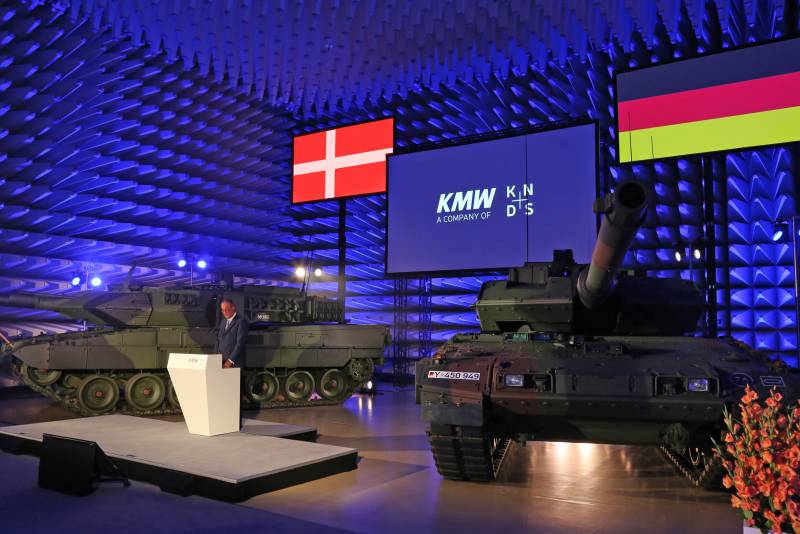 In May 2017, KMW and Rheinmetall received an order to upgrade the first batch of Leopard 2 tanks. Prior to 2023, it is necessary to repair and upgrade 104 armored vehicles of various modifications. For this work, contractors will receive 760 million euros. Under the contract, the 20 Leopard 2A7, 16 Leopard 2A6 and 68 Leopard 2A4 tanks are subject to modernization.

The fulfillment of the 2017 contract will improve the tank fleet not only qualitatively, but also quantitatively. It is curious that of the hundreds of converted tanks, only 20 “Leopards 2A7” previously belonged to Germany. Armored vehicles of the 2A4 version were purchased from Sweden, and the newer 2A6 from the Netherlands. Thus, the contract will increase the existing fleet of armored vehicles by 84 "used" units.

In March 2019, a new order appeared for the repair and modernization of armored vehicles. KMW and Rheinmetall will receive 300 million euros for its implementation. The contract provides for the alteration of 101 MBT Leopard 2A6 and Leopard 2A6M2. These works should be completed before 2026.

Two existing contracts worth more than 1 billion euros provide for the modernization of 205 MBT Leopard 2 of various modifications. Equipment for their implementation will come from German armored units, as well as from third countries.

The purchase of tanks abroad and the return of equipment from storage will allow the Bundeswehr to fulfill the existing plans and to increase the tank fleet to 2020 units by 329. At the same time, the army will have to simultaneously operate MBT of various modifications, including quite old. The process of modernization of equipment for a new project will be completed only in the middle of the decade.

Thanks to the completion of work under the second 2019 contract, the German army will be able to change the structure of the tank units, bringing the share of modern technology to the required values. Also, the Bundeswehr will have some reserve equipment that can be used in the future. 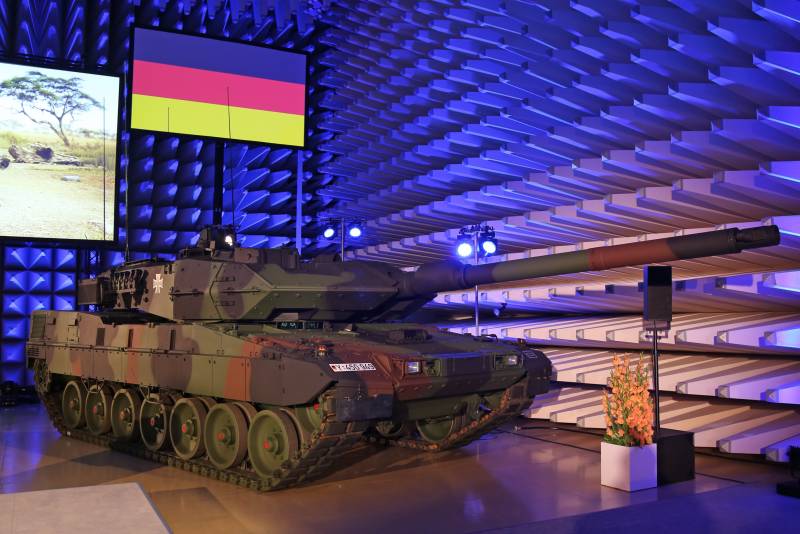 According to two contracts, 2 vehicles of other modifications will be converted to Leopard 7A205V tanks. They will be equipped with four tank battalions in the future. Two more battalions will continue to operate the older Leopards of the 2A6 modification - of the order of 90 units. 32 of the obsolete Leopard 2A4 will be sent for storage.

The Leopard 2A7V project offers the most serious modernization of the basic MBT with the replacement of the mass of devices and instruments. The hull and turret, armament and fire control systems, power plant, etc. are being refined. It is also planned to introduce some fundamentally new devices and products.

However, some features of real serial modernization remain unknown. The Bundeswehr, KMW and Rheinmetall have not yet specified exactly which innovations are used in the mass update of technology. In addition, there is evidence of a “mixed” approach to the modernization of tank weapons. Nevertheless, in general MBT Leopard-2 should receive a host of new systems and devices that positively affect their characteristics.

The survivability of the tank is proposed to increase due to the new mine reservation on the bottom. The hull and turret may be equipped with Saab Barracuda coating. The main engine is not replaced, but supplemented by an auxiliary power unit of the Steyr M12 type for power systems. The habitable compartment receives air conditioning and a new Thales SOTAS intercom.

It is proposed to replace the standard 120-mm smoothbore gun with a modernized Rh-120 L55A1 gun of increased power. According to some reports, only updated Leopard 2A4 tanks, which are carrying a standard 44 caliber gun, will receive such weapons. The newer 2A6 and 2A7 initially had an 55-caliber barrel, and they decided to leave them without an upgraded gun.

All the main instruments of the tank are combined with the combat information and control system IFIS. It is planned to modernize the fire control system, including replacing sights and updating computing tools. In connection with the introduction of new ammunition with a programmable fuse, tanks will receive a MKM system programmer. 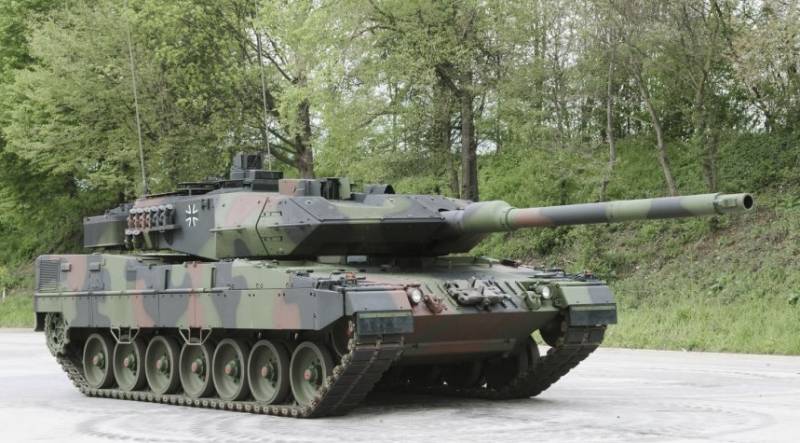 Leopard 2A7 before the upgrade

According to the results of the latest MBT modernization, Leopard 2A7V retains maximum external resemblance to machines of previous modifications, but receives significant advantages of a tactical, technical and operational nature. In addition, due to the repair, the resource is extended.

Tank of the near future

The Leopard 2A7V project was created with the aim of updating the armored vehicles of previous modifications in accordance with current requirements, challenges and threats. With its help, it was proposed to modernize the fleet of military vehicles, extending their resource and providing the possibility of service over the next several decades.

It is expected that by 2026 the Bundeswehr tank fleet will undergo major changes. It is planned to increase the number of MBT by almost a third, as well as adjust the shares of equipment of different models. Almost two-thirds of all tanks will be related to the latest modification of the 2A7V. The share of older machines will decrease as a result of modernization or storage.

The appearance of the Leopard 2A7V project and the subsequent modernization will maintain combat efficiency until the appearance of fundamentally new main tanks. Replacement for the "Leopards-2" will appear only in the mid-thirties. During this period, Germany and France are going to complete the development of the promising MGCS tank and launch its production. Over the next few years, it will be possible to carry out a complete replacement of equipment.

However, until the advent of a completely new MBT, a decade and a half remains, and the current Leopard 2A7V machines have yet to serve. KMW and Rheinmetall have already set up the process of upgrading the available tanks for the new project and have already handed over the first modernized armored vehicle to the customer. Thus, the Leopard-2 tanks remain in service - and for many more years they will form the basis of the Bundeswehr's striking power.