November 1, 2019
22
Today the main rocket weapons Russian fleet become Caliber cruise missiles, according to NATO codification - SS-N-27 Sizzler (“Hell”). At the same time, the first cruise missiles appeared in the Navy back in the late 1950s. These were the P-5 cruise missiles, and later the P-6, for the development of which the designers of the Chelomey Design Bureau were responsible. The appearance of this weapon seriously increased the combat capabilities of the Soviet fleet, which was supposed to withstand the ever-increasing power of the US Navy. 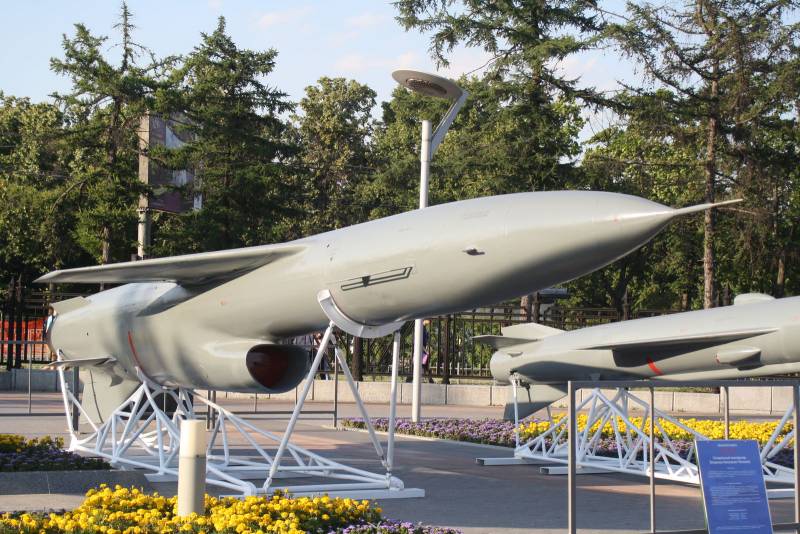 From Fau-Xnumx analogues to proprietary missiles

For the first time, Soviet designers met new missile weapons at the end of World War II. Already in the second half of the 1944 of the year, the German V-1 projectile (V-1), the forerunner of all future cruise missiles, was among Soviet trophies. Also, Soviet engineers were able to get acquainted with the German anti-ship missile gliding bomb or the Hs-239A air torpedo. The new weapons of German designers managed to declare itself during the war years. It could not change the course of the conflict, but was appreciated by the Allies.

The successful use of missile weapons by the Nazis initiated similar developments in the Soviet Union. Already in 1944, the country's first design bureau was established on the basis of aircraft factory number 51 in the USSR under the leadership of the outstanding designer Vladimir Nikolayevich Chelomey. Chelomea Design Bureau specialized in the development of the first domestic projectiles and unmanned aerial vehicles. They worked on the creation of air-based shell aircraft, ground-based, as well as options that could be launched from the board of submarines.

In the period from 1944 to 1953, the designers of the new OKB-51 designed to create a whole family of cruise missiles: 10X, 14X, 16X, as well as ground-based cruise missiles, designated 10X, on the basis of which they also created a sea-based missile, which they planned to install on underwater boats. All these missiles were equipped with a pulsating jet engine and developed a flight speed of not more than 650 km / h. All of these models were created on the basis of the German Fau-1 rocket, the prototypes of which were captured by Soviet troops in Poland even before their first shelling of the British capital. 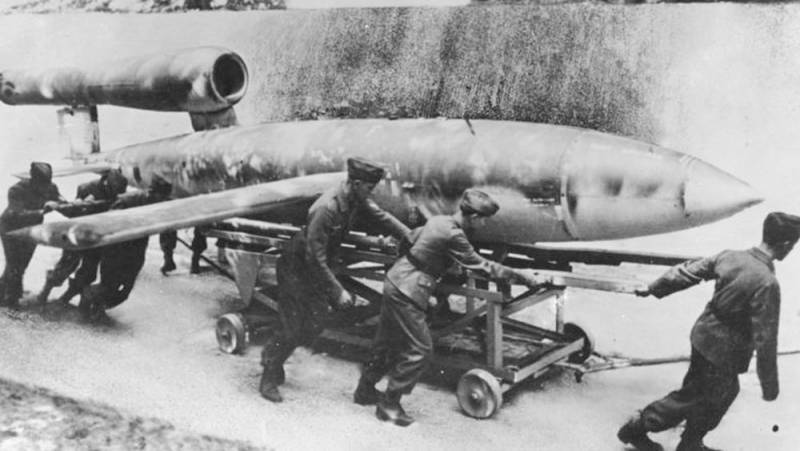 These works aimed at finalizing and radically modernizing the German V-1 projectile, which had become obsolete by the beginning of the 1950's, were unsuccessful. Active work on these projects was carried out until the beginning of the 1953 year. So in the framework of testing in December 1952 - March 1953 of the 15 launched 10XN missiles, only 20 missiles fell into the target, whose dimensions were 20 by 11 kilometers. Despite the modest results, these projects were very important. Soviet designers were able to get the necessary experience in designing new weapons, and Vladimir Chelomei himself formulated his own vision of a more advanced weapon, proposing a real ideology of a new type of cruise missile, we are talking about the P-5 missile and its further development - the P-6. In the future, under the leadership of Chelomey, the Soviet Union created 45 types of cruise missiles, of which 10 was adopted, and 16 managed to pass flight tests during the life of an outstanding designer.

In February 1953 of the year saw the light of the decree of the Council of Ministers of the USSR, which stopped all work on the creation of unguided cruise missiles with pulsating air-jet engines, this type of weapon was recognized as unpromising. At this point, Chelomey already had thoughts on creating fundamentally different cruise missiles, the active development of which in his design bureau officially began in the 1955 year. The new missile, which eventually received the designation P-5, as well as its further development, the P-6 missile, received NATO's SS-N-3c Shaddock ("Pomelo") codification.

The new weapon was new in every sense of the word. The P-5 cruise missile was a truly high-quality leap and a new look at such weapons. The rocket created in the Chelomeya Design Bureau was the first cruise missile (CR) to receive a wing that automatically opens in flight. Prior to this, all samples of the Kyrgyz Republic developed in the USSR and abroad necessarily required pre-launch preparation: assembly of the rocket and opening of the wing. The need for such actions only increased the preparation time for the launch of the Kyrgyz Republic, it was especially critical for submarines, which all this time had to be on the surface, then they did not even talk about submarine launches. An important difference between the new Soviet cruise missiles was also the rejection of pulsating jet engines in favor of turbojet engines. 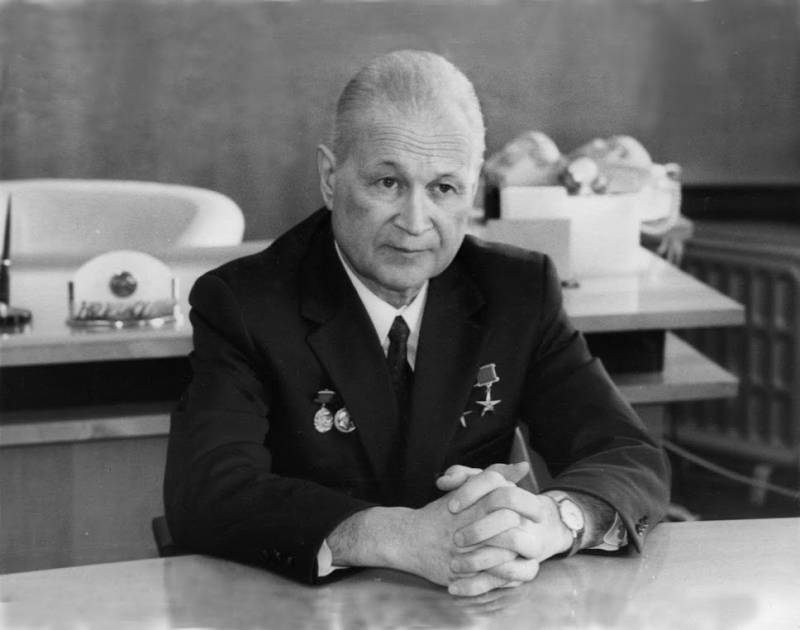 Thanks to the wings opening after the launch, the rocket easily fit into a container of a small diameter of cylindrical shape, in size it slightly exceeded the length of the rocket itself. Launching from a transport and launch container was an important step, allowing missiles to be placed on a submarine, deck of a ship, on a tracked or wheeled chassis. An important feature was the complete tightness of the container, which, among other things, was filled with nitrogen. This decision was supposed to reliably protect the rocket from the harmful effects of the environment.

Work on the new cruise missile was actively conducted from 1957 to 1959 year, and already on 19 June 1959 year P-5 was officially adopted. The operation of the new rocket was carried out until the 1966 year. Initially, they saw a big problem in the new launch concept with a folded wing, many Soviet scientists and designers criticized the proposed scheme, the OKB-52 employee themselves were not completely sure of it, but Chelomei was right, the rocket really flew and grew to the serial model adopted into service.

New technologies made it possible to place the container with the rocket in a horizontal position outside the robust hull of the submarine, while the container rose before launch - the elevation angle was 15 degrees. The turbojet engine was launched already in the container, and the wing was opened after the CR left the container. Compared to the previous P-10 cruise missile, new solutions have doubled the ammunition of the submarine. In the P-10 variant, launch required two rocket lengths for one launcher: the length of the container with the rocket in the stowed position plus the length of the rocket that rolled out onto the launcher. Needless to say, such a scheme was much less convenient. The new Chelomey P-5 missile also markedly reduced launch time, which allowed the boat to quickly hide in depth. Today, most cruise missiles launch in precisely this way with the deployment of the wing after launch, but in the middle of the 1950-s it was an unobvious technical solution, but Vladimir Chelomey and a number of designers who supported him were able to look into the future, and all the accusations of “technical adventurism” turned out to be baseless. 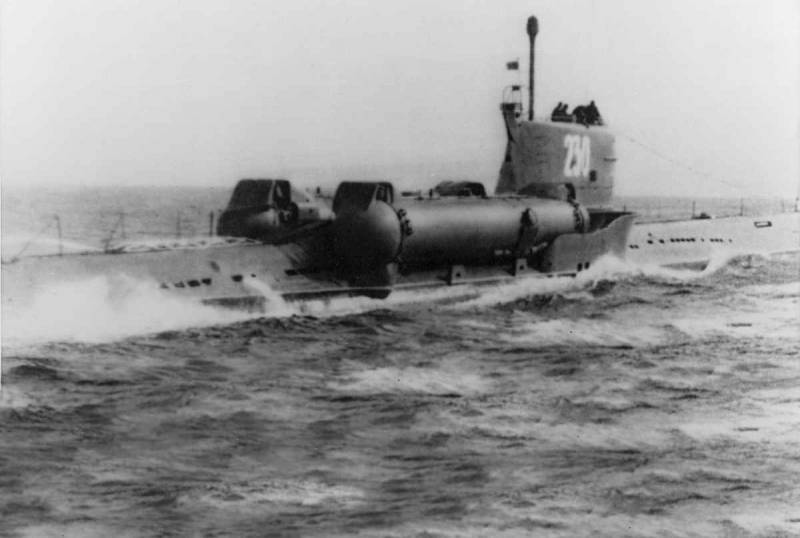 The new KR was created to be placed on board Soviet submarines. The main purpose of the missile was the defeat of objects located on the coast and inland of the likely enemy: naval bases, military and industrial, as well as administrative facilities. The mass of the new rocket together with the starting engine was 5380 kg (without the starting engine - 4300 kg), the mass of the warhead was 830 kg, it was allowed to use high-explosive as well as nuclear warheads up to 200 ct. The missile was supersonic, the marching engine provided the P-5 CR with a maximum speed of 1250 km / h. The range of the missile could vary significantly due to ambient temperature from 431 km (-24 degrees Celsius) to 650 km (+ 40 degrees Celsius). At the same time, the accuracy of the missiles was not the most outstanding, the circular probable deviation was 3000 meters. Effectively, a missile could only be used for striking at large, area targets, while the use of a nuclear warhead became desirable.

The further logical development of the P-5 cruise missile was the P-6 missile, also known as the P-35 anti-ship missile, in the NATO codification of the missile, only one letter SS-N-3a Shaddock changed. The new missile in the P-35 variant was intended for arming surface ships, as well as coastal missile systems, in the P-6 variant for arming submarines. The complex was a new generation of Kyrgyz Republic. Anti-ship missile was able to selectively destroy surface targets, with flexible programmable flight paths. It was on the basis of the world's first self-guided cruise missile P-35 in the USSR that the coastal Redut missile system based on self-propelled launchers was created.

The creation of the new P-35 (P-6) rocket was another step on the road to future Caliber. With the advent of this cruise missile, the domestic fleet, in addition to the P-5, intended for firing at areas (mainly ground targets), also received a means for hitting point naval targets, including moving enemy ships. The advent of P-6 anti-ship missiles was an asymmetric response to the development by the Americans of aircraft carrier forces and the aircraft carrier strike groups (AUG) they create. It was the P-35 (P-6) anti-ship missiles that became the ancestor of a large family of domestic sea and ground-based cruise missiles developed at the Chelomei Design Bureau and armed with the Soviet, and then the Russian surface and submarine fleets. The first surface ships of the fleet, in service with which new KR arrived, were the missile cruisers of the 58 Grozny project. 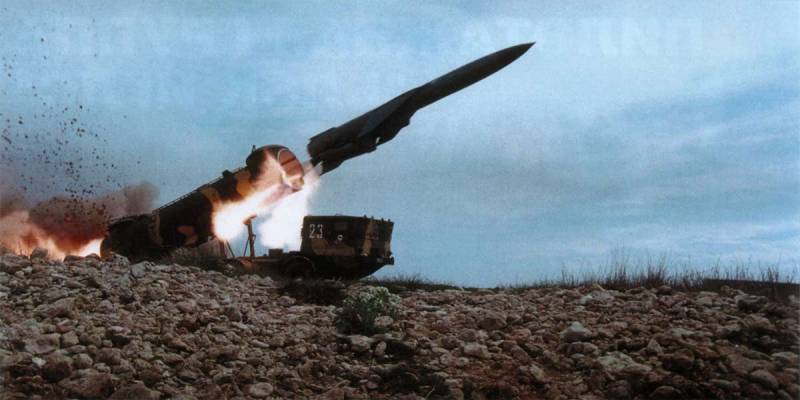 The new complex, adopted in the 1960-s, was intended for the selective destruction of surface targets, which were located beyond the radar horizon. The maximum range of a missile with selective destruction of targets was limited to 250 km, without selective destruction - 350 km. Starting weight - 5600 kg. The flight speed of the Kyrgyz Republic ranged from 1450 to 1650 km / h. The mass of the warhead was 500 kg, as on the P-5, the warhead could be high explosive or nuclear. On the marching section of the trajectory, a supersonic rocket could fly at an altitude of up to 7000 meters, in the final section it was reduced to 100 meters.

The P-6 cruise anti-ship missile received a combined target guidance system: a radio command on the marching section and active radar guidance on the final section of the trajectory, the range of the homing head mounted on the aircraft was approximately 20 kilometers. Like the P-5 missile, it was launched from a submarine only in the surface position. The flight of the rocket was divided into two sections. On the first, it could rise to a height of 7000 meters, this allowed the cruise missile to “look” beyond the horizon, without losing touch with the operator on board the submarine. In turn, the operator, thanks to the presence of a homing head with radio broadcast equipment on the CR, could search for targets. As soon as the enemy’s surface ship was detected, the missile was aimed at the target, the second stage of the flight began for it, which took place at an altitude of approximately 100 meters, while the GPS installed on board accompanied the target until the moment of defeat. 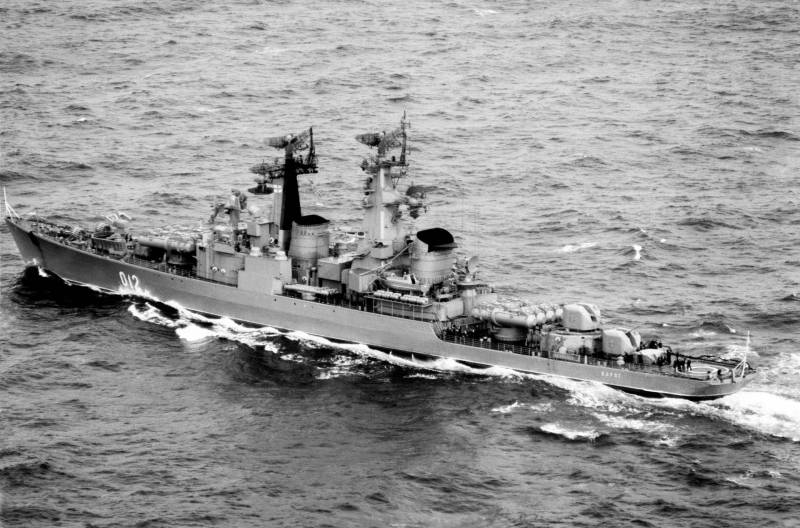 
The appearance and development of the first Soviet sea-based cruise missiles developed at the Chelomei design bureau played a huge role in the confrontation with the US Navy. Soviet anti-ship missiles have become an effective deterrent and a successful asymmetric response to the US carrier-launched strike groups. This concept of deterrence remains relevant for Russia in the 21st century.