Will Starship Spaceship Serve US Army?

Each of SpaceX's ventures can change the fate of the world or has already influenced it, whether the critics of the Mask like it or not. Everyone heard about the first in stories the reusable Falcon 9 space rocket and the Starlink project, designed to give the world an affordable and fast Internet. If in the case of the second there are so far more questions than answers, then the "nine" has long become the most popular rocket in the world in the space launch market. At the end of last year, she made the largest number of starts: all 20, all successful. Due to the start-up cost in 65 of millions of dollars (which is relatively modest by space standards), Mask has more than enough business. And here is the first start of the manned "Dragon" with a man on board on the way ... 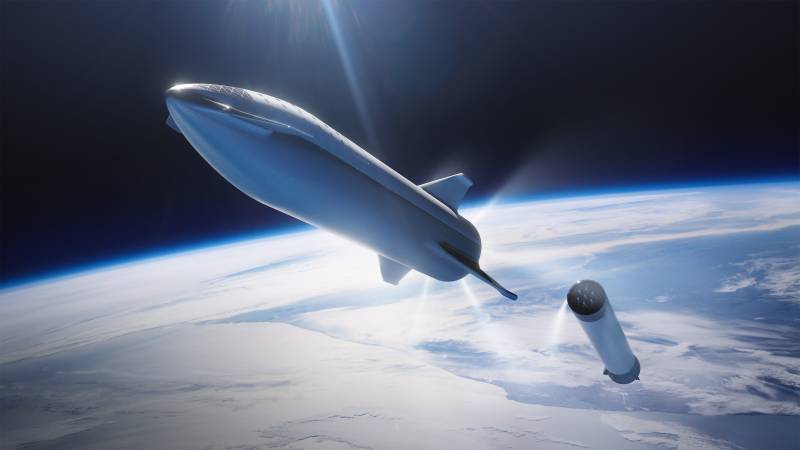 However, all these are toys against the background of the company's most ambitious and, perhaps, the most mysterious project - the project of the giant Starship spaceship, which supposedly can take on board up to a hundred people and with a length of 50 meters will be the largest manned spacecraft ever built . Don't be embarrassed by the ugly Starhopper jumper: they are just technology demonstrators for the ship of the future. All the most interesting is ahead.

Starship itself is nothing more than the development of the Interplanetary Transport System, which, in turn, has become an improved version of the Mars Colonial Transporter system. Over time, SpaceX tempered the ardor, so that the size of the system decreased slightly: if the height of the entire Interplanetary Transport System complex was 122 meters, then Starship and the rocket had “modest” 118. The diameter of the system was reduced from 12 to 9 meters, respectively. But again, this does not make the Big Falcon Rocket (the modern name for the bundle of the new rocket and Starship ship) a less revolutionary project. By the way, reusability is attached. 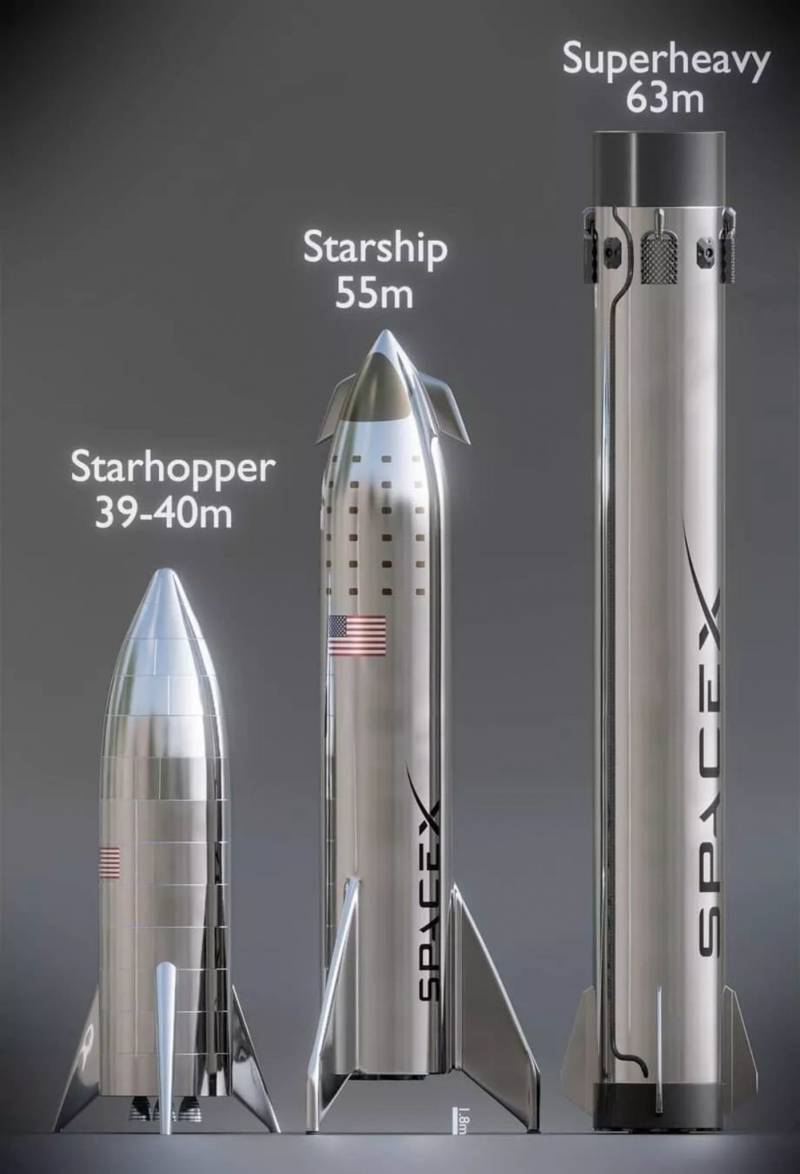 Will everything secret be revealed?

In connection with Ilon’s serious plans, experts have long wondered: why is this all necessary? To supply the ISS, the Americans have (or rather, will) relatively simple and cheap ships Crew Dragon and CST-100. For flight to the moon, the States have already decided to use Orion: it will also be used to supply the future Lunar Orbital Platform-Gateway lunar orbital station. By the way, back in 2017, Donald Trump signed the "Directive No. 1", which implies the return of the United States to the satellite of our planet. US Martian ambitions finally went into oblivion: the state is not interested in this, and SpaceX itself will never be able to organize a manned flight (and even with a landing!) To the Red Planet.

The clue to the Starship concept can be quite unexpected. Perhaps this is nothing more than a “disguised” military project, no matter how strange and absurd it may sound. And what's the joke, if this was openly announced in SpaceX itself. In October 2019, SpaceX President and Chief Operating Officer Gwynn Shotwell, speaking at the Association of the United States Army conference, proposed Starship as a means of delivering soldiers and ammunition for the US Army. “We are talking with the army about Starlink and Starship,” she said, without going into details. At the same time, Shotwell called the spacecraft a "reliable and inexpensive" delivery method. 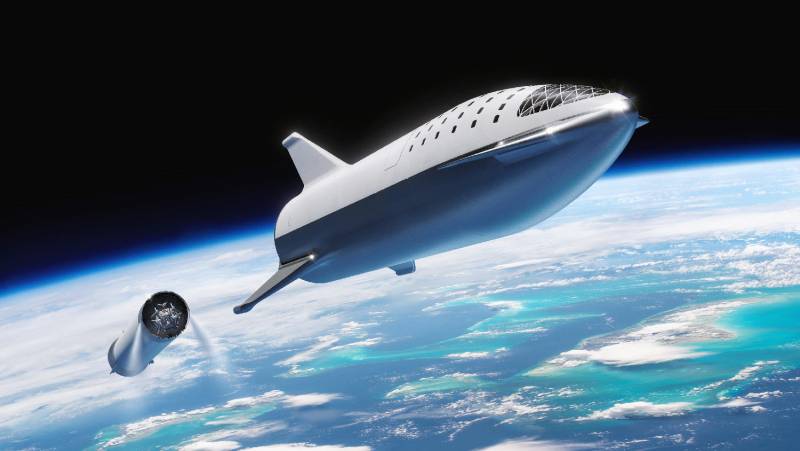 SpaceX, as already mentioned, did not go into details, but earlier, Elon Musk shared interesting information. Recall, back in 2017, the entrepreneur suggested using the BFR complex for earth flights. The maximum flight speed in this case will reach 27 thousand kilometers per hour in the upper atmosphere. Thus, from any point on the Earth to another point it will be possible to fly in less than an hour. For example, a flight from New York to Shanghai will take 39 minutes, and from London to Dubai - 29 minutes. “I forgot to say that the ticket price will be about the same as the fare in the economy class plane,” Musk wrote.

The latter, of course, is simply a colossal exaggeration, strange for a person who is engaged in space-rocket subjects. In fact, this type of transport can be useful only for solving individual problems of very great state (interstate) importance. Could this be the delivery of something in the interests of the US Armed Forces? It cannot be ruled out.

It is appropriate to recall here that the USSR has always perceived the Space Shuttle as a “combat complex” capable of hypothetically delivering nuclear strikes on Soviet territory and stealing satellites. Of course, nothing similar happened in real life, however, the shuttle did not justify itself as a civilian spaceship. Due to the huge cost of launches and the enormous technical complexity of the project. Musk simply cannot not see this example in front of him.

It is worth repeating: there are simply no real civil tasks for Starship. Colonization of other planets in the solar system is something from the next century, when the technology of BFR itself has already become obsolete. And Starship will not be able to replace ordinary passenger aircraft due to the price of launches. 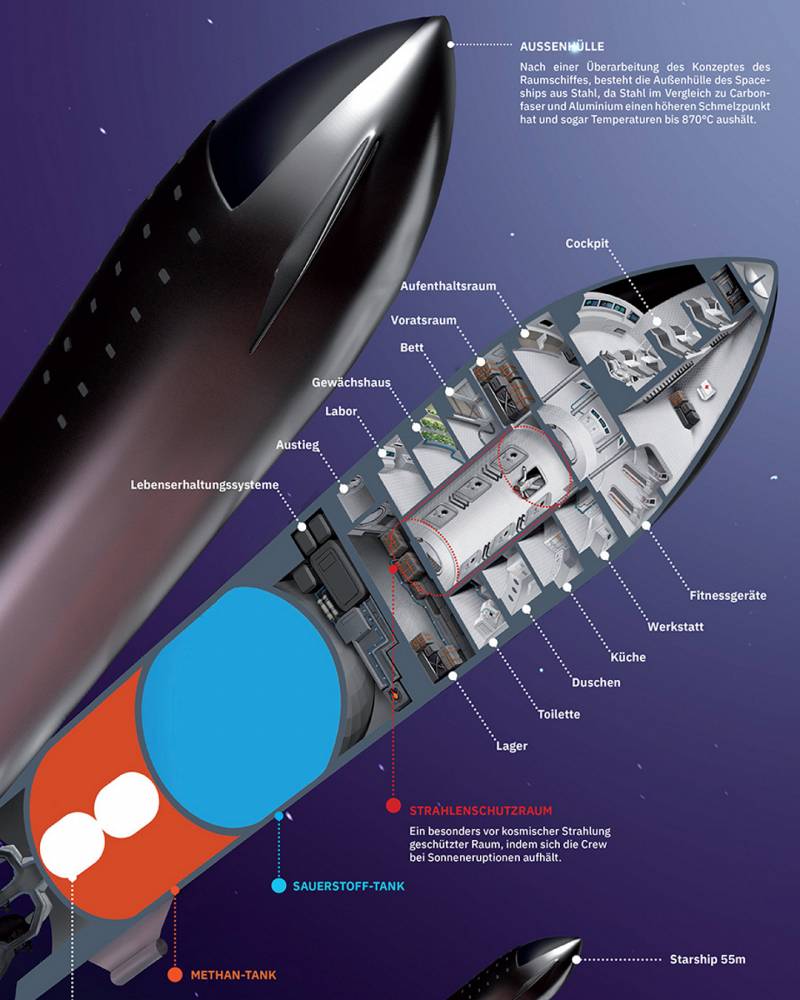 It is noteworthy that relatively recently Western journalists decided to understand the meaning of another megaproject - the world's largest aircraft Stratolaunch Model 351 from Scaled Composites, which should act as a carrier for space rockets launched by the "air launch" method. The plane made its first flight in April 2019, and then the company was sold to an unnamed investor.

Quartz edition of Paul Allen built the world's biggest plane. Does anyone need it? ”Drew attention to some inconsistencies. Air Launch, in which a spacecraft is launched in flight, has long shown its commercial failure. At least with the current level of technology. And then there is Musk with his reusable missiles.

So the journalists suggested that the 351 is nothing more than an emergency means of launching military spacecraft into orbit. The logic is simple: it takes a lot of time and weather to prepare for a rocket launch. There are no such restrictions for launching a carrier aircraft (although, of course, there are also risks).

Those who find all this unnecessary conspiracy theories should remember that not so long ago, the former scientist Robert Ballard, who became famous after the discovery of the Titanic, said that the search for the ship was actually a secret state mission to search for sunken American submarines ...

On the other hand, all this cannot be unequivocally interpreted as evidence of the initial military focus of the Big Falcon Rocket project. Paradoxical as it may sound, but most likely, within its framework, we (or rather SpaceX) will get just a not-so-needed and very expensive spaceship. This, of course, on condition that he will ever take off at all. Musk himself does not lose his optimism.