Remove nuclear weapons from Turkey. In the US, they are working on a plan

October 30 2019
27
According to the New York Times, last week the US Department of State, together with the Department of Energy and the military, began developing a plan to evacuate nuclear warheads from Turkey. 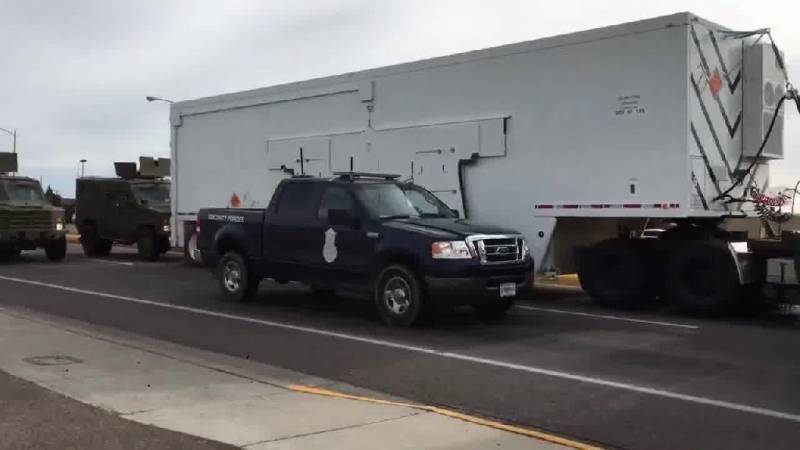 The current situation does not have a simple solution. Nuclear conclusion weapons against the backdrop of growing military-political differences, it will become a demonstrative gesture of loss of confidence in an ally. The consequence of this decision will be the breakdown of all channels of military cooperation between the US and Turkey, which will lead to the closure of the Incirlik air base.

According to the authors of the New York Times, the short-sighted US policy has led to a situation where any of the decisions taken leads to a fiasco. In one case, the loss of a difficult but useful ally. Otherwise - the threat of losing control of the Incirlika nuclear arsenal.

Every unfriendly or provocative gesture from the leadership of a country that agreed to host nuclear weapons is perceived by the Americans as a threat and becomes an occasion to assess the risk of placing nuclear weapons in this territory. Placing such weapons requires 100% satellite loyalty.

"We store nuclear weapons in a country whose army nearly fires cannons at American soldiers,"
writes The New York Times.

50 B-61 thermonuclear bombs were locked up in storage facilities at an air base just 400 km from the Turkish-Syrian border.

Turkey is clearly not a country that would consider a foreign nuclear weapon located on its territory only a source of environmental threat. On the contrary, it shows a certain interest in weapons. Speaking in September, Recep Erdogan declared the unacceptability of a situation in which his country does not have its own nuclear forces. According to Erdogan, "they are possessed by all developed countries of the world."

The statement is a direct violation of the promises made by the Turkish side to the international community. Turkey is one of the 190 states that have joined the Treaty on the Non-Proliferation of Nuclear Weapons. De facto signature means the voluntary refusal of the signatory country to attempt to create nuclear weapons and recognize the exclusive right of the “five great powers” ​​to possess nuclear weapons.

That is why, of all the "developed countries of the world," virtually no one has their own nuclear weapons.

Of course, any statements by Erdogan must be passed through the filter of cheap populism. But, as noted above, in the context of the nuclear weapons problem, such “jokes” are considered unacceptable. From the US point of view, this is a real threat and a reason to evacuate the arsenal.

The tension created around the underground arsenals of the Incirlik airbase takes place against the backdrop of the 60 summer anniversary of the deployment of nuclear weapons in Turkey. But now is not the time for parades. Refusal of further deployment and withdrawal of nuclear weapons can be considered a resolved issue. This was required to be done long ago in view of many circumstances. An evacuation plan has been prepared and will be implemented as soon as possible.

The fate of the Incirlik itself is not clear to the end. In the near future, the base can be transferred to the Turkish Air Force, and the US Air Force units deployed here are transferred to another location. Among the likely applicants is the Greek Souda Bay air base on the island of Crete.

On the other hand, Incirlik knew crises more seriously. In the mid-1970's, the United States already imposed a military embargo on Turkey due to Turkish forces invading northern Cyprus. The issue of Turkey’s exclusion from NATO and the closure of American bases on its territory was seriously raised. But 45 years passed, and everything was in place.

It was founded in 1955 year. In view of the favorable location near the Black Sea borders of the USSR, as well as the immediate proximity to Syria, Iraq and the entire zone of the Arab-Israeli conflict, the Incirlik base has become an ominous symbol of the Cold War. From here the famous U-2 flew out for reconnaissance. From here, G. Powers went on his last reconnaissance flight. The forces of this base provided the entire northern sector of military operations against Iraq.

In recent decades, Incirlik (tour. "Fig Grove") has become a logistics center for the supply of terrorist groups in the Middle East. Any calls by the Turkish public about the need for "transparency" and the establishment of control over the work of Incirlik are traditionally ignored by the American side. It was with Incirlika that she acted aviation rebels during an attempted military coup in Turkey (2016).

The status of the base allows its joint use by the Turkish Air Force and the Air Force of NATO countries. The details of the “cooperation” will be discussed below. It is curious that the air defense of the air base is provided by the Spanish brigade equipped with the Patriot air defense system.

The destructive influence of this place, which became the "center of support for forces trying to split Turkey," was first loudly announced at the beginning of the 1990's. General Ashref Bitlis, who directly accused the United States of supplying weapons to Kurdish forces through the Incirlik, died a short time later in a strange plane crash.

Along with the Aviano air base in the Italian Alps, the Volkel bases in the Netherlands and the Lakenheath in the UK, Incirlik is one of the main locations for the US nuclear arsenal in Europe.

This fortification is designated WS-3 (Weapons Storage and Security System). Technically, it represents a “stone well” leading to a guarded underground facility, which has all the necessary means to monitor the state of the weapon and ensure its safety.

For obvious reasons, the WS-3 scheme and any details regarding the storage scheme, its depth and the security measures taken are not publicly available. There are only images of arched shelters, with clearly visible slots in the concrete flooring. 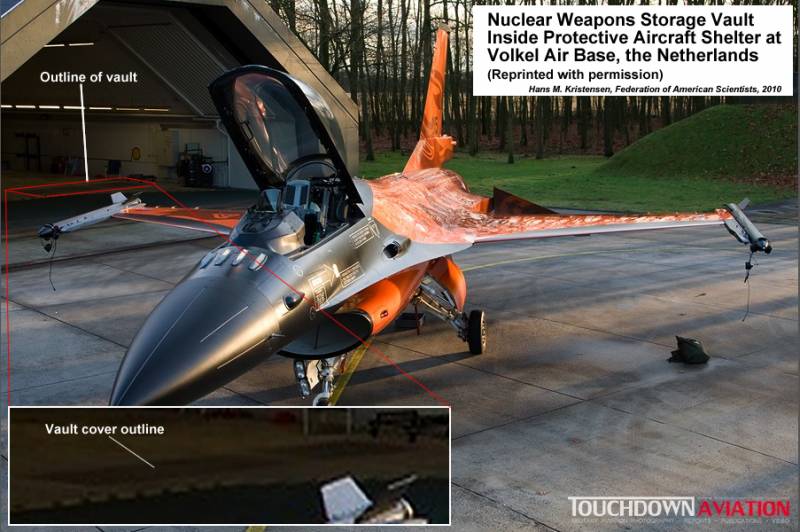 Officially censored snapshots of WS-3's interior have also been published, and you can't really see anything. All that can be said from these photos: the structure is spacious enough to be inside a group of several military men and unhindered access to any part of the weapon. The B61-12 thermonuclear bomb is suspended on a beam holder, and it is in this form that it is delivered by an elevator to the surface.

The meaning of the WS-3 construction is to place nuclear weapons directly in the aircraft parking lot (or rather, under it). Thereby:

a) reduced preparation time for departure:
b) the risks associated with the transportation of special ammunition on the territory of the air base are excluded, especially if the level of military or terrorist threat is increased. At the same time, secrecy of preparation for a combat mission using nuclear weapons is ensured.

Otherwise, any movement of nuclear weapons across the territory of the base is a protocol operation requiring the involvement of fifty personnel units and motorcades from a dozen vehicles.

"Nuclear exercises" at the Turkish air base, 2009

WS-3 shelters are located in the so-called NATO sector “Incirlika” (de facto American), where access to the Turks is prohibited. This zone is located in the very center, directly near the airfield and is fenced off from the "allies" by a double fence (and probably a mined strip with a double-Z mines layout).

It remains only to wish that all this fortification will soon lose all meaning. Nuclear weapons will go far beyond the ocean, home. At the abandoned Incirlik airdrome, wind will blow and residents of local villages will swarm, dismantling electrical panels and beam holders of bombs for scrap. 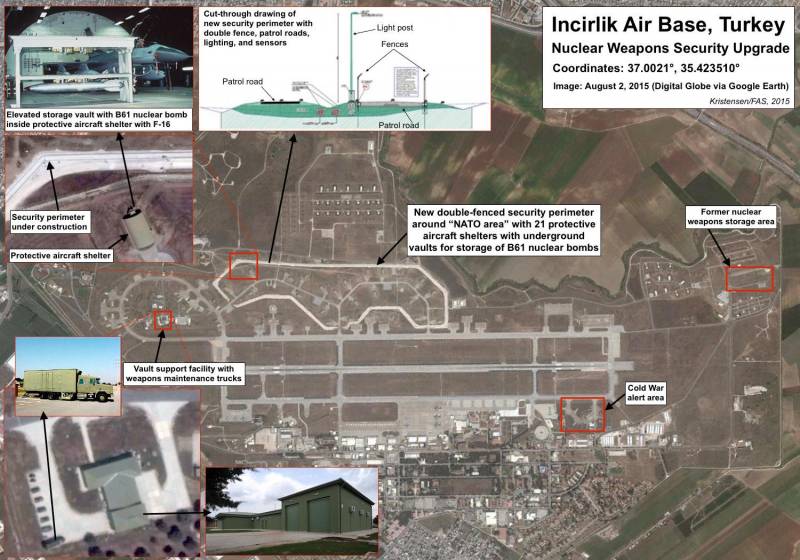 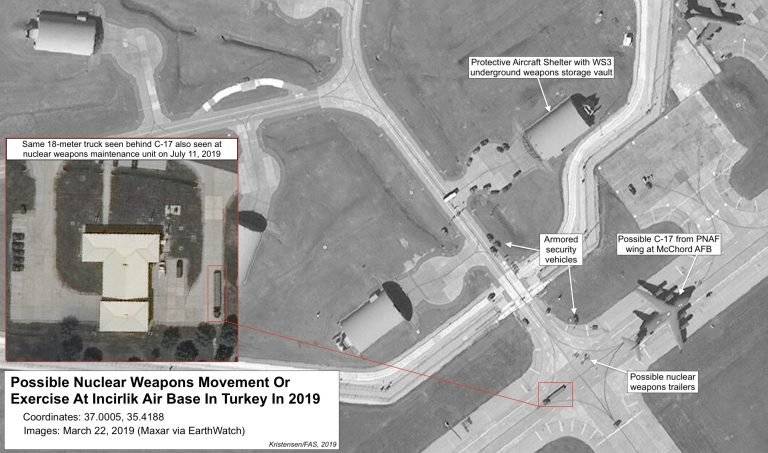 On satellite images dated March 2019, at the Incirlik airbase, exercises are being held on the transportation and loading of nuclear weapons on the transport C-17. On taxiways leading to the WS3 storage, there is a noticeable large number of vehicles and armored cars. An 18-meter "nuclear" trailer, usually parked near the technical service building of the 39-th air wing (responsible for the safety of nuclear weapons at the Incirlik base) on the left side of the map, was seen near a transport aircraft.

Based on materials: fas.org, nytimes.com.