How a secret Nazi weather station was destroyed by a bear

November 1 2019
72
With the outbreak of war, the Germans were faced with the problems of obtaining meteorological data, especially in the Arctic. Share weather data with an adversary that has become an extremely valuable resource, especially during navy и aviation, naturally, no one was going to. Therefore, the Germans are beginning to hastily deploy a network of meteorological stations in the polar regions. So, on the Norwegian Svalbard from submarines and aircraft, periodically detachments of meteorologists who corrected the operation of the fleet and aviation with their data. Also, automatic probes with the same goals were actively dropped from aircraft. 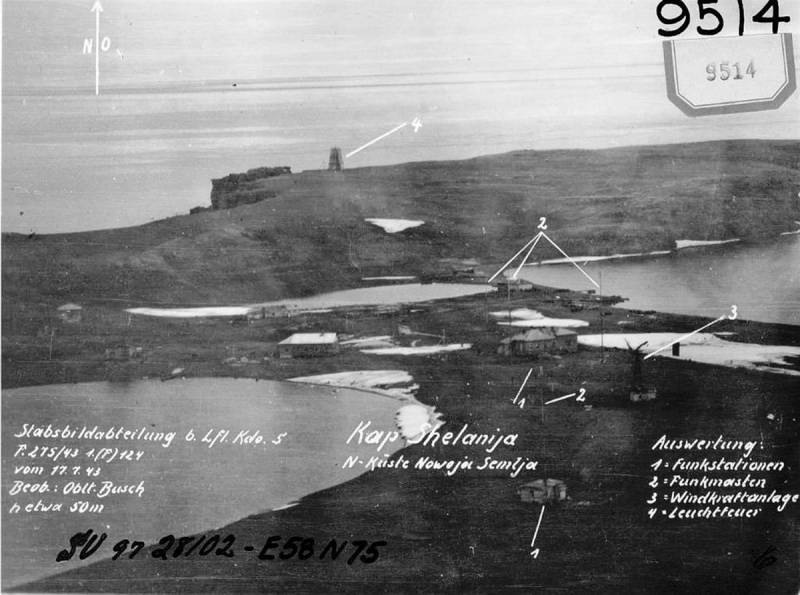 Aerial photo of the Soviet station "Cape of Desire"

The new link in the network of meteorological stations was to be a station on Alexandra Land, one of the islands of the Franz Josef Land archipelago in the Barents Sea. The location of the weather station was associated with the implementation of the operation "Wunderland" ("Wonderland"), which set as its goal the destruction of the northern convoys. Also, the Nazis planned to deploy a small base of submarine sludge and their refueling. For these purposes, it was necessary to build a small fuel and lubricant warehouse. Already in the 2016 year, an expedition of employees of the Russian Arctic National Park discovered a huge number of kerosene tanks at the station site.

Preparations for the deployment of the weather station went thoroughly. Back in the 30's, aerial photography of the region was made. Meteorological scientists, who were supposed to be the crew of the station, trained in the Alps, getting used to the harsh Arctic conditions.

In August 1943, an inconspicuous fishing trawler, gently swaying on the waves, stubbornly walked to Alexandra Land. In appearance, the ship was completely peaceful. Few people knew that the trawler was accompanied by a German submarine, and on board were not ordinary fishermen, but meteorologists and soldiers of Nazi Germany.

Finally, the ship approached the long-awaited goal, going deep into the North Bay. A detachment of ten men landed on the coast, who hastily proceeded to unload. However, there was no particular reason to fear. Alexandra's land was completely uninhabited. Only 150 kilometers from the island did the Soviet weather station Tikhaya Bay operate. Eight meteorologists and two German officers settled on the island, who began construction of the station, which received the name "Schatzgraber" ("Treasure Hunter").

The construction of the station did not take much time. The German detachment was perfectly equipped, and the equipment was the most modern for its time. Food alone was brought in for two years. Of course, the Nazis did not forget about weapons. The station’s combat arsenal included the MG-34 machine gun, Mauser 98 rifles, M-24 hand grenades, and Sprengmine 35 mines. Soon the weather station, prudently surrounded by a network of minefields, began to work. Some time later, the Nazis even arranged a temporary airfield.

Observations were made every hour, and in all from 1943 to 1944, the weather station transmitted about 700 synoptic weather reports. The weather station was officially operated by the German Kriegsmarine Navy. 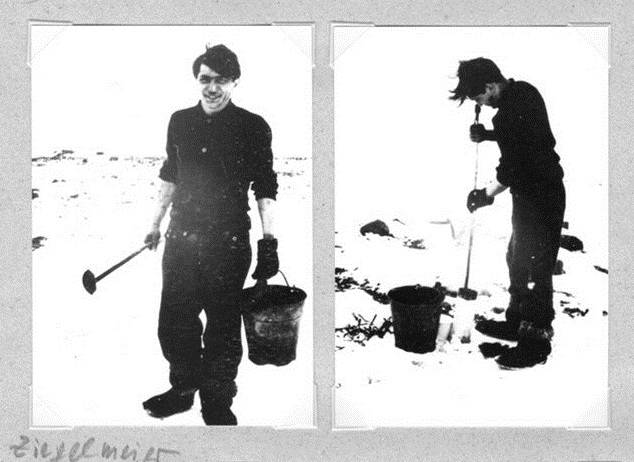 The station itself consisted of about five dugouts and a log bunker, in which seven rooms were located - an equipment room, a bedroom, a dining room, a kitchen, and storage rooms. For a quarter, the log bunker was buried in the ground, and for greater disguise, the upper part of the structure was painted with white paint. In addition to the network of minefields surrounding the station, several firing points were built. At the same time, it was impossible to consider the structure of the station from the sea. 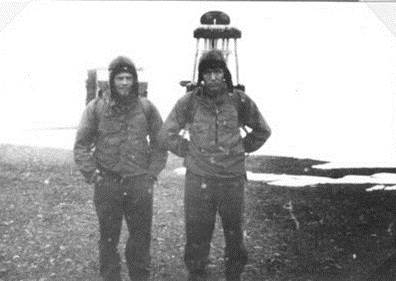 Despite the harsh polar conditions, the life of the Nazis was put at a fairly high level. The German diet included Portuguese sardines, beef and canned vegetables. Meteorologists drank beer, wine, coffee and tea. The only problem was the "canning" nature of the products. The work did not stop the Nazis from seizing the moment for small everyday entertainment. The Germans willingly took pictures, skiing, arranging real ski slopes, and, of course, hunted. The prey was the seal, seal and polar bear. Of course, the Germans did not shun the meat of the beast they shot, because sought to diversify the diet. This ultimately led to the closure of the station. 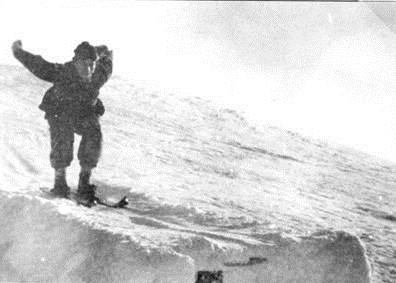 Cooks on the soap

The collapse of the station came suddenly from the side that was not thought of. In June 1944, all the members of the station’s crew came down with signs of an infectious disease. The Germans suffered from severe headache, diarrhea, insomnia, pain in the muscles of the back, abdominals and buttocks. Meteorologists and the military vomited, which eventually led to dehydration. The situation was constantly getting worse.

Finally, the station’s senior officer and its immediate supervisor Marcus sent a message to Berlin about the critical situation of the crew. Germany quickly and soberly assessed the situation. A Focke-Wulf Fw 200 Condor transport plane with a doctor on board immediately flew to the station. 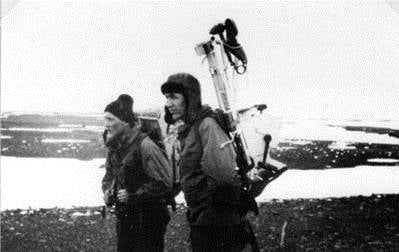 It turned out that the entire staff of the station fell ill with an extremely dangerous and severe form of trichinosis, which would inevitably lead to death without timely treatment. The fact is that at all polar stations, polar bear meat was consumed almost on an ongoing basis. Studies have shown that meat 90% of bears are infected with parasites. In order to protect this meat for eating, it takes a long, up to 3-4 hours, heat treatment. Only after long cooking is the bear meat suitable for eating.

Naturally, German meteorologists knew about this fact, because The “fatal” bear for the station’s crew was far from the first. Thus, most likely, the German hunters simply removed the next prey early from the fire.

Landing the aircraft was extremely unsuccessful. Focke-Wulf stuck in the sand and damaged the chassis. While the doctor examined the station’s crew, the pilots sent a message about the impossibility of raising the car into the air. Soon another plane flew from Svalbard with a load of parts required to repair the chassis, which were thrown off from the air in the vicinity of the Treasure Hunter. 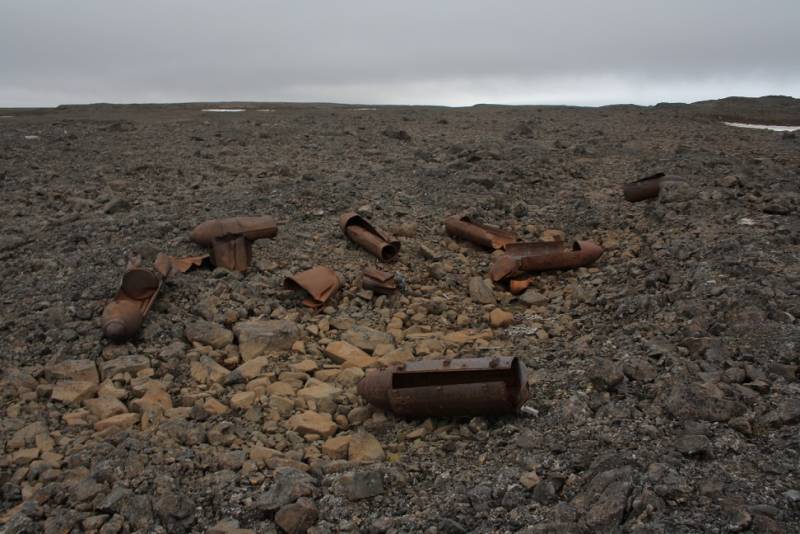 Aviation containers for cargo delivery at the station site

Within half a day, the entire station crew and pilots pulled the plane out of the dirt trap, and then repaired the landing gear. When the work was finished, the Germans left the Land of Alexandra forever. True, there was still an attempt to return. A new batch of meteorologists to the island was supposed to deliver a submarine. However, due to the extremely difficult ice situation, the submarine did not reach its cherished goal.

The secret weather station was discovered quite by accident in the 1947 year. Already in the 50-s of the 20 century, the first attempts were made to explore the object and clear the territory. For some time, Soviet meteorologists even lived at the station. But soon our scientists rebuilt their own station, and the German heritage was demolished. The remaining things the Nazis burned. 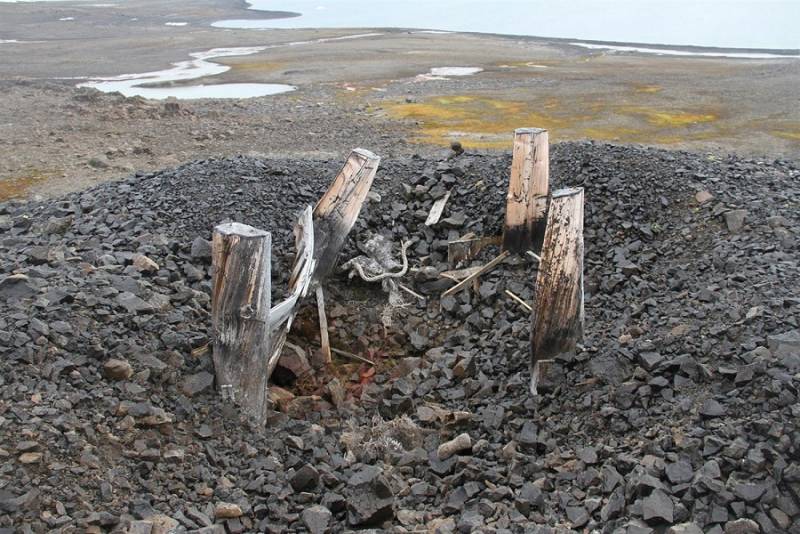 The remains of the buildings of the former German station

Now the territory of the "Kladoiskatel" station is being actively explored by the employees of the "Russian Arctic" national park. Despite the physical liquidation of the station, many historical artifacts of that wartime. Items of uniform, instruments for meteorological observations, books with the seal of the library of the German Navy, music books, magazines, containers for wine and fuel, cartridges and casings, and so on are becoming the prey of researchers.

Ctrl Enter
Noticed a mistake Highlight text and press. Ctrl + Enter
We are
Nazis in the Arctic. Why did Germany need the Far North?Father told
72 comments
Information
Dear reader, to leave comments on the publication, you must to register.