Byzantine army under the emperor Justinian. A few words about the most interesting

October 29 2019
151
Byzantine Empire IV – V centuries It was a centralized military-bureaucratic monarchy, inheriting the main features of the state system of the late Roman Empire, combining the traditions of the Roman state system with elements of eastern despotism. The ruling circles of Constantinople saw in Byzantium the successor to the Roman Empire. 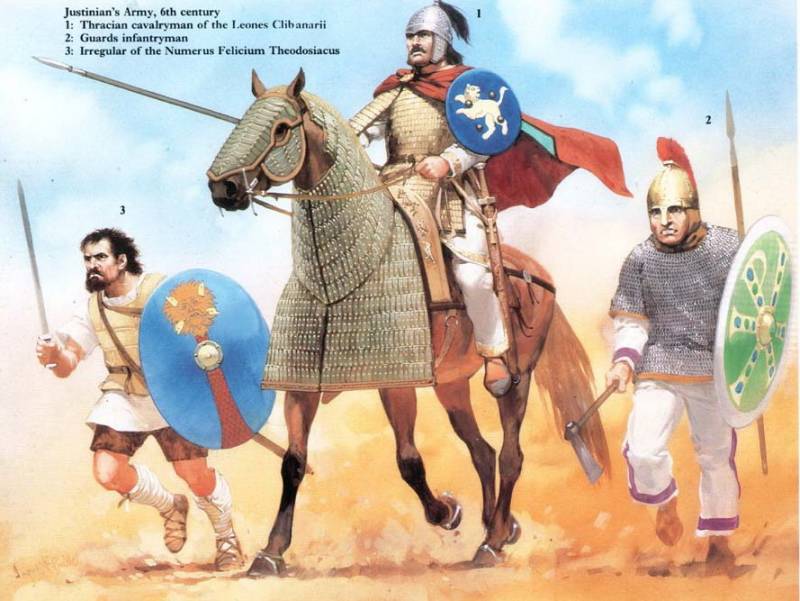 
The economic development of the empire, flourishing at the beginning of the VI century. crafts, trade, cities predetermined the active foreign policy of Byzantium under Justinian I (527 — 565 gg.), Expressed in an attempt to recreate the Roman Empire. 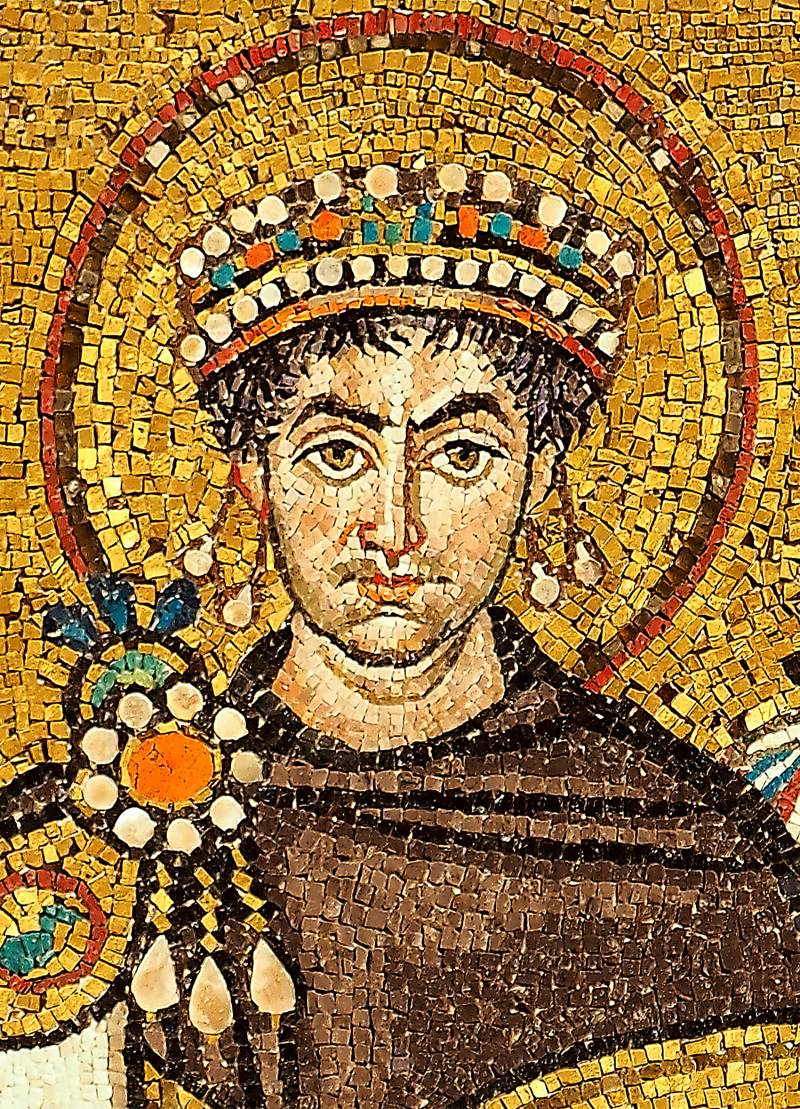 Thanks to the centuries-old experience of military construction, "interaction with neighboring military structures, traditions and the unification and centralization activities of Justinian, the Byzantine army during this period had a clear structure, uniform supply and control, modern weapon. The army of the Eastern Roman Empire is rightfully considered one of the most unique military organizations of the early Middle Ages,

Army and its structure

Thanks to Procopius of Caesarea, we know enough what the Byzantine army was in the times of Justinian I. Procopius was the secretary of Belisarius and spent most of his campaigns with him, being in the retinue of this commander. Command and control of troops proceeded from the principle of strict subordination that was usual for the bureaucratic apparatus of the empire.

At the head of the army was the Master Militum Prezenti (commander in chief, with a residence in Constantinople), sometimes there were two of them: this allowed the emperor to avoid the dominance of the military, thus introducing healthy competition into the ranks of the high command.

Option (the assistant, elected by the stratig himself, was also responsible for the delivery of provisions, the payment of salaries).

Generals are at this time at the same time confectioners - in the sense in which this word is used in a later era. They are surrounded by troops that are recruited by them in their own name and which are called the "Hypaspists." They can not be called bodyguards, as their number reaches several thousand. And at the same time, these troops equally do not serve for security purposes. Rather, their meaning was that mercenaries are easier to manage if the leader is at the same time an entrepreneur organizing military affairs.

The story of Procopius about the mobilization of the troops of Narses (for the fight against Totila) characterizes the method of composing troops in this era, names the nations that included them, the designation of military units not by the numbers of the legions, but by the names of their commanders. The pride and color of the army of Narses is in his bodyguards, who took a special oath of allegiance to the cartridge.

The variegation of contingents did not have a favorable effect on the combat effectiveness of the troops. The second important drawback is often a weak discipline (sometimes imperial mercenaries went over not only to the side of the Germans, but also to the Persian king, however, this is a vice of mercenaries in general). In addition to the shortcomings, the Byzantine forces had a number of advantages, and above all - in organization and hierarchical structure.

Organization of the army (according to the Code of Justinian).

There were also special technical units serving machines, as well as engineering teams. Moreover, some, figuratively speaking, "types" and "types" of troops in the Byzantine army were already unified: they had uniform weapons, clothes, etc. For example, slingers, soldiers serving siege machines, etc. already had embroideries with a uniform image, essentially an emblem of the form of troops. 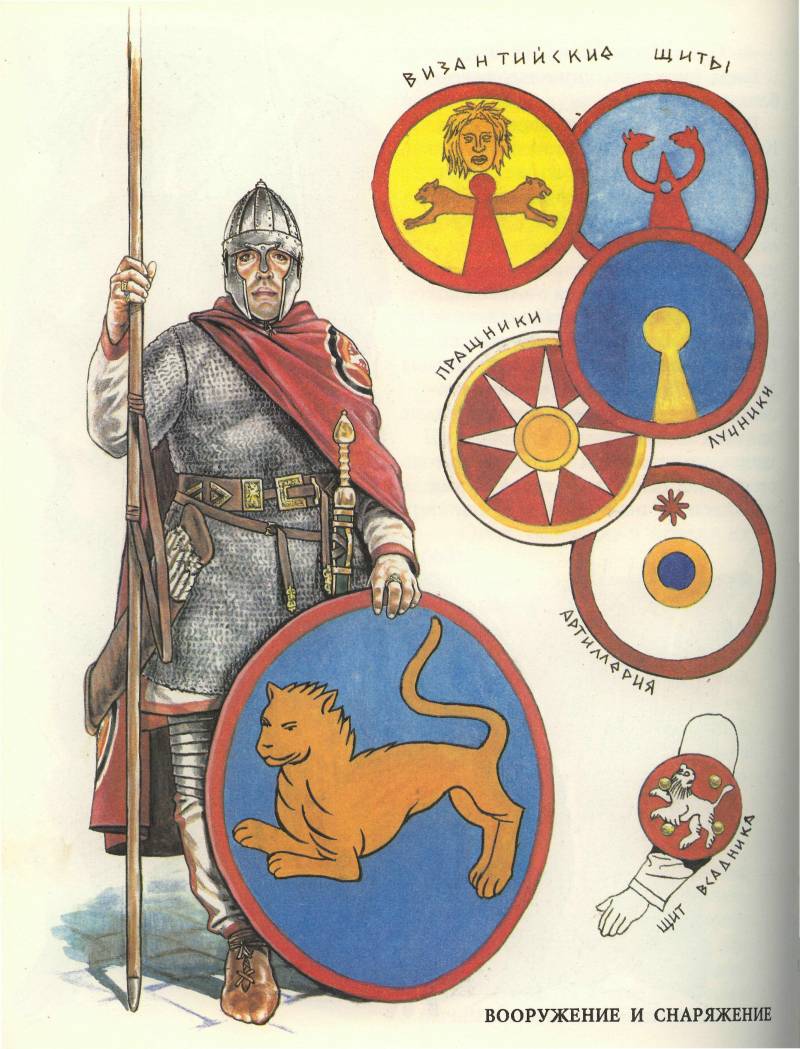 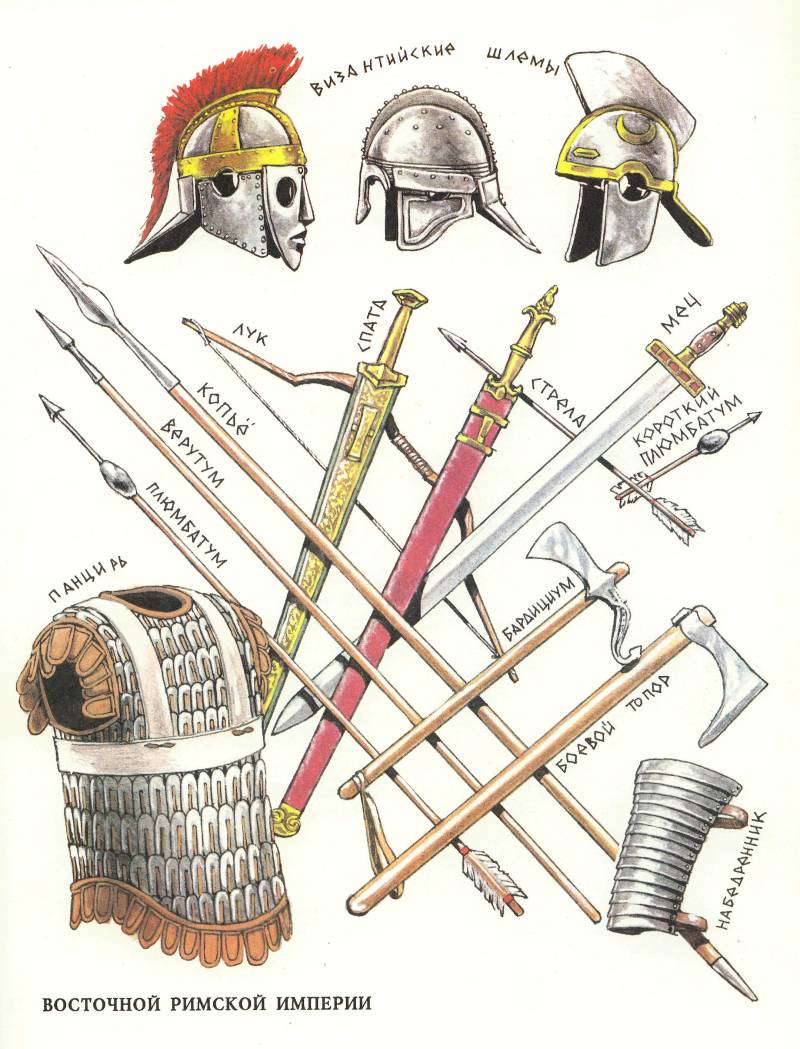 As in the armies of classical antiquity, under Justinian we find a fundamental and rare division according to the type of weapon: heavily armed infantry (the core of the army) and lightly armed infantry (archers or javelin throwers), cavalry (blade weapons, spearmen, equestrian archers). But plus to this, battle axes and other national weapons appear.

But ... gradually, under the influence of military operations with its eastern neighbors (Sassanid Iran was for a long time the main direction), the priority in the structure of the army eventually passes from infantry (the skeleton in the old Roman army) to cavalry, which has become the best and most part of the Byzantine Empire's army. The concept of "legion" does not acquire tactical, but only organizational significance.

The main weapon of both infantry and cavalry is a bow with arrows. Throwing guns, field fortifications were widely used. Lightly armed and heavily armed infantry merge with each other, even infantry and cavalry can no longer be sharply separated from one another: infantrymen mount horses, and cavalry fight on foot (as needed). 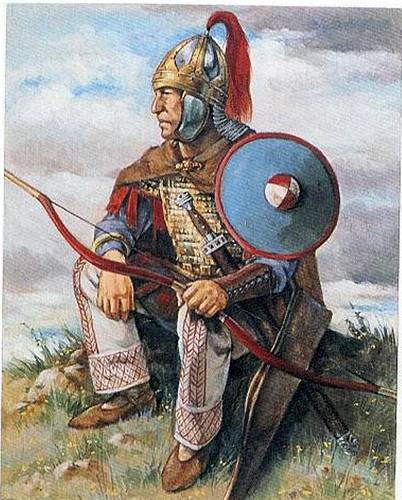 The agricultural part of the people, who paid taxes, is now separated from their own army. The feds, who were a significant part of the troops, also had their own characteristics.

Particular attention was paid to the training of troops, the improvement of battle formations, and the manning of the armed forces.

As for the local militia in cities and villages (it had a subordinate position, gathered only in some cases, when the invasions of the Slavs and Bulgarians were reflected), tribal contingents, they had very low combat efficiency.

Some of the reasons for the success of Justinian troops

What is the reason for the brilliant successes of Belisarius and Napceca in the restoration of the Great Empire? Not only military, but also political reasons can be traced here. 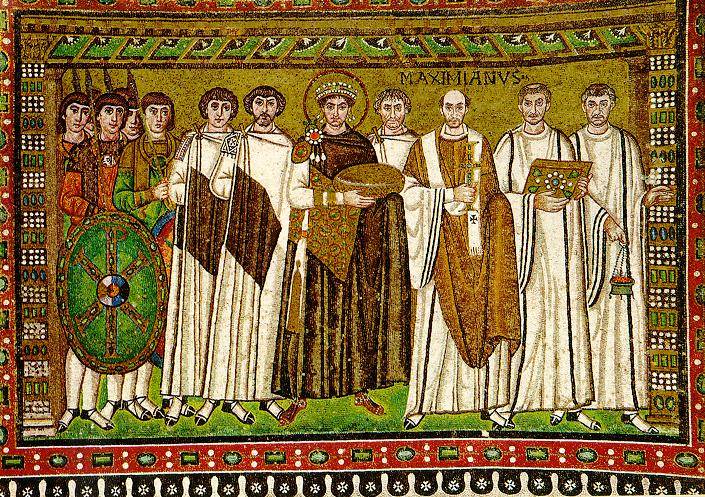 1. Weaker opponents (with the exception of Iran, a worthy enemy of Byzantium) - the Ostrogothic kingdom, the Vandal state, are built on the basis of the patriarchal system. As for the Bulgarians, Slavs and other tribes who raided, they passed through the lands of the empire as a sieve, without violating the foundations of the state system, although bringing death and destruction. The opponents of Byzantium did not have such potential in strength and human resources.

2. A more progressive Byzantine army, to some extent not forgetting the Roman traditions of military art. Without even taking into account tactics, organization, etc., we consider only weapons. The modern edged weapons of the Byzantines, excellent throwing machines (which Procopius describes so vividly) underline the weaknesses of opponents in this regard. The Slavs fought on foot, almost naked, without armor, with only shields, often there are no bows or darts, Franks, who fought on the side of the Goths, had only spears in horseback, carrying infantry only a sword, a shield, an ax. In addition, Greek fire was invented in Byzantium, although it was practically not used in this era.

3. An excellent understanding of the theoretical foundations of military affairs by the Byzantines (the work of Justinian, Mauritius). Higher degree of military art. But in general, progress in organizing, arming, equipping, supplying troops, understanding and using the combat experience of not only one's own, but also of neighboring peoples.

4. The presence of remarkable commanders Belisarius and Narses at the head of the East Roman armies, not only using and generalizing all of the above, but also inscribing their bright page in history and the theory of military art in general. They worthily accomplished the daunting task set before them. Byzantium created its own, original and original school of military thought. Narses and Belisarius fought not by numbers, but by skill (15 — 30-thousandth units against the masses of “barbarians”). Moreover, the Ostrogoths in the future tried to maintain the correct battle order, imitating the Byzantines, the Slavs and others did not even do this.

5. The economic power of the empire, just in the VI century. booming wealth and resources.

The general rise of the empire, the foreign policy situation and a powerful army - all these factors, coupled with other reasons, gave such a significant foreign policy to the empire of this era. 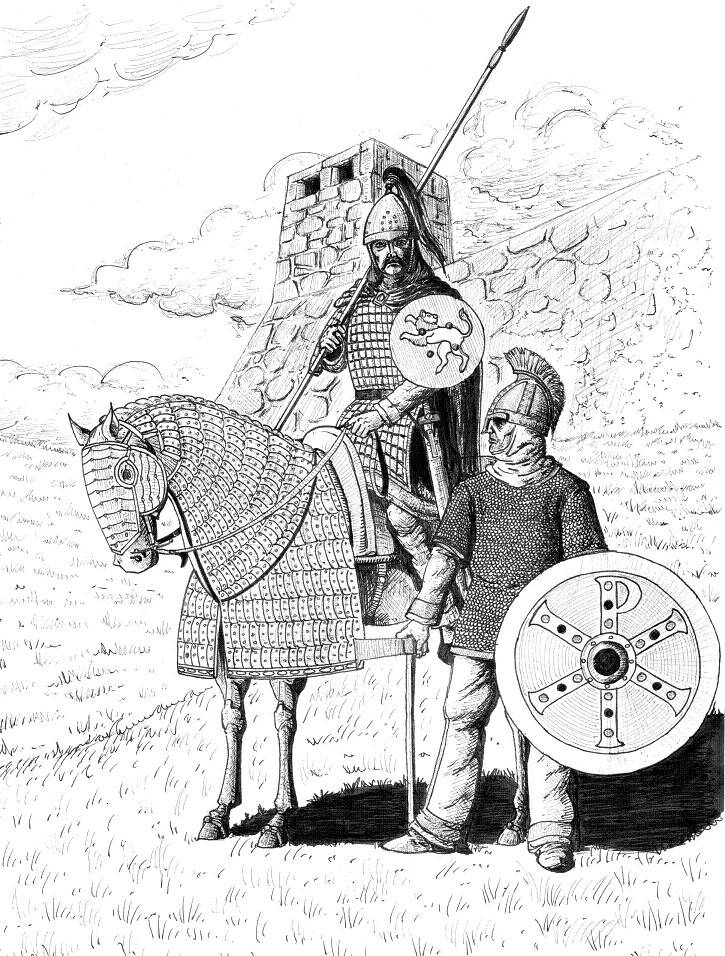 We made an attempt in the most general terms to consider both the state of the army of the Byzantine Empire under Justinian I, and to trace the relationship of the military factor with the foreign policy successes of Byzantium of the VI century, highlighting the reasons for such brilliant successes of the conquest policy of the empire of this period.

We are in Yandex Zen
Army of Byzantium VI. Battle commander Belisarius (continued)
Byzantine lessons. To the 560 anniversary of the fall of Constantinople. Part of 2
Military Reviewin Yandex News
Read Military Reviewin Google News
151 comment
Information
Dear reader, to leave comments on the publication, you must to register.