October 28 2019
208
On October 23-24 in Sochi, a two-day summit and the Russia-Africa economic forum were held. The event was co-chaired by Russia and Egypt. The forum was attended by delegates from 104 countries, including the heads of 44 African countries. 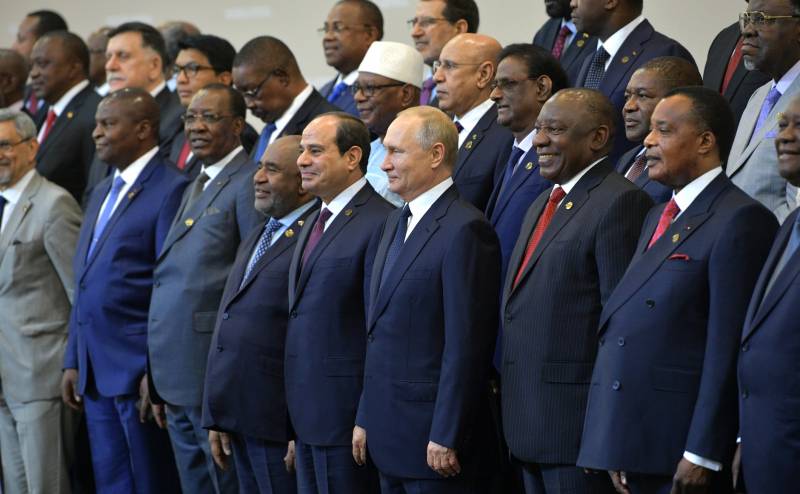 The forum was widely broadcast by Russian television. Representatives of the liberal public reacted especially vigorously to him. Most often, they suffered from the fact that Russia is drowning in poverty, and the authorities are looking for happiness in Africa for commercial companies close to them. In this regard, a statement was discussed at the forum of the President of Russia Vladimir Putin on writing off debts of 20 billions of US dollars to African countries.

It is amazing that “informed experts” spoke so actively today about the day before yesterday. news. Indeed, at a forum in Sochi, Vladimir Putin only repeated what he announced two years ago, in September 2017, after negotiations with Guinean President Alpha Conde.

Then Putin said that as part of a global initiative to help the poorest heavily indebted countries, Russia has written off debts to the states of the African continent totaling about $ 20 billion. The write-off affected a large group of countries - Zambia, Mozambique, Guinea-Bissau, Tanzania, Equatorial Guinea, Sao Tome and Principe, Madagascar and others. Each of them accounted for not so much, if you look at the background of other similar actions, when, for example, Cuba forgave $ 35,3 billion in debt, Iraq - in 12,9, North Korea and Mongolia for $ 11bn., Vietnam - $ 9,5 billion, etc.

So Russia wrote off loans granted to developing countries by the Soviet Union. At the beginning of the 90s, there were about $ 150 billion of them (according to Alexander Shokhin, who was then deputy prime minister). There are several motivations for writing off debts. Firstly, loans for which already outdated military equipment was delivered (for example, Tanks T-34, T-54-55), unclaimed in the Soviet Armed Forces. Secondly, the so-called “dead debts” were written off, that is, those for which there were no real prospects for repayment.

Finally, the cancellation of Soviet debts in some countries opened up new opportunities for Russia to further trade cooperation. So it was with Algeria, which in the 2006 year was completely written off the Soviet debt of $ 5,7 billion and immediately signed a contract for 7,5 billion dollars to buy Russian military equipment. Similar история occurred with other solvent countries in Africa.

There was another reason for Russia's participation in world initiatives to write off debts to the poorest countries of the planet - membership in the famous Paris Club of creditor countries (the highest class of economic powers of the world, consisting of 21 states). The status of the club implies unconditional participation in periodic actions to restructure the debt of developing countries. Russia must also comply with this high status. 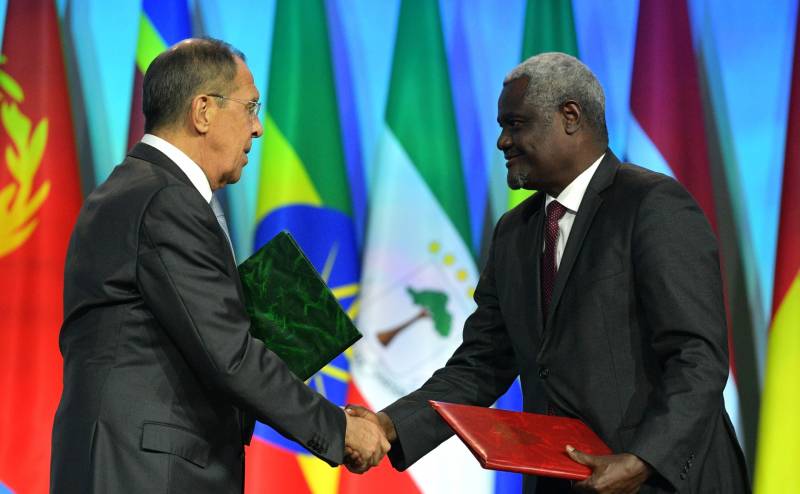 What did liberal political scientists not see?

Even liberal Russian political scientists know about this feature of writing off “dead debts”. True, they interpret it in a very different way. Here is an assistant professor of the Department of Oriental Studies and African Studies at the Higher School of Economics in St. Petersburg, Leonid Isaev, in an interview with German DW, assessed the results of the Russia-Africa forum ended as follows:
“This is a geopolitical PR campaign ... another signal for the Russian population: we continue to return, we continue to return our lost ground. All this fits into the logic that began during President Putin’s third term. ”

Associate Professor Isaev does not believe that Russia can return to Africa.

“We have a trade turnover with all of Africa a little more than 20 billion dollars, of which much more than half falls on Egypt and other countries in North Africa ... The audience expects us to propose some kind of our long-term strategy in Africa. But so far no one has formulated this strategy in our country and no long-term vision exists regarding Africa. ”

Formally, the assistant professor Isaev is right. There is no nature document about such a strategy developed by the government and approved by the State Duma. However, one cannot fail to see the work that the Russian Ministry of Foreign Affairs conducted in the African direction over the past two years.

Already at the beginning of 2017, when US Secretary of State Kerry, a note-taking interlocutor of Minister Lavrov, resigned on the Smolenskaya Square in Moscow, the heads of African foreign affairs agencies frequented. The protocol press conferences following the talks reflected the clear interest of the guests from Africa in cooperation with Moscow.

There are two reasons for this. By that time, Russia in Syria had shown that it was capable of almost single-handedly resolving regional conflicts (Africa is very rich in them), while at the same time behaving correctly and respectfully towards local leaders. The second reason was the decline in interest of the American administration in the problems of the African continent.

In August last year, the New York Times noted that the US was beginning to withdraw troops and reduce operations in Africa. And this September, in his address to the UN General Assembly, US President Donald Trump did not mention Africa at all, as if Washington were not interested in its problems. 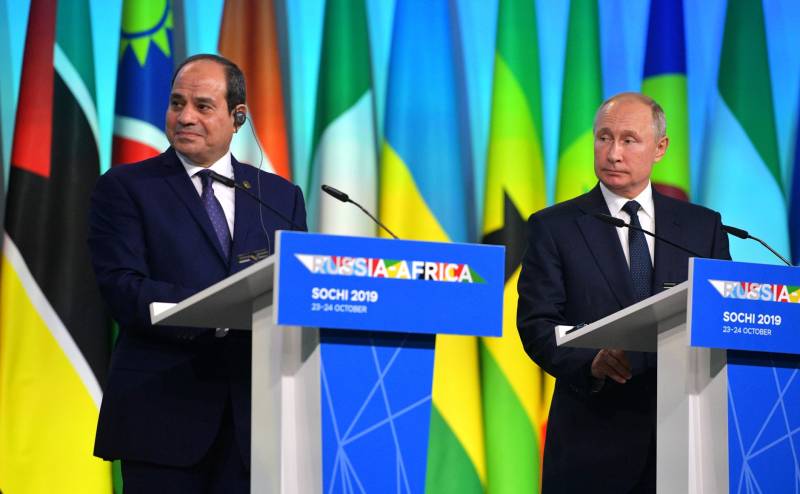 The base for this is already there. Incidentally, in many respects it was created in Soviet times, which is now so abused for African debts. And there was not only the economy. In Africa, they did not forget how, in 1960, despite the stiff resistance of “Western democracies”, the Soviet Union achieved the adoption of the UN Declaration on the Granting of Independence to Colonial Countries and Peoples. With its help, African countries have gained the long-awaited freedom.

Naturally, it was with the Soviet Union that free Africa began to develop political, economic and cultural cooperation. About half a million Africans have received education and training in USSR universities. On the blackest continent, the Soviet Union created 10 higher education institutions and 80 secondary and vocational schools.

No less important was Soviet economic assistance. The USSR built 300 industrial enterprises in Africa, 155 agricultural enterprises, and actively exported its products to the continent. Note that in the export structure, almost a third was accounted for by machinery and equipment, almost a fifth of Soviet deliveries were industrial goods. Ready-made foods, pulp and paper products, etc., went to Africa. In short, high-value-added products, which Russia is now striving for.

Today Africa (especially the sub-Saharan Africa) is developing rapidly. Eight countries here have GDP growth comparable to Chinese, and in Guinea and Rwanda the economy grew by 8,7% last year. Such growth requires resources. They come, including from Russia. Over the past five years, our trade with the continent has doubled and, as already noted, has exceeded the mark of $ 20 billion.

Moreover, in the structure of Russian exports to Africa, 91% are non-commodity goods. The African Institute of the RAS made calculations for the development of economic cooperation after the forum in Sochi. In the next five to seven years, trade with Africa is expected to grow by another $ 17-18 billion.

Unlike Associate Professor Isaev, the British "The Times" believes that Russia has already returned to Africa and confirms its conclusion with quite obvious figures. “Last year,” the newspaper writes, “Moscow entered into military agreements with at least 20 countries south of the Sahara. Rosoboronexport currently accounts for 35% of shipments weapons in Africa".

We add that eight African countries have signed an atomic cooperation agreement with Russia (they expect to build nuclear power plants in the future). The Russians are helping the authorities in the diamond-rich Central African Republic overcome the civil conflict, supporting the legitimate government of Mozambique in the fight against jihadists in the northern province of Cabo Delgado. The plans of military-technical cooperation with Russia were announced by the authorities of Nigeria.

In this series, the message of the Defense Web news portal of the South African military department that the last week of November in the waters of South Africa will be held joint naval exercises of three countries - Russia, China and South Africa.

In a word, Russia in Africa is establishing long-term, multilateral cooperation. It should bring the country benefits not only economic, but also political. The forum in Sochi showed that the countries of the continent are ready for such a development of events.