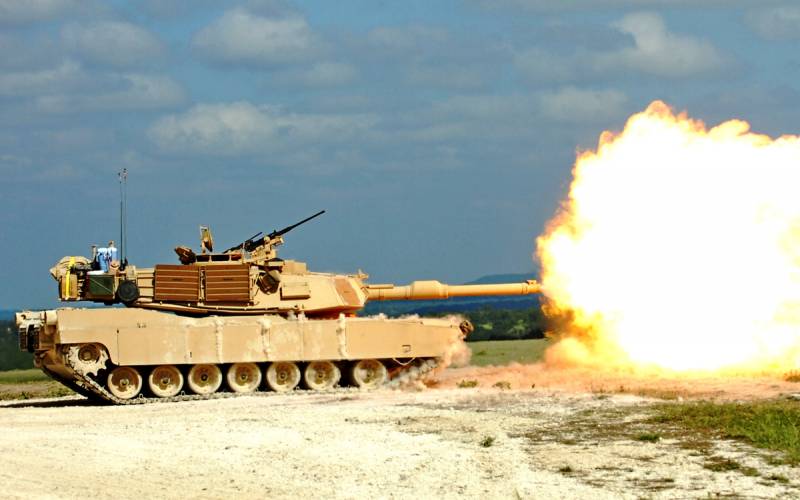 According to current Pentagon plans, the main combat Tanks M1A2 Abrams will remain in service for the next several decades. They are planned to be regularly repaired and modernized. At the same time, the military is not going to abandon the existing 120-mm gun M256A1. To increase the combat qualities, it is planned to continue to improve the LMS and create new ammunition.

New shells for the old cannon

Over the past few decades, the Pentagon and the American industry have been exploring the possibility of a radical upgrade of the MBN M1A2 MBT weapons, but in the end everything remained the same. Tanks, as before, carry 120-mm M256A1 guns with a barrel length of 44 caliber. Their replacement is not planned in the future - with all the updates and improvements, the Abrams will retain their regular weapons.

It is proposed to increase combat characteristics by improving other components of the weapons complex. Ammunition plays an important role in this process. With a view to the future, new unitary 120-mm shots with promising shells are being created. Some of them have already been put in series.

In early May 2019, it became known about the Pentagon’s plans to purchase shots with an armor-piercing firing projectile-caliber projectile (BOPS) type M829A4 AKE (Advanced Kinetic Energy). This product is part of the well-known M829 family and has some features that enhance the basic characteristics.

The M829A4 shell has been developed since 2011 with the participation of several organizations. Design work took several years, and in the 2014, the projectile was put to the test. They were followed by the first contract for the production of another prototype batch of ammunition. To date, all work has been completed, and the US Army has placed an order for the full-fledged release of shells. Serial production is carried out at one of the sites of Northrop Grumman Innovation Systems (formerly Orbital ATK). 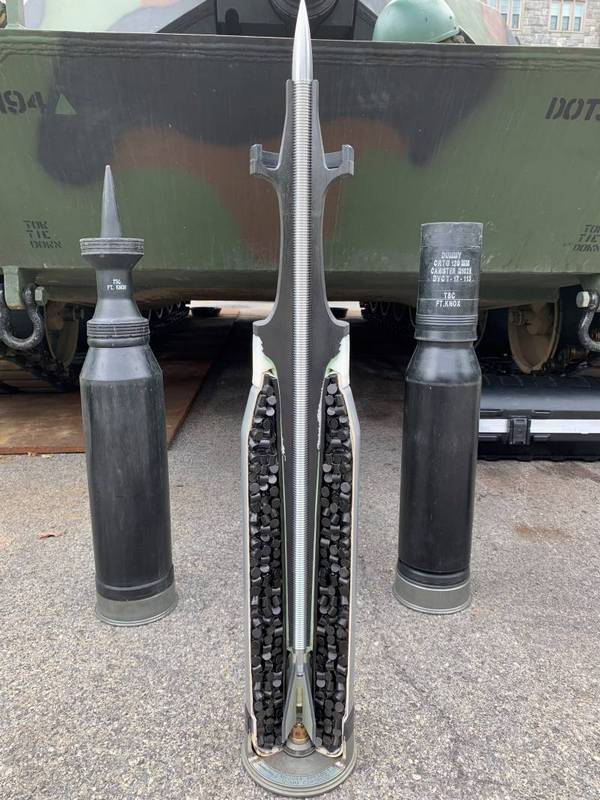 Shells of several types. In the foreground is a split layout of the latest M829A4. Sturgeon's House Photos
The M829A4 product is based on the solutions of previous projects, but has significant differences. The core is made of depleted uranium and has an improved design, due to which the energy of the propelling charge is used more efficiently. The exact penetration indicators are not called, but it is claimed that the projectile can hit any modern or promising tank.

The project also included the improvement of other components of the shot. Recycled partially burning sleeve and improved propellant charge. The detachable master device consists of three polymer elements of improved design.

The M829A4 BOPS is fully compatible with the M829A4 guns, however, it requires updating the LMS software due to different ballistics. Some innovations increase the safety of the projectile at all stages, up to loading the gun.

Serial production of M829A4 shells will increase the fighting qualities of tanks, as well as gradually upgrade the arsenals of tank units. The release of such ammunition will continue over the next few years. As armored vehicles continue to operate, old M829 shells will be used up, and the modern A4 will become the main one in its class.

The development of the AMP (Advanced Multi-Purpose) project continues, the result of which should be a new multi-purpose projectile. Now the ammunition MBT M1A2 includes several different shots with cumulative, cumulative-fragmentation, high-explosive, and other shells. Unified practical shots are also used. According to the results of the AMP program, three different shells will be replaced with just one. 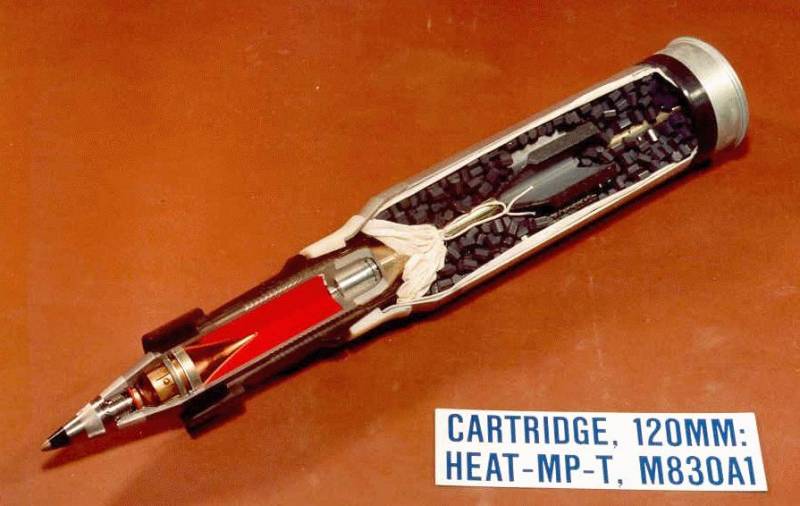 Product M830A1. Photo Fas.org
The XM1147 AMP product has been developed by Northrop Grumman / Orbital ATK since 2013. Various tests were previously reported, but adopting the projectile for armament is still a thing of the distant future. Serial production and operation are expected no earlier than the beginning of the twenties. The introduction of AMP shells is associated with the next modernization of tanks, necessary for the installation of some equipment.

According to well-known data, the AMP shell must have a special design that ensures the formation of a cumulative jet, shock wave and fragments. He also needs to get a programmable fuse. The carrier tank, respectively, needs a programmer and some improvements to the LMS.

Depending on the mode of operation of the fuse, AMP will be able to perform the functions of a cumulative, high-explosive or fragmentation projectile. After being put into service, it will immediately replace the three current ammunition, which will simplify the compilation of the ammunition of tanks without any loss in combat effectiveness.

Continuation and resumption of production

Interesting not so long ago news in the context of the AMP program. It was previously assumed that in the future, the AMP will replace four current ammunition. One of them was to be a high-explosive M908, designed to destroy buildings and destroy obstacles. In the future, such tasks were proposed to be solved using one of the XM1147 modes. 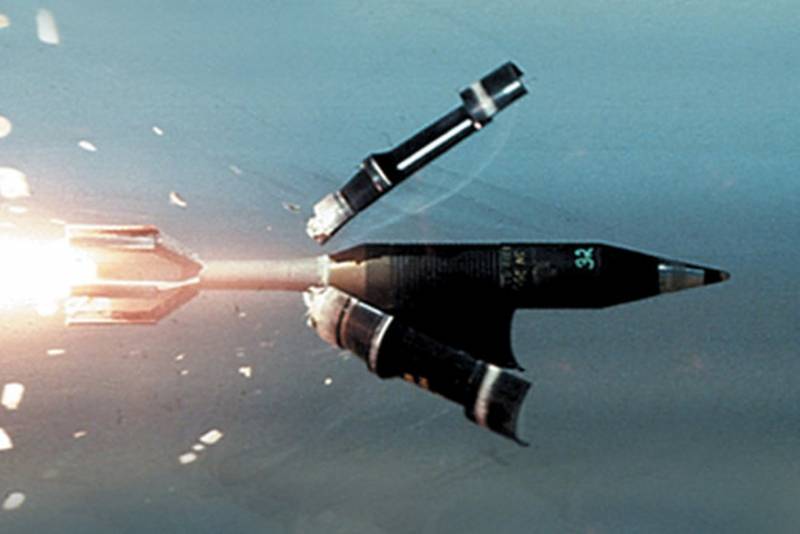 M1147 AMP shell at the time of separation of the master. Photo Shephardmedia.com
In the recent past, the M908 projectile shot was discontinued from mass production. However, production lines are now being restored. The Pentagon decided that the new AMP product could not be a full replacement for the M908. While M1A2 Abrams tanks from combat units can use the available stock in the arsenals, but soon they will receive ammunition of the new release. Whether the M908 will receive a replacement in the foreseeable future is unclear. XM1147 AMP was the only contender for this niche.

The Pentagon continues to order other ammunition of the old types. So, in October last year, General Dynamics received another order for the production of M1002 training shells. Such a shot is intended to train tankers in the use of munitions of the M830A1 type. Shells of two types have the same ballistics, but M1002 differs in shape and content. In addition, it has a tracer to facilitate tracking of the results of shooting.

In the future, the M830A1 shell will have to give way to the promising XM1147, but over the next few years it will retain its position. Together with him, the practical M1002 will remain in service, which is not yet going to be abandoned. Moreover, it can undergo modernization, after which it will be used when training in firing new shells.

The American command has specific plans to modernize MBT, including affecting ammunition for tank guns. The development and development of new shots with the temporary preservation of some existing ones is proposed and carried out. These plans have two main trends. 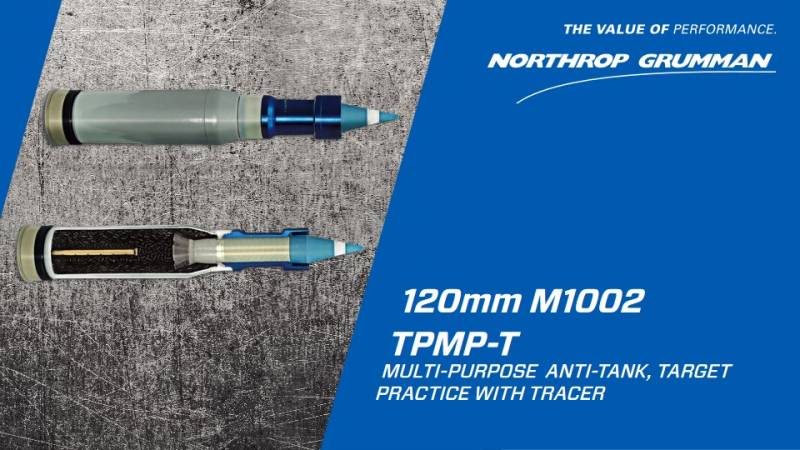 Northrop Grumman M1002 Projectile Advertising
The first concerns the technical characteristics of new products. Promising samples in key parameters should exceed existing ones. The second idea is to reduce the number of shots used without narrowing the range of tasks. After the successful implementation of AKE and AMP projects, only two shells will become the basis for the M1A2 tank ammunition. Now for the same purposes, five types of products are used. The benefits of such a replacement are obvious.

However, not all current plans can be implemented in minimal time and at minimal cost. For example, an XM1147 shell equipped with a programmable fuse will have to be used with a gun that has an appropriate programmer. Such a device will be introduced only in the next Abrams MBT modernization project no earlier than the beginning of the twenties.

Thus, the development of MBT M1A2 Abrams continues and affects all the main elements of the armored car, including her weapons and ammunition. It is expected that all these measures will allow tanks to maintain high tactical and technical characteristics for a long time and meet current requirements in the future.