October 28 2019
14
Paraguay is a South American state that does not have direct access to the ocean. However, the rivers of Paraguay (the right tributary of Parana) and Parana flowing through the territory of the country flow into the Atlantic Ocean. Thus, a little indirectly, the country still has access to the ocean, but the fleet, naturally, is near the Paraguay river. At the moment, the total number of "sailors" of the National Military fleet Paraguay (Armada Nacional de Paraguay) a little less than four thousand troops. Of course, the backbone of the Paraguayan Navy is patrol and landing boats of various types. And the flagship of the fleet is perhaps the oldest operating cannon on the planet "Paraguay." 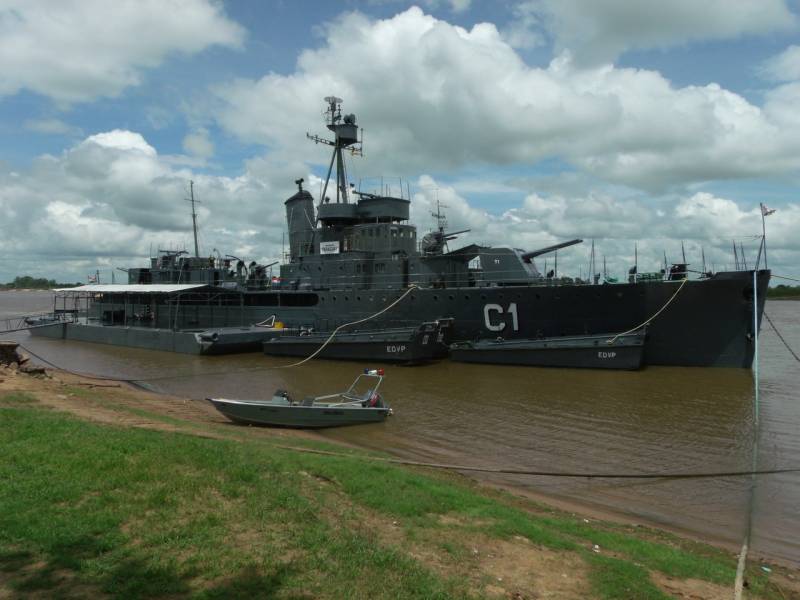 Paraguay (Paraguay, flight number C1), as well as its sistership Umaita (Humaita, flight number C2), owe their birth to the growing threat of the Paraguayan-Bolivian war. In the 1926 year, the Paraguayan General Staff directly appealed to the government with a request to urgently purchase two gunboats to control the country's river arteries. At the same time, the development of the design was entrusted to the famous military engineer and naval officer Jose Bozzano in Paraguay. However, the initial design of Bozzano ships began to be developed as part of a dissertation at the University of Massachusetts at the United States of America. In the 1927 year, with all the technical documentation, Jose went to Europe to find a shipyard suitable for construction. 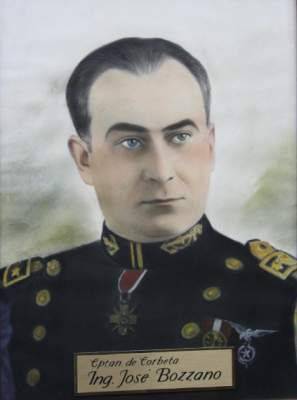 Bozzano visited both England and Germany. But the final choice fell on the Italian shipyard in Genoa - Cantieri navali Odero. By that time, the shipyard had already built several fairly modern destroyers of the Turbine type. Finally, a contract was signed for the construction of two gunboats. Construction was carried out from the 1928 to the 1931 year.

On 19 on April 1931, the two flagships of the Paraguayan fleet left Genoa and headed for Buenos Aires. On board was a small team of Paraguayan officers led by designer Bozzano. But the bulk of the crew was formed from Italians. Upon arrival in Buenos Aires, the Italians were completely replaced by the Paraguayan crew. In the capital of Paraguay Asuncion, the cannonboats “Paraguay” and “Umaita” came along the inland waterways. The people met the ships in a festive atmosphere, and at the same time, Bolivia sent desperate protests, learning about the increased artillery power of a potential enemy on the rivers. 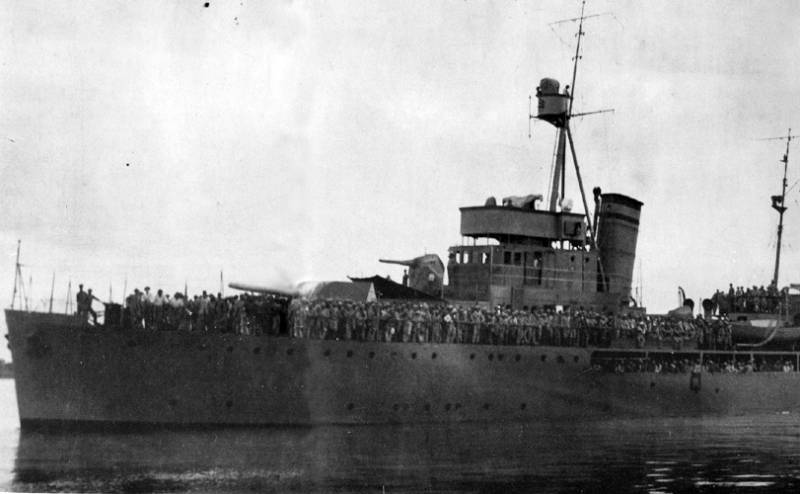 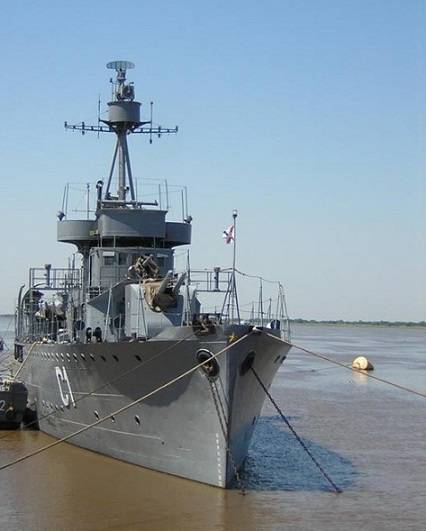 As for weapons, it is not for nothing that Bolivia bristled with protests. The artillery power of the ships fully corresponded (and sometimes exceeded) the power of destroyers of that time. The main caliber was four 119-mm guns. The ship also carried on board three 76-mm guns, two 40-mm guns and two 20-mm automatic guns, not counting six minutes. The crew consisted of 86 sailors and officers.

Gunboats in the Chuck War

At the same time, tensions were building up on the Bolivian-Paraguayan border, weighed down by the arrival of oil corporations, who said there could be oil in the Gran Chaco region (a sparsely populated and semi-desert region in northern Paraguay) that could be seen. The active arming of both armies began. Finally, Bolivia made the first move. On 15 on June 1932, the Bolivian forces attacked a garrison of Paraguayan forces in the town of Pitiantut. Already in August 1932 th began heavy fighting in Gran Chaco.

"Paraguay" with the landing troops. Navy Museum in Asuncion

Towards the end of the first month of the war, the Paraguay and Umaita gunboats entered the fighting. The first task of Paraguay was the quick delivery of reservists to the front along the waterways, as well as providing air defense, as actively involved in the fighting a few Aviation. In total, during the war, Paraguay transported 52 thousand soldiers to the front lines in the 81st military campaign. The main thing is that the very presence of such powerful gunboats on the Paraguay River put an end to the use of rivers by Bolivian troops. Of course, there were attempts to deploy their Navy on the rivers, but they failed. The war dragged on, Bolivia lost all aviation, artillery was exhausted, and the loss of the dwarf fleet to the Bolivians also seemed like a complete disaster.

The war, which began with the victories of Bolivia, ended, in fact, with its defeat. True, the hostilities pushed the countries so far back in development that it is extremely difficult to find a winner, and the war itself is considered one of the most meaningless in stories. Three quarters of the disputed Chaco region passed under the peace treaty into the ownership of Paraguay, but oil was never found in this semi-desert. 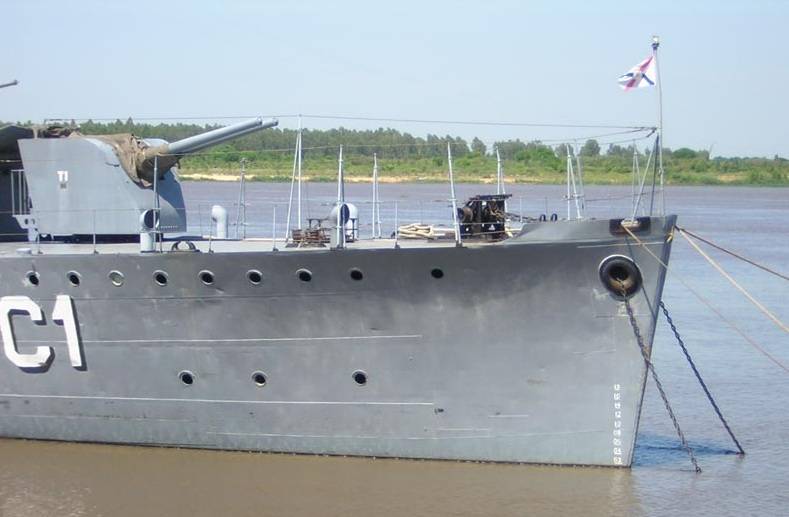 In addition, do not forget the huge contribution to the defense of Paraguay made by the former tsarist White Guard officers, led by generals Ivan Belyaev and Nikolai Ern, who threw the fate of migrants to South America. For these of our compatriots, this was a kind of revenge, because they were opposed by the German officers from the side of the Bolivians, and the general commander of the Bolivian army was General Hans Kundt.

In the 1940 year, Ihinio Morignigo came to power in Paraguay. Soon, he proved himself to be an extreme right dictator, banning most parties and splitting the country. The split took place in society and in the armed forces. In March of the 1947 year, an uprising broke out. The boat Paraguay and its Umaita sistership were being repaired in Buenos Aires at that time. When the news of the uprising reached the crews, the sailors rebelled and took the officers who had been betrayed by Morignigo under arrest.

After that, both ships crossed to the Uruguayan city of Carmelo, which is located at the confluence of the Wakas River in Uruguay. At the same time, anti-aircraft weapons from ships were withdrawn back in Buenos Aires. But the rebels continued on their way, moving up the Parana River. It was here that they were overtaken by the aviation faithful to the regime. The shelling incapacitated Umaita, which eventually ran aground near the Argentinean city of Itusayngo, but managed to withdraw already on August 13. Some of the rebels of Paraguay landed on the islands of Coratei and San Pablo. Here, by the end of July, they were overtaken, isolated and captured by the government troops of Paraguay, landed from the Tirador and Captain Cabral transports (the latter is still in the Paraguayan fleet). However, the ships themselves and part of the team continued to resist, staying afloat and having powerful artillery at their disposal. 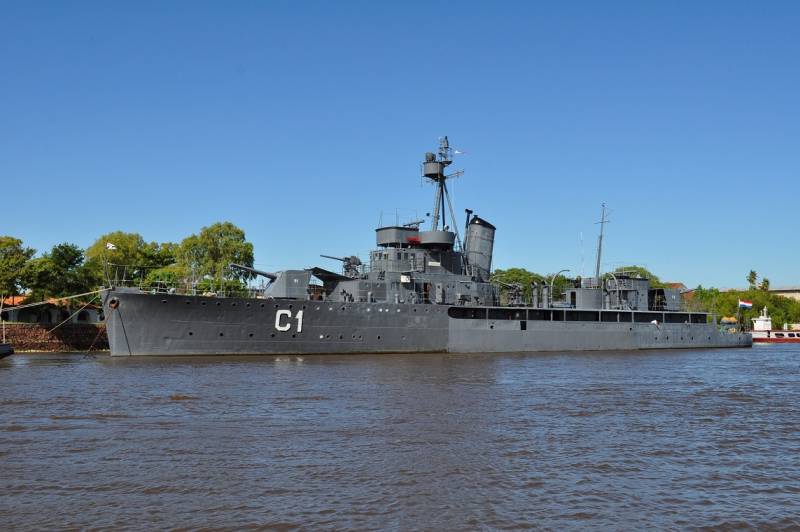 Finally, the rebel gunboats attempted to break into the waters of the Paraguay River. But the coastal batteries, loyal to the dictator Morignigo, did not allow the ships to give the rebels an advantage by breaking through the country's internal waterways. "Paraguay" and "Umaita" were forced to leave for the Argentine city of Ita Ibate, on the Paraguay River. As a result, both gunboats were interned by the Argentinean government. And, as soon as the uprising was crushed by official authorities, they were returned to Paraguay.

The next time the Paraguay entered the historical arena in connection with the military coup in Argentina in the 1955 year. So, in a neighboring country, Juan Domingo Peron flew off his throne, an extreme right-wing authoritarian leader, raving about Mussolini's ideas. It was on board the Paraguay that Peron was sent to political exile. 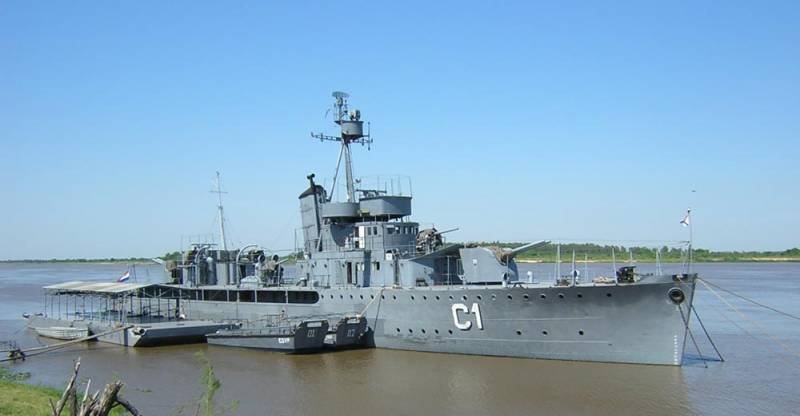 In the 1975 year, gunboats already needed urgent modernization, which had to be carried out, as they say, yesterday. Thus, the ships received new weapons. Two twin 120-mm guns, three 76-mm and two 40-mm guns were installed on Paraguay.

And he, rebellious, asks for the storm

In 1954, an ultra-right dictator and general Alfredo Stroessner came to power in Paraguay as a result of a military coup. For more than 30 years, this Nazi leader continued repression, virtually destroyed all competitive political movements, imposed strict censorship, etc. Alfredo especially hated communism. The number of killed fellow citizens totals tens of thousands, but is still not known exactly. 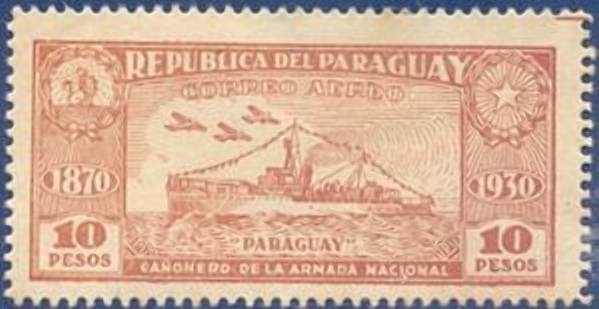 Stamp with the image of "Paraguay"

On the night of February 3 of the 1989 year, infantry and armored units under the command of General Andrés Rodriguez began to seize administrative and military installations in the capital. Early in the morning, the gunboats Paraguay and Umaita, like many years ago, joined the rebels. With their artillery fire, they supported the actions of the ground forces. As a result, fire support from these ships was almost decisive in the success of the uprising, and Stroessner eventually died in exile in Brazil.

At the moment, the gunboat "Paraguay" is on the balance of the Paraguayan fleet and moored on the river of the same name near Asuncion. The possibility of overhauling the ship with the replacement of steam engines with a modern diesel engine is also being considered, because the Paraguay hull is in a fair condition, as operated in a less aggressive freshwater environment.

Sistership “Paraguay”, “Umaita”, escaped the fate of being sawn into metal and is now a museum ship, since it took an active part in almost the entire history of the country in the 20 century.