Contactless bottom mine MIRAB. Ambiguous weapons of the USSR Navy 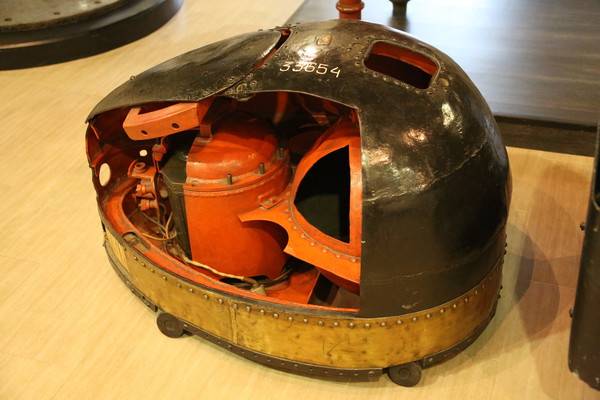 In the thirties of the last century, Soviet engineers were actively engaged in the development of naval mines, including new classes. create weapon non-contact action and landmines for production from aircraft. First aviation a mine with an induction fuse was the MIRAB product, which was put into service in 1939. However, by the time it was put into service, it was not possible to solve all the assigned tasks.

In 1932, a REMIN mine of the Ostekhbyuro development was adopted by the Navy of the Red Army. It was a river bottom mine with an induction fuse, designed for staging from ships. Using a specially designed galvanometric relay, the mine performed target detection and was blown up. Hitting surface of the object carried by the blast in the bottom.

Shortly after the appearance of REMIN in Ostekhbyuro, they began to develop new non-contact fuses with enhanced characteristics. In 1935, similar work allowed to launch a project to modernize an existing mine. According to the results of the revision, the new mine should have been distinguished by increased reliability and the ability to install from a ship or from an airplane.

The new mine received the designation MIRAB (“Induction river aviation mine for shaving flight), under which it remained in stories.

In the MIRAB project, it was proposed to use some successful developments on REMIN. At the same time introducing new devices and components. As a result, the new mine outwardly almost did not differ from the previous one, but the internal equipment was completely different. Properly distinguished and fighting qualities.

Mina MIRAB has retained a characteristic curved body, covering all internal units. Outwardly, the hull resembled a stone, due to which the mine at the bottom of the reservoir did not visually stand out and did not create disturbance of the current. At the same time, the hull was reinforced in accordance with the expected loads when dropped from an airplane.

Inside the outer casing placed all the major components of mines placed in their own housings. The product equipped 64-kg charge of TNT. Next to it was a sealed casing with a battery, a fuse and a hydrostatic safety device.

The main element of the fuse was an induction coil, borrowed from the REMIN mine. It was located round the bottom of the mines and contained 34 thousand. Turns. The coil responsive to the vertical component of the magnetic field goal.

Mirabeau was first used in the detonator two-pulse action. When a pulse arrives from the reel, testified to the appearance of a certain object, start the relay. If a second impulse was received during the operation of the relay, an undermining command followed. Otherwise the fuse returns to standby mode. The two-pulse circuit reduced the sensitivity to interference and increased the likelihood of reliable destruction of the target.

Proximity fuse for Mirabeau provided nerazmagnichennyh defeat surface targets with a displacement of at least 20 t system action radius -.. To 5 m This allowed us to use mines only on the rivers or shallow waters. To avoid injury or operation, the mines should have put at intervals of not less than 25 m Depth setting -. From 1,5 to 8 m. 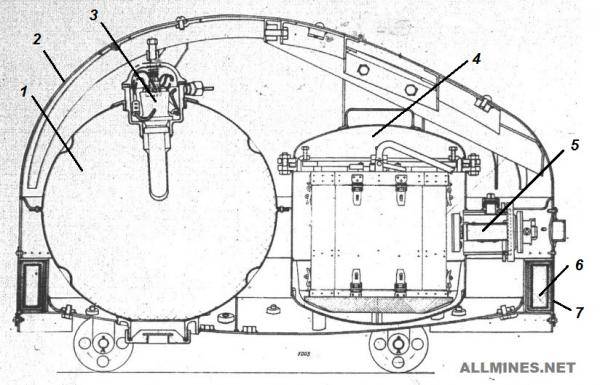 Development of the project was completed in Mirabeau 1937 In the same year, "Ostekhbyuro" disbanded, and the project was taken over by the newly formed CDB-36. This organization has completed the necessary work and brought the mine to adopting. In addition, she later performed the same upgrade.

In tests with the boats or ships, directors no problems. Mina fell from the aft ejector and neatly lay on the bottom. A few minutes later she moved into the firing position, and could hit targets.

Soon, on the Black Sea near Feodosia took the test with discharge from the aircraft. Mirabeau was the bearer of a bomber DB-3. Mina was completed parachute area 3 sq.m. It turned out that when dumping in a wide range of ranges and altitudes, the mine is splashed at a speed of approx. 100 m / s. Hit the water gets too strong, and drew a fuse failure.

Attempts have been made design improvements, but they did not give the desired result. During the tests done 40 discharges, and in most cases the mine broke.

However, Mirabeau was recommended to the adoption. It was proposed to use only with surface directors, but not with the aircraft. The corresponding order was in 1939, and soon after began mass production. In production involving several companies from different cities.

In the same 1939, work began on improving Mirabeau. The main aim was to provide the use of mines aircraft. Also managed to increase the combat characteristics. The resulting sample was called UM - “Weighted Mine”. 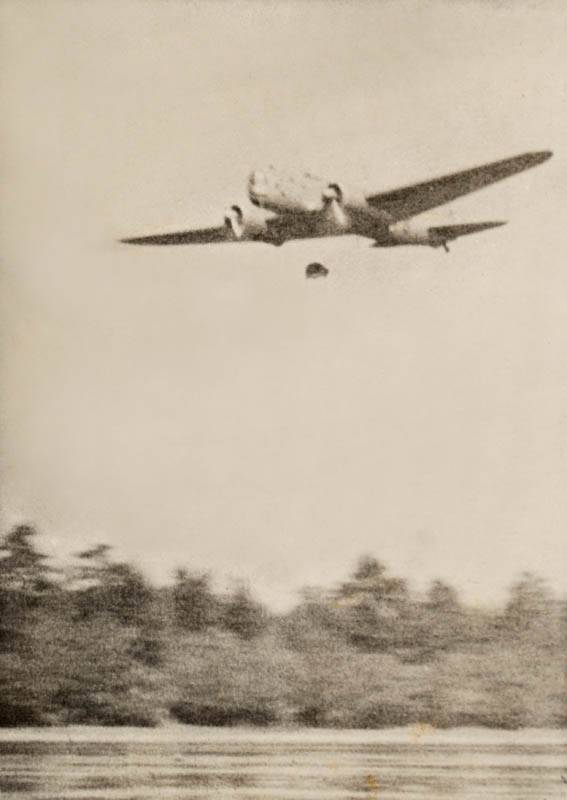 Mine UM received a charge of TNT weighing 260 kg, resulting in a weight of up to 400 kg. The product was equipped with a parachute system from the MAV-1 mine with a dome of 7,5 sq.m. Such a parachute allowed to increase the charge, as well as reduce the splashdown speed to 25 m / s. MIND could be dropped from heights of at least 400 m.

Mina UM had adopted the Soviet Navy in 1941, the plant "Kommunar" in Zaporozhye began preparations for its production, but the beginning of the Great Patriotic War canceled all plans. Apparently, the PA has not gone into mass production.

A few years later, in 1942 36 of CDB-engineers have developed a project of modernization of Mirabeau-1, take into account the shortcomings and operating experience of basic products. In this project, they improved the case, rebuilt the power supply, used a new executive relay and simplified the safety mechanism. Mirabeau-1 successfully passed factory tests, but not entered into service.

The first batches of MIRAB mines were shipped to the customer only in 1940-41. The production of such weapons faced some problems of various kinds, but they managed to establish it. However, by the beginning of World War II, fleet there were less than a hundred serial mines. Subsequently, the release of weapons continued, but its pace left much to be desired, and MIRAB did not become the mass mine of the fleet.

There are several episodes mirabs application on various fronts. So, in mid-July 1941, the armored boats of the Danube Flotilla put 15 mines in the path of the advancing enemy. In early September, on this section of the Danube Germans lost two minesweeper boat. The site was blown up, but apparently to no avail. In August 1942-th in the same area were blown Romanian ship.

In July and August of the 1942, the Black Sea Fleet completed four missions of MIRAB mines. The enemy was able to get information about the places of productions, but clearance of mines continued until the beginning of September - all the time captured the port is not used. At the same time the German side lost several boats and ships.

It is known that the struggle with Soviet non-contact mines has become a noticeable problem for the German mine-sweeping forces. German experts had experience in dealing with non-contact mines of foreign manufacture, but Soviet ones were new to them. In addition, trawling was hindered by a double-pulse fuse. The Germans learned to fight MIRAB, but during this time they lost several ships.

In the domestic literature for many years Mirabeau called a failure model. The appearance of such estimates was promoted by small volumes of output, low reliability of equipment, low charge and the impossibility of staging by airplanes. In addition, until recently, there were no data on the results of combat use.

Information from German documents appeared only a few years ago and noticeably changed the overall picture. It follows that the MIRAB mines, despite the limited use, were able to inflict some damage on the enemy. Moreover, one of them worked after a year at the bottom in a combat-ready position - a very remarkable episode. Thus, the available data no longer allow MIRAB to be considered a clearly disastrous project.

It makes sense to a more balanced assessment. Mirabeau showed acceptable results and can be considered a good weapon for specific tasks. It was intended to work in shallow water and in practice coped with it. At the same time, it could be of great benefit if it could be dropped from aircraft. However, the UM modification suitable for use by aviation did not reach the fleet. In addition, the results of combat employment adversely affected small production volumes.

Thus, in other circumstances, the MIRAB mine could remain in history as one of the most interesting and well-deserved examples. However, not all design and production tasks were solved, which limited the potential of the weapon. Nevertheless, in the resulting form, the MIRAB mines contributed to the fight against the enemy - even if not too big.