They came to ruin someone else's house ... (“Rot Fuchs”, Germany)

21 September 2013
134
Constantly flashing dubious discussion about German prisoners of war in the USSR forces me to share with the readers my thoughts on this issue. At the end of the Second World War, 11,2 millions of Germans from the Wehrmacht and the SS were captured by the Allies. About 8 millions of them were in the Anglo-American, and over 3 millions - in Soviet captivity. The Germans expected their respective countries to be treated with their prisoners of war in accordance with the provisions of the Geneva 1906 Convention, the Hague Rules of the Ground War 1907, or the 1929 Prisoners of War Convention. thousands of times violated these conventions. Most of the approximately 1939 of millions of Soviet prisoners of war did not even get canned food. The “Memo for the protection of Soviet prisoners of war” from September 1945 6 says:


“Ruthlessly resort to the most extreme measures at the slightest sign of discontent and disobedience! To crush the resistance mercilessly apply weapon. Immediately shoot without warning at a running prisoner of war, firing aimed fire. (...) On the other hand, to a working and obedient prisoner of war, too, one cannot be soft. He will take it as a weakness and draw his own conclusions. ” 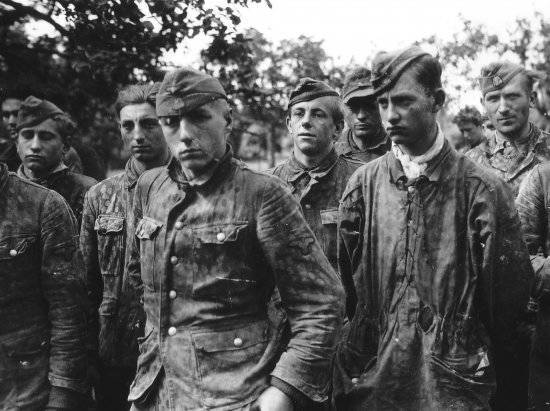 However, these were not violent measures that led to the mass death of Soviet prisoners of war. The reason for the large losses was, above all, the systematic lack of food supply, inspired by the order of the High Command of the Wehrmacht.

“... Mostly in 1941 and 1942. diets were introduced and approved, with full awareness of the consequences in the form of starvation of thousands and thousands of prisoners. This policy of destruction consistent with the policies of the famine of the civilian population, practiced in the occupied territories of the Soviet Union. Despite the fact that food rations constantly increased, until the very end of the war, they did not reach either in size or in quality food standards for non-Soviet prisoners of war. Especially in 1941-1942. among the prisoners, epidemics of dysentery and typhus flared up, tens of thousands of victims. Due to prolonged chronic malnutrition in conditions of overwork and scant medical care, Soviet prisoners of war remained easily susceptible to infectious diseases in the second half of the war. Mortality has stabilized at a high level, mostly due to a large number of tuberculosis diseases ... ”

This is written by Hans Reichelt in his book, published in 2007, the book “Germans Returning from Captivity”.

Only from July 1941 to February 1942, thus, in eight months, about 10 million of Soviet prisoners of war died from frostbite and inhuman treatment in German concentration camps. Exactly calculated by the Nazi leadership, the “famine” found its terrible embodiment. Tens of thousands of Red Army soldiers taken from Russia were killed during transportation or died of epidemics in prefabricated camps. 2 to 1941 1945 of millions of Red Army soldiers got into German captivity, of which about 6 630 survived to the end of the war. Out of about 000 of millions of German prisoners of war who were in Soviet captivity, almost 3,3 million returned home.

Who today is engaged in the issue of prisoners of war, must objectively recognize that Hitler's Germany began the war against European and other countries of the world. All the soldiers of either side of the conflict who were captured became victims of the criminal Nazi ideology, which aspired to world domination and disgraced the German race.

“... Despite numerous regrettable cases of the death of German prisoners of war, in their sum they didn’t even treat them as savagely as the Germans did during the war years with Soviet prisoners of war ...”

“... In most countries where German soldiers were interned after the war, they were attracted to reconstruction work. In France, it looked like in the Soviet Union, and in England - as in the United States. You can not kill the dead of one army killed by another army. However, however, we must constantly consider this context when we are told, or we read about individual destinies, история which causes a lump in the throat ... " (same author)

Monstrous bloating in the media, historical literature or in modern politics of all these excesses in captivity, especially Soviet, pursues only one goal: even today to continue the anti-Soviet harassment! In 2003, a thick, weighty volume of Guido Knopp came out - a venerable historian of the TsDF TV channel called “Prisoners”, where there is such a passage:

"... Siberia has become synonymous with the suffering and distress of eleven million German prisoners of war ..."

However, as the reader himself can be sure, neither the figure nor the geography is true. However, Kuppp’s thoughts are accepted by the mass public. Another example is Folk Koop’s book Under Occupation in 2008 about the Soviet occupation policy in Germany, this work is more of an anti-Soviet leaflet than a serious historical study. It does not even need to be taken into account. However, some should recall the words of Konrad Adenauer: "There are things that I don’t even talk about with myself."

At the end of 1949, the release of German prisoners of war from the USSR ended with the transportation of 17 538 persons. The Soviet news agency TASS in May 1950 reported that the repatriation was “fully completed” by this flow. From that moment only those accused of war crimes remained in custody in the USSR. According to Soviet data, they were 35 000. This is the serious work of Andreas Hilger (“German prisoners of war in the Soviet Union from 1941 to 1956”, Essen 2000), released under the patronage of the Hannas Arendt Institute of Dresden *. In his studies, including those in the Russian archives, he came to interesting conclusions that the Soviet Union was "... clearly intends to ... respect the basic principles of international legal standards for the treatment of prisoners of war ..." and the fact that "... the USSR, in its policy towards prisoners, did not pursue goals of extermination or revenge ..." There was no fixed time period, "... to which would have been planned or carried out actions for the destruction of German prisoners of war ... "

Hilger relies on data from Soviet 2 388 443 attacks by German prisoners of war, of which 2 031 743 was repatriated. 356 687 died in captivity. The high mortality rate was due, in particular, to the poor supply that caused the war:

And those about 35 000 of German prisoners (they returned to Germany before 1955), who were convicted by Soviet courts for Nazi and war crimes, according to Hilger, made up an “insignificant share” of the total.

There is nothing to add, since the bourgeois media and historians are unlikely to be suspicious of the spread of frivolous historiography because of the staff of the Hannah Arendt Institute.

* Research Institute at the Technical University of Dresden. Engaged in the study of fascist and communist dictatorships. (approx. transl.)