The battle in the Atlantic. Ram in the night

With shotguns and a knife

History underwater fleet full of tragic events that happened on all oceans and seas during the Second World War. The night battle during the storm between the American destroyer Bori (DD-215 Borie) and the German submarine U-405 in the waters of the North Atlantic stands apart. 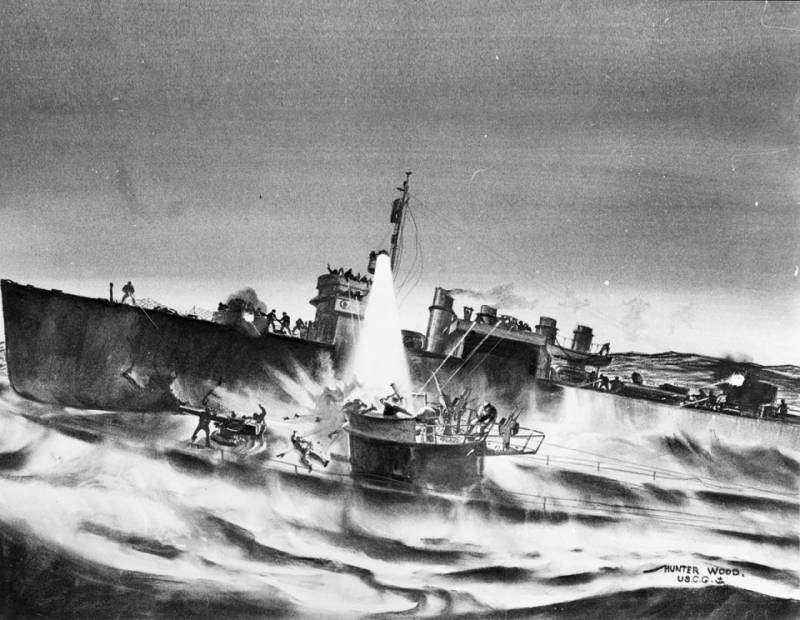 Submarines and destroyers commonly used torpedoes and depth charges. But early in the morning of November 1 1943 of the year during the battle as weapons rams, shotguns, cartridges, and even a knife were used. A dramatic duel during which the crew of each ship demonstrated skill, courage and perseverance.

In the fall of the 1943 of the year, Bori was part of a search and strike group created around the Card carrier (CVE-11 Card). The commander of the Bori was 30-year-old Captain-Lieutenant Charles G. Hutchins, the youngest destroyer captain in the Navy at that time. After escorting convoys to the Atlantic, the group headed north at the end of October, past the Azores, as submarine hunters. 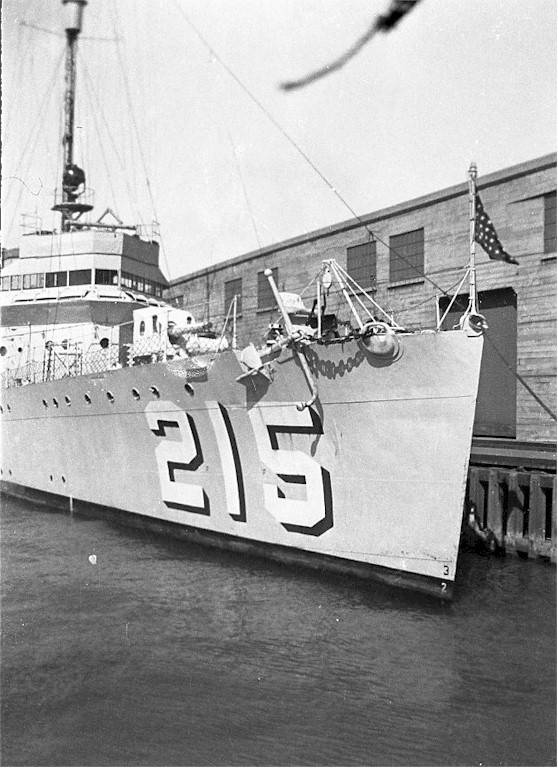 On November 1 of 1943 of the year, a bright speck appeared on the screen of the Bori destroyer radar at a distance of 7300 m: radar contact with a submarine! Hutchins increases the speed of the ship to 27 knots, jumping up and down waves whose height reached 4 m, holding the signal until it is lost at 2500 m. Bori slows down to 15 knots and establishes sound contact with a sonar at 1800 m. Having reduced distance to 450 m, destroyer command "Bori" conducts deep-field bombing. When the destroyer sailed from the point of attack, during the restoration of sound contact, it was noticed that after a characteristic hiss on the surface of the water illuminated by a searchlight, a submarine appeared. 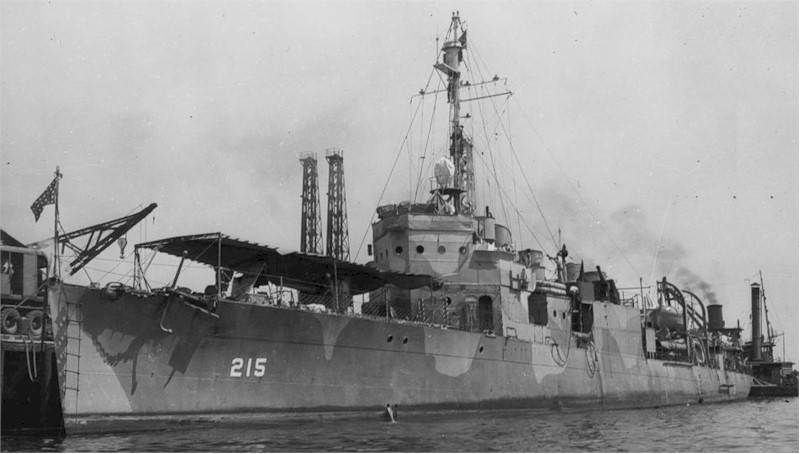 The destroyer will keep the U-405 lit throughout the battle, with one short exception. Lighting made it possible to see the emblem of the 11th submarine flotilla of Kriegsmarine, a polar bear, on the cabin of a light gray submarine.

Hutchins opened fire with 102-mm guns and 20-mm machine guns from a distance of 1300 meters and went closer, the boat also started firing. So the battle began, one of the strangest during the war, as fierce as unusual.

The commander of U-405 is Corvette Captain Rolf-Heinrich Hopman. 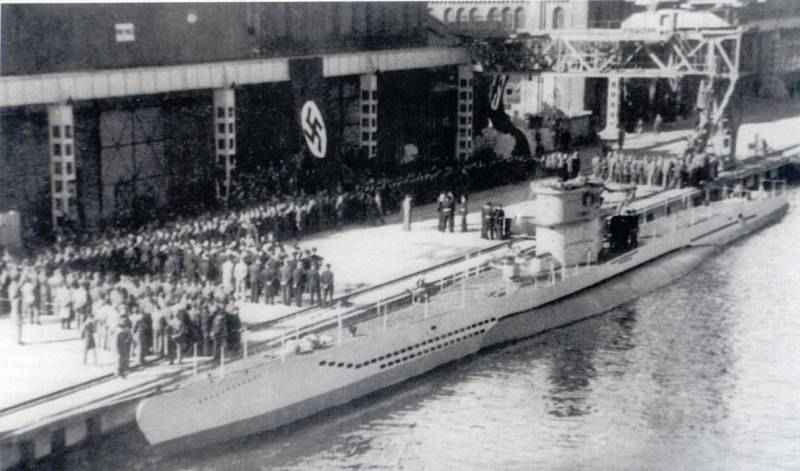 While the shells flew over the cabin of the submarine, and the bullets of the 20-mm automatic guns "Oerlikon" tore metal sheathing, the artillery crew of the submarine ran to the gun. A series of six 20-mm guns mounted at the stern of the deckhouse made holes in the bridge and the middle part of the destroyer hull.

Night, 4-meter waves, ships are thrown like chips, darkness is cut by flashes of converging streams from 20-millimeter bullets and the roar of guns, the screams of dying and wounded.

U-405 fought desperately, the gun’s crew lay dead, and not having had time to fire a single shot, other crew members rushed to him when a salvo of 102-mm destroyer guns dared the cannon from the deck of the submarine. 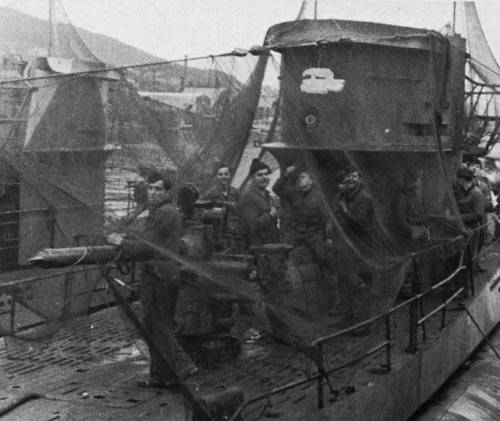 Spinning like an eel, Corvette Captain Hopman, using the boat’s excellent maneuverability, tried to tear himself away, Hutchins demonstrated excellent navigation, and the “Bori” did not let out the enemy’s searchlight, mercilessly beating him. At some point, a sailor appeared on the wheelhouse, waving his arms, as if asking the Americans not to shoot. Lieutenant Hutchins ordered a ceasefire. But the gunner of one calculation of the 20-mm assault rifles took off his headphones and continued to fire, literally tore the gesturing German sailor. U-405 began to maneuver again, and the battle continued.

Bob Maher, Bori crew member:
... shortly before this wire, the gun commander’s telephone line became entangled in empty shells that rolled around the deck. Angry, he tore off the phones and threw them onto the deck. Seeing the man waving on the U-405 deck, Captain Hutchins ordered: "Cease fire," but the cannon in the stern continued to fire. Hutchins tried to shout down at the gun command, “Cease fire, cease fire”, unfortunately, he was not heard. Seeing this one man standing alone in the midst of destruction and shooting was amazing. This did not last long, because after a few moments the body still stood, arms extended, but the head disappeared. If the tangled telephone line did not cause the death of this person, it would be the bravest of the team to voluntarily under fire to signal the surrender.

Deciding to prevent the U-405 from hiding, Hutchins increased speed to 25 nodes and went into ram. Hopman tried to avoid the blow, but began a maneuver to dodge left too late.

A sudden wave lifted the Bori up and it fell onto the U-405 deck in the bow of the submarine, at an angle of 30 degrees. For the next ten minutes they would be locked in a mortal embrace.

The destroyer guns could no longer fire at the boat. A U.S. review of this battle, published by the U.S. Admiralty, states:
... Lieutenant Brown fires on the deckhouse and deck of the Tommy Gun, Stoke Southwick killed the German with an abandoned knife, Walter S. Cruz knocks down a German sailor from the deck with an 102-mm shell.

The destroyer sailors fired from everything at hand: machine guns, flare guns, rifles.

German submariners unsuccessfully tried to get to their 20-mm guns. When one was killed in his place, the next one ran out of the wheelhouse. Courage or despair?

Suddenly, the waves that used to hook the ships together, sharply disconnected them. This allowed the destroyer and submarine to continue the battle. When the mortally wounded boat departed, Hutchins realized that his ship was seriously injured. The front engine room was completely flooded, but the enemy was still alive, and Hutchins led the damaged destroyer in pursuit.

Corvette captain Hopman undertook a series of evasion maneuvers, trying to break away and retired at a distance from the destroyer at 350 m. This allowed the Bori to open fire from the main caliber. One of the shells hit the diesel exhaust on the starboard side of the submarine and, possibly, damaged the stern torpedo tube. Then the destroyer fired a torpedo on the U-405, but to no avail.

The submarine began to rotate in a circle, and the destroyer because of its very wide turning radius did not keep up with it. During this maneuver, Lieutenant Hutchins noticed that the U-405 was constantly trying to turn its stern towards “Bori,” possibly planning to attack Bori. He ordered to put out the searchlight, so as not to give out the location of the ship. The submarine tried to hide in the night. The destroyer, increasing the speed to 27 knots, tracked the position of the boat using the radar, reaching a favorable position for the attack.

Despite the damage to the ship, Hutchins wanted to repeat another attempt to ram. They turned on the spotlight, and he again found himself on the path of the collision of the U-405, which, in turn, tried to ram the Bori into the starboard side. Hutchins abruptly turns the destroyer to the left and conducts an attack with depth charges in front of the bow of the submarine. The submarine literally throws out of the water and it stops two meters from the starboard side of the Bori.

Was that the end? No! U-405 turned to the stern of the destroyer and tried to sail away, but at a significantly reduced speed. Maneuvering, Hutchins again releases a torpedo, which takes place at 3 meters from the boat. Only after a hail of new attacks from the 102-mm guns that hit the starboard side, did the submarine stop. A stream of white, red and green rockets soared into the sky with U-405. This time, Lieutenant Hutchins brought the order to cease fire to all the guns. The shooting calmed down after an hour of battle. One or two people emerged from the wheelhouse and started throwing yellow rubber life rafts into the water. They were tied together and created the appearance of very large hot dogs. U-405 quickly settled on the stern, and what was left of the crew, about 15-20 people, managed to get off and move to the rafts. The submarine plunged vertically into the cold waters of the Atlantic. German submariners on their rafts continued to launch flares, while the destroyer slowly moved towards them to pick them up. Suddenly, the destroyer sonar transmits that he hears the noise of a torpedo. The destroyer conducts an anti-torpedo maneuver, as a result of which it passes through the life rafts of the survivors and leaves at the highest possible speed.

By dawn of November 1, only one engine was running, and salt water contaminated marine fuel. The lower armor of the destroyer in the bow and sides was badly damaged. Bullet holes from U-405 shells gaped everywhere on the ship, and there was water in the hold. The front engine room was finally flooded, which led to the shutdown of the generators and the loss of electricity. The loss of all electric power made ship management and repair extremely difficult. The emergency radio turned off, there was heavy fog, the ship was rapidly gaining water. All the remaining fuel had to be used for the pumps to work, trying to get ahead of the incoming water. To help keep the ship afloat, Hutchins gave orders to lighten the ship. Everything that could be thrown was thrown overboard. But the ship continued to slowly sink into the water. Only at 11 hour. 10 min aircraft carrier "Card" received a distress signal from the destroyer. The destroyers Goff (DD-247 Goff) and Barry (DD-248 Barry) were sent to help. The Avengers took off from the aircraft carrier, the crews of which discovered the Bori. 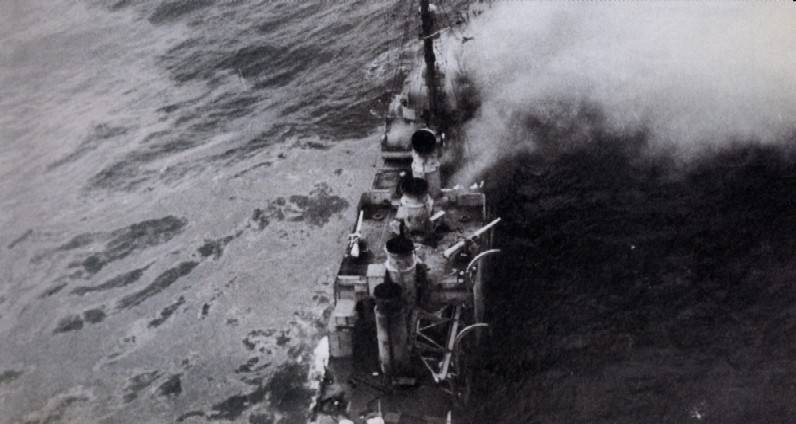 At 16 hour. 10 min due to the threat of a sudden capsizing of the ship, Lieutenant Hutchins ordered the destroyer to leave. The crew put on life jackets and moved to life rafts. Due to the low water temperature (+ 7 ° C), 4 meter waves and severe exhaustion, three officers and 24 sailors did not wait for help.

“Goff” and “Barry” at the dawn of November 2 tried to sink the DD-215 using torpedoes, but to no avail. Only after the Avengers bombardment did Borie finally sink in 09 hours. 55min. 2 November 1943 year. 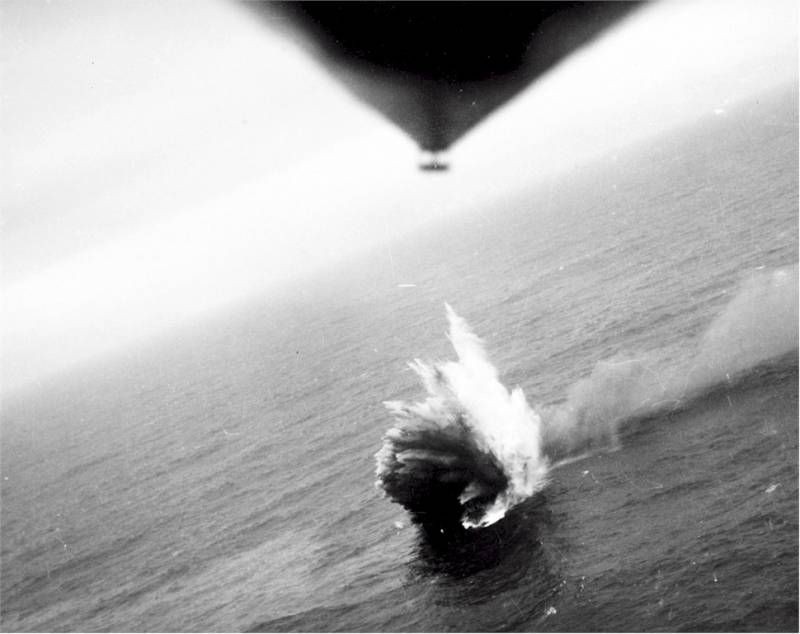 This fierce battle between the US Navy destroyer and the Kriegsmarine submarine in November 1943 along with the similar fierce battle of May 6 1944 west of the Cape Verde Islands between the American destroyer Buckley and U-66 formed the basis for the script for the feature film "Duel in the Atlantic "(in the original:" Under us is the enemy ").

In 1958, the film won an Oscar for best special effects. 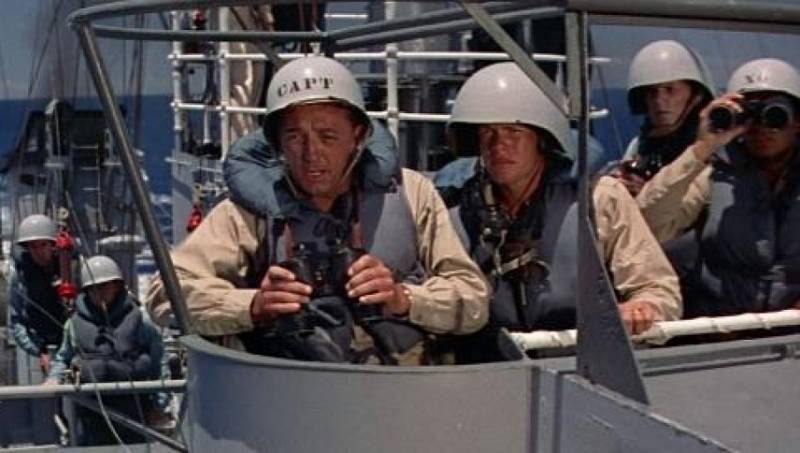 Shot from the movie "Enemy is Beneath Us"