The mysteries of the space gun. Artillery installation "Shield-1"

November 3, 2019
29
In the past, the development of the rocket and space industry was directly related to military projects. Considering the threats of the future, superpowers seriously prepared to fight in orbits, and even created a special weapon for this. In the mid-seventies, the USSR launched the Almaz military space station into orbit, on board of which was the Shield-1 artillery mount - the first and only one of its kind. 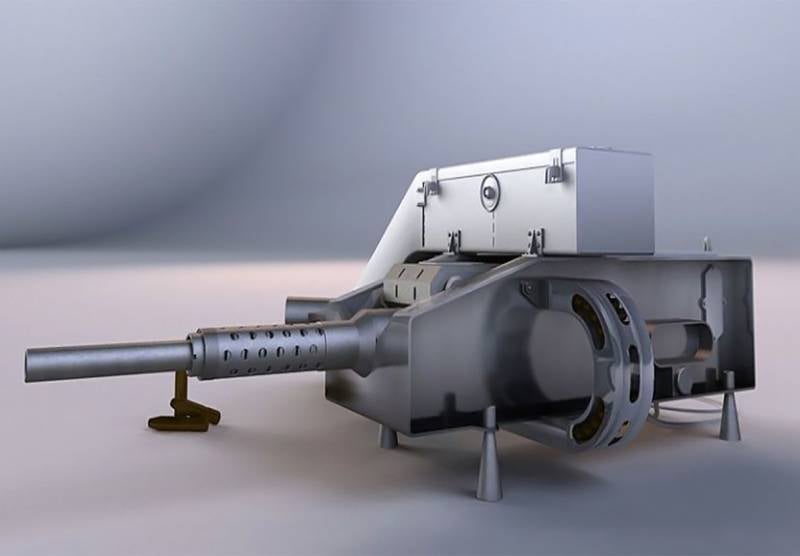 Reconstruction of the system "Shield-1" / Р-23М

According to known data, weapons for the space station were developed back in the early seventies and tested in 1974-75. However, for a long time after this, the Diamond and Shield-1 projects remained secret. Later, in the nineties, separate information began to appear, but they allowed us to draw up only the most general picture.

To date, new information has appeared. Moreover, even a prototype (or layout) of an artillery mount was shown. However, the available data is still not complete, and sometimes contradict each other. Nevertheless, open information already allows us to present the goals, progress and results of the project.

It is known that the Shield-1 product was developed at OKB-16 (now Design Bureau Tochmash) under the guidance of A.E. Nudelman. The aim of the project was to create a special artillery mount suitable for use on spacecraft. 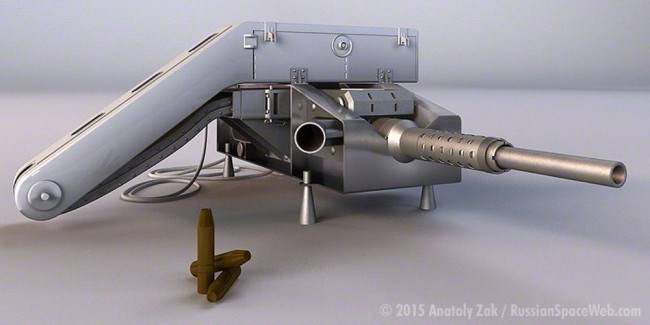 At that time, new military spacecraft were being created, and the customer was seriously afraid of opposition from a likely enemy. Using his spacecraft, the enemy could disable or damage Soviet satellites or orbital stations. To protect against such a threat, it was proposed to use certain weapons. First of all, the idea of ​​installing an automatic small-caliber gun was worked out. Then it was proposed to create a self-defense rocket system.

For a long time, only the fact of creating a gun for the spacecraft was known. It was also known that this system had an 23 mm caliber and was based on one of the existing guns. This means that as part of the Shield-1, HP-23 or P-23 products developed by OKB-16 could be used.

In October 2015, the Zvezda television channel made a great gift to all lovers of space technology and artillery. In the next issue of the Military Acceptance program, for the first time they showed an experimental (or prototype) model of the artillery system for the Almaz series spacecraft. In addition, the transmission revealed some design details. 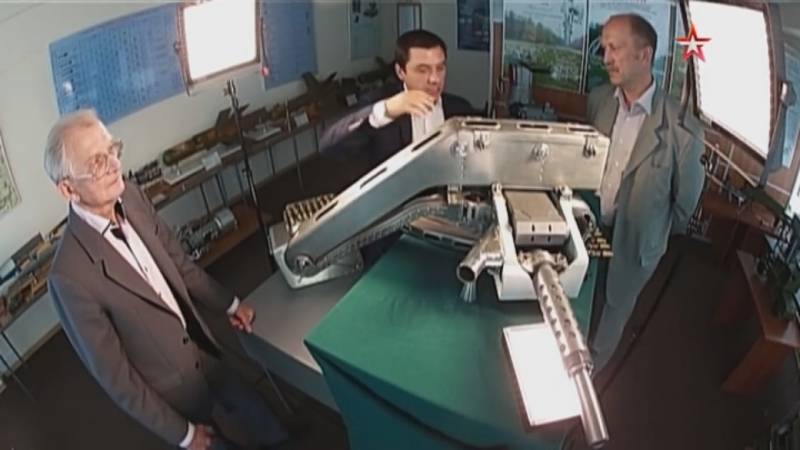 However, the surprise from Military Acceptance was mixed. The program answered some questions, but left new ones. Announced information about the name, ammunition, design, etc. did not match the known data on domestic weapons. At the same time, the available amount of information on the topic has seriously replenished.

Riddles from the "Star"

In the television program, the space gun was designated as R-23M "Kartech". However, in the available literature under this name appears modification aviation R-23 guns for a special shot with ready-to-use striking elements - buckshot. However, in the case of the television program, the name of the product seems to have been obtained directly from the development company.

Together with the cannon launcher, they showed ammunition tapes. It was claimed that for the space gun a unitary telescopic cartridge was created with a fully recessed shell, according to the type of product 23X260 mm for the P-23 gun. However, the cartridges shown were noticeably smaller than the 23-mm rounds. At the same time, they were clearly intended for the demonstrated gun, as evidenced by the dimensions of the cartridge box and the supply path. 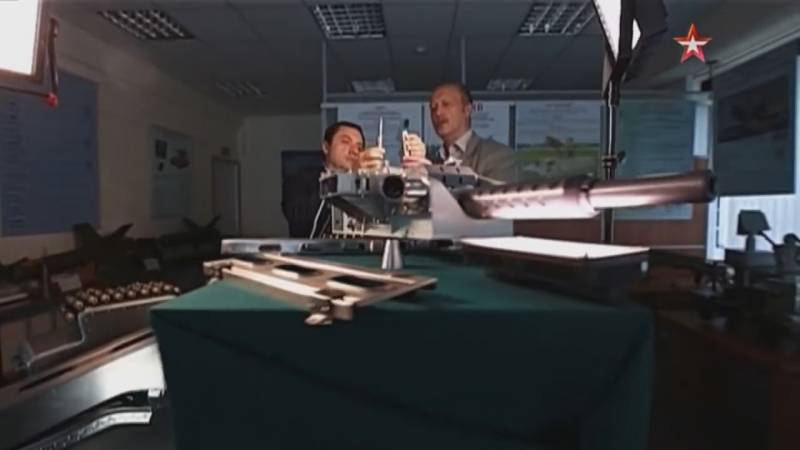 The product description in the TV show raises questions, but the demonstration of the real product is commendable and grateful. Prior to the Military Acceptance, the exact appearance of space weapons remained unknown.

Product from the screen

Consider the installation shown by the "Star", as a whole, and its individual components. Fortunately, the proposed Shield-1 product was shown in a fully assembled and partially disassembled state, which allows a better study of it.

The artillery installation includes several main components. This is actually an automatic gun, a frame for its installation and means for working with ammunition. The installation layout is interesting. A frame with a gun is placed at the bottom, and on top of them a box of complex shape is installed, containing a cartridge belt. A sleeve is removed from the side of the box supplying the tape to the weapon. On the left side of the gun provides a rigid semicircular guide for the tape. On the right is a pipe for ejecting cartridges forward. 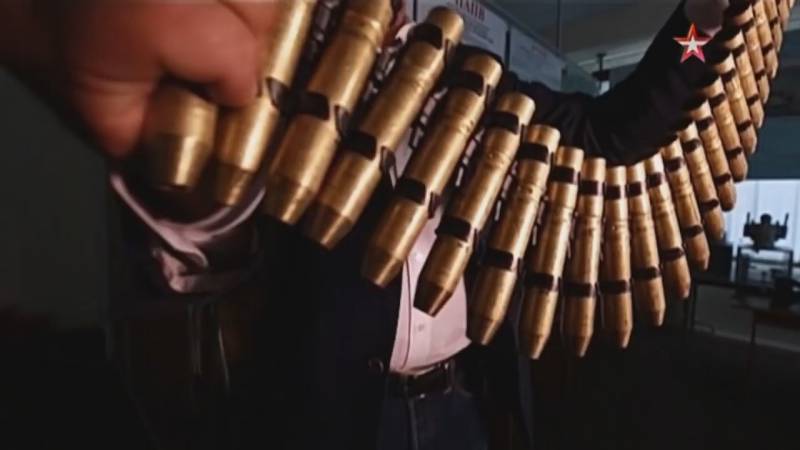 Recall, the basic P-23 was an automatic revolver gun with three movable chamber. The rotating cartridge chamber was located at the rear of the receiver, and the tape receiver was placed above the breech of the barrel. In automation, a system of three gas engines operating in series was used. Special telescopic ammunition was fed into the chamber by a shift back; the sleeve was thrown forward. Ignition was carried out using electric trigger. A special scheme made it possible to reduce the dimensions and mass of the gun while obtaining high combat characteristics.

Apparently, the museum space gun really had a caliber 14,5 mm. In this case, in essence, it was a large-caliber machine gun made on the basis of the P-23 gun. The main design decisions were saved, but the product was scaled to the caliber 14,5 mm - and at the same time they created a telescopic cartridge similar to the existing 23x260 mm. A similar design could really show a rate of fire at the level of 5 thousand rds / min.

According to well-known data, the Shield-1 gun installation was to be rigidly mounted on a carrier spacecraft. Guiding weapons was carried out by maneuvering and turning the entire ship. It was proposed to compensate for the return of weapons with shunting engines. Management was carried out using a separate remote control at the central post of the carrier ship.

The Shield-1 product was intended for the Almaz station. The only prototype of such an installation was mounted at the Almaz-2 station, also known as Salyut-3. The launch of this station took place on 26 on June 1974. A few days later, the Soyuz spacecraft with the crew of P.R. Popovich and Yu.P. Artyukhina. 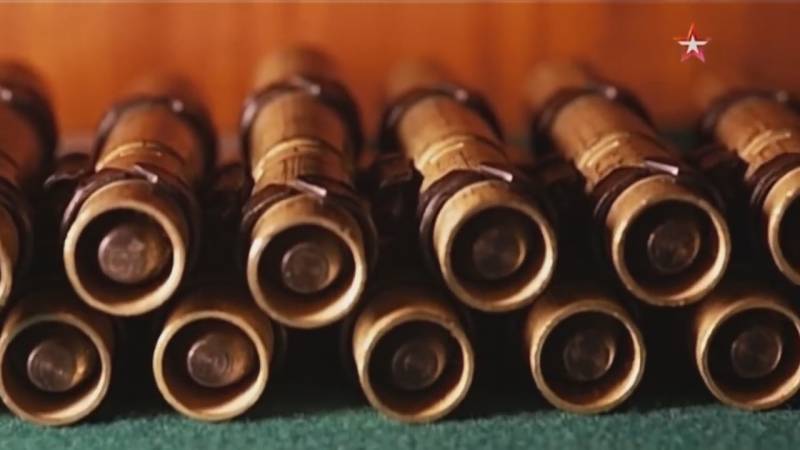 Cartridges of a special design, cannons of shells with bullets are visible

For a number of reasons, the gun mount was not tested with the crew. Shooting was carried out only on 25 of January 1975 - and immediately before the Salyut-3 arch from orbit. Already after the issuance of the brake impulse, the unit, on command from the Earth, fired several shots. Over the next few minutes, the prototype burned in dense atmospheric layers along with the carrier.

The first and last tests of the Shield-1 installation took place in 1975. This development was not further developed. By this time, the Shield-2 project had been launched, the purpose of which was to create a self-defense system based on the space-to-space guided missile. As far as we know, this complex was not brought to real tests.

Over time, the military revised their plans for the use of outer space and, among other things, abandoned the armament of the spacecraft. Further work on guns or missiles for satellites and stations was canceled. As a result of this, the Shield-1 / P-23M / Kartech installation remained one of a kind. To date, there are no weapons in orbit. Even pistols are excluded from the NAZ astronauts.

Almost 45 years have passed since the first and last tests of the space gun. Still complete and accurate история The Shield-1 project is not freely available, which is why it has to be collected bit by bit, evaluating various data and filtering out some of them. It is hoped that in the future, the domestic space and rocket and artillery industries will nevertheless talk about one of the most noteworthy projects and answer the remaining questions. The Shield-1 project and other bold developments are too interesting and important for history to remain oblivious.