Where are you, master? Baltic countries try to get US attention back

October 18 2019
24
The three Baltic republics (Latvia, Lithuania and Estonia) are trying with all their might to deepen military cooperation with the United States. For the sake of this cherished goal, they are ready for anything, including the complete neglect of their own real interests. 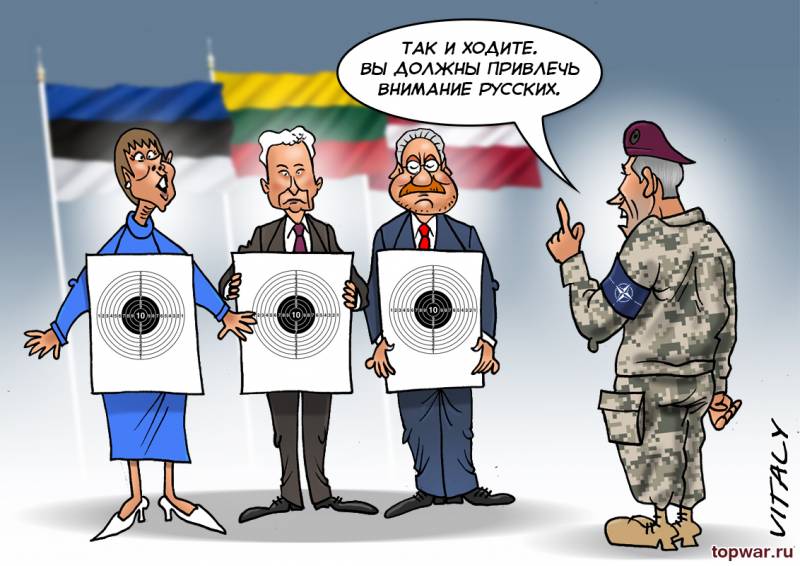 The model of the "eternal vassal"

The Baltic states, both during their short-term twenty-year sovereignty in the first half of the twentieth century, and in the post-Soviet period, were characterized by the eternal search for overlords, "masters."

Not being countries self-sufficient from the military-political point of view, the Baltic republics have all the hopes of a "good master": he must defend himself and indicate how to live and help him with money. In exchange ... And what in return? Almost nothing can be offered to small countries with a meager population, unless they provide their territories for military bases, since there is a common land border with Russia.

Raimundas Karoblis, Minister of Defense of Lithuania, made a similar statement. It turns out that in Vilnius they sleep and see how the Americans will expand military cooperation with Lithuania. By the way, the NATO battalion is already deployed in Lithuania. But Vilnius is not enough. Lithuanian leaders want to attract Washington’s greatest attention to their small country, and for this, like their colleagues from Estonia, they are ready for a lot.

There are several main reasons for this behavior of the Baltic republics. Firstly, the “friendship” with the USA and NATO gives some special meaning to the very existence of tiny states on the Baltic Sea. They appear as some outposts of Western civilization on the border with the hostile "Russian world." Therefore, in Lithuania, Latvia and Estonia they love to fan up myths about the Russian threat, about the Soviet occupation, which supposedly disrupted the natural course of events - the development of small countries in line with European civilization. 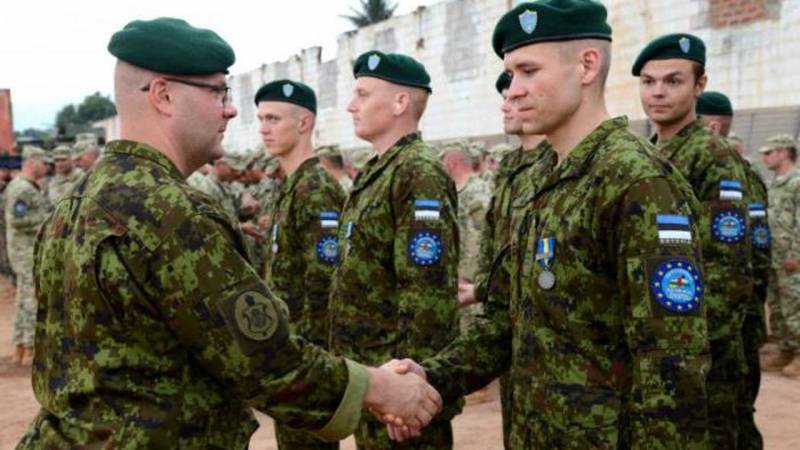 Secondly, and perhaps, firstly, close relations with the US and NATO are money. Anti-Russian hysteria, according to Vilnius, Riga and Tallinn, will help beg Washington and Brussels for as much money tranches as possible to strengthen their defense capabilities and the information war.

In fact, this fortification is meaningless, because regardless of the size of the Lithuanian, Latvian or Estonian armies, they will never be able to confront the Russian armed forces. But then the money is on strengthening the border, training military personnel, supplies weapons You can earn. And the authorities of the republics are well aware of this.

Thirdly, now in the Baltic States they are very concerned about the U-turn towards Poland. And there are reasons for concern. Poland is now the only major European country that follows almost unconditionally in the wake of American foreign policy. In Warsaw, they are ready to quarrel even with Brussels, if only not to quarrel with Washington.

For the American leadership, Poland is much more interesting than the Baltic countries, since it has a much larger territory and a much larger population. And in terms of territory and population, Poland is a full-fledged country, and not a “political dwarf”. Plus, unlike Latvia, Estonia and Lithuania, Poland has a practically mono-ethnic state, with the exception of migrants. There are no Russian-speaking problems, which make up one third of the population in Latvia.

Nevertheless, the Polish Army is not a couple of the Estonian, Latvian and Lithuanian armies, although it does not reach an independent confrontation with a strong enemy. Finally, Poland is ready, just like the Baltic republics, to provide its territory for American military bases. Only Poland has more territory, which means there are also opportunities to accommodate Americans.

But increasing the pace of cooperation between Washington and Warsaw is very worrying for the Baltic republics. This is not the notorious jealousy, but well-founded fears that cash flows may go a little in the wrong direction and then Riga, Tallinn and Vilnius will remain completely crumbs, if they remain at all.

Now the Baltic republics are trying with all their might to convince the United States of their need, to push Washington to resume the policy of supporting Vilnius, Tallinn and Riga, which was characteristic of the administration of the previous US President Barack Obama. In pursuit of American attention, the Baltic states even promise to pay for the deployment of American troops on their territory, as Donald Trump insists, trying to shift the funding of US troops to host countries.

But Washington is well aware that, firstly, payment amounts will be insignificant - the Baltic republics have practically no money. Secondly, most likely, they will pay from the same American tranches that are supplied to the Baltic republics to strengthen national defense and security.

US and NATO military presence in the Baltic states

The US military and political leadership does not currently consider Latvia, Lithuania, and Estonia as significant military allies in Eastern Europe. It is much more interesting for the Americans to develop relations not only with Poland, but also with Romania. And even Ukraine is of much more substantial interest from the military-political point of view than the small Baltic states.

Nevertheless, to drag in its territory American and Western European soldiers for Latvia, Lithuania and Estonia is one of the main tasks. And I must say, in part they cope with it. So, an American armored battalion has already been deployed in Lithuania. We are talking about the 1st battalion of the 9th regiment of the 1st division of the American army, which includes 30 tanks M1 Abrams, 25 Bradley Infantry Fighting Vehicles, 70 wheeled vehicles. The number of personnel of the battalion is 500 people. They will be placed in the city of Pabrade, 10 kilometers from the Lithuanian-Belarusian border.

In addition to this battalion, a mechanized battalion of the German Bundeswehr, infantry companies of the armed forces of the Netherlands and Belgium, a mechanized company of the armed forces of the Czech Republic and even an infantry detachment from Luxembourg are deployed in Lithuania. The total number of NATO military in Lithuania is about 1,5 thousand people. In the village of Mumaychay, the only NATO military warehouse in the Baltic states is located, where armored vehicles, tanks are located, weapons and ammunition are stored.

Finally, in the vicinity of the city of Šiauliai is the military airfield Zokniai, which receives airplanes from the United States and other countries of the alliance. In the 2020 year, the Baltic states are preparing to host the Defender Europe military exercises, in which up to 37 thousands of NATO troops will participate. 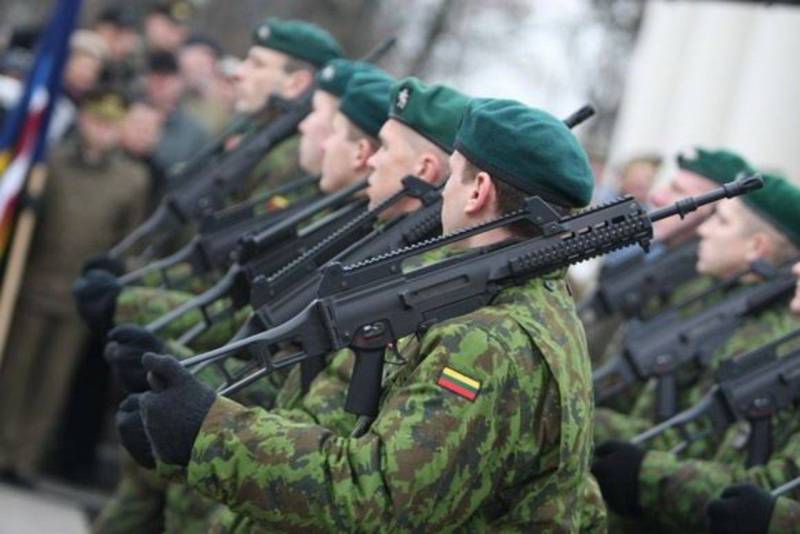 The presence of the American and NATO military in Lithuania, Latvia and Estonia is also symbolic. This is the eastern border of the "American empire" opposing Russia. And in the Baltic countries now they are also trying to focus on confronting the Russian threat as a unifying idea of ​​the West.

In addition to the Americans, Latvia, Lithuania and Estonia call on military men from all NATO countries, conduct joint exercises with them, and in every possible way emphasize the importance of the military presence of foreign states on their territory. Although, it would seem, for a normal country, the very fact of the presence of a foreign military on its territory is offensive.

Reducing financial assistance and withdrawing part of NATO troops is the worst nightmare for the Baltic republics. That’s why Vilnius, Tallinn and Riga are striving to protect themselves through constant support of military psychosis in society through the media. Baltic politicians do not tire of reminding the Americans of the Russian threat, they attribute to Russia the desire to seize certain territories of Estonia, Latvia or Lithuania, or even completely occupy the "small but proud" republics.

But all this clanging of weapons is taking place against the backdrop of a rapid deterioration in the socio-economic and demographic situation. The outflow of young and capable population outside the Baltic republics continues.

Economically, the republics, which at one time were the "western window" of the Soviet Union, for thirty years of their sovereignty have not been able to prove their worth. And in order to answer our own citizens the question of why we live at such a level, the authorities of the republics have to constantly support the myth of the Russian threat.

However, the current situation is increasingly boring to Americans. But the main problem is associated with growing mistrust on the part of large countries - EU members. Germany and France understand that the Baltic military-political ambitions have to be paid from the EU budget, that is, from German and French money. At the same time, relations between Moscow and Berlin themselves are much more acceptable than those of the Baltic states.

Europe is also dissatisfied with the fact that Europe bears the main burden on the maintenance of the Baltic states, but Latvia, Lithuania and Estonia play in the “national team” of American satellites, guided primarily by the interests of the United States and not of a “united Europe”.

Finally, the military hysteria of the leadership of the Baltic countries does not meet the interests of most residents of the republics who want to live normally and not exist in conditions of military psychosis and constantly pumped Russophobia. After all, Lithuania, Latvia and Estonia are now trying to imagine themselves almost "advanced", flooding their territories with military facilities, foreign soldiers and forcing their small, not very belligerent in their mentality people to think in a militaristic spirit. 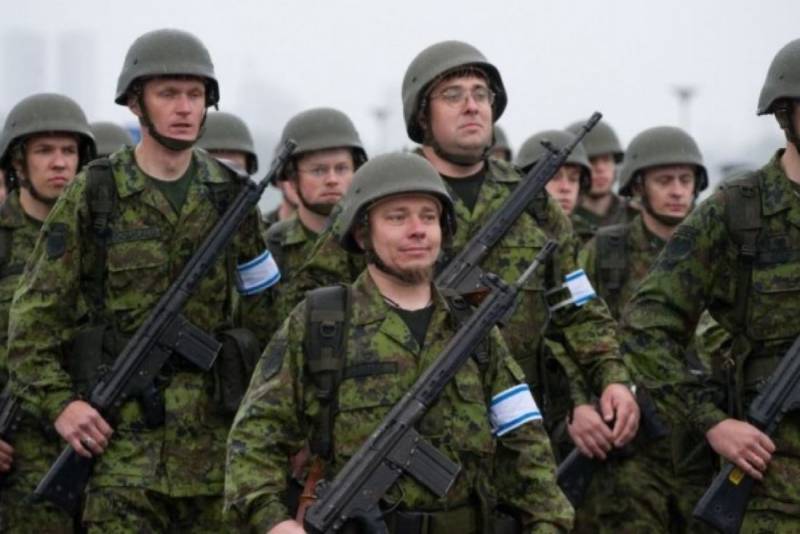 By the way, in the event of the outbreak of any armed conflict, the tiny republics will take the first blow, and the more NATO and American military facilities are in their territory, the more terrible this strike will be, but no military infrastructure will be able to escape from it.

Military experts believe that the large-scale armed conflict in eastern Europe for the Baltic states will simply become fatal. Lithuania, Latvia, Estonia do not have either territorial or demographic resources to survive such a conflict and maintain political sovereignty, and simply survive.

Therefore, the policy of the leadership of the Baltic countries is anti-people, directed against the interests of their own peoples and impedes the full development of Estonia, Latvia and Lithuania, which in the event of their political neutrality and demilitarization could receive much more preferences for further development.