October 17 2019
9
The Ripsaw tracked all-terrain vehicles from the American company Howe & Howe Technologies are well known to the public and are already in serial production. The development company is trying to re-attract the attention of the US Army, for which it has created a new version of the existing platform, designed for combat use. The modernized Ripsaw M5 all-terrain vehicle has become a robotic complex and can now solve a wide range of tasks. 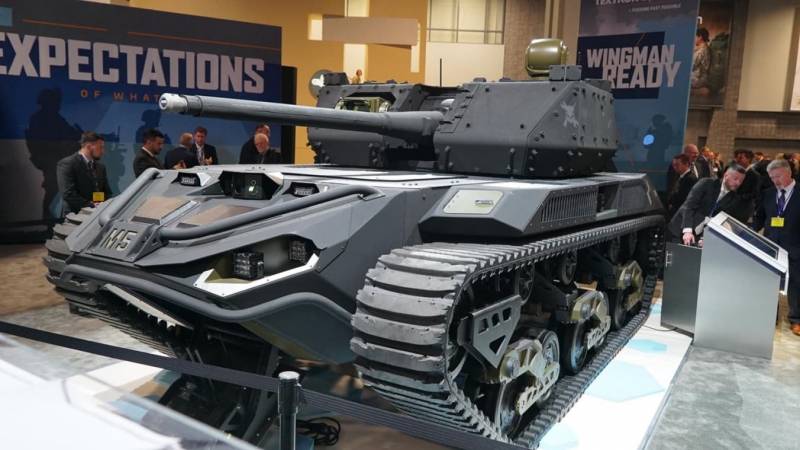 General view of the combat vehicle based on Ripsaw M5

All-terrain vehicle at the exhibition

The new project is the result of a collaborative effort between the two organizations that make up Textron. The tracked chassis was modernized by the developer Howe & Howe Technologies, and the surveillance equipment and other components were presented by FLIR Systems. 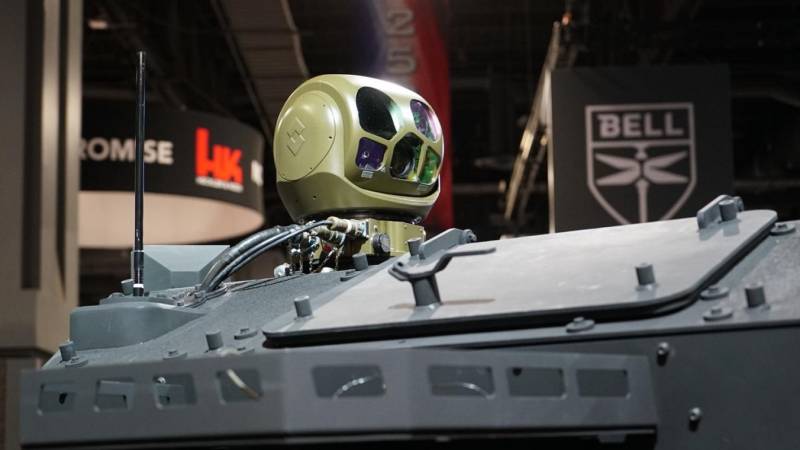 Optoelectronic device on the tower

The Ripsaw M5 is designed to participate in the US Army's Robotic Combat Vehicle program. The purpose of this program is to develop promising military-oriented RTKs with wide capabilities. At the same time, new equipment must be distinguished by limited cost and be built on the basis of existing components.

The RTK Ripsaw M5 is a lightweight and compact tracked vehicle with remote control. At its core, the M5 is a modernized version of previous all-terrain vehicles, modified in accordance with the requirements of the military. The shape of the case has been redesigned, protection has been added, and footprints for various equipment have been provided.

The layout of the machine has not undergone major changes: the engine and transmission are placed in the stern, while other volumes are given for other devices. The suspension has been seriously changed. Now on each side there are six road wheels, interlocked in pairs. Ripsaw previously had a spring suspension, but the M5 uses hydropneumatic. 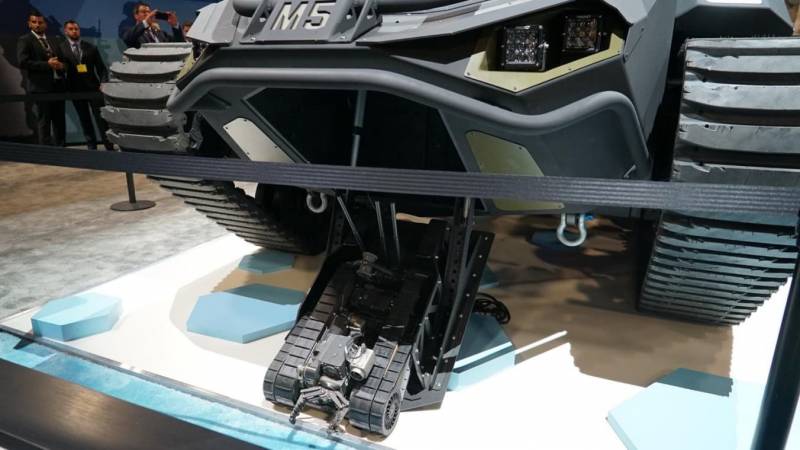 Despite significant redesign, the M5 retains high mobility characteristics. The platform is capable of carrying a load of various types with its modular architecture. The power supply of installed devices is provided. They are also included in the general control loops.

Around the perimeter of the Ripsaw M5 case is a set of video cameras, the signal from which is transmitted to the operator via a radio channel. It also provides signal transmission from installed surveillance or guidance weapons. Using his remote control, the operator can monitor the road and the situation, control the machine and its target equipment, etc. Two-way communication is via a secure radio channel. 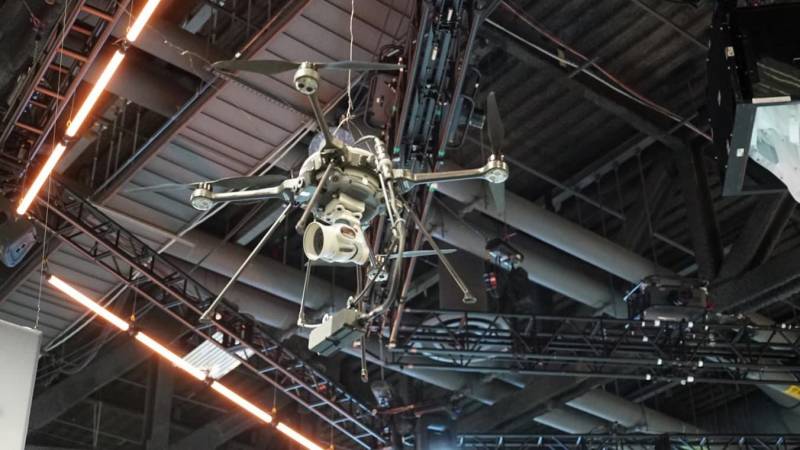 The operator console can be carried out in a portable version or mounted on any equipment. In the latter case, the concept of "robot-slave" is implemented: the crew of a manned combat vehicle can control the slave RTK and get the required benefits from this. The joint use of armored vehicles and RTK will provide a more effective solution to all major tasks.

M5 is capable of carrying different payloads. AUSA-2019 showed such a machine in the configuration of a light fire support facility. On the roof of the platform mounted remotely controlled combat module with artillery weapons. A small-caliber gun and a block of optoelectronic guidance equipment were installed on the forehead of the armored turret. The TacFLIR 280-HD optics unit with panoramic sight functions was placed on the roof of the tower. 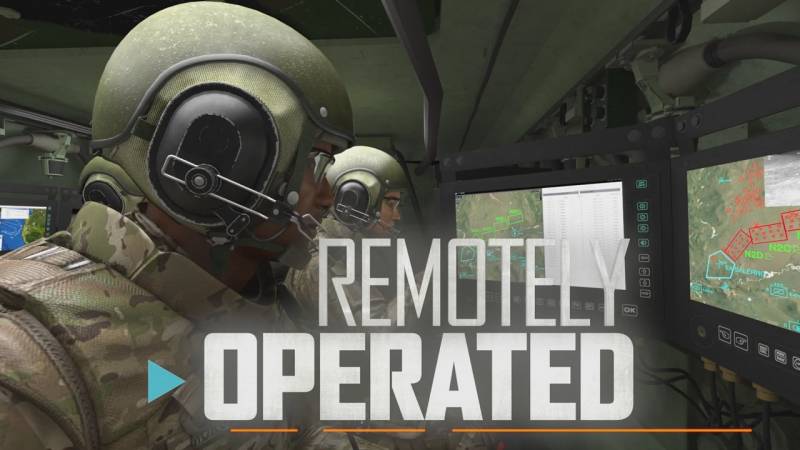 Aboard a command vehicle

Like the basic all-terrain vehicle, the M5 model's RTK is small and light. It shows high traffic in different areas, and is also suitable for transportation of military transport aviation. It can be transported in the cargo compartment of existing aircraft or on the external suspension of helicopters.

The M5 has a bow compartment with a hinged front wing-ramp. It carries a remotely controlled SUGV vehicle developed by FLIR Systems. The 31 kg robot is equipped with a high-cross-track tracked chassis, a manipulator and cameras. If necessary, this RTK is used for reconnaissance, manipulation of objects, etc. 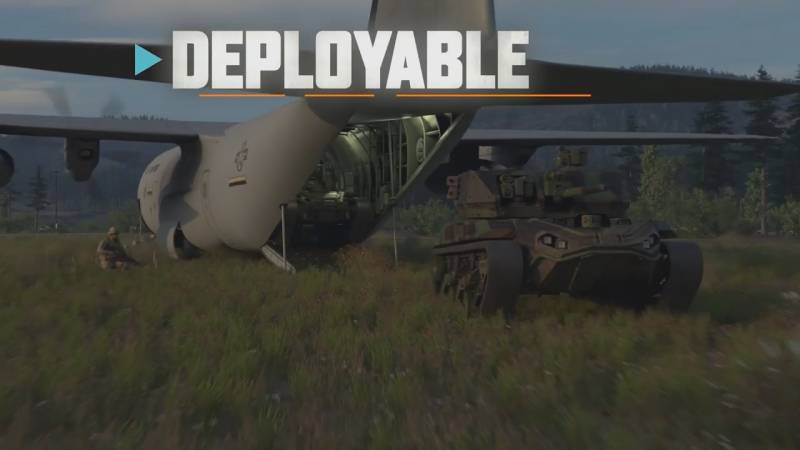 M5 can also carry an R80D SkyRaider quadrocopter drone with a video camera. Take-off and landing of UAVs are carried out from a small platform on the roof of the carrier. The drone is able to climb to a certain height and provide a better overview of the terrain. This can be useful in combat or reconnaissance.

In the commercial, they showed another version of the Ripsaw M5 with an UAV on board. Instead of a turret with weapons, it should carry a closed, protected platform for transporting and launching reconnaissance UAVs of the “Skyrader” type. For self-defense, such an RTK receives a DBM with machine gun and anti-tank missile weapons.

An alternative reconnaissance option was developed without the use of UAVs. Instead of a drone platform, such a robot carries a articulated boom lift with optoelectronic equipment. For reconnaissance, the optics unit rises to a certain height, including above the shelter of the machine and provides the necessary visibility. 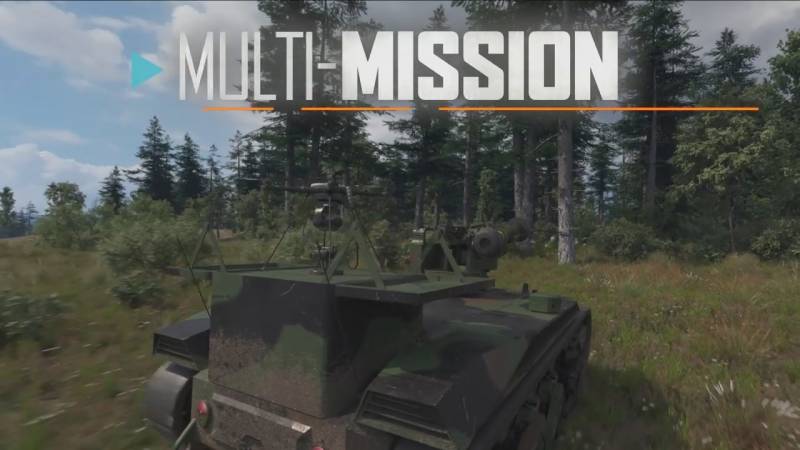 The Ripsaw M5 combat robot presented at the exhibition can solve the tasks of a combat reconnaissance vehicle, fire support equipment for infantry or armored vehicles, etc. The RTK can be taken to a hazardous area to carry out reconnaissance without risk to humans. Automatic gun will be an important argument when meeting with the enemy.

Modifications with different means of monitoring on board are intended only for reconnaissance, both in the interests of their unit and with the transfer of data to third-party consumers. 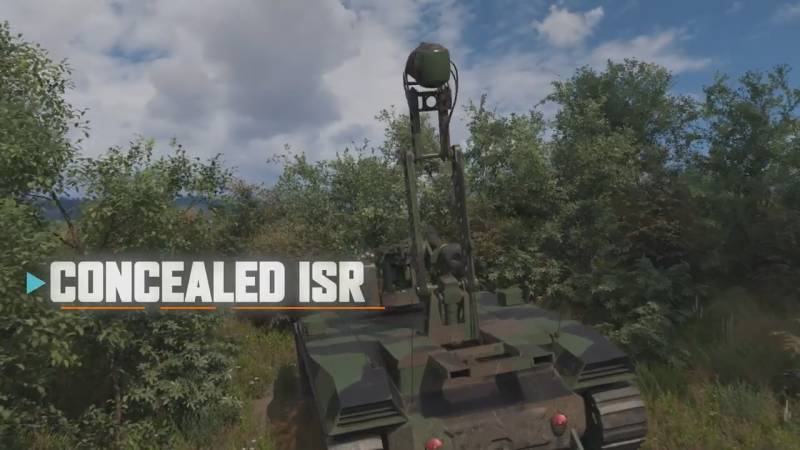 Unified RTKs for various purposes can be combined into groups and used together. Such a unit may be led by a manned vehicle carrying the necessary control panels. This will provide maximum flexibility in the use of robotic systems in the interests of the troops in all conditions. RTK groups will be useful both in low-intensity conflicts and in full-fledged combined arms battles.

However, while the main goal of the Ripsaw M5 project is to find customers. The Pentagon conducting the Robotic Combat Vehicle program is considered as the main one. In the near future, the military will have to consider the proposed technology projects and choose the best and appropriate to their requirements.

A key requirement in the RCV is the origin of the contestants. The army does not want to deal with projects that need long-term development and refinement. Only RTKs based on existing components are considered. This will speed up the testing and adoption process with understandable positive consequences for the army.

RTK Ripsaw M5 fully meets the requirements of the customer regarding the use of finished products. In the near future, he will have to prove compliance in other characteristics. The various stages of testing and testing within the RCV have already begun. Textron's M5 will join trials next year. Work will continue over the next few years. The final results of the program are expected in 2023.

Whether the Ripsaw M5 product will be able to win the competition and enter service is unknown. This RTK has high performance and is versatile in use. However, other equally interesting engineering projects of similar purpose are participating in RCV. It remains to wait for further events and monitor the news. Obviously, the Robotic Combat Vehicle program will be extremely interesting - regardless of winning or losing the Ripsaw M5.