The main mission of the stealth destroyers Zamvolt is named

October 14 2019
113
The destroyer USS Zumwalt (DDG-1000) is getting closer to the beginning of a full-fledged service and solving combat missions, writes American analyst Chris Osborne. Meanwhile, the US Navy is engaged in combat use of such a ship and is working out situations in which it will be most useful. The goals and objectives of the destroyer are expanding due to missions that previously received less attention. Perhaps Zamvolt will even be able to change the face of surface battles. 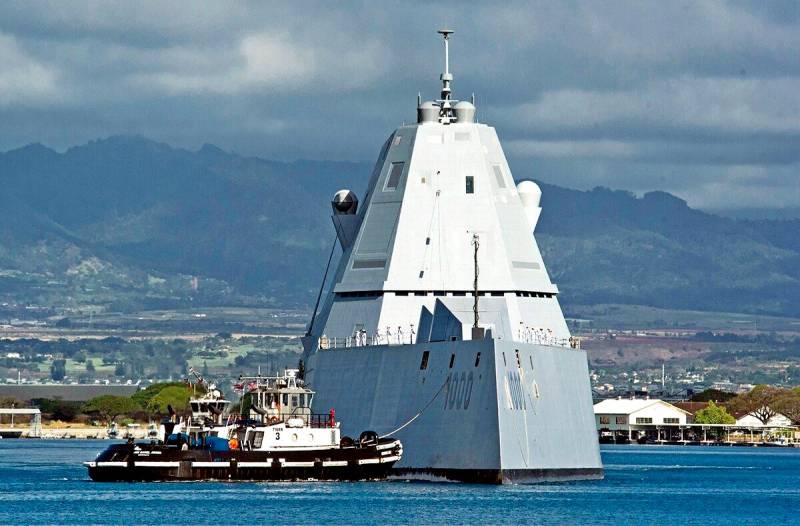 Initially, the stealth destroyer Zumwalt was created as a ship for delivering land strikes using rockets and artillery. Progress in the field of weapons and technology allows the Navy to talk about the effective use of the ship in battles with other surface ships. A number of characteristic features of the destroyer allows you to review its purpose and role in the composition fleet.

A new type of destroyer is stealth, which will allow him to covertly approach the enemy and strike. The stealth and other new technologies used in the three Zamvolty can be useful in the conflicts of the next years.

A promising strike would be the AGS artillery with Long Range Land Attack Projectile (LRLAP) shells. The latter are distinguished by increased firing range and the presence of guidance tools that increase the accuracy of fire.

The capabilities of Zumwalt ships can be expanded through the use of AWACS, reconnaissance helicopters or drones. With their help, the range of target detection for a subsequent attack using the latest weapons.

Ships of a new type may be included in carrier strike groups. Here, their capabilities will be useful for studying the positions of the enemy or for delivering a first strike. The ship will be able to act covertly, without giving out its AUG.


A destroyer with high-precision weapons and a set of reconnaissance assets can be involved in a landing operation. It will provide coast reconnaissance, transmit data to amphibious assault ships, identify dangerous objects and suppress enemy defenses. Effective work in the coastal zone will contribute to a small draft of the ship. In this regard, Zumwalt is comparable to the ships of the LCS series, but compares favorably with their greater firepower.

However, the US Navy will receive only three Zamvolta, which seriously limits their operational capabilities. But such ships can inspire future projects of warships and become a source of innovation for them, although promising examples so far are only a figment of the imagination.

In the context of the further development of ships and their armaments, combat lasers and ship-based rail guns are considered. Such weapons attract the attention of specialists and the public, and in theory can be used on ships. Zumwalt destroyers have a special power plant designed to supply powerful consumers. She is able to work with fundamentally new types of weapons. 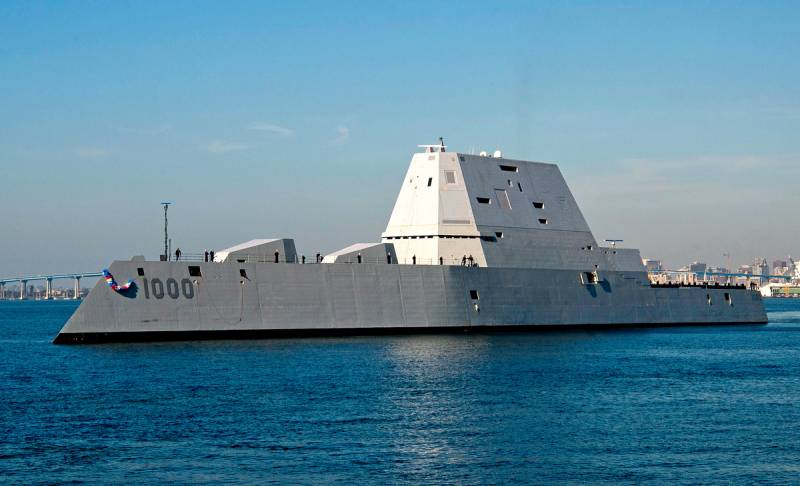 Shipborne combat lasers have already reached the test stage and will be put into practice in the future. The main work in this direction is associated with increasing range and power. The integration of lasers with radars and other sensors is also being carried out, as well as their inclusion in general fire control systems.

From the “VO” side, we note that not all plans and desires can be fulfilled. So, stealth destroyers Zumwalt can not yet use the artillery mounts AGS. A few years ago, the U.S. Navy abandoned the LRLAP shell because of its unacceptable cost, and other ammunition for the AGS is not yet available. In addition, the refinement process of the overly complex lead ship is again delayed. Due to problems with weapons and electronics, the achievement of full operational readiness was recently postponed to the second quarter of next year.

Thus, all plans and evaluations are again confronted with harsh reality - and the newest destroyer cannot yet fulfill its mission, whatever it may be.