How was born "Poseidon"

October 16 2019
112
If the "Poseidon" is so far only a model suitable only for towing trials, which is still far from being ready weaponsthen what experienced? The Ministry of Defense of the Russian Federation showed a very short movie of some tests, on which there were footage of launching a certain product from a certain device, which in this article will be considered in more detail. They, in my opinion, are worth it. 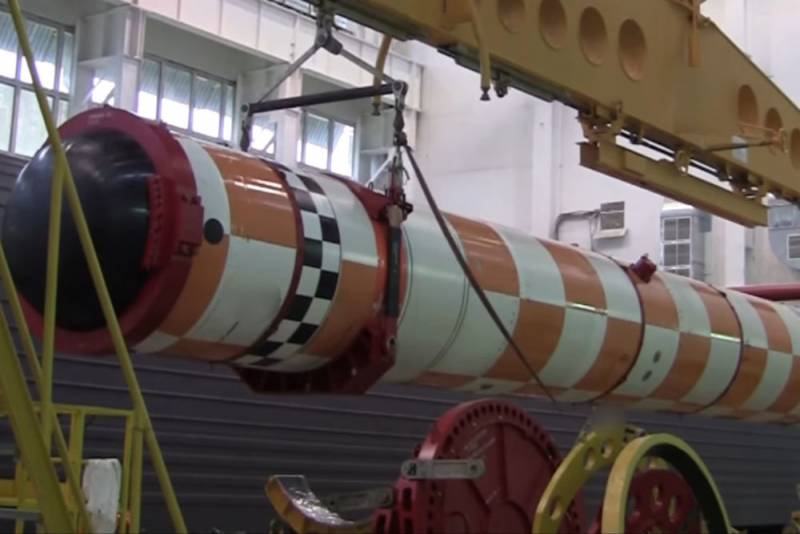 Once again, we give a well-known photograph of a product hanging on a traverse

Yet this is a container

In the comments under the previous article, there was a discussion about my assertion that a product painted in a white and orange cage, imprinted on a specially designed traverse, is a transport and launch container. My opponent claimed that it was not a container, but a product for "throwing tests."

I disagree with my opponent and that’s why. Firstly, this product, as can be seen in the photo, has no screws and rudders, without which no underwater vehicle can sail anywhere. Yes, I am aware of the Flurry rocket torpedo, which has no screws, well, after all, no one has claimed that the Poseidon is a rocket torpedo. In addition, a certain end cover is visible in the rear of this product, which most of all suggests thoughts about the container.

Secondly, in the bow you can see a certain red ring separating the black fairing and the rest of the body of the product. The purpose of this product is not entirely clear, but it can be assumed that this black fairing is fixed. This ring is also not part of the product sling system, since nothing is attached to it, either hoists or hooks. In any case, such a ring cannot be installed on a product intended for underwater travel - it would have greatly worsened the streamlining. All torpedoes have a streamlined shape of the warhead, which is quite obvious.

Now let's move on to the video published by the Ministry of Defense. I took a few shots of the start recording. 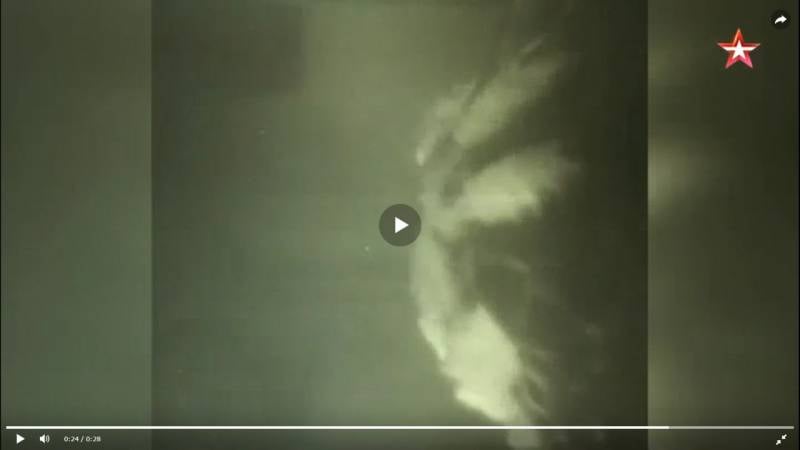 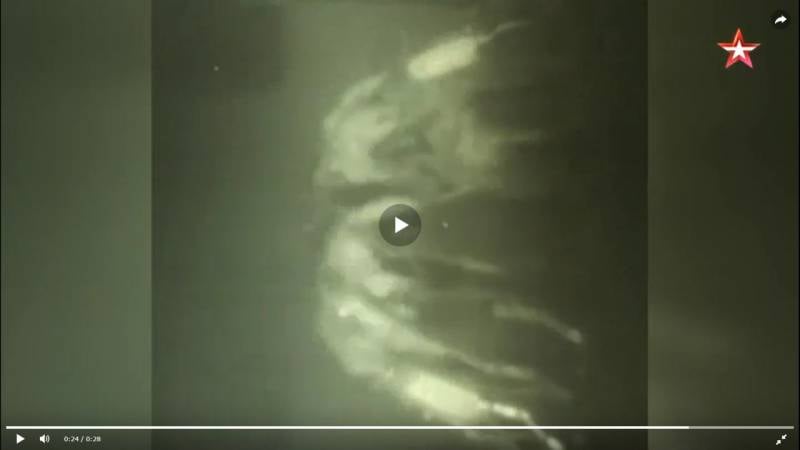 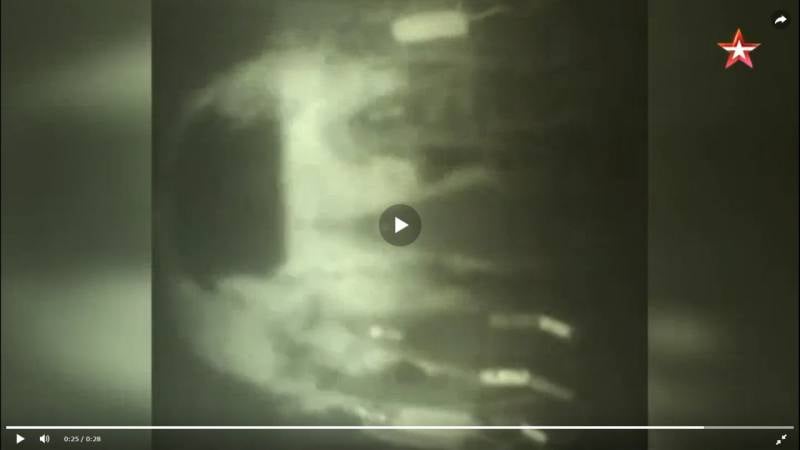 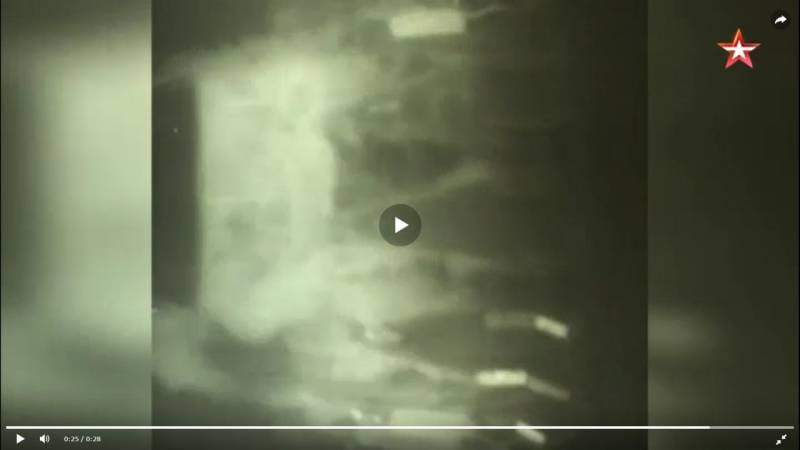 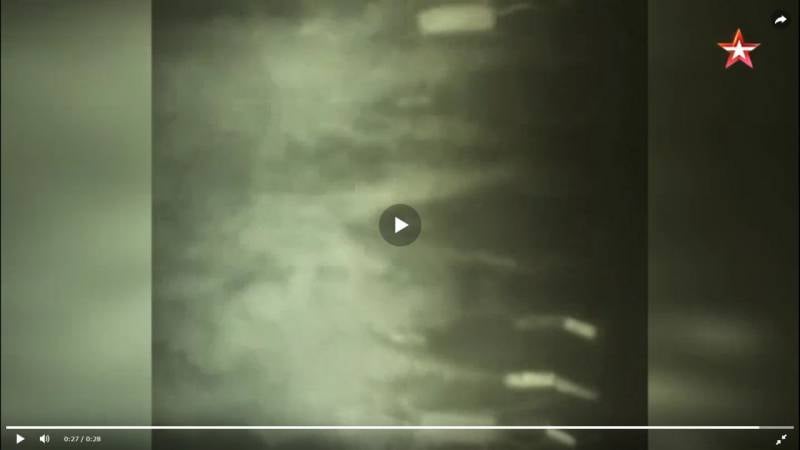 A hemispherical lid is visible on them (very similar in shape to a black fairing of a product suspended on a beam), which opens with petals under the pressure of gases, and a torpedo passes through these petals. You can notice the dark stripes, extended in length and not at all similar to the white-orange color of the product discussed above.

In general, I think that the hemispherical drop-down lid is a black fairing of the launch vehicle, from which a torpedo was fired during tests. This cover opened almost the same as the rubber cover of a disposable grenade launcher; it is probably also rubber or rubber-metal. The video was shot in order to make sure that the lid opens normally and the torpedo leaves the container without any difficulties.

If someone does not agree with this interpretation, he can put forward his version, but so that it does not diverge from the observed facts.

What kind of torpedo was fired from the transport and launch container and why was it necessary to make a container for the torpedo? Is there really not enough torpedo tubes? I think that it was the 65-76 torpedo, which, according to official figures, played a key role in the death of the Kursk submarine K-141.

According to the results of the investigation, based on the study of the remains of the boat in the dock, it was concluded that the boat died from the explosion of a torpedo ammunition stored in the first compartment. Investigators saw a picture of monstrous destruction: the bulkheads torn and pressed together, bent pull-out devices, a mishmash of debris. The hull of the boat was mangled along its entire length, so that the coamings of the aft emergency rescue hatch burst. The hatch itself was jammed and was pulled out by a robot arm. Survivors of the explosion were doomed; they could not open the hatch in any way. Personally, I was struck by the photo of the payola in the ruined nose compartment, in which there were good 20 mm steel and which was crumpled into the corrugation like foil. It was an unimaginably powerful explosion. 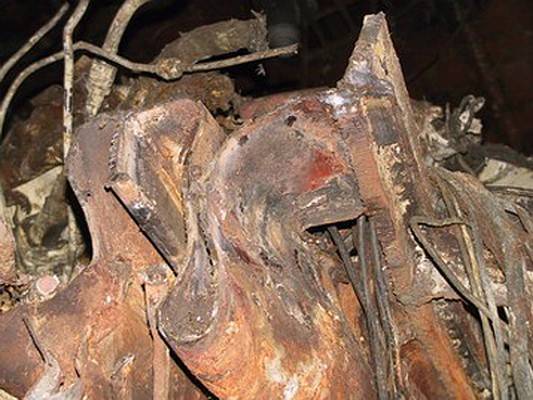 The investigation showed that the launch of the disaster was the explosion of the 65-76 torpedo in the torpedo tube. Apparently, there was a leak of hydrogen peroxide. He decomposed with an explosion. A gas-vapor mixture of water and oxygen heated to several hundred degrees (from 500 to 800 degrees) destroyed the torpedo itself, as a result of which the rest of the hydrogen peroxide in the dashboard decomposed. A powerful explosion knocked out the front cover of the torpedo tube (it was later found at the bottom); the rear cover of the torpedo tube flew through the entire compartment and stuck into the bulkhead between the first and second compartments. Hot gas mixed with kerosene (the 65-76 torpedo uses kerosene as fuel) burst into the compartment. In fact, it was a flamethrower jet that ignited everything that could burn, and a powerful volumetric fire arose, fueled by the oxygen of the combined cycle gas. At the same time, water poured through the ruined compartment. The combination of a powerful fire and flooding of the compartment caused a rapid increase in temperature and pressure, which is why explosives in all other torpedoes exploded. The catastrophe can be described something like this. 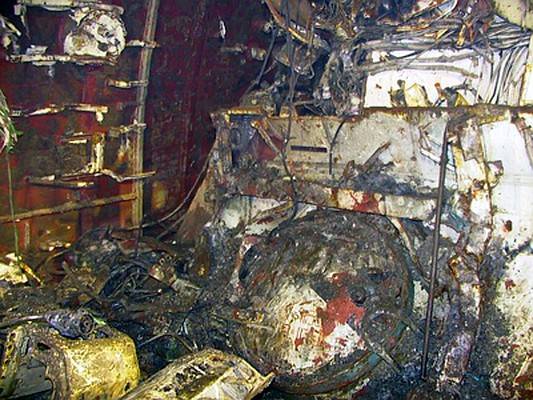 After the death of the Kursk, the 65-76 torpedo was withdrawn from service. This decision was understandable and justified. But the bad. This torpedo was the best of all that was in the torpedo arsenal of the Russian Navy. It had good speed, range, homing system, and such a torpedo could attack large surface ships of the enemy, including aircraft carriers, with decent chances of success. It was impossible to use it as before, but there was nothing to replace it with.

Based on these considerations, I believe that the command of the Navy came up with the idea to abandon the 65-76 torpedo from a torpedo launcher, and to develop a special transport and launch container for it located outside the solid hull of the submarine. In this case, if the torpedo leaks and even explodes, the possible damage will be much less than if it exploded in a torpedo tube, and probably will not lead to the loss of a combat unit, as happened with the Kursk. If the front cover of the container is opened by steam pressure and the back cover is strong, then the explosion of hydrogen peroxide is most likely to lead to an emergency torpedo shot.

Despite the obviousness of the idea and the similarity of the torpedo container with the container for the cruise missile, it is still not so simple to make it. The container must be operational at any depth of immersion, up to the limit, it must ensure the launch of a torpedo on the move, launch from it should not damage the hull of the boat and so on. There are many requirements for it. Therefore, it was a difficult task requiring research, development and testing. Coloring the container in white-orange squares, obviously, was required to study the hydrodynamic effects that occur when launching a torpedo. The shooting, of course, was conducted from all angles, but we were shown only a small part of these records.

As far as one can judge, the trials were successful.

The Birth of Poseidon

This circumstance, as can be assumed, led to the birth of the concept of "Poseidon." Once torpedoes climbed out of a sturdy hull, their caliber limitation is lifted. You can build a much larger torpedo.

The photos of a certain product in the workshop, which were analyzed in the previous article, are obviously the photos of the layout of this new, promising large-caliber torpedo. Commentators drew attention to the steps of the stairs behind the torpedo and even indicated the step of the steps - about 30 cm. Using this scale, you can evaluate the diameter of the product. I got 250 cm. That is, it is 3,8 times larger in diameter than the 65-76 torpedo.

If you equip it with a proven engine using kerosene and hydrogen peroxide, you can achieve a significant increase in its range by increasing the supply of fuel and oxidizer. The torpedo 65-76 had a range of up to 100 km, and here, probably, it will be three times as much.

A large case can accommodate a much larger explosive charge. The charge of the torpedo 65-76 was impressive - 765 kg of TNT. In a large torpedo, it can be 2-3 tons. That is, the carrier will dispose of the belly almost guaranteed. In addition, a large torpedo itself can be a carrier of torpedoes, for example, the same torpedoes "Flurry". At least one such torpedo can be installed. A carrier torpedo can attack two targets: one with a Flurry, for example, a destroyer or a submarine, and the second with its own charge. This is technically feasible.

Not to mention options with a nuclear reactor and a nuclear warhead.

If all this is true, then the compelled decision to place a hazardous, but necessary torpedo out of the sturdy hull of the boat led to new opportunities that did not exist before. A new class of naval weapons can be created, unprecedentedly powerful and long-range. These are only prospects going through the stage of development and the first samples. As for the transport and launch container for the 65-76 torpedo, it is likely that without much noise it will soon be put into service, since installing them on existing boats will not require significant changes in their design.