October 12 2019
76
Small rocket ship "Sovetsk" project 22800 cipher Karakurt became part of the Naval fleet Of Russia. The ceremony of raising the naval flag was held in Baltiysk, Kaliningrad region. This was reported at the headquarters of the Western Military District. 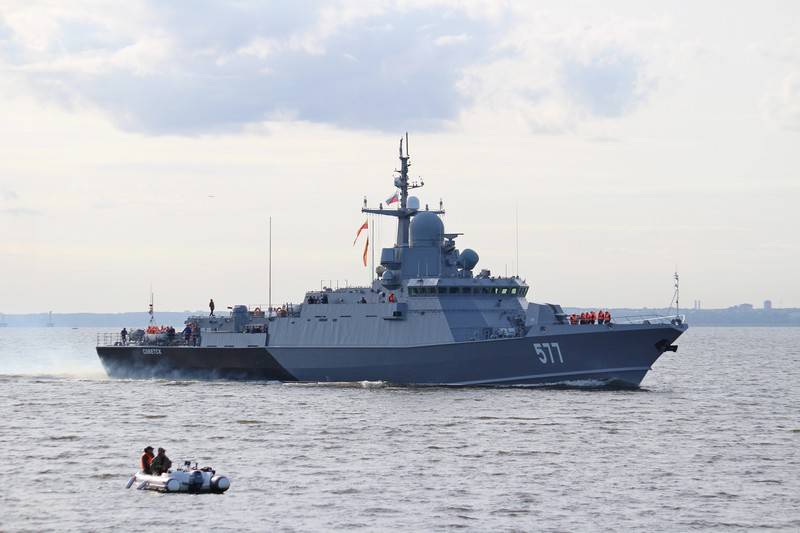 RTO Sovetsk (formerly Typhoon) was laid on the Pella Shipyard on December 24 of the year 2015 simultaneously with the head RTO Mytishchi (formerly Hurricane). The lead ship was launched on 29 on July 2017 of the year, and Sovetsk RTO on November 24 of 2017 of the year. Now both ships will serve together.

Currently, two more RTOs of this project are under construction at the Pella CVC: Squall (renamed Odintsovo) laid / launched on July 29 2016 / 5 in May 2018 of the year and Storm was laid / launched on December 24 2016 / 23 October 2018, respectively. At the same time, at the SSZ “More” in Feodosia under the contract for the construction of seven ships concluded with “Pella”, three MRCs are under construction: “Storm” (renamed to “Kozelsk”), “Okhotsk” and “Whirlwind”.

On August 5 of 2016 of the year, the Ministry of Defense signed a contract for the construction of five more missile defense systems of the 22800 project with JSC Zelenodolsk Plant named after A.M. Gorky (Zelenodolsk). The order was distributed between Zelenodolsk and the Gulf Shipyard in Kerch, on which the Cyclone RTOs (26 of July 2016 of the year) and Monsoon (Askold) were laid, laid on 18 of November 2016 of the year and Passat (Amur) , laid 30 July 2017 year). In Zelenodolsk, the bookmark of RTO Tucha passed 26 on February 2019 of the year, and RTO Typhoon went on 11 on September 2019 of the year.

In August 2018, the Ministry of Defense signed contracts for the construction of six more RTOs for the Pacific Fleet. Four of them will be built at Amur Shipbuilding Plant JSC (Komsomolsk-on-Amur) with 2026 delivery in year, and two ships at Vostochnaya Verf JSC (Vladivostok) with delivery at 2023 year. In Komsomolsk-on-Amur, July 1 laid two RTOs - "Rzhev" and "Udomlya".