October 12 2019
139
Like everyone, India wants the best technology that can afford. For various reasons, it excludes the purchase of American and European products, which is in the hands of Russia. Over the past half century, India regularly buys Russian weapon, but the implementation of contracts is associated with delays and cost overruns. 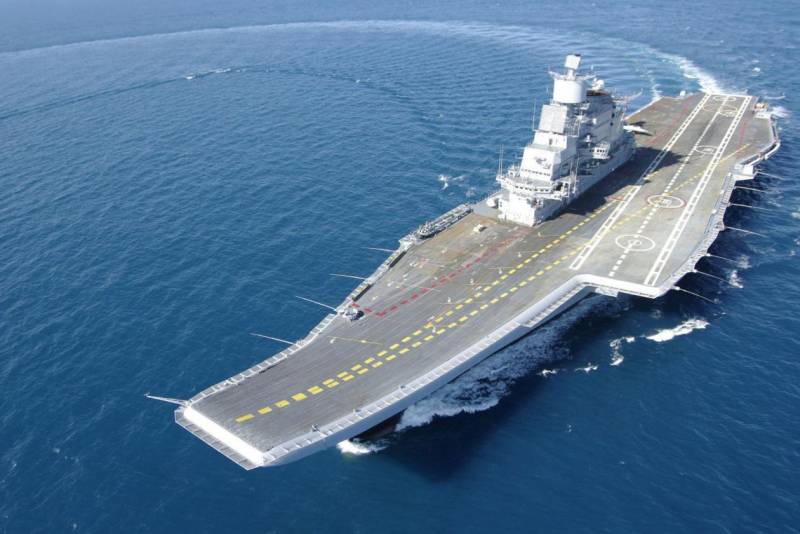 Most famous history this is the purchase of the Vikramaditya aircraft carrier. At the beginning of the two thousandths, the Indian fleet wished to buy an aircraft carrier - and this began a long and unpleasant story.

The Soviet aircraft carrier “Baku” was commissioned in 1988. It was the only ship of the 1143.4 ave. He carried Granit rockets, artillery, and dozens of aircraft. After the collapse of the USSR, independent Russia renamed the ship Admiral Gorshkov. At the very beginning of 1992, an accident occurred on the steam line, and the ship had to be put in reserve.

At the beginning of the two thousandths in New Delhi, they thought about buying an aircraft carrier. The only available Viraat ship should have been decommissioned a few years later, and there was no replacement for it. In 2004, a Russian-Indian contract appeared. According to him, the “Admiral Gorshkov” was transferred free of charge to the Indian Navy, but before that Russia had to carry out modernization worth 974 million dollars.

Russia rebuilt the ship with a corner deck, adding a bow diving board. Installed new boilers, new electronics, equipment for working with aviation etc. 2700 cabins and rooms were renovated. The ship with the new name "Vikramaditya" now could carry 24 MiG-29K fighters and 10 Ka-brand helicopters.

Problems began in 2007. A year later, the transfer of the aircraft carrier to the customer was expected, but the Sevmash plant did not fit into these deadlines. Worse, the cost of work rose to 2,9 billion dollars, and the customer was offered to pay extra. In case of failure, the Russian Ministry of Defense threatened to take the ship to itself, which did not suit India, which had already paid 974 million. By this time approx. 50% of works.

In July 2009, Russian President D. Medvedev arrived at Sevmash. He criticized the course of modernization and demanded to complete the work as soon as possible, and then transfer the aircraft carrier to Indian partners. The following year, India agreed to increase the project budget to 2,2 billion dollars, and work began with renewed vigor.

In August 2012, the Vikramaditya was put to the test, and in November 2013, it entered the Indian Navy. Surprisingly, even after all the unpleasant events, India signed a contract with Sevmash to service the aircraft carrier for 20 years. In addition, the plant was ordered the necessary spare parts and other equipment.

Operating an aircraft carrier, India has already faced serious problems. In 2012, during the transition from Russia to India, one of eight boilers broke down. The Russian side called the cause of the accident low-quality refractory brick made in China. China, in turn, has denied the fact of the supply of bricks for the Russian-Indian project.

Arms problems remain. Air defense of the ship is provided only by launching devices of false targets, capable of distracting anti-ship missiles. Short-range firepower is simply not available. India is able to equip Vikramaditya with its own copies of AK-630 installations, but this will happen no earlier than in a few years. Until then, the ship will have to rely on anti-aircraft weapons of other combat units - such as the latest destroyer Kolkata.

After the not very successful modernization of Admiral Gorshkov, the Sevmash plant shows strange optimism. He is going to build new aircraft carriers, including for third countries. A possible buyer of such a ship is already called Brazil.

On the VO side, we note that the construction of the Vikramaditya aircraft carrier was indeed long and difficult. Due to the extremely poor condition of Admiral Gorshkov, most of the structures had to be rebuilt and saturated with new equipment. This is what led to the delay of work and the increase in cost.

The problem was the refinement of the original project, related to the wishes of the customer and the specifics of production. So, the unfortunate brick on the boilers appeared due to the Indians' refusal to install asbestos insulation. There have been problems with imported components. The fact that earlier Sevmash did not deal with the topic of aircraft carriers had a great influence on the work. All such ships for the USSR Navy were built in Nikolaev.

As for complaints, the Indian military is known for its stories of poor-quality imported equipment. Often, such criticism turns out to be true, but pretty exaggerated.