Why did Turkey start a military operation in Syria

October 10 2019
89
Turkish President Recep Erdogan officially announced the start of a military operation in northern Syria. At the same time, Turkish aircraft attacked the positions of the Syrian Kurds from the air, artillery began shelling the border areas, and Tanks, armored personnel carriers, trucks with personnel of the Turkish ground forces crossed the Turkish-Syrian border. 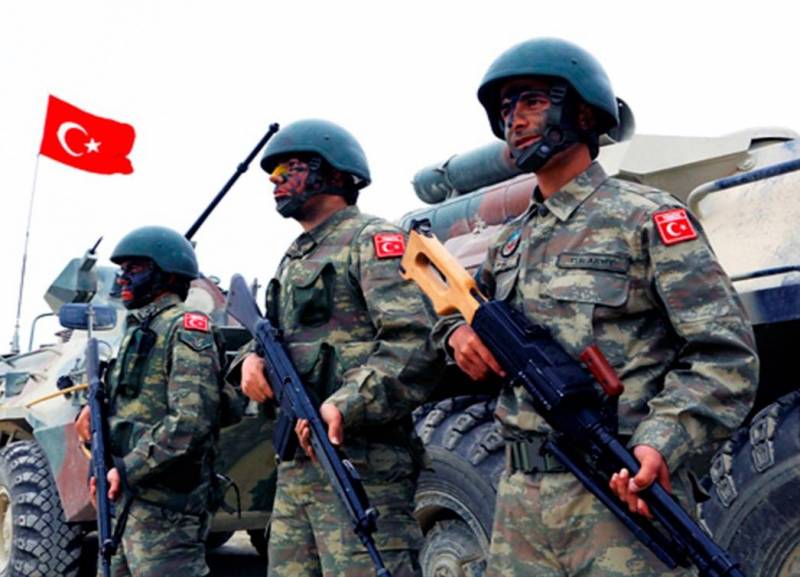 The main goal of the operation

Ankara emphasizes that the operation in northern Syria aims to create a security zone - a thirty-kilometer strip, on which it is planned to place up to 2 of millions of Syrian refugee citizens who migrated to Turkey during the war. In addition, the Turks need a security zone in order to protect their country with a similar buffer from flaming Syria.

The operation should neutralize terrorist threats against Turkey and allow creating a safe zone, which will facilitate the return of Syrian refugees,
- Erdogan wrote on his Twitter page. 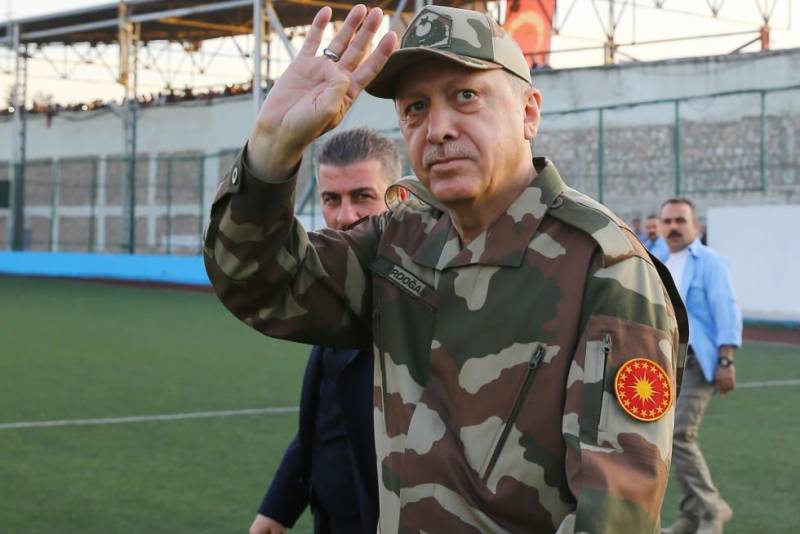 The name of the operation - "The Source of the World" - impresses with its hypocrisy. After all, it is already known about the first victims of Turkish shelling among the civilian population. And these victims will be even greater, given that the Kurds are a united and militarized people and now everyone, down to women and adolescents, will defend their land from Turkish troops invading it.

But in fact, not so much a security zone as the Syrian Kurds are the true purpose of Ankara’s operation. The Turkish leadership has always with deepest hatred for the Kurdish national movement, both in Turkey itself and abroad. As you know, until recently, Ankara even refused Turkish Kurds to recognize their national identity, trying in every possible way to dissolve the Kurds in the Turkish environment, to assimilate them.

Erdogan considers the Kurdistan Workers' Party the main internal enemy of Turkey, which Ankara invariably evaluates as a terrorist organization, although even the Americans withdrew this "status" from the PKK. The Syrian Kurds in Ankara are considered as being under the control of the PKK, in fact, as its reserve, and even well armed and having combat experience.

Therefore, the existence of Kurdish territory uncontrolled by Damascus on the border with Turkey is associated with numerous risks in Ankara. Kurdish autonomy and, moreover, an independent Kurdish state in Syria is a source weapons and militants for the radicals in Turkish Kurdistan itself, this is a “bad example” for Turkish Kurds (and why are they, in fact, worse than their Syrian brothers, who cannot count on autonomy).

Thus, by no means creating a security zone, but striking at Kurdish formations is the main goal of the Turkish military operation in northern Syria. Taking advantage of the withdrawal of American troops from areas controlled by the Kurds, Erdogan finally decided to crack down on the Kurdish autonomy that he hated, which, incidentally, official Damascus does not recognize. 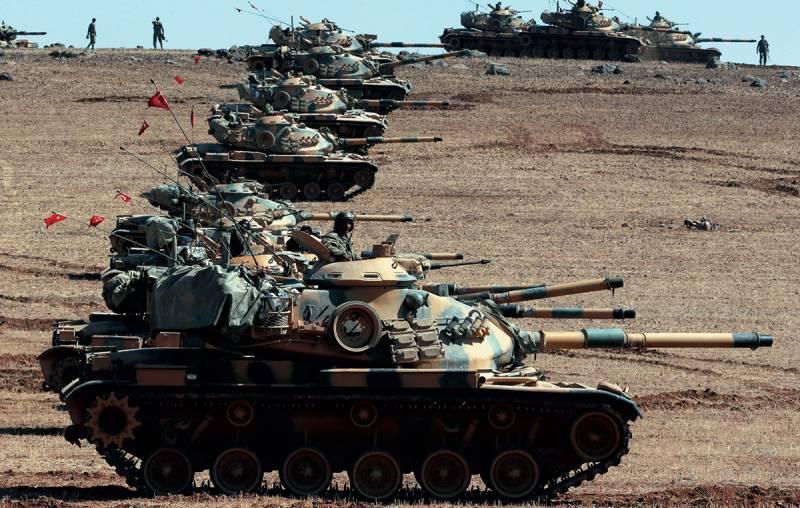 Immediately after Recep Erdogan officially announced the start of the operation in Syria, the Turkish Air Force launched two series of air strikes at the bases of Kurdish forces in Ras al-Ain, Tall Abyad and several other settlements. Then artillery began shelling Syrian territory, hitting at least 16 targets in a neighboring country.

The Kurds, unlike the Syrian government troops, do not have air defense systems, air forces. Therefore, before the blows of the Turkish aviation and artillery, Self-Defense Forces and Syrian Democratic Forces were defenseless. And this despite the fact that the military prowess of Kurdish fighters does not cause any doubt.

But air strikes and artillery were followed by the introduction of Turkish ground forces. The war with the Kurds on earth promises to be long and bloody, unless, of course, Erdogan changes his mind and reverses. The Turkish army is well armed and trained, but the Kurdish formations are manned by people who for many years fought every day with ISIS terrorists (banned in Russia) and with government forces.

In addition, the Kurdish formations are pretty well armed, since the United States took care of the arming and training of the Self-Defense Forces and the Syrian Democratic Forces at one time. It was the United States that was the main patron of the Kurds in northern Syria, which was another annoying factor for Ankara.

Despite disputes over the supply of Russian C-400 to Turkey, the country continues its membership in the North Atlantic Alliance and, accordingly, is the US military-political ally. True, Washington refused to participate in the Turkish operation in northern Syria, but did everything possible for Turkey — withdrew its troops located in Kurdish-controlled territories.

The weak spots of the Kurds are the Arab formations - this is up to 30% of all the troops of the Syrian democratic forces. Arabs are less trained and less motivated to resist the Turks and this is well known in Ankara. Therefore, the Turkish army and the beginning of the attack of Syrian Kurdistan with attacks on positions controlled by the Arab troops of the Syrian democratic forces.

Now the Kurds are cursing Donald Trump in betrayal. The American president, who yesterday was an ally and patron of the Kurdish national movement, turned into his traitor. Although Trump himself attacked Turkey with threats to destroy its economy and scattered compliments on the Kurdish people, everyone understands that words are words and deeds are deeds. And Washington’s actions speak for themselves - American troops were withdrawn from the Kurdish regions, which made it possible for Turkey to organize a military operation. After all, if the Americans had remained in the Kurdish regions, Erdogan would never have decided to conduct an operation.

Now the Kurds have to rely on their own strengths and the support of the world community. In the territories controlled by the Syrian Kurds, a general mobilization was announced to repulse Turkish aggression. The autonomous administration of the territories of northeastern Syria appealed to the Kurds and to all the national communities of the region with a call to defend their homeland from the advancing Turkish army. In addition, the autonomous administration is also asking for help from the world community, speaking of a humanitarian catastrophe that will inevitably follow the Turkish operation in Syria. 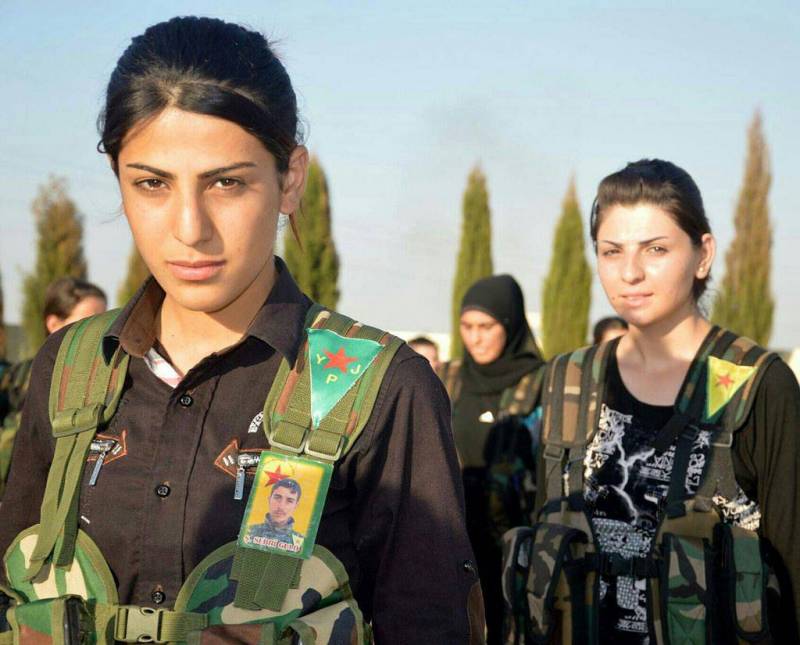 In fact, the Kurds have only one way out of this situation - to turn to the Syrian government in Damascus, behind which Moscow and Tehran stand. The leaders of Kurdish formations themselves already envisage a similar development of events, emphasizing the possibility of starting a dialogue with Bashar al-Assad and his representatives. In this case, the aggression of the Turkish army against the Syrian Kurds can be seen as an attack on sovereign Syria.

It is possible that the Trump administration pursued precisely such goals, hoping to quarrel Ankara with Moscow and Tehran and hoping to destroy the fragile balance of forces that has developed in the Middle East over the past time, as a result of negotiations between Turkey, Iran and Russia.

Another way out is a guerrilla war, which will drag on for a very long time, since northern Syria is full of weapons, many people with combat experience, and most importantly, over the years of the Kurdish autonomy, people are already accustomed to living in their own, albeit unrecognized state, according to their laws and rules, and to be in the occupation zone controlled by Turkish soldiers, they have no desire.

The European community will definitely be on the side of the Kurds, whom the left European community has long been sympathetic to. Even volunteers from European countries are fighting in Kurdish formations in Syria. But, of course, the EU will not take any serious action against Ankara, it will confine itself to declarations of protest. 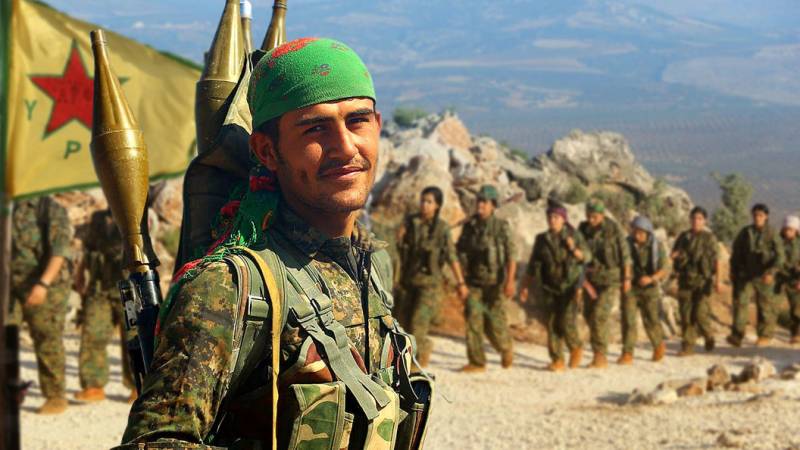 Moscow immediately took a position of non-interference, although it criticized the actions of Ankara. Gone are the days when Russia was considered one of the key patrons of the Kurdish national movement in the Middle East. Vladimir Putin finally decided on foreign policy priorities, developing contacts with Recep Erdogan. Even the death of the Russian pilot Ankara was forgiven, but not only forgiven, but then they signed and executed the contract for the supply of C-400.

Of course, in words, Russia will now criticize Turkish actions in Syria. But according to the rhetoric used by the country's leaders, the pro-government media, it is clear that Kurdish formations in Moscow are not sympathetic. And this is sad, but understandable - for Russia, relations with Turkey and official Damascus are more important than support for the Kurds, even if in fairness they have every right to create their own state.

Kurds are more than forty million people in the Near and Middle East, whose representatives, incidentally, live in Russia. We will not go into discussions about whether an independent Kurdish state should or should not appear on the world map, but in this situation, the interests of the Kurds cannot be ignored.

The ideal behavior for Russia would be mediation in the ongoing conflict with pressure on Ankara to end the operation. It is no secret that the Kurds made a huge contribution to the fight against ISIS (banned in Russia) in northern Syria. As for the choice by the Kurds of the Americans as allies and patrons, so what was left to do in the situation when three forces had to confront at once - the terrorists, the Syrian government forces of Bashar Assad and neighboring Turkey?

Russia benefits from "pacification" of the Kurds and their return under the rule of Damascus. But one must understand that after such an experience of the existence of Kurdish autonomy, the situation will never be the same. The Kurds sooner or later, but will have their own independent state. And Russia has absolutely no reason to sign up for its original opponents. Moreover, Turkey has never been and never will be a true friend of our country, especially if it begins to strengthen and claim a more significant role in world politics.

The Kurds themselves now have the opportunity to see for themselves that the Americans are an unreliable ally, who at the most crucial moment threw them "to eat" Turkey with its powerful and well-armed army. And this, by the way, is a good warning to all countries and forces counting on American support. They will not sacrifice their people, invest big money in “alien” wars for the sake of other countries and peoples in the United States.