One of a kind

GAZ-66 turned out okay and versatile machine. The eight-cylinder engine provided high power-to-weight ratio, self-locking differentials coupled with perfect weight distribution and geometric cross-country allowed to storm the craziest obstacles, and the hoodless layout provided excellent visibility. Actually, there were only three drawbacks: high fuel consumption, mocking for the driver the placement of the gearshift lever and the location of the crew seats directly above the front wheels. And if they were ready to put up with the first two drawbacks in the army, then the third drawback became almost fatal for Shishigi. Awareness of this came in Afghanistan, when the detonation of any mine under the wheels of a truck inevitably led to injuries and sometimes fatal injuries to the driver. Therefore, the GAZ-66 was hastily withdrawn from the limited contingent of Soviet troops and since then it has been rather cool about the combat use of the machine. 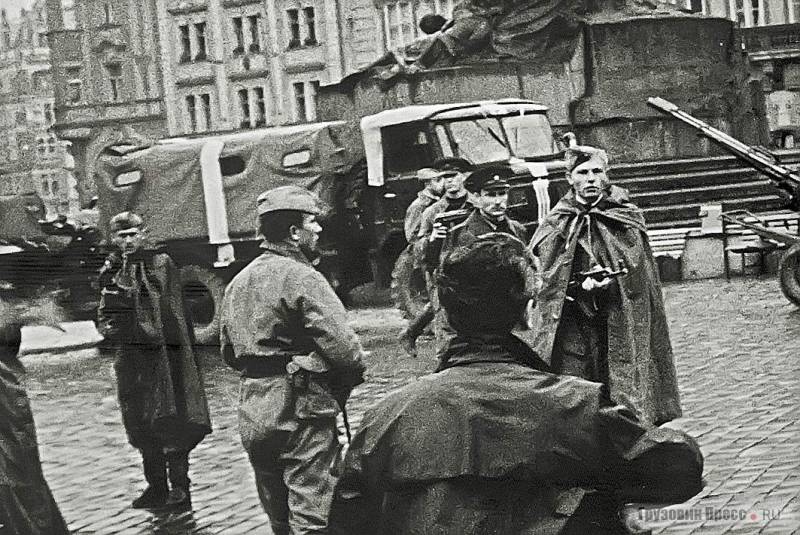 One of the episodes of the early combat use of the GAZ-66 in the modification of B. Prague. 21.08.1968 g. On the cab and the tent of the car there are identification white strips of machinery of the Warsaw Pact countries. Something similar we will see many years later in Ukraine

Although, of course, no one was in a hurry to write off the Shishig from the military service - there was simply nothing to replace the truck in the 80-90's. Incidentally, this was used by the design bureau of the Gorky Automobile Plant and was in no hurry with deep modernization. With all due respect to the engineering headquarters of GAZ, look at the evolution of the German Unimog S-series (which was largely a prototype of "shishigi"). In many respects, of course, this was due to the conservatism of the main customer in the person of the Ministry of Defense, but GAZ-66 was widely used for civilian needs and just then regular modernization would be very appropriate. The first time the GAZ-66 truck was updated several years after it was launched into production - in the 1968 year. 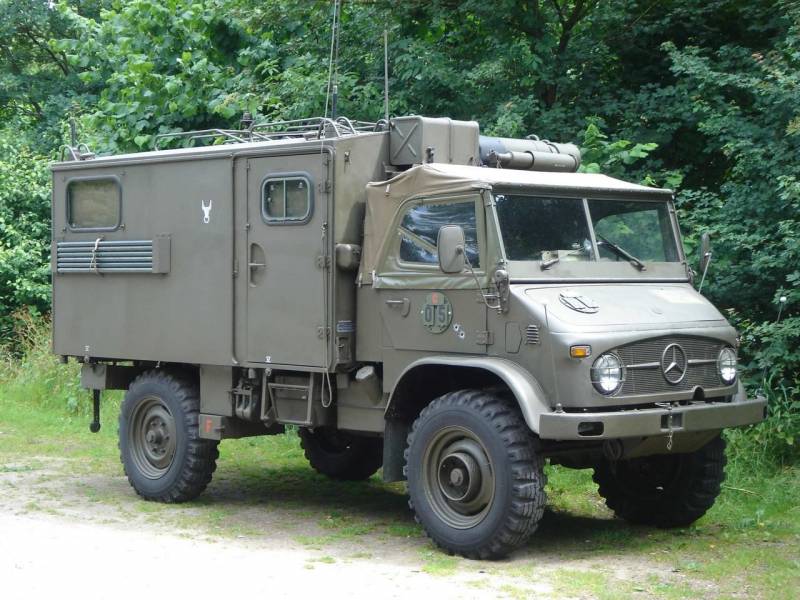 Unimog S series. Many consider it an object of imitation in the design of the GAZ-66

This was the second generation that lasted on the assembly line for as many as 17 years. Then two-number indices appeared, for example, the base version was 66-01. Now “Shishiga” could take on board 2 tons at once (by the way, on the most recent prototypes this figure was increased to 2,3 tons only due to new tires). Also, the "second series" of the 66-th car received a centralized system for pumping wheels, black-out headlights and, most importantly, the ground clearance increased to 315 mm. GAZ-66 could now be sent for export - for this they improved the interior trim, improved the instruments in the cab, put new carburetors, a transistor ignition system and even tubeless tires. Fuel consumption fell to 26 liters per 100 km. Of course, the main buyers of the car were countries with a hot climate, so the engineers had to adapt the cab to the appropriate conditions. I must say that this was not an easy task. A huge eight-cylinder engine, full of heat, was located actually between the passenger and the driver, which complicated its thermoregulation. It remains to be seen whether the designers managed to solve this problem with export modifications, but for Soviet drivers in the summer the cabin was unbearably hot in the summer and remained. 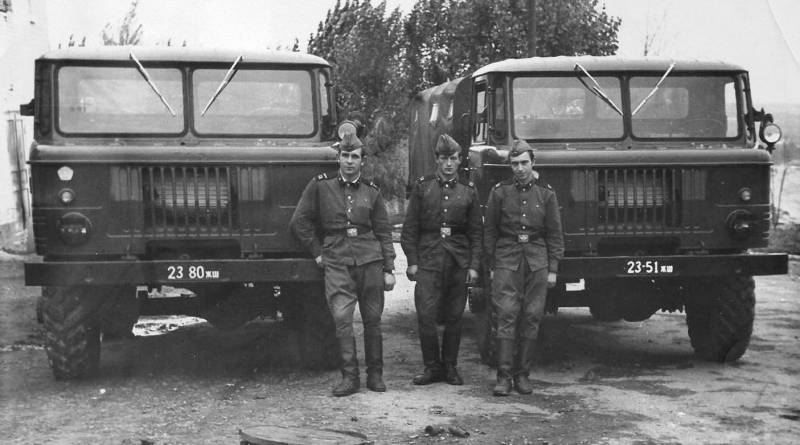 GAZ-66 has always been an experimental platform for various innovations of GAZ engineers, a large part of which was to improve the patency of the car. So, in the 60's on the airborne GAZ-66B, which was mentioned in the first part of the story, mounted caterpillar movers of a triangular shape. However, this design did not lead to a breakthrough in the cross-country ability of an already cross-country truck. Competition between car manufacturers in the USSR, if any, was only for state defense contracts. A typical example of this phenomenon was the GAZ-34, an all-wheel drive three-axle truck that has much in common with Shishiga. Then the army needed a new generation of medium-sized trucks capable of towing artillery pieces and one of the promising projects was the Moscow ZIL-131. 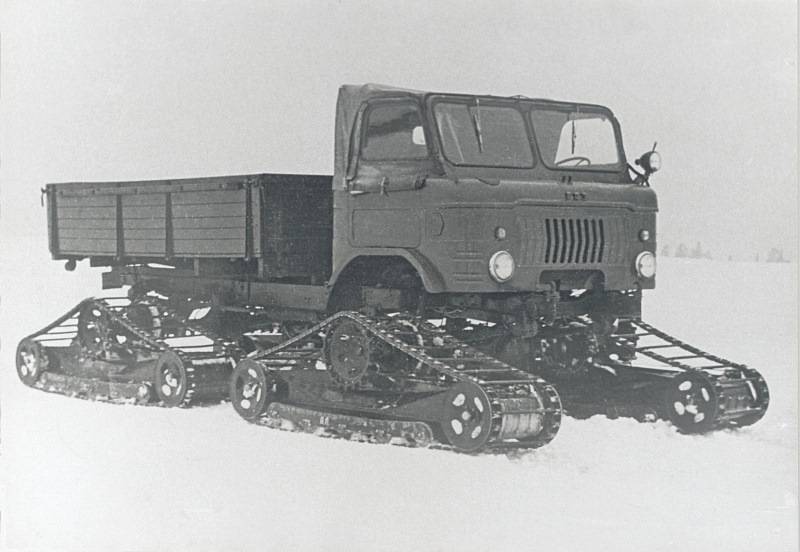 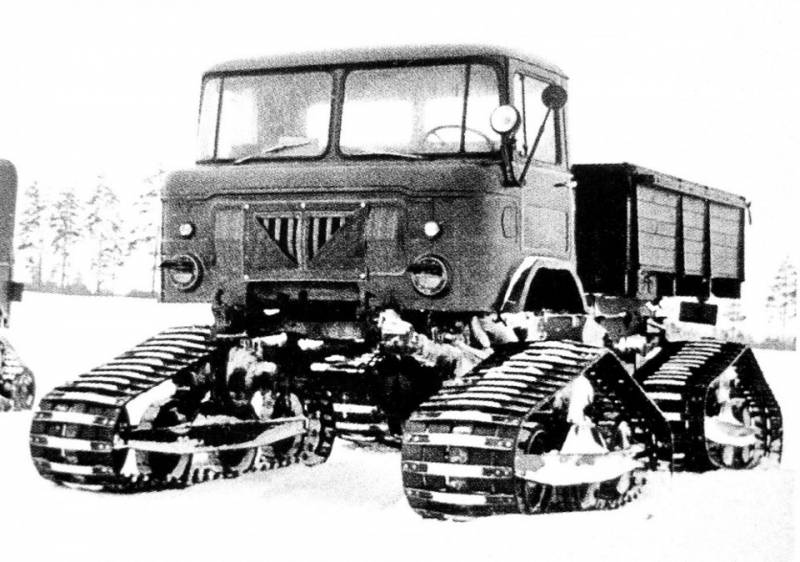 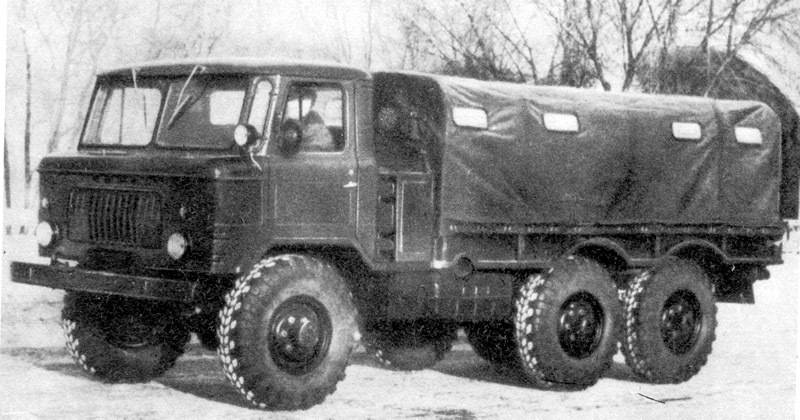 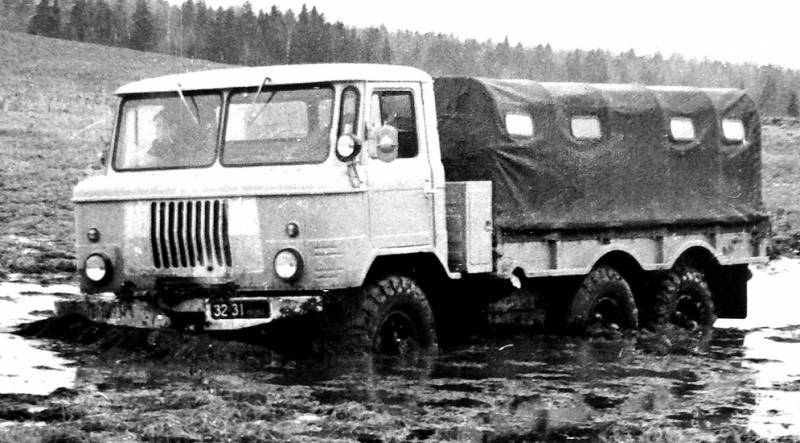 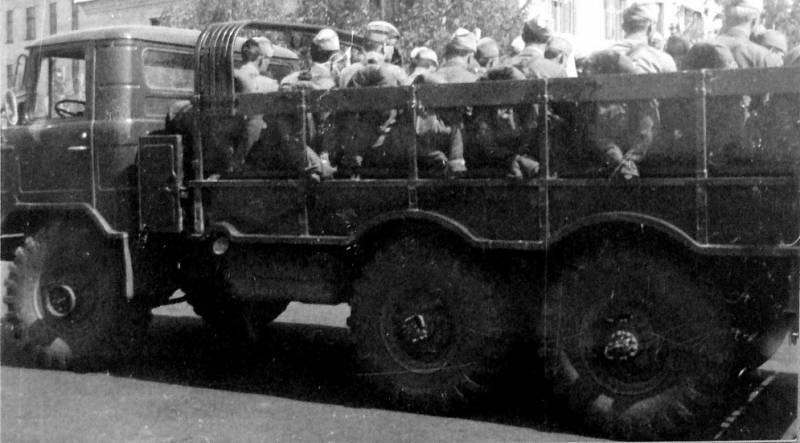 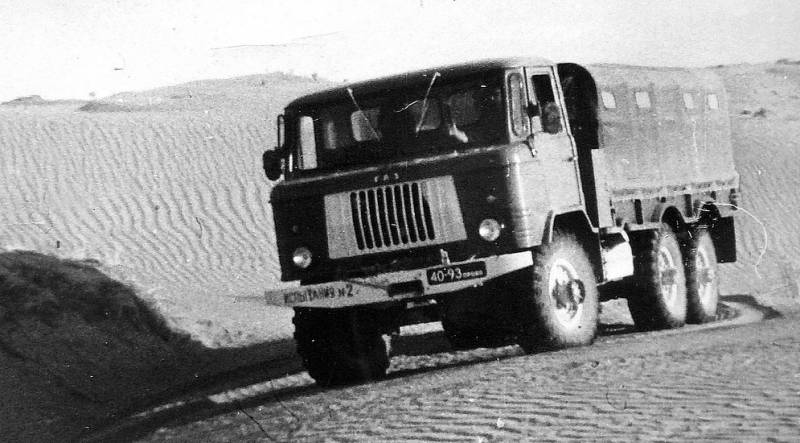 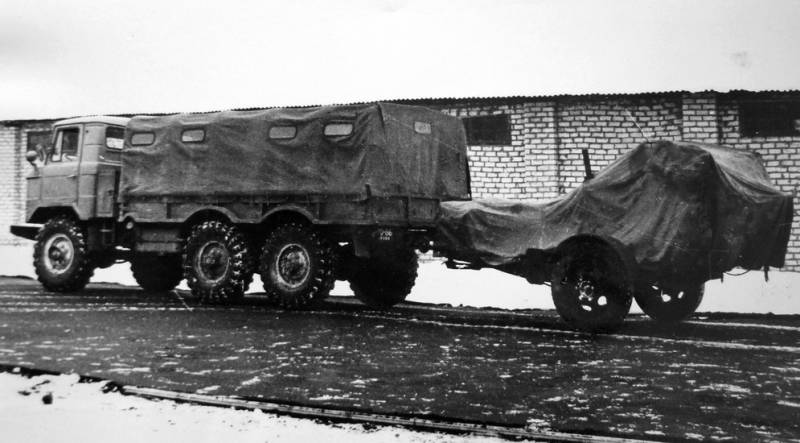 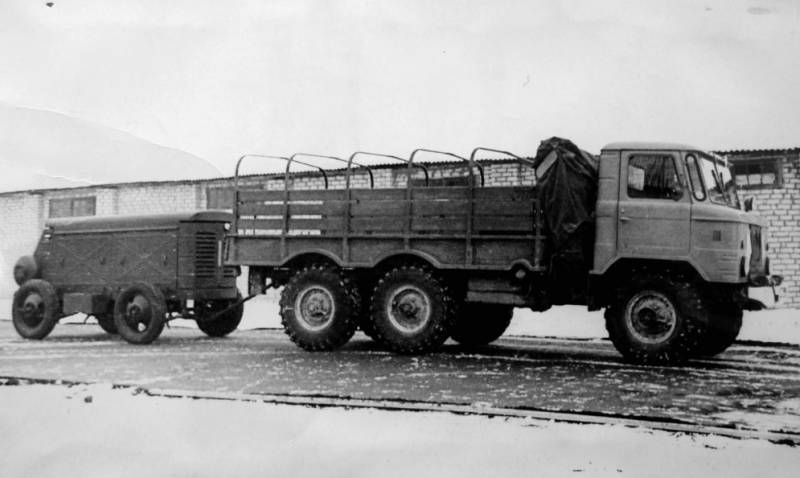 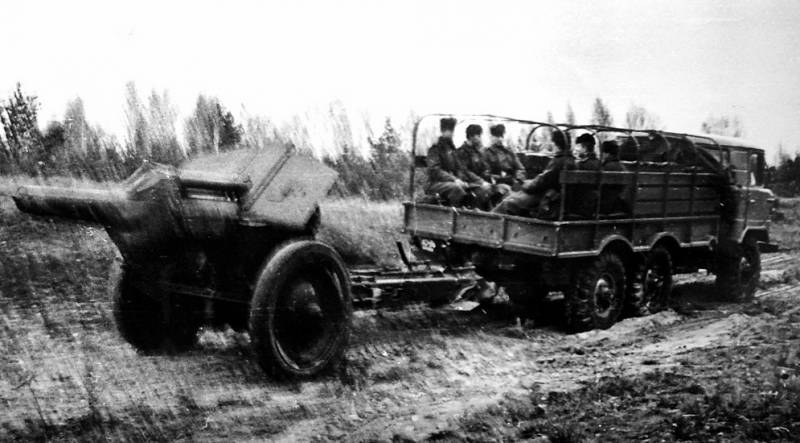 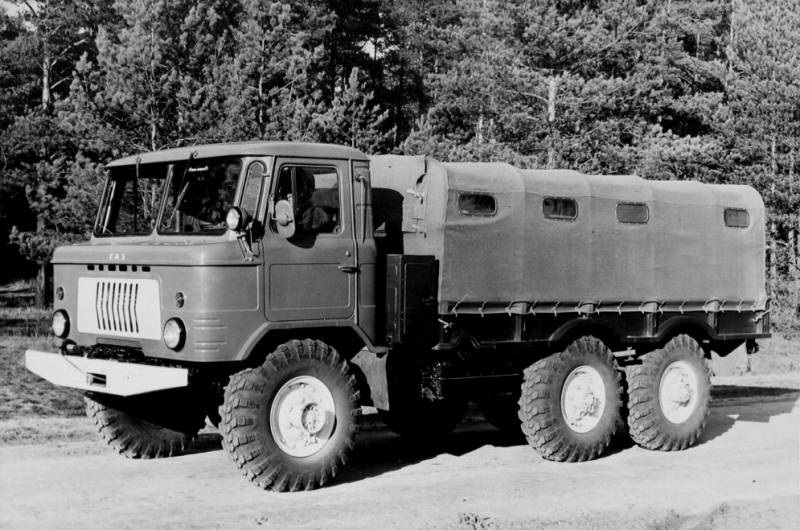 Military and life tests of the triaxial GAZ-34

Gorky designers in spite developed a new machine, as much as possible unified with the then-adopted GAZ-66. If we compare the 34 car with the ZIL-131, which was promising at that time, it turns out that the gas truck on the 1,3 tons is lighter with a similar payload, shorter and has a more capacious body. Despite the fact that the clutch was taken from ZIL-130, the gearbox was borrowed from ZIL-131, the motor was left native to Shishigi. Of course, power in 115 l. from. frankly not enough, and a more powerful gasoline engine simply could not fit. Perhaps a diesel would save the situation, but there were no such structures at all in the Soviet Union. Nevertheless, the tri-axle Shishiga passed the entire test cycle quite successfully (including several cars that passed from Moscow to Ashgabat and Ukhta) and was even recommended for use. However, the ZIL-131 arrived in time, which turned out to be more powerful and more convenient. Is it worth regretting that the Soviet Army did not have yet another cabover truck with a Jesuit gearshift lever arrangement?

Let us digress from the topic and mention another attempt by the Gorky Automobile Plant to enter the prestigious niche of large-format army trucks. 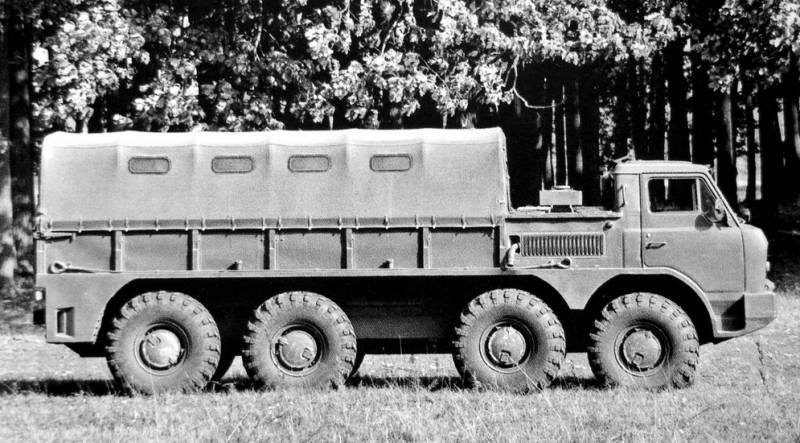 At the beginning of the 70's, the four-axle GAZ-44 "Universal-1" was developed, which, in fact, is a kind of hybrid between an ordinary truck and an armored personnel carrier. The car was run in at the 21 Research Institute, but Universal-1 did not show any radical breakthroughs in comparison with the analogues from Bryansk and Minsk and remained in the experienced category. After that, GAZ began to strictly adhere to the main line for the production of light trucks for the needs of the Ministry of Defense. Well, I didn’t forget about armored personnel carriers ...

Let's talk about the numerous modifications of the GAZ-66, which had the status of experienced or were in service. Of course, the whole variety of options cannot be covered, and it will be boring. Therefore, we touch on the most original. This, of course, was a van with a KSH-66 integrated body with a cab, in which the "Shishigu" can be identified only by wheels and lighting equipment. This device was assembled to withstand the shock wave of a nuclear explosion and therefore had streamlined shapes - on average, shock resistance increased three times. Continuing the theme of single-volume vehicles based on the GAZ-66, one cannot fail to mention the 38AC air transport bus, which was released in as many as 6000 cars. The bus was distinguished by curved panoramic windows, 19 soft seats and foam plastic insulation in body panels. In the AMC-38 variant, eight seated wounded and seven recumbent ones could be placed on the bus. Later in the 1975 year, another bus appeared - APP-66, which was a simplified version of the 38AC, was distinguished by its excessive weight, low passability and was assembled in the amount of 800 pieces. It should be noted that all these machines were not assembled in Gorky. Buses were made in Moldovan Bender, Voronezh and at the factory number 38. 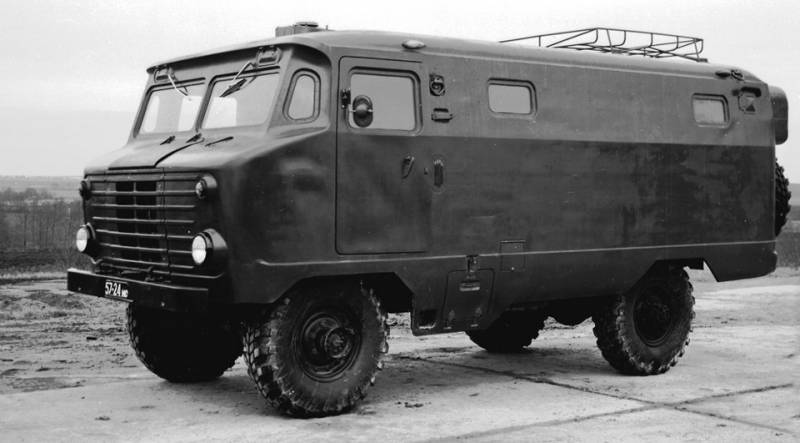 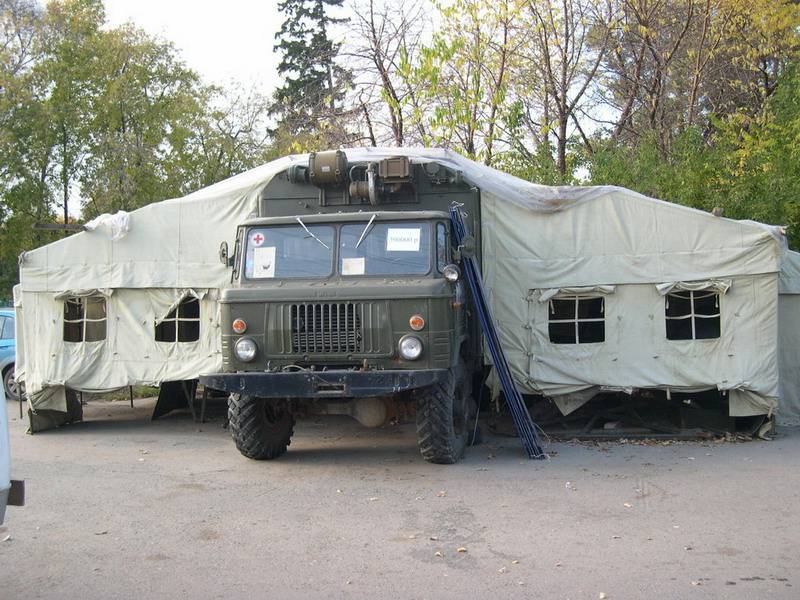 For many years, the brisk and passable GAZ-66 has become the hallmark of the medical service of the army of the Soviet Union. The most widespread, of course, was the AC-66 ambulance bus with a K-66 body, capable of taking on board up to 18 the wounded. A little later, the AP-2 dressing machine came to him in a pair, which was assembled at the Medoborudovanie enterprise in Saransk. The set included frame tents, deploying which, it was possible to simultaneously tie up to 14 people. At the end of the 80's, the whole medical complex PKMPP-1 appeared in the army, consisting of four GAZ-66 vehicles with K-66 kungs. Two of them were responsible for transporting the wounded and medical staff, the rest were loaded with belongings and medical equipment. 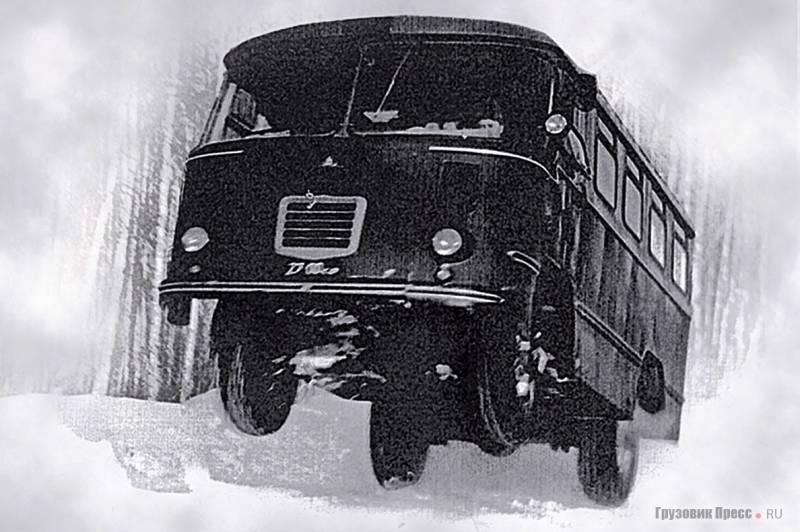 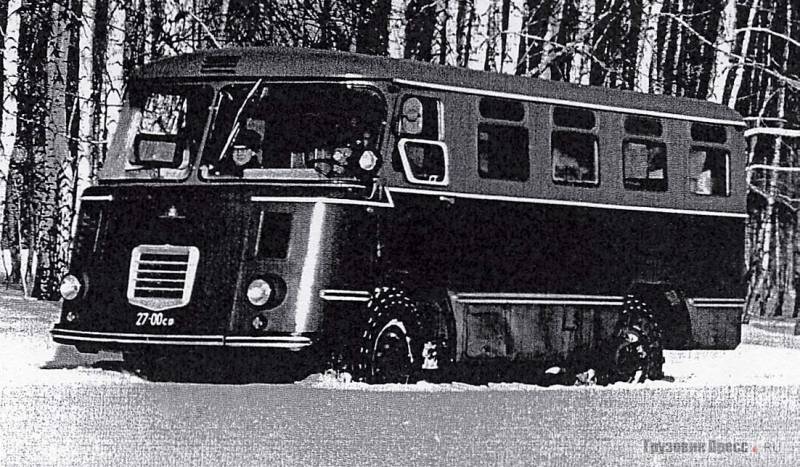 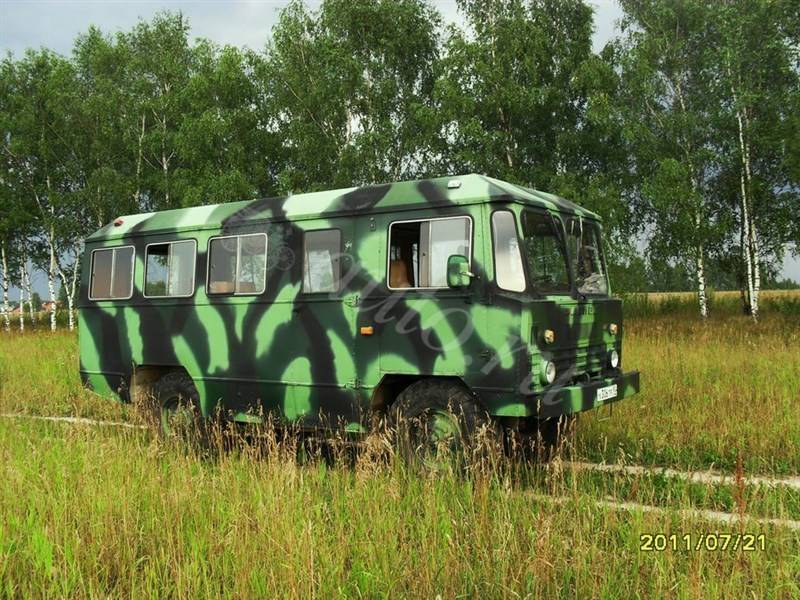 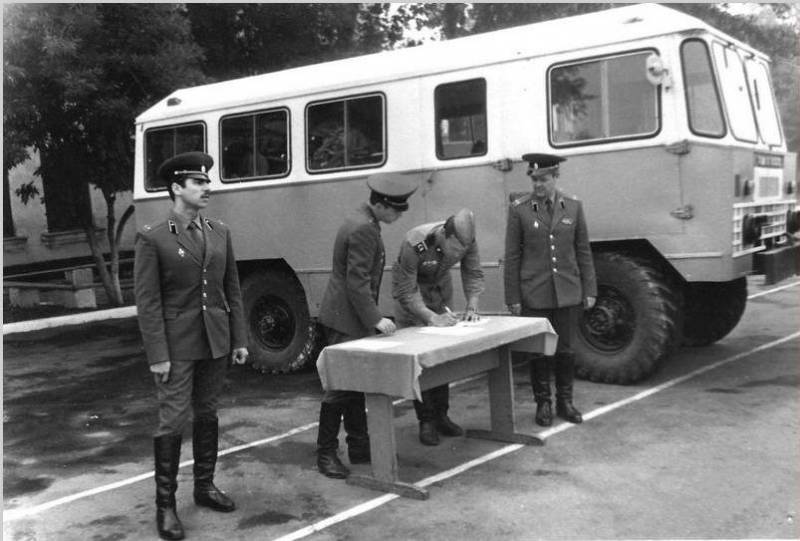 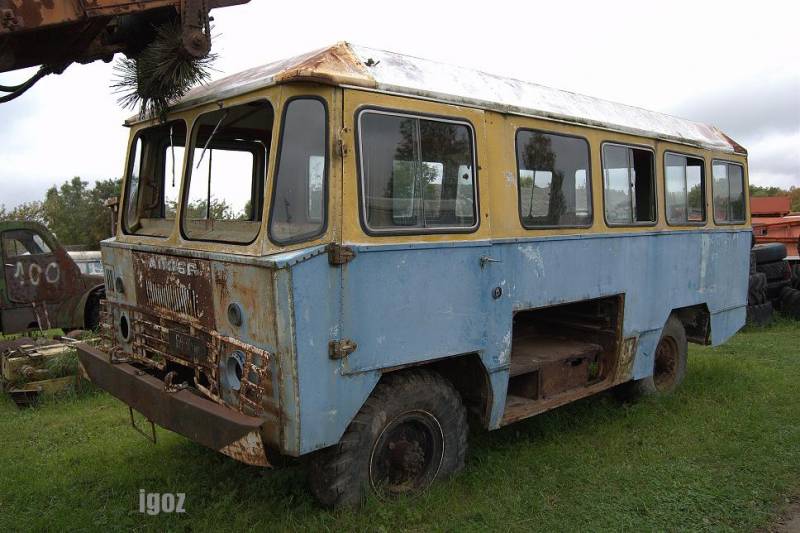 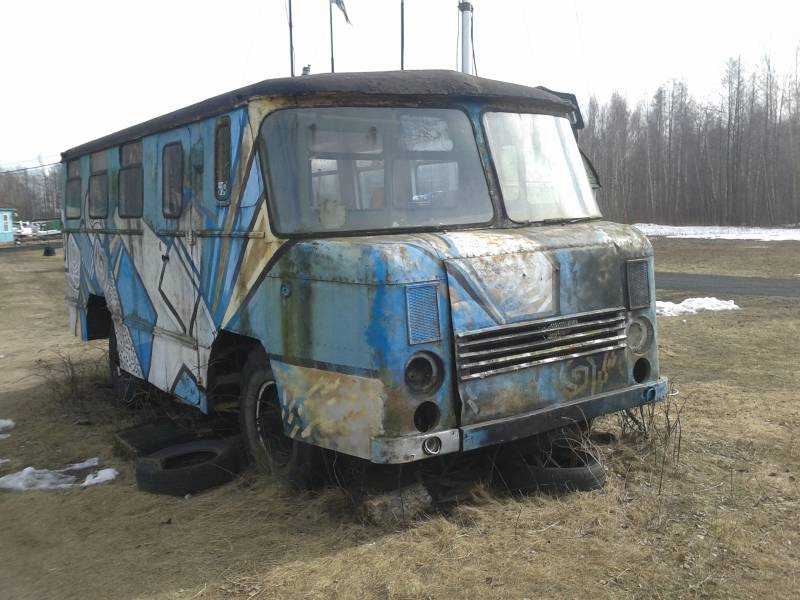 Buses based on GAZ-66 in the "cemetery"

The most exotic versions of the GAZ-66, of course, were cars with pontoon parks, collapsible bridges and multiple launch rocket systems. DPP-40 for the Airborne Forces has become in many ways an absurd and very expensive embodiment of the idea of ​​creating an airborne pontoon fleet with a carrying capacity of 40 tons. Firstly, to give the necessary lightness, the elements of the pontoons had to be made either from non-ferrous metals, or using inflatable rubber sections. And secondly, the pontoon fleet itself was located on 32 GAZ-66 cars (initially on a lightweight version of GAZ-66Б). How many IL-76 vehicles was required for such an armada? We also considered the use of GAZ-66 series vehicles for the transportation of an average CARM road collapsible bridge. For this, a simple truck platform was not suitable, therefore, they came up with a Shishigi truck tractor with an index P. However, a light machine did not cope with such a load and the bridge was given to the ZIL family. 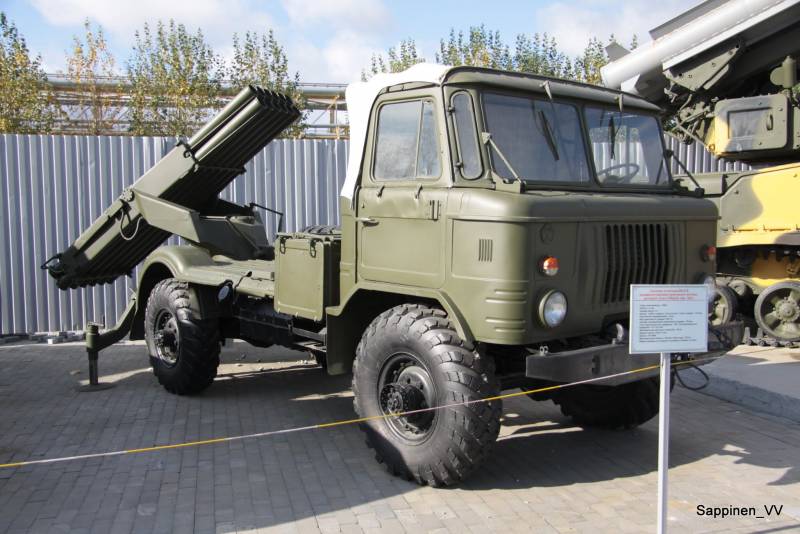 In 1967, the BM-12В 21-barrel multiple launch rocket system appeared on the base of the landing troops on the basis of the previously mentioned lightweight GAZ-66Б. In fact, it was an abridged version of the BMN-40 21-barrel system, which was put on the Ural family. In 6 seconds, a fire-breathing kid could release to a range of 20 km the entire charged stock of high-explosive M-21ОФ and recharge again using the 9Ф37 machine, which was also based on the GAZ-66. And, of course, all this artillery could be parachuted.

However, the real visiting card of the GAZ-66 with "weapons in hand" was a dumbbell with a charger-23-2 in the back. Here, the military perfectly combined the speed and maneuverability of the Shishigi with the deadly flurry of anti-aircraft gun fire. The Middle East, Africa, the North Caucasus, Ukraine - none of the conflicts in these territories could do without gantracks on the GAZ-66 platform.