October 9 2019
11
The U.S. Army reported that installation of advanced anti-jamming devices on light ground forces armored vehicles has begun. Devices are able to provide reliable GPS / GNSS navigation even in the conditions of jamming by electronic warfare. The threat of jamming GPS systems is a serious threat to the army, which is actively using high-precision weaponas well as navigation and guidance systems. 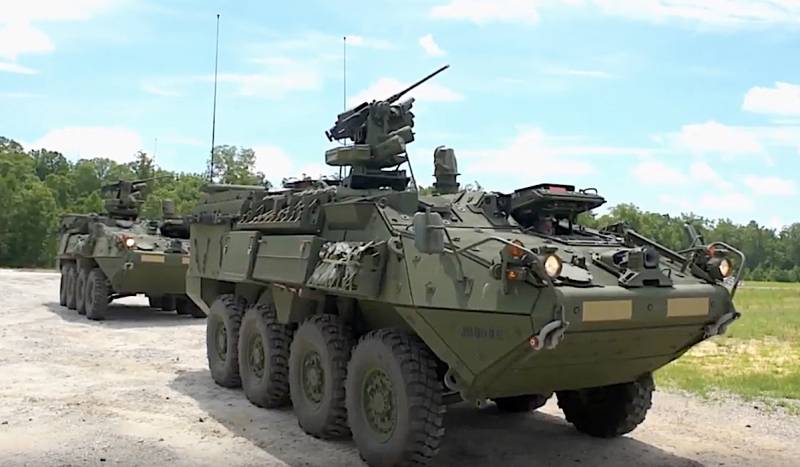 Currently, the threat of using electronic warfare equipment to jam GPS is one of the worst nightmares for the U.S. armed forces, as interference can knock troops out of their way, disrupt navigation or prevent the use of precision weapons on the battlefield.

Over the past month, the sixty-two first complexes were mounted on armored personnel carriers deployed in Germany. A few thousand more are planned to be installed on the vehicles of the European Command of the United States by 2028.

The system of guaranteed accuracy of navigation and data synchronization, known as MAPS, was developed to ensure reliable reception of satellite signals on devices mounted on platforms of lightly armored vehicles, such as BTR Stryker. This system is part of the Pentagon’s latest efforts to prepare the army for a meeting with a high-tech adversary such as Russia and China.

It is expected that the MAPS system will be installed on more than 300 Stryker BTR vehicles from the 2 Cavalry Regiment this year.
- said the representative of the military department Willy Nelson.

The Army also plans to equip armored brigades with the system and deploy them on Bradley fighting vehicles. tanks M1 Abrams and M109 Paladin self-propelled howitzers. After installing the technology on these "priority vehicles", the ground forces will assess the need to install the device on the so-called. vehicles of the second level.

In the past, armored vehicles used on each piece of equipment several advanced dual-frequency GPS receivers, also known as DAGRs, with the hardware necessary to decode encrypted GPS signals with a P-code. MAPS replaces several DAGR devices with “one really good system.”

In the event of a signal interruption, MAPS includes an automatic single-point mode based on a change in the detection range of points from the base depending on the speed of movement.