US certifies strike drone for flights in common airspace

October 9 2019
16
In the United States, there are no plans to certify the MQ-9B SkyGuardian drone for flying in a common airspace. As reported "NPlus1", Next summer is scheduled for testing, which will be carried out as part of the US national air traffic control system. 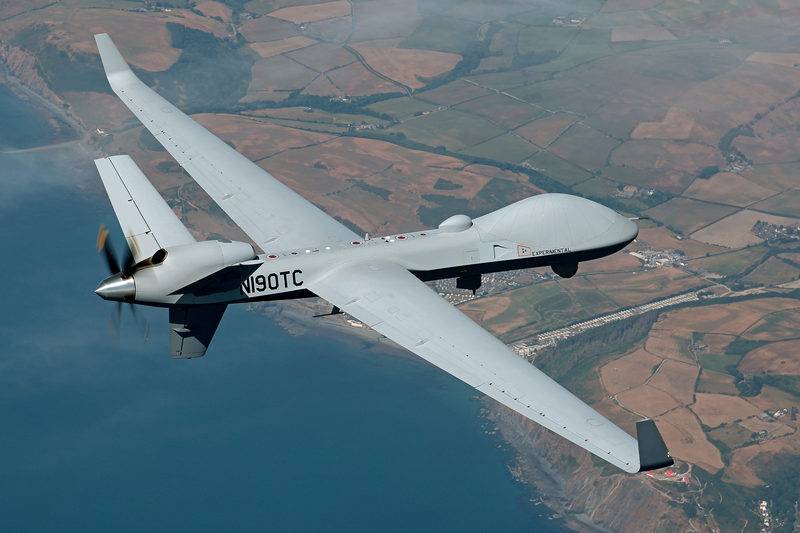 The American company General Atomics Aeronautical Systems, together with NASA, planned for the summer of the 2020 year the flight tests of the mid-altitude unmanned aerial vehicle MQ-9B SkyGuardian in common airspace. The ultimate goal of the test program is to bring the attack drone to the possibility of registering the air authorities of the United States and some European countries, after which it will be allowed to fly in general with manned air vehicles in the airspace.

As stated in the development company, as part of the flight tests, the operation of the systems for detecting air objects and avoiding collisions with them, as well as data exchange and drone control equipment, will be checked. According to the test plan, the MQ-9B will fly at an altitude of about 3 thousand meters above San Diego in California. During the flight, the drone will conduct a detailed survey of the city. Plans for further tests and the timing of certification of UAVs are not reported.

The MQ-9B mid-altitude drone was developed on the basis of the MQ-9 Reaper, its first flight took place at the end of the 2016 year. The device is capable of flying at speeds up to 388 kilometers per hour and at altitudes up to 14 thousand meters. Flight duration is up to 35 hours. The device is equipped with a modular weapon control system that allows explants to launch proprietary rockets from it.

Ctrl Enter
Noticed oshЫbku Highlight text and press. Ctrl + Enter
We are
US expert community is trying to identify ways out of the Afghan impasseYuri Drozdov: Russia prepared the role of the sacrificial calf
Military Reviewin Yandex News
Military Reviewin Google News
16 comments
Information
Dear reader, to leave comments on the publication, you must sign in.