October 9 2019
15
Over the past few years, specialists from the Norwegian company Nordic Ammunition Company / Nammo, despite the lack of funding and the complexity of designing high-tech components of integrated rocket-direct-flow engines (IRPDs), have been able to achieve significant success in developing the general concept of a promising 155-mm guided active-rocket projectile 155 mm Solid Fuel RamJet, equipped with a high-energy IRPD with solid fuel or paste-like charges of the gas generator. 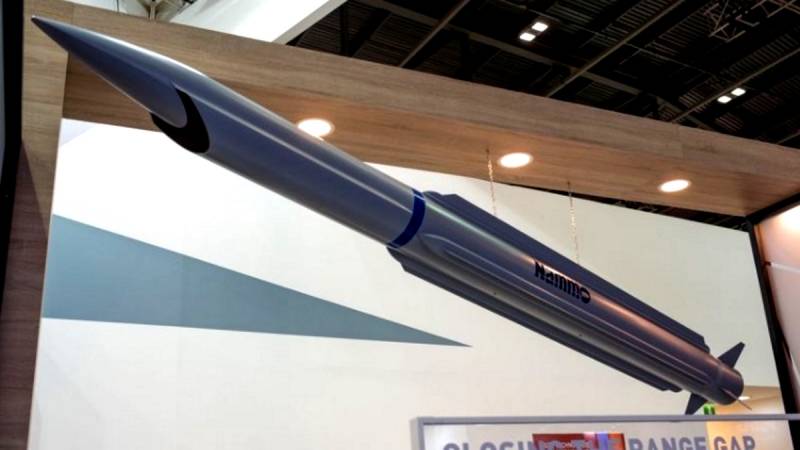 After the first acquaintance with the layout of the UAS 155 mm Solid Fuel RamJet prototype, presented to the public during the 26-th International Exhibition of Arms and Defense Technologies "Eurosatory 2018", held in June 2018, it was possible to come to an unambiguous conclusion, that a long-range long-range projectile will be able to give odds not only to standard M982 Block IA-2 guided active-reactive shells (55-60 km range), but also to the promising XM1113 and HVP ("Hyper Velocity Projectile") projectiles. The latter, when firing from promising XM907 / 908 guns of 58 caliber length, are capable of hitting targets at a distance of 75 and 115 km, respectively, at an average speed on the marching section of the order of 2900 — 3500 km / h.

Such high flight performance of the 155 mm Soild Fuel RamJet shells will be achieved both due to the extended RPM operating time increased to 50 s or more (with the possibility of regulating the intensity of the supply of solid fuel charge into the combustion chamber for prolonging engine operation), and due to 35% - a decrease in aerodynamic drag achieved by passing the oncoming air flow through the "free" path of the integrated RPD. The “free” IRPD path is represented by the channels of the air intake and duct, passing into the circuit of the combustion chamber. Thus, the promising “direct-flow” projectile from Nammo will have higher speed and kinetic energy in the terminal portion of the trajectory (just before the target is hit) than standard active-reactive artillery shells equipped with bottom gas generators with accelerating solid propellant charges.

Meanwhile, the “ramjet” 155 mm Soild Fuel RamJet projectile is by no means the only Nammo brainchild that embodies promising developments in the design of compact supersonic and hypersonic ramjet engines.

According to the famous British news and military analytical portal janes.com, citing an informed source at the headquarters of Nammo Raufoss, the company’s specialists began to develop a promising interceptor missile equipped with a more “high-torque” modification of the SFRJ integrated ramjet engine ( Solid Fuel RamJet). Based on the first photo of the prototype of the new missile, as well as the fact that the concept is being developed with the assistance of both the Norwegian Defense Research Institute (Forsvartes forskningsinstitutt) and the US Navy Research Laboratory, it can be concluded that a promising missile may be developed as part of the upcoming re-equipment of multi-channel naval air defense systems NSSM Mk 57 mod 12 / 13 to "high-energy" medium / long-range missiles. Moreover, the range and flight performance of the latter should significantly exceed the performance of the RIM-162 ESSM Block I / II missiles.

Moreover, the aerodynamic layout of the prospective missile launcher designed according to the “bearing case” scheme bears great resemblance to the Evolved Sea Sperrow RIM-162 family, and this is eloquent proof that the project is closely supervised by the Pentagon and specialists from Raytheon Missile Systems in the interests of the US Navy. In particular, the promising missile interceptor from the Norwegian Nammo, as well as the Raymond RIM-162 ESSM Block I / II, has four developed wings of ultra-small elongation, placed along the entire length of the hull and contributing to the reduction of aerodynamic drag while maintaining load-bearing qualities corps. Such a design allows the anti-aircraft guided missile to maintain a more or less acceptable maneuverability for intercepting the target even if the speed is reduced to 1,3 — 1,5М in the terminal portion of the trajectory.

It is also known that for effective interception of advanced aerospace attack weapons carrying out anti-aircraft maneuvers with 30 — 35 units overloads, the anti-missile must have available 62 — 70G overloads. Realization of this quality in the promising offspring of “Nammo” is facilitated by the presence of a gas-jet system of thrust vector deflection of the TVC type, which is successfully used in the architecture of the RIM-162 ESSM Block II SAM control system, complementing the very compact aerodynamic tail wheels. At the same time, the Norwegian direct-flow version of the Evolved Sea Sparrow Missile with integrated RPR SFRJ will be able to give odds to any of the existing modifications of the RIM-162 anti-aircraft missile. How?

While the thrust vector deflection system of the standard RIM-162 ESSM missiles remains effective only for a short burn-out period of the Mk 134 Mod0 dual-mode solid propellant rocket engine (after which only aerodynamic rudders are involved in the control, providing Sea Sparrows an overload of no more than 30 to 35G), a direct-flow WFD of the promising SAM from Nammo allows the ATS system to function over almost the entire flight path, including the approach area. This ability is ensured by equipping the Solid Fuel RamJet engine with a computerized system for regulating the supply of fuel to the combustion chamber through a specialized valve in the gas generator nozzle, which increases the operating period of the SFRJ engine to 300 — 350 s.

Thus, the super-maneuverability of the new-generation anti-aircraft missiles developed by Nammo will be observed even near the extreme range (70 — 100 km), while the highest maneuverability of the RIM-162 missile family is realized at a distance of no more than 15 — 20 km from ship launcher. As for the additional advantages due to the presence of a promising Norwegian missile launcher of an integral ramjet engine, here we are talking about the internal architecture of the "monthly" shark-mouth air intake, as well as the internal arrangement of the air ducts that go into the circuit of the combustion chamber.

Such a perfect and original configuration of the IRPD placement in the future will allow the Nammo brainchild to retain the weight and size characteristics necessary for use in the composition of the Mk 26 quad-launch transport containers placed in the cells of the Mk 41 universal vertical launchers “Aegis” frigates / destroyers and cruisers “Fritjof Nansen”, “Arleigh Burke”, “Kongo” and “Ticonderoga”, or as part of the Mk 48 modular vertical launchers installed on numerous surface ships not equipped with combat information and control systems “And zhis ".

It is logical to assume that the successful development of a project of a promising medium / long-range anti-aircraft missile from the Nammo company with an SFRJ-type ramjet engine could be a serious challenge for the modern Russian Onyx and Onyx-M anti-ship missiles, which can even be intercepted after it. Established anti-aircraft missiles ESSM Block I / II do not have such capabilities.

We are in Yandex Zen
Dangerous competitor "Coalition-SV". High-speed "carrying cone" with air defense capabilities
The United States took up the opposition of Coalition-SV. What is decided at the meeting of the Army Association?
15 comments
Information
Dear reader, to leave comments on the publication, you must to register.