Divorce did not take place

As expected, no separation of forces occurred. The Minister of Defense of Ukraine Andrii Zagorodniuk said that preparations for breeding in the area of ​​the Zolotoye (LNR) village are in full swing, but they cannot finally get a divorce, because, firstly, I don’t want to dismantle the cozy dugouts inhabited from the 2016 of the year when the APU entered here into the gray zone. Secondly, shelling is prevented from getting divorced. So the breeding will certainly take place, but only after seven days of silence, that is - never. 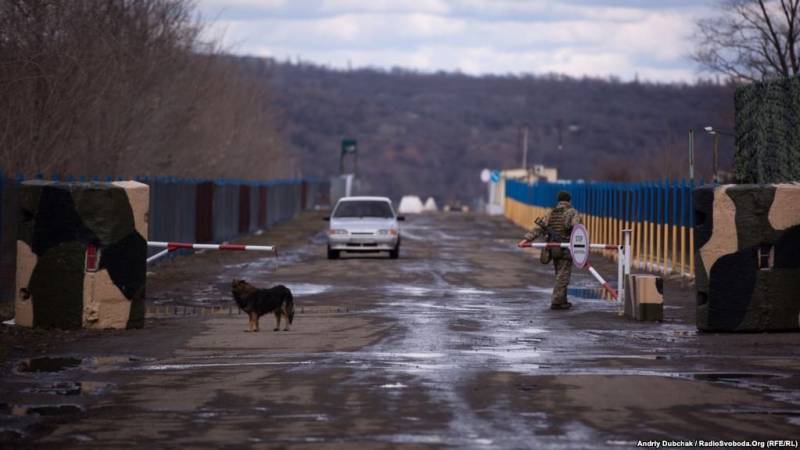 In the LPR, this was strictly answered. The representative of the people's police issued a statement in which he promised to respond decisively to provocations and disruption of agreements by the Armed Forces of Ukraine. That is to send a sneak to the OSCE, which seems to be for the whole history the conflict has never done anything worthwhile.

The cherry on the cake was the statement of the navigator of the Azov Biletsky battalion that they are against breeding and also want to go to Zolotoye.

What kind of place is it that everyone is talking about it and no one wants to leave it? Why, out of more than 400 kilometers of the demarcation line, are all pushed on a patch of several kilometers? Lost in the steppes, tormented by shelling of an aul with terrified inhabitants. It would seem that it is, but not everything is so simple.

It is through this village that a railway line passes through which you can get even from Donetsk through Debaltseve, even from Lugansk through Pervomaisk straight to Popasnaya, which is under the control of Ukraine. And from Popasna it is already possible to roll under the clatter of wheels straight to Slavyansk and to Kiev itself.

It would seem to whom and why to go to the enemy, and even by rail? But do not forget that you are in the Donbass.

Evil people say that through Zolotoye the road of life is laid, which allows you to control the transportation of coal mined in Novorossia, which, according to incomprehensible ordinary people, is sold here by one sworn enemy to another sworn enemy. However, enmity is one thing, and money is another.

It is not entirely clear why the Golden one was chosen - maybe in other places the roads were destroyed or there is more supervision (if there is any, this supervision). In the end, what can we know about muddy political and economic agreements? The main thing is that this fact has been repeatedly confirmed by the inhabitants of the neighboring towns and villages of the LPR - there are trains every night.

Well, in order to understand how much coal there is in Novorossia, just look at the last news - More recently, the DPR boasted that over the year, more than 6 million tons had been raised. And last year, together with the LPR, they reached 20 million tons. There is a coal somewhere around two thousand rubles per ton. In general, we are talking about billions of rubles. It is clear that not everything mined is exported - the main part is managed by Vneshtorgservice LLC. But still there is something for worthy people to improve their financial affairs.

As for Zolotoy (and it is indeed Zolotoy), everything is clear here - if from each passing car, and what’s there, the train, at least a little bit can be bitten off, it will also be a considerable amount. Therefore, only a fool will leave such a place. Unless after steep threats and big kickbacks. As for Biletsky, everyone saw him in the coffin. Semenchenko already blocked the railway. Did not help.