To the anniversary of В-52: a dead end of technical progress

October 4 2010
0
The US Air Force intends to modernize the fleet of its strategic bombers B-52. Improving onboard equipment and weapons will allow aircraft built almost 60 years ago to remain in service for a long time - it is assumed that the B-52 will be withdrawn from the Air Force no earlier than the 2040-s, or even later. The situation in which the main strategic aircraft of the world's strongest air forces is an almost 60-year-old veteran is an excellent illustration of the situation that has developed in the world today in the field of new technology development (by no means only military).

The modern world is fraught with many paradoxes. One of them is a slowdown in technical progress with increasing costs. This paradox is most vividly demonstrated in the military sphere. The cost of each next generation of combat aircraft is growing by an order of magnitude: F-22 “Raptor” in 2010 cost about 200 million dollars, F-15 “Eagle” in 1985 cost about 20 million, newest in 1960, F-4 “Phantom II "Cost 2 with a little million, and for F-86" Saber "in 1950, taxpayers laid out a little more than 200 thousands. 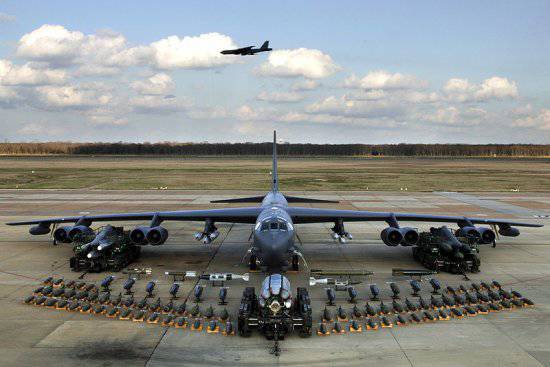 Like any currency, the US dollar is subject to inflation, but it is obvious that over the past 1985 years of 25, the dollar has depreciated not 10 times, and all the more, not 1000 times since 1950. Nevertheless, each new generation of combat aircraft costs an order of magnitude more expensive, while much more time was spent on developing new technology: It took less than four years to create the “Saber” at the end of 1940's from issuing requirements to the aircraft to adopting weapons. “Phantom” went this way in 1950 for seven years, “Needle” took 11 - from 1965 to 1976 years. Finally, "Raptor" went from issuing requirements for adoption for nearly a quarter of a century - from 1981 to 2005 a year.

Such price jumps simultaneously with the sharp increase in the time required for the development of new technology (in this case, the aircraft) signaled the approach to the technological barrier, which now, with one or another temporary gap, rested all the leading developers and manufacturers weapons.

This phenomenon occurs not for the first time, but each time the barrier is getting higher and higher, and the price to overcome it. After overcoming the next barrier for some time, new developments arise as if from a horn of plenty, and the technology, which was still perfect yesterday, is now becoming obsolete. Then the build-up of characteristics becomes more and more expensive until it reaches a certain limit, beyond which further improvements cost too much. The energy accumulated in the course of overcoming the previous barrier is exhausted. At present, the “stock” accumulated in the 30-50-ies of the 20th century, during the preparation for the Second World War, during the war itself and after its completion, came to an end. The then technological breakthrough of enormous power was successful for the leading countries of the world “thanks” to the Second World War, which made it necessary to increase the investments in research in the field of military equipment and fundamental engineering by orders of magnitude.

It is only to say that almost all of today's modern equipment and weapons are growing from there, from World War II, when the first samples of jet combat aircraft, guided weapons of various classes, effective radars, and finally, ballistic and cruise missiles appeared.

The situation with the technological barrier is well understood by the "techies" in the industry. But often it either cannot, or the administrators do not want to understand, from the management of companies to the highest military and political leadership, as well as experts without engineering qualifications working for the appropriate structures.

This misunderstanding entails dangerous consequences: betting on new equipment without careful consideration of the cost-effectiveness parameter can lead to the fact that instead of, say, combat aircraft of the abstract 1 model, combat aircraft of the 2 model will be adopted. Each new aircraft will be twice as efficient as its predecessor, and 10 times more expensive. As a result, the country that created the new weapon will face an unpleasant dilemma: the purchase of new equipment at the same level of military spending will lead to a five-fold drop in the effectiveness of the Air Force. For the same to maintain efficiency at the same level, it will take, respectively, a fivefold increase in costs, and to maintain the previous strength of the Air Force and increase their power by half, you will have to increase costs tenfold.

Of course, this growth is usually stretched over time, and in some areas it is artificially slowed down, but, nevertheless, the constant increase in the military budgets of the USA and the USSR during the Cold War, while the number of vehicles in the system decreased with each new generation an illustration of what was said.

As soon as the Cold War stopped, and the unrestrained growth of military spending became impossible, the pace of development of new technology slowed down many times, and its mass production often became unrealistic. In Russia, this effect was blurred by political upheavals from the collapse of the USSR, when the country had to abandon not only the mass of promising programs, but also in the most severe way to cut back on the forces that already existed. However, in the United States, the list of promising designs, the development and production of which were hacked to death after the end of the Cold War, is no less due to the unrealistic price and huge terms.

The United States tried to deceive fate by forcing a jump across the barrier with a series of ambitious programs, the most famous of which is FCS - Future Combat Systems, but this turned out to be impossible. The equipment developed in the framework of the FCS, came out incredibly expensive even for the United States, despite the fact that the upgraded models of 1970-s development machines were practically not inferior to it in efficiency. As a result, the program was terminated.

How quickly this barrier can be overcome is unclear. However, based on the information today, the military and armaments developers in the United States and Russia are preparing for the fact that the systems currently in service will be manufactured and remain in service for many more decades to come. This is logical: there are no fundamental inventions capable of turning the world of military equipment in the way it was done in the middle of the last century with the help of a nuclear reactor, jet engine, radar, etc. It remains only to improve what is possible, gnawing through the percentage of efficiency gains for all the big money in anticipation of breakthroughs in fundamental engineering.

And the best symbol of what is happening will remain the same matte black B-52, a giant eight-engined bomber created in 1946-53, produced before 1962, “perpetual aircraft”, counting decades of service one after another.