Who and why they hung in the Soviet Union

October 4 2019
198
Before the introduction of a moratorium on the death penalty in our country, the death penalty was carried out by execution. But on August 1 of 1946 in Moscow, the former commander of the Russian Liberation Army “traitor No. 1” Andrei Vlasov and a group of his associates were hanged. And this was far from the only execution in the form of hanging. 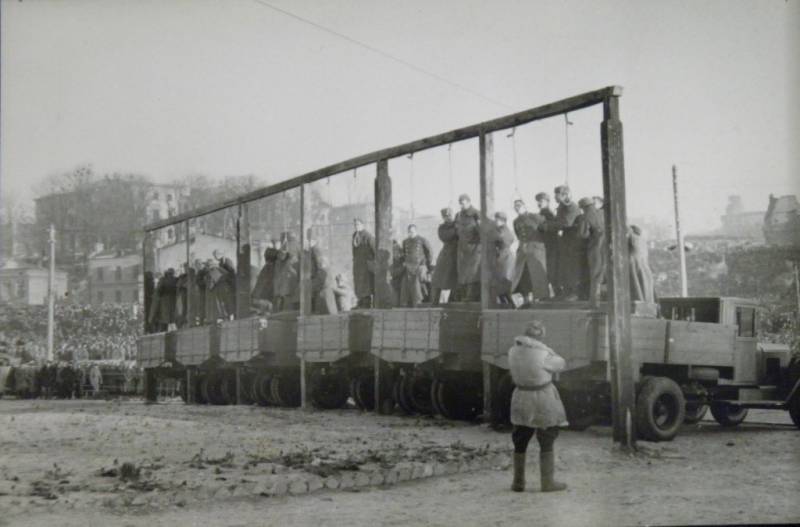 The death penalty in the Soviet Union

Unlike so many other states, the USSR has never been very diverse in the choice of the form of the death penalty. Neither the electric chair, as in the United States, nor the hanging, as in many European countries of that time, nor the chopping off of the head, as in the Middle East, were practiced in the USSR.

In the vast majority of cases, the death penalty in the Soviet Union was carried out by means of execution. The sentence was carried out first by security units, then by individual performers. In this, the Soviet capital punishment differed from pre-revolutionary Russia, in which they not only shot (mainly military personnel), but also hanged them.

However, when in the summer of 1918 in the Penza province a peasant uprising broke out against the Soviet regime, Vladimir Ilyich Lenin personally sent a telegram to the Penza Bolsheviks, in which he demanded to hang 100 fists and "bloodsuckers", focusing precisely on hanging, as the people should see the hanged enemies. However, the main instigators of the uprising were shot.

In Stalin's time, including during the purges of the mid-second half of the 1930's, death sentences were also carried out by execution. They were shot at special training grounds and in the prisons themselves. The killings of prisoners by other means were extrajudicial in all cases.

Why did the hangings return during the war years

The Great Patriotic War made adjustments to capital punishment. By the way, shortly after the victory over Nazi Germany, in 1947, the Decree of the Presidium of the USSR Supreme Soviet from 26.05.1947 “On the abolition of the death penalty" was issued, according to which capital punishment should no longer be applied in peacetime.

However, in January of the 1950 of the year “at the request of the workers” the execution was returned for traitors, spies and saboteurs, and in the Criminal Code of the RSFSR of the 1960 of the year the death penalty was provided for a very impressive list of crimes - from treason to the motherland to rape with especially grave consequences. They also continued to execute the method of execution, but in a short period of time - from 1943 to 1947 years - such a penalty as hanging was actively used.

In the spring of 1943 of the year, Decree of the Presidium of the Supreme Soviet of the USSR No. 39 of 19 of April 1943 of the year “On punitive measures for Nazi villains guilty of murders and tortures of the Soviet civilian population and captured Red Army soldiers, for spies, traitors from among Soviet citizens and for them accomplices. " Just at that time, the Soviet state security bodies already possessed comprehensive information about the atrocities of the Nazi invaders and their accomplices in the occupied territories.

In paragraph 1 of the decree for German, Italian, Romanian, Hungarian, Finnish "fascist villains" who were convicted of murders and tortures of the civilian population and captured Red Army soldiers, as well as for spies and traitors from among Soviet citizens, the death penalty was established by hanging. Thus, the decree of April 19 of the 1943 of the year was unique, since hanging in the Soviet Union had never been used as a capital punishment before.

The Soviet leadership decided to apply the hanging against Hitler's executioners and their minions, guided by the need to show the people the inevitability and severity of punishment for war crimes. The execution looked like a more humane measure of punishment, and in case of hanging the execution was carried out publicly and the hanged criminals for some time hung on to the joy of the Soviet people and intimidation to other executioners and traitors of the Soviet people.

But in practice, hanging was also used by military courts at the front against captured Hitler punishers and policemen. For example, from 15 to 18 of December 1943 of the year, a military tribunal of the 4-th Ukrainian front was tried on a Gestapo employee and a traitor from among the citizens of the USSR. Both defendants were sentenced to death by hanging and hanged. 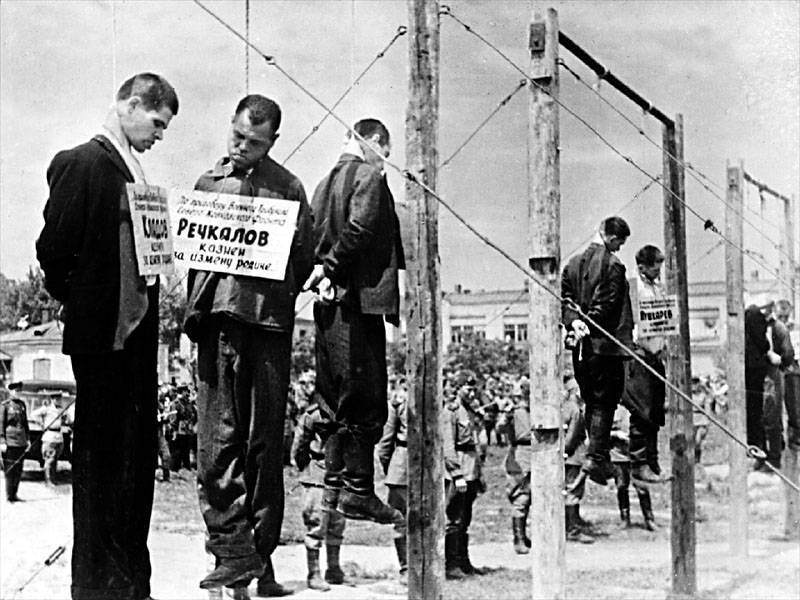 The first process against traitors

14 — 17 On July 1943 in Krasnodar, by this time freed from the Nazi invaders, the first trial of a group of traitors who collaborated with the Nazis and were responsible for the massacres of Soviet citizens — civilians and Red Army soldiers — took place.

11 arrested traitors who served in the SS-10-A Sonderkommand and the Krasnodar police appeared before the tribunal. Paramonov, Tuchkov and Pavlov received 20 years of hard labor, and Tischenko, Rechkalov, Pushkarev, Naptsok, Misan, Kotomtsev, Kladov, Lastovina were sentenced to death by hanging and 18 on July 1943 of the year XN hours were hanged in the central square of Krasnodar.

About 50 thousand people attended the execution of police officers from the Sonderkommando. This was perhaps the first such large public execution of traitors during the war years. Then, similar processes involving the public hanging of war criminals took place in a number of other cities of the Soviet Union - in Kiev, Nikolaev, Leningrad.

A number of prominent traitors to the motherland and white emigrants who collaborated with Nazi Germany and imperialist Japan were sentenced to death by hanging.

On May 12 on May 1945, former Soviet General Andrei Vlasov, commander of the Russian Liberation Army, was detained by Soviet troops on German territory. Soon his other prominent comrades-in-arms of the ROA were arrested. 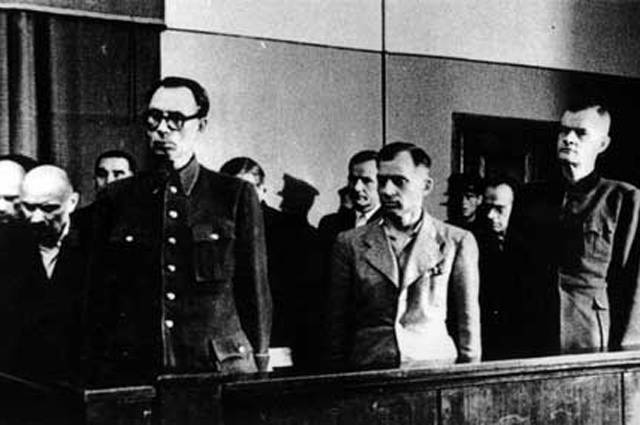 The trial of Vlasov and the “Vlasovites” took place on July 30-31 on July 1946. It was of a closed nature, although usually the Nazis and traitors "for edification" were tried and executed publicly. But in the case of the Vlasovites, the Soviet leadership refused the publicity of the trial, as it was feared that Vlasov would begin to express anti-Soviet views. 1 of August 1946 of the year Andrei Vlasov and his associates were executed by hanging. They were burned and buried in the ground.

On 28 on May 1945 in the city of Lienz, the British command transferred to the Soviet Union 2,4 thousands of Cossacks captured by British troops who fought on the side of Nazi Germany. Among them were such notable figures as cavalry general Pyotr Krasnov, Lieutenant General Andrei Shkuro, Major General Timofei Domanov, Major General Sultan-Girey Klych.

All these people, former white officers, during the years of World War II supported Nazi Germany, took part in the formation and direction of the Cossack units on the eastern front. In particular, Pyotr Krasnov, since September 1943, served as head of the Main Directorate of Cossack Forces of the Imperial Ministry of the Eastern Occupied Territories of the Third Reich. 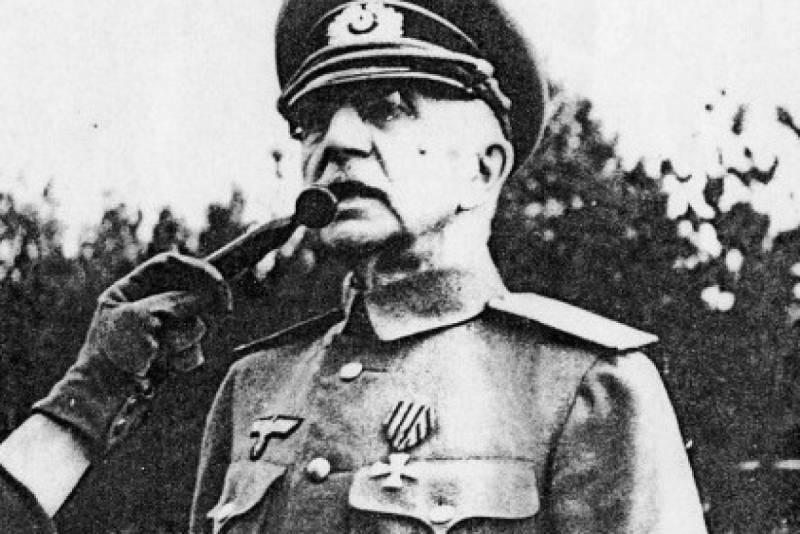 Timofei Domanov was a field ataman of the Cossack Camp and a member of the Main Directorate of Cossack Forces of the Imperial Ministry of the Eastern Occupied Territories of Germany. Starting from 1944, Andrei Shkuro served as chief of the Reserve of Cossack Forces at the General Staff of the SS Forces, had the rank of Lieutenant General of the SS Forces and SS Group Gang and was responsible for the preparation of Cossack units of Hitler Germany. Finally, Sultan-Girey Klych commanded the formations from the highlanders of the North Caucasus, which were part of the Cossack Camp of General Krasnov.

Together with Krasnov, Shkuro, Domanov and Sultan-Girey Klych, Lieutenant General Helmut von Pannwitz appeared before the court. Unlike the above-mentioned Cossack generals, Pannvits had nothing to do with Russia - he was a Prussian aristocrat by birth and from a young age he served in the German army. When Germany attacked the USSR in 1941, Pannvitz commanded an intelligence battalion with the rank of lieutenant colonel. At the front, he quickly made a career and was transferred to the apparatus of the Supreme Command of the Ground Forces, taking up the issues of creating armed formations from among the peoples of the USSR, primarily Cossacks.

In 1944, Pannwitz was promoted to lieutenant general. By this time, he oversaw the Cossack units of Nazi Germany, and in March of the 1945 of the year he was elected High Camping Ataman of the Cossack Camp. That is, Pannvitz was not a native of Russia and a traitor to the Motherland, but was an ordinary German general. And he had every reason to avoid being extradited to the Soviet Union, since he was a subject of Germany, but voluntarily agreed to be extradited to the USSR. Pannvitsa suffered the fate of other leaders of the Cossack Camp - he was sentenced to death by hanging. On 16 of January 1947 of the year Krasnov, Shkuro, Domanov, Sultan-Girey Klych and von Pannwitz were hanged on the territory of the Lefortovo prison by the court.

In August 1945, after the victory over Japan, a number of former white émigrés and traitors to the motherland who sided with the Japanese Empire and engaged in subversive activities against the Soviet Union were arrested by Soviet security agencies. Among them was Ataman Grigory Semenov, the famous Civil War participant, Lieutenant General of the White Army, who actively participated after the emigration from Russia in the affairs of the Bureau for Russian Emigrants in the Manchurian Empire (BREM). 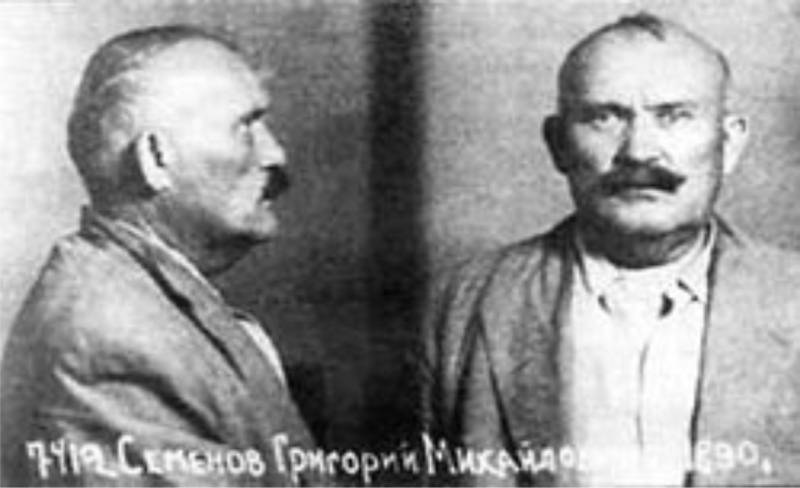 From 26 to 30 on August 1946, the trial of the "Semenovtsi" was held in Moscow. 8 people appeared before the tribunal - Ataman Grigory Semenov himself, lieutenant general Lev Vlasyevsky and Alexei Baksheev, finance minister in the Kolchak government Ivan Mikhailov, leader of the All-Russian fascist party Konstantin Rodzaevsky, member of the leadership of the All-Russian fascist party Lev Okhotin, journalist Nikolai Ukhtomsky, former white officer Boris Shepunov. Ukhtomsky and Okhotin were sentenced to 20 and 15 years of hard labor, Baksheev, Vlasyevsky, Rodzaevsky, Mikhailov and Shepunov - to execution, and Grigory Semenov - to death by hanging.

Thus, Ataman Semenov was the only one of the defendants who was sentenced to be hanged and hung on 30 on August 1946 of the year. In fact, he was punished, albeit belatedly, for his actions during the Civil War in Russia, since during the Second World War Semenov no longer played a special role in the activities of the Japanese special services against the USSR, he was rather a symbolic figure.

After the trials of Hitler's punishers and traitors, hanging as a capital punishment in the Soviet Union was no longer applied. Policemen and punishers exposed in the 1960's - 1970's were already sentenced to death by execution.

We are in Yandex Zen
Chernobyl notebook. Part of 3
Father told
198 comments
Information
Dear reader, to leave comments on the publication, you must to register.