Politician who fought for the Russian Crimea

October 4 2019
28
If in the 90s of the last century the power in the Kremlin were to stand at least a bit rooting for the interests of the country, Crimea could return to Russia much earlier. And with much less complexity. Crimean will was just that. 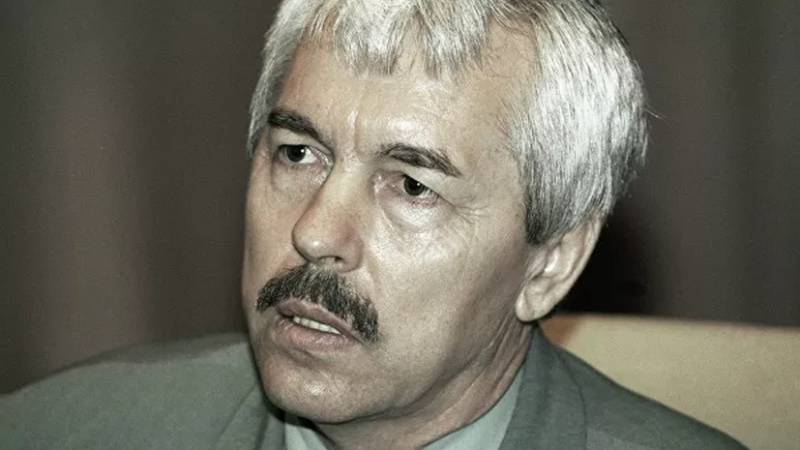 2 October in Simferopol was buried a politician who can be called the leader of the first "Crimean spring." This is the first and only president of the Republic of Crimea, Yuri Meshkov, who passed away on September 29 in Krasnogorsk, Moscow Region, at the age of 73 years. Not all who, one way or another, advocated the reunification of Crimea with Russia in those years, were Meshkov’s associates, but now even his former opponents, expressing condolences, noted the considerable merits of this man, emphasizing that he was a true patriot.

Yuri Alexandrovich was born on October 25 of the 1945 of the year not in the Crimea, but in the Dnepropetrovsk region, however, his childhood passed in Simferopol. He comes from a Russian-Ukrainian family. In 1977, Meshkov graduated from the Law Faculty of Moscow State University, after which he worked as an investigator in the Crimean Regional Prosecutor's Office (later became a senior investigator). His biography also includes sailing on the Skif scientific research vessel. As he said in one of the interviews, the prosecutor’s office “became stuffy,” since it was very difficult to fight crime in conditions when large authorities covered the criminals. In addition, he was worried about some decisions of Mikhail Gorbachev, in particular, the anti-alcohol campaign - as a result, it hit precisely the Crimea, where vineyards were cut down barbarously.

In 1990, Meshkov entered politics. He became a deputy of the Crimean Regional Council. For a while he was in the camp of the so-called democrats, he headed the local Memorial. In 1991, he opposed the GKChP. Immediately after the collapse of the Soviet Union, Meshkov advocated that Crimea first gain independence, and then join Russia. He founded the Republican Movement of Crimea, and later - headed the Republican Party of Crimea. These organizations then played a large role in the creation of the Russian community of Crimea.

On October 23, deputies of the Supreme Council of the Crimean Autonomous Soviet Socialist Republic (the former Crimean Regional Council) adopted a law according to which a referendum on the status of Crimea was to be held on the peninsula. However, the referendum decided not to hold. In protest against the disruption of the vote, Meshkov went on a hunger strike and kept her for 12 days until he was sent to a hospital.

The struggle for a referendum on the exit of the peninsula from Ukraine continued. The republican movement of Crimea, led by Yuri Alexandrovich, collected signatures for holding such a plebiscite, but this attempt was also blocked by the Supreme Council of Crimea.

In 1992, the Constitution of the Republic of Crimea was adopted. The peninsula was identified as part of Ukraine. However, under this Constitution, the Republic had some freedom, in particular, the right to enter into relations with other countries. In addition, the post of President of the Republic of Crimea was established, the elections of which were to be held in January 1994. Meshkov decided to run for this post. Its block was called short and clear - “Russia”. During the election campaign, Yuri Alexandrovich survived an attempt on his life.

In the second round of elections, Meshkov went along with his main rival, the head of the Supreme Council of the Republic, Nikolai Bagrov. And he won a landslide victory - 73% of the vote.

As the head of the Republic, the politician strove for rapprochement between Crimea and Russia. Among his plans are the introduction of the ruble zone, a military and political alliance with Moscow, and Russian citizenship for Crimeans. By his first decree, Meshkov introduced Moscow time on the Crimean territory. He constantly turned to Russian President Boris Yeltsin, asking for support. But did not get it.

It should also be noted that the main legislative body of Russia, the Supreme Council, back in May 1992, announced that the annexation of Crimea to Ukraine was illegal from the very beginning, and the decision on this was void from a legal point of view. However, just 26 years ago, in October 1993, the Supreme Soviet of Russia, as you know, was shot from tank guns, and the decision on the Crimea was made by completely different people.

So, Meshkov never received support from Moscow. With the exception of the then mayor of Moscow, Yuri Luzhkov, but this was not enough. After all, the Ukrainian authorities, headed by President Leonid Kuchma, also did not sit idle, seeing in Crimea the aspirations towards Russia.

On 17 of March 1995 of the year Ukraine liquidated the Constitution of the Republic of Crimea. Thus, Kiev seriously limited the autonomy of the peninsula. The post of president of the Republic of Kazakhstan was also abolished. Ukrainian special forces were sent to Simferopol.

Meshkov, however, decided to resist, to barricade himself in his own office. From there, he was unconsciously taken to a hospital. As Yuri Alexandrovich himself later said, he was simply poisoned. Then the people who supported their head handed him food, and someone under this cover brought a poisoned dish. At the same time, the SBU banned the provision of medical assistance to Meshkov, and officers of the Black Sea rescued him fleet Russia, taking out of the Republic through the Kerch Peninsula.

Since then, the politician has lived in Moscow. In 2011, he tried to come to Crimea (his wife Lyudmila died there). However, the Ukrainian authorities seized him and deported him for a term of 5 years. The next time, Meshkov was able to visit Crimea only after the peninsula was finally reunited with Russia (and he himself could not vote in a referendum). “The people of Crimea returned my homeland!” - he said so.

Unfortunately, then Meshkov was undeservedly forgotten. He did not find a worthy place in the republic. He rather harshly criticized some aspects of the Crimean authorities. A very characteristic case is when the first president of Crimea arrived in Simferopol for the fifth anniversary of the historical referendum and was detained by the police while trying to go to celebrations. He was sentenced to two days of administrative arrest, which, of course, could not but affect the state of health of an elderly man.

It so happened that in early September, Yuri Meshkov went on vacation to Turkey, where he had a conflict with the hotel staff. Guests did not want to settle in the reserved room, offering the obviously worst option. As a result, he nevertheless achieved settlement, but he became sharply ill. A stroke ... Yuri Alexandrovich was transferred to the suburbs, but he never got out of the disease.

Yeltsin surrendered us to Kuchma at the moment when we had already entered the economic and legal space of Russia,
- Meshkov said with regret about the fact that he was not able to bring Crimea to his native harbor in the 90 years.

But, perhaps, if the then Russian leadership would support the choice of Crimeans, the entire process of returning the peninsula would not be so painful at all. The West would not shout about “annexation”, because it was unprofitable for Western politicians to oppose Yeltsin at that time. And in Ukraine, real fascism has not yet come to power. But история it does not have a subjunctive mood, and now we have what we have ... The main thing is that Crimea is finally in Russia, as President of the Republic Yuri Meshkov wanted.