July 11 2012
34
An-124 "Ruslan" (according to the NATO classification "Condor") is a truly unique serial transport aircraft, which has no analogues in the dimensions of the cargo compartment and carrying capacity. The heavy long-range military transport aircraft An-124 was developed by OK Antonov Design Bureau and is by far the largest of the serial military transport aircraft in the world. "Ruslan" is designed for transportation over long distances of regular combat and service equipment of the airborne or motorized rifle division (brigade), parachute assault of military equipment (with crews and crews) and cargo, as well as transportation of large-size and heavy cargo for national economic purposes.

The prototype "Ruslan" first flew on December 21 1982 in Kiev. The plane raised into the air a crew of eight test pilots V. I. Tersky (commander of the vessel) and A. V. Galunenko, as well as flight engineers V. M. Vorotnikov and A. M. Shuleshchenko, navigator A. P. Poddubny, radio operator M. A. Tupchienko, Leading Test Engineers, VS Mikhailov and M. G. Kharchenko. Serial production of the aircraft was deployed at the Ulyanovsk AIC Aviastar and KiAPO.

An-124 "Ruslan" returned to the Soviet Union world leadership in heavy transport aviationdepriving palm championship American Lockheed C-5 Galaxy. In 1985, the Soviet An-124 aircraft managed to set 21 world records, among which there was a record for carrying capacity (lifted 171 kg to a height of 219 m), and on May 10, 750, an airplane with the crew of V.I. Tersky set the world range record, breaking 6 1987 km. on a closed route. 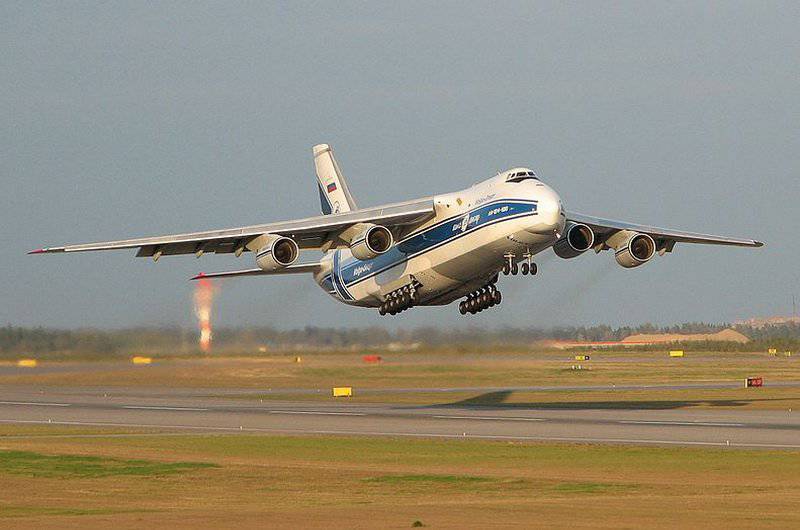 In 1985, the Ruslan was first shown at the French Air Show in Paris. The following year, the aircraft began operation "Aeroflot". He mainly operated flights on Siberian airlines, transporting very large cargoes intended for the industrial development of oil and gas. On the arsenal of the military transport aviation of the USSR, the aircraft embarked in January 1987. As of the 1998 year, an 54 flight copy was released, as well as one glider for performing static tests. At present, the An-124 is used by the 2-I regiments of the Russian Air Transport Corporation (25 aircraft), as well as by the 6 private airlines of Russia and Ukraine.

Production of aircraft may begin again in the near future. Until 2020, the Russian Ministry of Defense plans to acquire up to X-NUMX aircraft An-10 "Ruslan", another 124 aircraft are ready to buy private airlines. In any case, Ukrainian and Russian companies will be able to make a profit from the resumption of production only if there are firm orders on more than 60 machines. Currently, this aircraft is one of the most popular in the air cargo market, which allows us to hope for the resumption of its release.

It would have been difficult to believe this, but a military transport aircraft, created in the USSR, today flies in the interests of NATO. Recently, the airlines of Russia and Ukraine won again a tender for strategic air transportation for NATO as part of the SALIS program. A joint application for participation in the NATO tender was filed on 4 on April 2012 of the Russian Volga-Dnepr Group and the Ukrainian state-owned enterprise Antonov. The capabilities of the combined An-124-100 heavy military transport aircraft fleet, as well as their modifications, were presented to the tender committee. 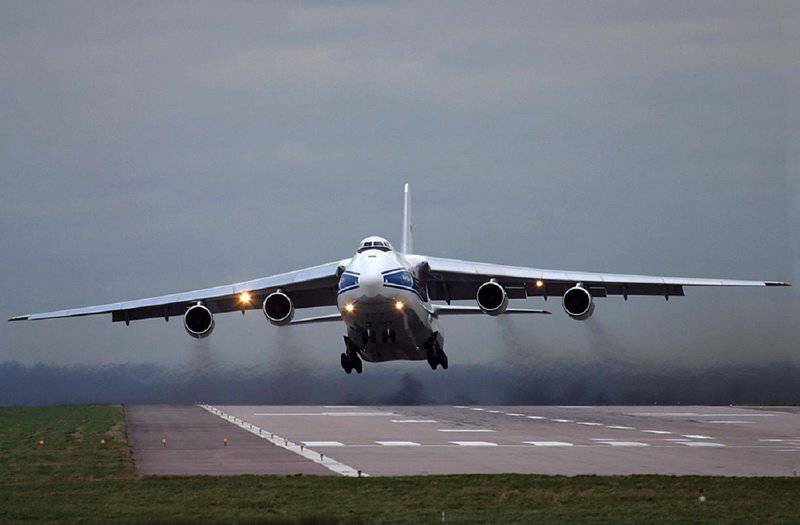 Thus, the aircraft An-124 "Ruslan" will continue to carry out transportation of goods in the interests of NATO. The Ukrainian-Russian alliance has previously performed shipments in the interests of the 18 member countries of this program. From March 2006 of the year until the application for participation in the tender, An-124 aircraft made more than 2 100 flights, delivering more than 120 thousand tons of cargo, both civilian and military, to various countries. The current contract will be valid until December 31 2012.

The fuselage of the An-124 cargo aircraft “Ruslan” has two decks, which are divided into specialized sealed compartments for ease of maintenance and operation. The cargo compartment is designed for the transport of goods and equipment. The upper front deck is designed to accommodate the main and replacement crew (7 people), as well as equipment. The upper rear deck is used to accommodate persons accompanying cargo and equipment. The nose and rear parts of the fuselage (reclining nose) are equipped with cargo hatches, which allow you to quickly and efficiently load and unload even non-standard cargo from two directions of your choice.

The cargo compartment of “Ruslana” is pressurized and supercharged, its length is 36,5 meters (without ramp - 26,5 meters), the width of the compartment is 6,4 meters, height - 4,4 meters, volume is more than 1000 cube. meters It provides transportation of cargo with a total weight of up to 120 tons, parachute landing of cargo with a total weight of up to 100 tons on special platforms, as well as equipment and cargoes that exclude the use of platforms. The cargo compartment floor is made of titanium alloy and allows loading of all types of non-self-propelled and self-propelled vehicles, both wheeled and tracked, with axle loads up to 12 (10) tons when placed in one (two) row. Roller equipment allows unloading and loading of monolithic loads weighing up to 50 tons. The use of boost allows you to carry up to 88 passengers in an airplane at an altitude of up to 8 000 meters without using oxygen equipment. 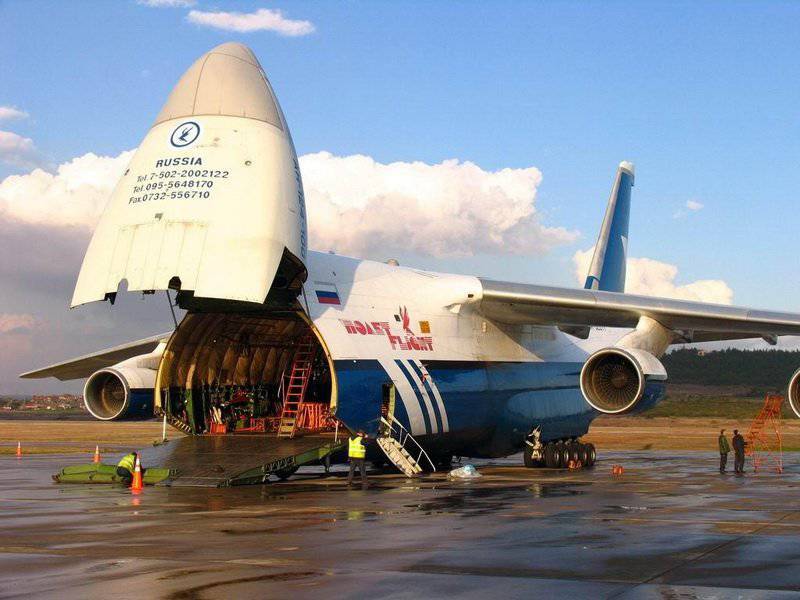 The multi-wheeled “Ruslana” chassis (24 wheels) with a squat system allows the aircraft to change the parking clearance, as well as the angle of inclination of the fuselage to reduce the angle of inclination of the ramps and facilitate the process of loading and unloading. Each main landing gear includes 5 independent two-wheel struts, the front support consists of two 2 wheel struts. The steering system of the front landing gear pillars allows the multi-ton machine to make a turn on the runway up to 50 meters when using engine thrust. To fully utilize all the combat capabilities of the aircraft, it needs a runway longer than 3 000 meters, but if necessary, the machine can fly even from unpaved runways.

The power plant "Ruslana" includes a X-NUMX turbojet engine D-4T designed by V. A. Lotarev (ZMKB Progress), each with 18 23 power. With sufficiently high power, these engines are characterized by a relatively small mass, as well as moderate fuel consumption and low noise. The maximum mass of fuel on the plane is limited to its take-off weight and is 400 213 kg.

The airborne equipment of the An-124 military transport aircraft is designed to carry out transport assault missions and to drive the aircraft in day and night conditions, in simple and complex meteorological conditions, and long-time separation from the main airfield, as well as in opposition from the enemy. The equipment of "Ruslan" includes an automated communications system (TYPE-15), a flight-navigation sighting system (PNPK-124) and a landing-transport equipment complex. Flight navigation system (PNPK-124) consists of radar stations of the earth’s surface and front view, autonomous navigation system, aviation radio compass (ARC), optical television viewfinder, altitude-speed parameters, near (“Omega”) and long-distance (“Laurent”) navigation, aircraft driving equipment in combat formations, an astronavigation system, and an aircraft identification system. A total of 34 individual computers were used in ship control systems. 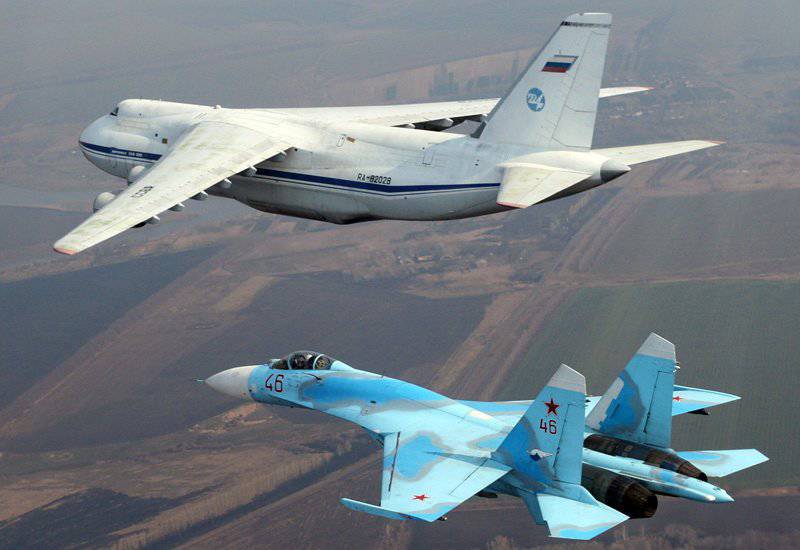 An-124-100М - A modified version of the aircraft with a crew of 4 people and foreign avionics. The aircraft has no world analogues in terms of maximum payload (100-120 tons), flight range and dimensions of the cargo compartment. In some cases, it can fly with a maximum payload of up to 150 tons. In this case, the decision on the flight is made after analyzing the characteristics of the aerodromes of take-off and landing, the availability of alternate aerodromes, as well as meteorological conditions along the entire flight route.

Currently, An-124-100 is operated by 6 airlines from Ukraine and Russia. The cost of this aircraft is estimated at about 70-100 million dollars. In 2000, the aircraft of Volga-Dnepr Airlines upgraded avionics (the Collins SAT-906 commercial satellite communications system, the TCAS-II airborne collision avoidance warning system, and the LTN-101 laser gyroscopes warning company Litton). The capacity of the side cranes was increased to 30 tons, and the crew was reduced to four people. Engine nacelles were equipped with sound-absorbing elements, which allowed the aircraft to comply with international requirements for sound noise

An-124-102 - a modification with a new information and control cockpit field as part of 3 people. 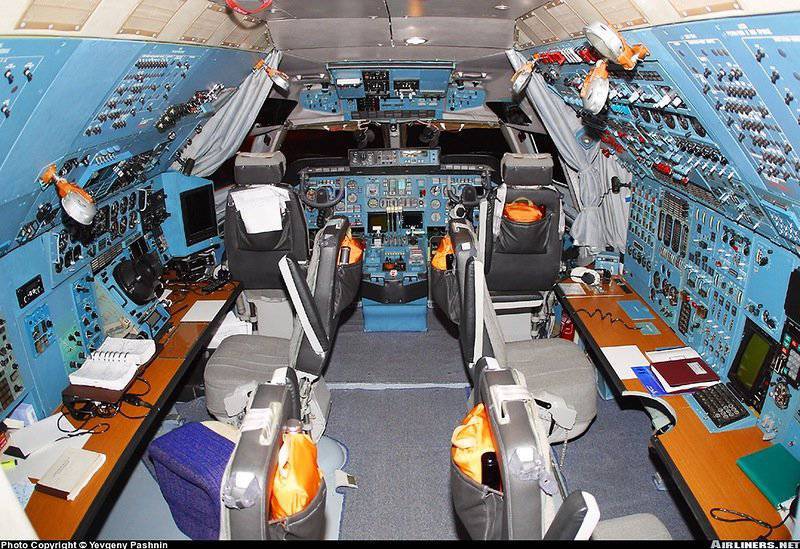 At present, Ruslan has firmly taken its place in a fairly small list of aircraft that not only performed well in the airline market, but also created a new sector in this market themselves. In the first 5 years since the commercial exploitation of Ruslan began, the average annual growth in air transportation of unique cargoes was 26%. The number of only US companies that resorted to the services of AN-124-100, doubled every 4 year. All of this was evidence of the huge commercial success of the aircraft on a global scale. AT stories Russian aviation had very few such examples. According to experts, at present, An-124 “Ruslan” is experiencing only its youth, the plane will be able to work even about 40-50 for years without any problems.